“The ‘kalars’ want to take our land,” said Aung Tun Hla, an ethnic Rakhine, using a pejorative term for the Rohingyas ethnic group.

“Before, the relations between the two communities were okay,” added the 48 year old, whose house in Sittwe, the state capital, was destroyed in the violence. “But now they want to quarrel with our people - they want to rape our women and burn our homes.”

Violence between Buddhists and Muslims in June and October 2012 left 167 dead and hundreds injured. At least 140,000 were displaced, the UN Office for the Coordination of Humanitarian Affairs (OCHA) recently reported. More than 10,000 homes and businesses were burned or destroyed.

According to most estimates, 95 percent of those displaced are Muslims, mostly Rohingyas. Under Burmese law, the Rohingya are de jure stateless. There are an estimated 800,000 Rohingya in Myanmar, and human rights groups say they have long faced persecution and discrimination.

The resentment felt by Rakhine Buddhists towards Rohingyas has made official steps towards reconciliation between the two communities - which are still largely separated by security forces - nearly impossible, and the prospects for displaced Rohingyas returning home appear dim.

Following last year’s violence, long-held prejudices against Rohingyas - and against Muslims and people of South Asian descent more generally - came to the fore.

Ho Than Hlaing, a journalist at Sittwe for Eleven, one of Myanmar’s largest-circulation newspapers, spoke to IRIN about his belief that Rohingyas have had a deleterious effect on Burmese society. Muslims have excessive numbers of children, and they are economically aggressive and want to colonize Buddhist land, he said, echoing prejudices voiced by many Buddhists across the country.

More than 100,000 Rohingyas were displaced in Myanmar's western Rakhine State following sectarian violence in June and October 2012. The vast majority of living in overcrowded camps like this one outside Sittwe 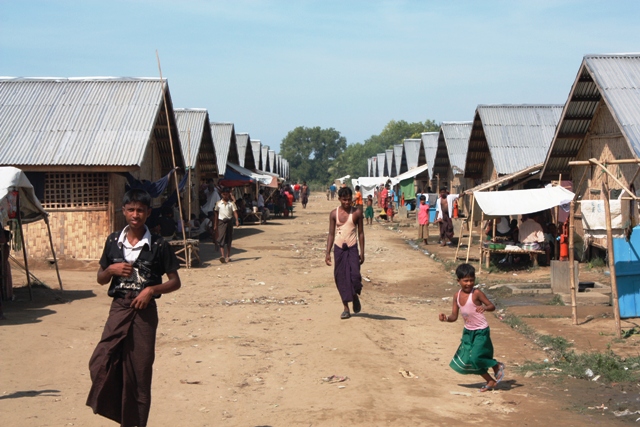 Meanwhile, monks could play a key role in shaping public attitudes towards reconciliation in this majority Buddhist majority nation, but few have taken a stand against the violence.

“Before, we lived together, ate together and worked together, but we cannot do this anymore,”said Ashin Ariya, the head monk of Shwezedi Monastery in Sittwe. “The Bengalis want to take the whole area and make everyone Muslim,” he said, referring to the Rohingyas as foreign immigrants - a line often used by Burmese government officials.

Public dialogue on the Rohingya issue has become so polarized that “it is hard to say anything and stay neutral,” said Tom Kramer, who runs the Myanmar office of the Transnational Institute (TI), a conflict-resolution NGO.

Views are reflexively interpreted as "pro-Rohingya or pro-Rakhine, with nothing in between,” he added.

Meanwhile, rights groups have criticized authorities’ lack of progress in helping Rohingyas return to their homes and livelihoods, and in some cases they have accused the government of complicity in the Rohingyas’ displacement.

“Instead of addressing the problem, Burma’s leaders seem intent on keeping the Rohingya segregated in camps rather than planning for them to return to their homes,” said Human Rights Watch, which has repeatedly called on the government to put forward a plan to bring the displaced home.

Any peace-building effort in Rakhine State will also require looking at the long-standing grievances of the Rakhine Buddhist majority itself, TI’s Kramer said. These include economic concerns that are separate from the sectarian tensions, but which create an environment ill-disposed to reconciliation.

Despite an abundance of natural resources, Rakhine is the second-poorest state in Myanmar, after Chin State, with widespread unemployment and poverty. It receives little development assistance from the government and, according to a the medical charity Médecins sans Frontières, has historically received less investment in health care than other areas of the country.

“The Rohingyas' problems have been so great that there hasn’t been time to look at the Rakhine Buddhists' grievances,” Kramer said.

Chief among these is the historic exploitation of Rakhine State’s resources by the central government, he said. Like many of Myanmar’s border regions, Rakhine’s natural resources were pillaged for decades by the country’s ruling military. The waters off Rakhine State are rich in natural gas, much of it destined for China through a pipeline scheduled to be completed this year.

Sustainable solutions will require a commitment by the central government to share the benefits of resource-extraction projects in the state, Kramer noted.

Local Rakhine residents dismantle and loot the site of a destroyed mosque in Sittwe in June 2012. Some 140,000 people were displaced by sectarian violence in Rakhine State in 2012 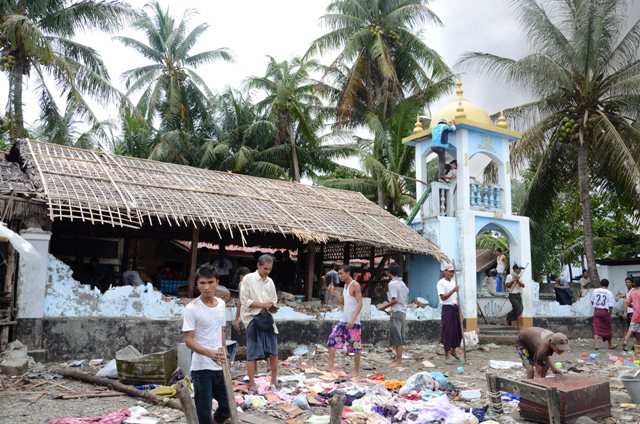 On 29 April, the Inquiry Commission on the Sectarian Violence in Rakhine State, a government commission set up to investigate the 2012 violence, recommended doubling the number of security forces in Rakhine State. It also called for the “temporary separation” of the two communities to continue.

“While keeping the two communities apart is not a long-term solution, it must be enforced at least until the overt emotions subside,” the 183-page report recommended.

Both communities highlighted the continued need for the deployment of the military in the region for safety and security, a summary of the much-delayed findings said.

The report went on to suggest family-planning education to address what it describes as the rapid growth of the Muslim population in the state.