Food has become expensive and seems set to stay that way, so growing more of it has become both a necessity and an attractive investment. But the trend has also put contentious issues like agricultural subsidies and genetically modified (GM) crops on the menu once again.

IRIN talked to some of the leading food security experts on the emerging issues highlighted in, among other new reports, the 2012 Global Food Policy Report by the International Food Policy Research Institute (IFPRI).

Countries like Malawi, caught in a trap of cyclical droughts, have provided subsidized fertilizer to boost food production but have come under attack for promoting unsustainable support to their farmers. “The position of donors on fertilizer subsidies is quite scandalous, given what is happening in their own countries,” says Peter Hazell, a leading agriculture expert who has worked with the World Bank and IFPRI.

A drought in the US and fluctuating food prices have led policy-makers there and in the European Union (EU) to rethink protection and support for their farmers.

The US Farm Bill governs agriculture policy and is updated every four years, but the 2008 legislation was extended to September 2013. The proposed bill recommends an expanded insurances programme with new crop insurance subsidies so farmers receive money when income from certain crops falls below a targeted level, and sets target prices for crops that trigger payments when revenues fall for several consecutive years at much higher levels than before.

"Perhaps the right lesson for Africa is not that subsidies are always bad, but that they need to be designed and implemented in more targeted ways"

The EU has done away with export subsidies that supported the disposal of surplus production abroad, but its EU Common Agriculture Policy ensures high levels of direct support to farmers and protects its own markets.

Jim French, policy advisor to Oxfam America, says the organization “does not object to a nation’s right to invest in and protect its agricultural interests”, but subsidies can “sometimes distort both the market and production in ways that impact global hunger and poverty rates”, and notes that some of the proposals in the new US Farm Bill “included moving back to subsidies“.

Agriculture expert Steve Wiggins, of the Overseas Development Institute (ODI), says if rich countries are providing subsidies, it does not mean poor countries should emulate their bad example.

He argues that subsidies in rich countries “do not prevent any African government from providing decent rural access roads, from funding research and extension, maintaining competitive exchange rates, and so on”. It is export subsidies that affect farmers in Africa, but poor countries can protect themselves from cheap imports by imposing tariffs.

Hazell points out that subsidies have helped countries like Malawi. “Perhaps the right lesson for Africa is not that subsidies are always bad, but that they need to be designed and implemented in more targeted ways that include a built-in exit strategy,” and address financial viability.

These developments have prompted experts and activists to call for reviving the stalled Doha round of talks at the World Trade Organization (WTO), which was to consider subsidies, tariffs and trade distortion in agriculture.

The US Congress adopted a clause in its 2013 agriculture budget bill that effectively bars the department of agriculture from any attempt to halt planting or harvesting a GM crop, even if the call comes from the judiciary, sparking outrage. India imposed a 10-year moratorium on field trials of GM crops in 2012.

Organizations like Greenpeace and activists worldwide welcomed India’s decision, but the IFPRI report describes it as a significant setback to food policy, and mainstream scientists argue that GM crops offer a way out of deepening food insecurity as growing conditions like the weather and water become compromised by climate change. IFPRI researchers P K Joshi and Devesh Roy note that the moratorium, "not based on scientific logic, will have negative effects on frontier research and demand-driven technology generation".

The adoption of the US clause, nicknamed the “Monsanto Protection Act”, was described by Greenpeace as a “sad day for democracy and the future of our food”. Mark Bittman, a food writer for the New York Times, cites interviews with the Union of Concerned Scientists stating that GM crops purported to be weed- and insect-resistant are actually failing.

There is no reliable proof that GM crops are harmful to human beings. “That’s not the same thing as saying that the potential isn’t there for novel proteins and other chemicals to generate unexpected problems,” Bittman writes, “which [is] why we need strict, effective testing and regulatory systems.”

The debate on GM crops is polarized between supporters and those who think it will have long-term impacts on biodiversity, possibly health, and lead to a takeover of food production by corporations like Monsanto. This has also been the case in Africa, where some countries have banned GM maize as food aid.

Per Pinstrup-Andersen, 2001 World Food Prize Laureate and the author of a book on the politics of GM food, described India’s moratorium as “nonsensical”, and said it “reduces India’s efforts to assure sustainable food security for its population”. He is among the mainstream scientists who prefer to be open-minded on GM technology and believe that while it might not be the panacea to climate-proof plants, it is a tool with some potential to ensure food security in the coming decades.

“The regulation of the use of improved crop varieties in the United States is best done by the relevant agencies within the federal government, and not by the judiciary,” he told IRIN. “Lack of understanding and insufficient knowledge among some judges are likely to result in erroneous decisions.”

Hazell, who also backs the mainstream view on GM technology, likens the current situation to the state of computer science in the early 1960s. “While the critics were still obsessed with problems of mainframe computers, the industry was busy developing laptop and portable computers that transformed not only the industry, but also the world. Let’s hope that something similar happens with the plant sciences, otherwise we are going to see a lot more famines and deforestation in the years ahead. None of this is to say that we don’t need sound biosafety regulation, but that should be based on science and national priorities, not driven by the misinformed anti-science views of a few international NGOs."

A new measure of productivity

Historically, farmers and countries alike have relied on yields to measure productivity, but in the past decade - total factor productivity (TFP) - which takes into account fixed factors like land, labour, capital, and the cost of direct inputs like fertilizers, has been gaining ground.

Families in the drought-affected Djoke village in Gorgol region, one of the three regions that form Mauritania's triangle of poverty pool their food reserves and eat together every day 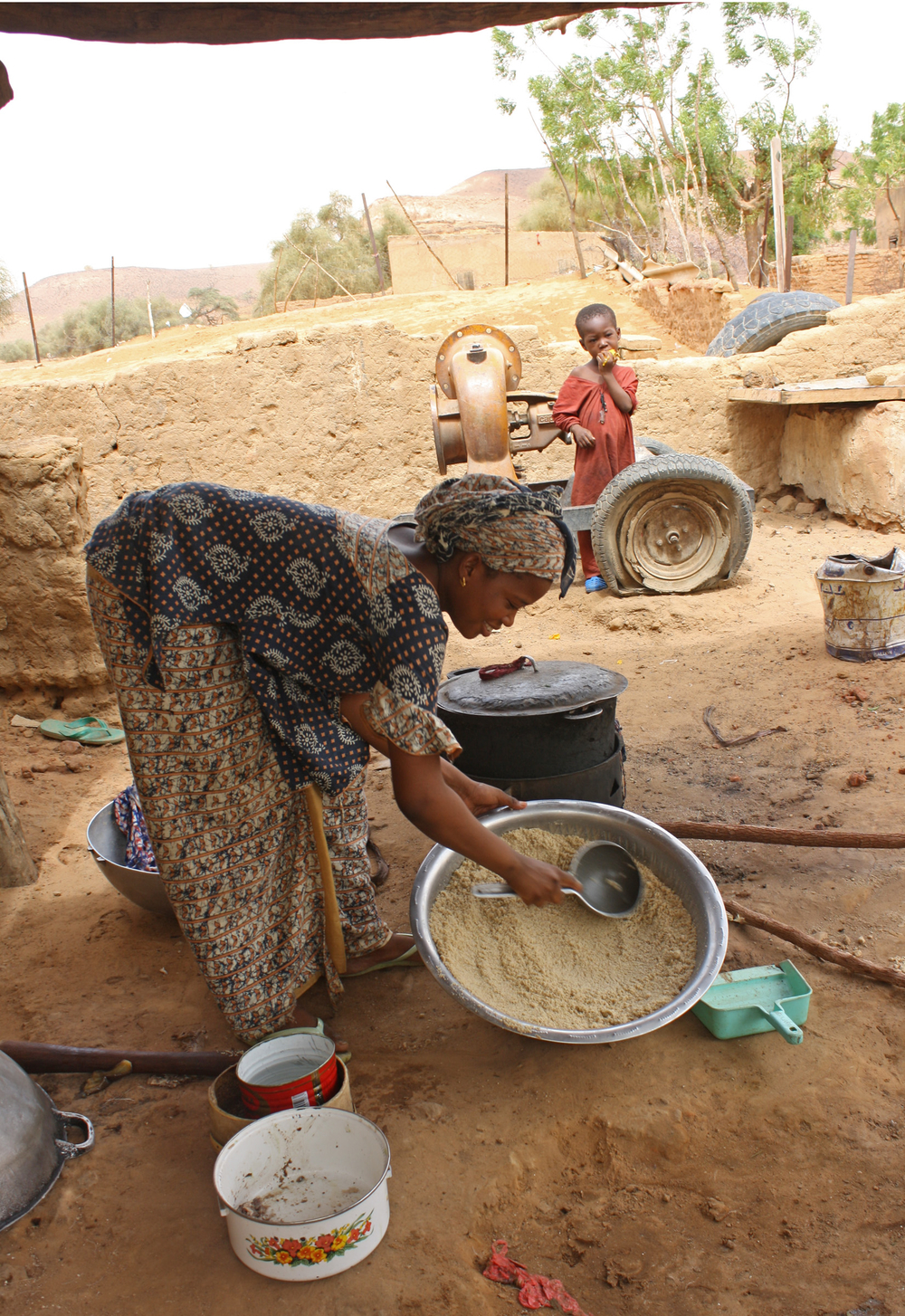 Alejandro Nin-Pratt of IFPRI says this method “is straightforward, as is the ratio of total output over total input, in other words, how much output is being produced by unit of total input.”

Hazell agrees that TFP “is a better measure… than yield, which just captures the productivity of land. TFP growth improves with new technologies and investments like irrigation that raise the returns to fixed factors.”

He points out that “one reason why farmers in Africa remain so poor is because agricultural growth there has been driven largely by increases in the cropped area and farm labour, with very little growth in TFP.“

FAO’s 2011 annual report focused on the role of women in agriculture, signalling a new trend. Since then, the US Agency for International Development, IFPRI, and the Oxford Poverty and Human Development Initiative have even developed an index to measure women’s empowerment in agriculture.

“The West makes gender equality an end in itself, and this can be counterproductive in many cultures,” Hazell says. “There is evidence that empowering women farmers, especially in Africa, is important… But this calls for practical and well-focused interventions that take account of local socioeconomic context, not for the construction of national gender empowerment indices that become goals in themselves.”

ODI’s Wiggins insists the goal should be, “All girls in school until they are 16, at least… taking care of children before 36 months, and making sure they are properly nourished.”

Ruth Meinzen-Dick, IFPRI senior research fellow, says there is a lack of rigorous evaluation of approaches that have worked to empower women in agriculture. They have launched a Gender, Agriculture and Assets Project (GAAP) to conduct assessments.