Last week, UN envoy for South Sudan David Shearer said fighting had “diminished greatly” since a September peace agreement. He may have spoken too soon. It has since emerged that clashes in the Equatoria region have displaced about 8,000 people internally and sent 5,000 more fleeing across the border into eastern Democratic Republic of Congo, which is in the midst of an Ebola outbreak. Most of the refugees and IDPs are women, children, and the elderly – many traumatised after they “witnessed violent incidents, including armed men reportedly murdering and raping civilians and looting villages," according to Babar Baloch, spokesman for the UN’s refugee agency, UNHCR. The clashes began last month between the army and the National Salvation Front, or NAS, one of more than 70 armed groups in South Sudan – and one that didn’t sign last year's accord. Five years of civil war have left 1.9 million South Sudanese internally displaced and 2.4 million living as refugees in neighbouring countries.

The World Bank and the International Federation of the Red Cross and Red Crescent Societies (IFRC) are among those competing with the UN's World Food Programme for a €500 million European Commission grant. The project supports 1.5 million refugees with cash allowances in Turkey. It’s the largest single humanitarian grant in the world, accounting for about 31 percent of the EC’s emergency aid budget. One of the issues will be indirect costs. A recent EC audit questioned the seven percent overhead fee paid to WFP (to be reduced to 6.5%), which ran the first phase of the project. WFP told IRIN it is following the financial rules set by its board, which includes EU member states. The Emergency Social Safety Net project is largely implemented by the Turkish Red Crescent. Its chief, Kerem Kinik, in a statement to IRIN, declined to back a bidder, saying his organisation "remains in promotion of an impactful and cost-efficient programme design".

The UN Panel of Experts on Yemen released its annual report to the public this week. It makes for grim reading on 2018, a period during which the country “continued its slide towards humanitarian and economic catastrophe”. In 224 pages, the group details “widespread violations of international humanitarian law and international human rights law by the various parties involved in the conflict”. Tip: For the group’s look at humanitarian assistance – including the Saudi Arabia-led coalition’s obstruction of civilian flights out of Sana’a, and the Houthi rebels’ arrest of aid workers and interference in the selection of aid beneficiaries – skip to page 56. In other Yemen news, the US House of Representatives passed a bill that would end the country’s support for the war. It still has to pass the Republican-controlled Senate, and President Donald Trump’s pen. If you’re confused, yes, last year a similar resolution failed in the House and passed in the Senate, but members have come and gone since then, and the resolution has changed too.

Counting the cost of internal displacement

People displaced within their own borders could be costing the global economy nearly $13 billion a year, according to new research by the Internal Displacement Monitoring Centre. Researchers assessed costs for eight countries experiencing conflicts or disasters, including Central African Republic, Libya, the Philippines, South Sudan, and Yemen. CAR was found to have the highest financial impact for each displaced person – about $230 million, or 11 percent of the country's GDP, per year. The research found that the highest burdens come from lost income, support for housing, and healthcare. People in low-income countries were also impacted worse than those in lower-middle or upper-middle income countries. Internal displacement "places a heavy burden on the economy," said Alexandra Bilak, director of the IDMC, "generating specific needs that must be paid for by those affected, their hosts, governments or aid providers". For more on how IDPs need greater protection, read this opinion we published earlier in the week.

Major donors and aid groups have made broad promises to “localise” aid – putting more power and funding in the hands of locals when crises hit. But change has been slow on the ground, to the frustration of many local NGOs, as we’ve documented in our continuing reporting on locally driven aid. So how can local and international groups make this all work? New research examines aid partnerships in four countries – Myanmar, Nepal, Nigeria, and South Sudan – to look at what kinds of practices might contribute to “localising” aid. There are the positives (locals participating in project design and budgeting), and the negatives (internationals taking credit for local work). But, unsurprisingly, most of the local humanitarians interviewed in the studies said existing partnerships between international and local organisations are not equitable – closer to the subcontracting that characterises many aid relationships. Yet genuine, long-term partnerships are seen as the most likely to accelerate “localisation” reforms. The ongoing research, which you can read here, comes from a consortium of NGOs including Action Aid, CAFOD, CARE, Christian Aid, Oxfam, and Tearfund.

‘I am free from the conflict, but I do not feel free’

The number of child soldiers around the world has more than doubled since 2012, according to Child Soldiers International’s analysis of six years of UN reports on children and armed conflict. The latest report verified 8,185 cases of child recruitment in 15 countries – a 159 percent rise on the 3,159 cases verified in 2012.

Co-produced by a former child soldier, a new project brings to life the voices of 27 children who were recruited into conflict in northern Uganda. There’s a taster below, but you can view the full comic here. 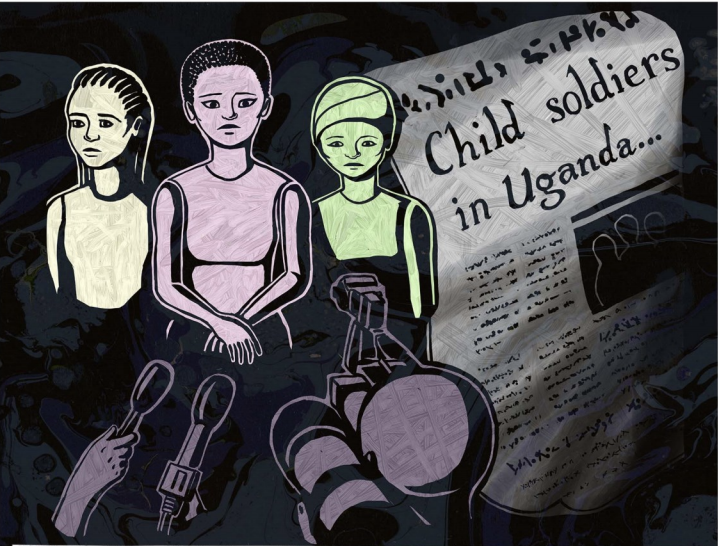 © YOLRED and courtesy of Jassi Sandhar (University of Bristol)

Germany: The German authorities have arrested two former officers of Bashar al-Assad’s secret service alleged to have tortured critics of the Syrian president. A third man is reported to have been arrested in France. Germany accepts the principle of universal jurisdiction, allowing its courts to try individuals accused of international crimes committed elsewhere – including war crimes, crimes against humanity, even genocide.

Haiti: After more than a week of protests over corruption amid soaring prices and inflation, President Jovenel Moïse finally broke his silence on Thursday, refusing to step down and urging patience. At least seven people have been killed during demonstrations sparked by anger at the government and the business elite over a $2 billion development aid scandal. More protests and street gunfire was reported in the capital, Port-au-Prince, after Moïse’s speech.

Kashmir: The deadliest militant attack to hit Indian-administered Kashmir in three decades killed at least 40 Indian paramilitary troops this week, raising tensions in a disputed region that has seen frequent civilian demonstrations against military abuses. The bomb blast was claimed by the Pakistan-based Jaish-e Mohammad, a banned Islamist group.

Myanmar: The military is shelling villages and blocking humanitarian access in Rakhine State, according to Amnesty International. Rights groups say some of the same army divisions involved in the violent 2017 ouster of 700,000 Rohingya – labelled as a likely genocide by UN investigators – are now being deployed in a crackdown on the ethnic Rakhine Arakan Army.

Sudan: Sudanese government forces have used "extreme violence and shocking abuses" against largely peaceful protesters, Human Rights Watch said, urging the UN to conduct an independent investigation into the violations. Activists estimate that more than 50 people have died since anti-government demonstrations began in mid-December, while at least 79 journalists have reportedly been arrested.

The new D-Day for Venezuela is 23 February. This is when opposition leader and self-declared interim president Juan Guaidó has said humanitarian aid will enter the country to alleviate the suffering of Venezuelans gripped by widespread shortages of food and medicine. Guaidó has urged the armed forces, who remain loyal to President Nicolás Maduro, to allow the aid in. But there’s no indication Maduro, whose presidency Guaidó denounces as illegitimate, intends to do any such thing. In our weekend read, journalist Paula Dupraz-Dobias unpicks the different strands of what has become an international aid stand-off, with aid agencies caught in the middle and uncertain what to do next. This briefing is essential reading as the showdown continues to obscure a humanitarian crisis that may be denied by Maduro, but shows no sign of letting up.

We recommend you check out this entry to the New York Times’ Lens blog, which features the work of photographer Wesaam al-Badry. Al-Badry and his family fled Iraq just before the Gulf War for Nebraska, and his photos beautifully document their life in the United States, warts and all. There are weddings, a prison release ankle monitor, and an Arabic-language American newspaper. “My family are not one dimensional characters in a refugee story,” al-Badry says. “They have multiple layers, they have their own personalities, their own agency and ways of manoeuvring through life.”

(TOP PHOTO: A child holds up a map in the Protection of Civilians site in Bor, South Sudan. CREDIT: JC McIlwaine​/UN Photo)