Here’s the IRIN team’s weekly take on humanitarian news, trends, and developments from around the globe.

The (ending) age of Aquarius

MSF’s Mediterranean rescue ship, Aquarius, has been at the centre of a series of diplomatic standoffs this summer as European governments refused to let it dock and disembark migrants and asylum seekers pulled from the waters off the coast of Libya. But its rescuing days could now be over after it had its flag revoked this week by Panama. The pressure appeared to come from Italy, whose populist government argues that such vessels only encourage migrants to attempt the dangerous crossing from North Africa, but which is also keen to stem arrivals after taking in more than 700,000 people since 2013. Matteo Salvini, the Italian interior minister, denied pressuring Panama (in a Tweet, he claimed he didn’t know the dialling code), but a statement from the Panama Maritime Authority suggested otherwise. “The main complaint comes from the Italian authorities,” it said. The boat, jointly operated with SOS Méditerranée, is the only NGO rescue boat still operating in the Mediterranean. Currently at sea carrying rescued migrants it faces “deflagging” when it next reaches port. Panama’s ship register says the Aquarius refuses to return people to their place of origin. But according to the UN, that would be against refugee law. Given worsening conditions in Libya, UNHCR has updated its legal position on bringing people back to Libya: it’s not “a place of safety for the purpose of disembarkation following rescue at sea.”

Sticking with Libya; yet another ceasefire appears to be in place in the capital, Tripoli, where fighting between rival militias this week killed 117 people and injured 581. This round of violence erupted 20 days after a previous UN-brokered truce agreement came into force, so forgive us for fearing it might not last. The impact on civilians extends beyond deaths and injuries: 1,700 families fled their homes to stay with relatives or sheltered in schools in just a few days, and others were trapped and unable to escape the violence. With power and water temporarily cut, migrants and refugees in the city’s detention centres had reportedly resorted to drinking toilet water. Sceptics say the UN-backed Government of National Accord, which sits in Tripoli, has no real control over the city’s armed groups.

A flood of AI announcements

“AI for good” announcements came thick and fast last week: Microsoft committed $40 million over five years to an “AI for Humanitarian Action” project. Examples of applications include damage assessment, an educational chatbot, and medical research. Google announced an AI-powered flood warning system, now in pilot mode in Patna state, India. The tech giants joined Amazon in a major new effort to better predict and prevent famine. The World Bank-UN-Red Cross-Silicon Valley coalition has broad ambitions, and getting clearer signals from a wealth of data using AI is part of it. Gimmick or gamechanger? You’ll be hearing more from us on this Famine Action Mechanism, FAM. If you have views, please get in touch.

Palliative care is focused on preventing and relieving suffering from life-limiting illnesses. But health advocates say it is frequently overlooked or ignored during humanitarian crises, when resources are stretched and large numbers of people are suddenly in need of basic aid like food and shelter. The World Health Organisation this month released its first guidelines on including palliative care in humanitarian responses. Integrating palliative care and pain relief into humanitarian response is a “medical and moral necessity”, according to the WHO. “The principles of humanitarianism and impartiality require that all patients receive care and should never be abandoned for any reason, even if they are dying,” the guidelines state. What might this actually look like on the ground, in the middle of an evolving emergency? Read our story about a local NGO bringing palliative care to the Rohingya refugee camps of southern Bangladesh.

Some reprieve for Uighurs

In a change of policy, Sweden will not deport Muslim minority Uighurs back to China. Germany announced the same in August. Sweden’s migration agency published a report describing repression in the largely Uighur Xinjiang region on 12 September. That followed a UN report alleging mass human rights abuse, including claims of a million Uighur people detained by the Chinese government, which it denies. Three quarters of about 5,500 Chinese asylum applications in Europe in 2017 were denied, according to EU statistics.

A masterclass in open source accountability

Uniformed men in Cameroon executed two women and their two children, apparently accused of involvement with the extremist Boko Haram group. Somehow, a video of the crime surfaced online. This compelling Twitter thread from BBC explains the forensic research by a network of journalists and NGOs, [including Emmanuel Freudenthal]. Using only open source tools, satellite imagery and online research, the team found the place, time and likely names of the culprits, who now face prosecution. Cameroon’s government had initially denied involvement.

One to look at:

The 1883 eruption of Indonesia’s Krakatau volcano was one of the deadliest eruptions in modern history – and the volcano is rumbling again. There have been ongoing eruptions at Anak Krakatau since June. But the volcano has had sporadic activity for decades and local authorities say there’s currently no immediate danger. NASA has released images showing unobstructed views of the volcano spewing volcanic ash and steam. 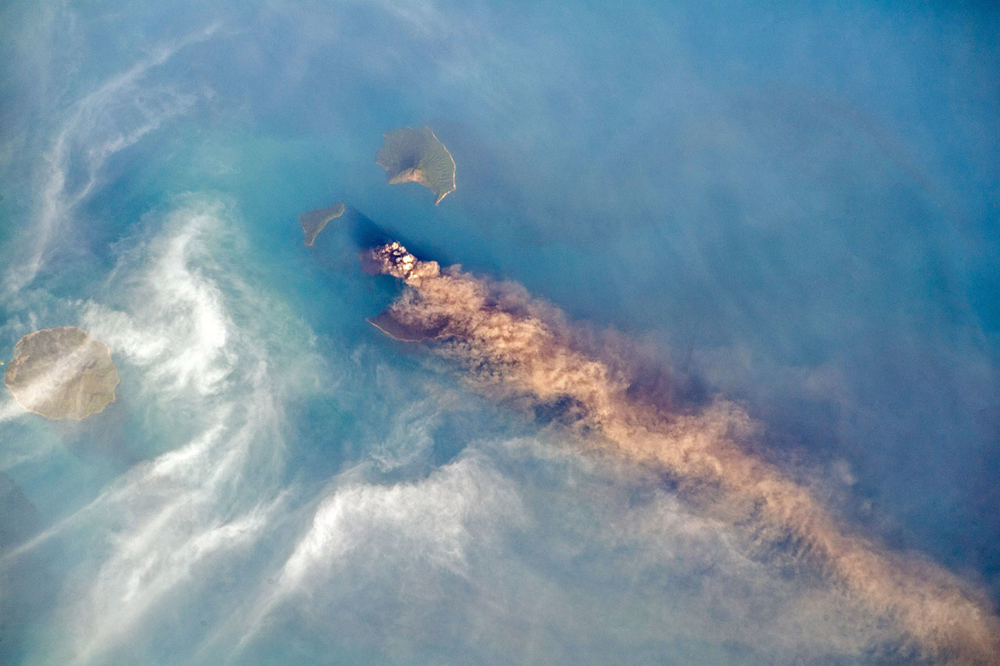 DEMOCRATIC REPUBLIC OF CONGO: The response to Congo’s latest outbreak has been “severely limited by security and other constraints,” according to the WHO, which has warned of a looming “perfect storm”. Last weekend, 18 people died in an attack on the emerging Ebola hotspot city of Beni. The current outbreak has killed at least 100 people, and there are now about 10 new infections a week, as local resistance to vaccination persists. One case has been confirmed on Congo’s border with Uganda.

GAZA: The World Bank is warning that the Gaza economy is in “free fall,” with foreign aid no longer enough to counteract the deterioration. A new report from the bank says every second person in the Palestinian territory lives beneath the poverty line, with unemployment at 53 percent, 70 percent for youth (15-24), and 78 percent for young women.

INDONESIA: Houses have reportedly been swept away and families are missing after a tsunami sent two-metre high waves crashing into the city of Palu on the Indonesian island of Sulawesi following a series of earthquakes, the strongest with a magnitude of 7.5.

IRAQ: Protests over a lack of public services and jobs are still going strong in Iraq’s southern city of Basra, where the main water source is polluted and there is no effective water treatment system. A new desalination plant is being built but workers had to leave because of the demonstrations, and the shooting death this week of human rights activist Suad al-Ali is only likely to add fan the flames.

JAPAN: Typhoon Trami is barrelling toward Japan – three weeks after Jebi, the strongest storm to hit the country in decades. Trami has slowed after clocking 260-kilometre per hour wind speeds earlier this week, but authorities in Japan are still warning the storm will be “very strong”. It’s expected to make landfall over the weekend.

SOUTH SUDAN: Fatalities since civil war broke out in 2013 have long been guesstimated at a vague “tens of thousands”. This week a statistical analysis by the London School of Hygiene & Tropical Medicine concluded that the conflict had in fact led to almost 400,000 deaths, half of them directly due to violence. But South Sudan watchers, including IRIN contributor Jason Patinkin, were quick to add a few caveats.

Shutdowns, suspensions, and legal threats put relief in the world’s troublespots at risk

Humanitarian responses in the most complex and hostile operating environments on the planet – think Somalia, Syria, Yemen – involve working with some fairly sketchy groups. Take Syria’s Idlib, for example. As much as 60 percent of the province is controlled by the al-Qaeda-linked extremist group Tahrir al-Sham. Inevitably, especially when working through a chain of local sub-contractors, some aid is going to go astray, or bribes will have to be paid and checkpoints bunged. But how much diversion is too much when civilian lives are at stake? This question is central to our weekend read, which reviews worries in the aid sector about an increasingly tought US stance on counter-terror compliance. This analysis follows a string of reports from IRIN Senior Editor Ben Parker exclusively highlighting NGO project suspensions and closures in Syria, recent prosecutions in US courts, and new strings attached to USAID funding. Adding fuel to the fire, a new report this week by USAID’s inspector general sets the scene for a much harder line on UN funding, which is largely exempt from the most stringent oversight.

This week, a French court convicted a humanitarian worker of criminal defamation for a tweet. Yes, you read that right. Loan Torondel, who volunteered and then worked for two years with L’Auberge des Migrants, a group that assists migrants and asylum seekers in Calais, tweeted a picture of two police officers standing over a man who looks to be a migrant, sitting on his sleeping bag. The man protests that the policeman wants to confiscate his sleeping bag in the cold, and in the text of Torondel’s tweet he ironically has one officer reply: “Maybe, but we are the French nation, sir.” The French nation bit refers to a comment President Emmanuel Macron made last year that was memed ad infinitum. For his own memeing Torondel (who is still on Twitter) received a suspended fine and was ordered to pay court costs. He is appealing, and rights defenders say his conviction sets a dangerous precedent and is a worrying escalation in harassment of aid workers by state officials.