Every Friday, IRIN’s team of specialist editors offers our take on humanitarian news, trends, and developments from around the globe.

Quick quiz question: In which country were the most people internally displaced in the first half of this year? Syria? Yemen? Congo? Wrong, wrong, wrong. The answer is Ethiopia, where less high-profile conflicts have been raging far from the media spotlight. According to the Internal Displacement Monitoring Centre’s mid-year report, 1.4 million Ethiopians were newly displaced between January and June. So what’s going on? Well, the two main areas of displacement are both in the south – one around the central zones of Gedeo and West Guji, the other farther east, where the country’s Somali and Oromia regions have been locked in a long border dispute. In both cases, inter-communal tensions are driven by competition over food, farmland, and other resources. But it’s not just about conflict, says IDMC Director Alexandra Bilak. As in other East African displacement hotspots like Somalia and Kenya, droughts and flooding linked to climate change also play their part, even if the science can get complicated.

People in Paraguay and Colombia are the most upbeat, a new survey of citizens in 145 countries claims. Polling firm Gallup’s annual Global Emotions Report scores positive and negative feelings. The firm asked 154,000* people about laughter, respect, rest, and mental stimulation on one end of the spectrum, and about their stress, anger, sadness, physical pain, and worry on the other. The Central African Republic broke a depressing record: it scored the most negative feelings of any country in 10 years of surveys, while in 2017 Afghanistan won another unhappy medal: the least positive feelings. Three “meh” countries – in which a significant proportion didn’t report strong feelings one way or another – include a surprising entry: Yemen, along with Belarus and Azerbaijan. A note of caution: the Gallup poll doesn’t include some countries facing profound political and humanitarian problems, including Burundi, North Korea, Somalia, and Sudan.

International justice in the spotlight

A UN-mandated rights probe made waves last month when it accused senior Myanmar military commanders of genocide, war crimes, and crimes against humanity in last year’s violent purge of Rohingya civilians in Rakhine State. On Tuesday, 18 Sept., the UN Human Rights Council is scheduled to discuss the investigation’s final report. The rights probe is calling for Myanmar’s top generals to be investigated and prosecuted at the International Criminal Court – or by an independent tribunal. Separately this week, the United States threatened sanctions against the war crimes court if it proceeds with investigations involving citizens of the US or its allies – a direct response to the prospects of an ICC investigation of alleged war crimes in Afghanistan, which could include examining actions taken by US forces. Like many foreign governments, the US has condemned violence against the Rohingya, and most rights groups see the ICC as the only avenue to international justice. Yet the US is now taking aim at the ICC for its actions on an unrelated issue. Could this affect the broader push for ICC investigations in Myanmar? Notably, the UN’s new human rights chief, Michelle Bachelet, this week called for a separate “international mechanism” to preserve and analyse evidence of possible atrocity crimes in Myanmar, which would complement any future ICC investigation.

The failure of US reconstruction efforts after the 2001 invasion of Afghanistan is a big factor behind the country’s present-day instability. This week, the Special Inspector General for Afghanistan Reconstruction, the US Congress-mandated watchdog, issued a scathing assessment of a $216-million USAID programme promoting gender equity in the country. Among its findings: only 55 women have benefitted from a key component meant to prepare women for jobs with the Afghan government. Read the report here. Meanwhile, UN Secretary-General António Guterres is scheduled to present his quarterly update on Afghanistan before the Security Council on Monday, 17 Sept. The key humanitarian problems have made frequent appearances here on the Cheat Sheet. Guterres’s report will be the last before parliamentary elections scheduled for 20 Oct. Already this year dozens of election-related attacks have caused hundreds of civilian casualties. 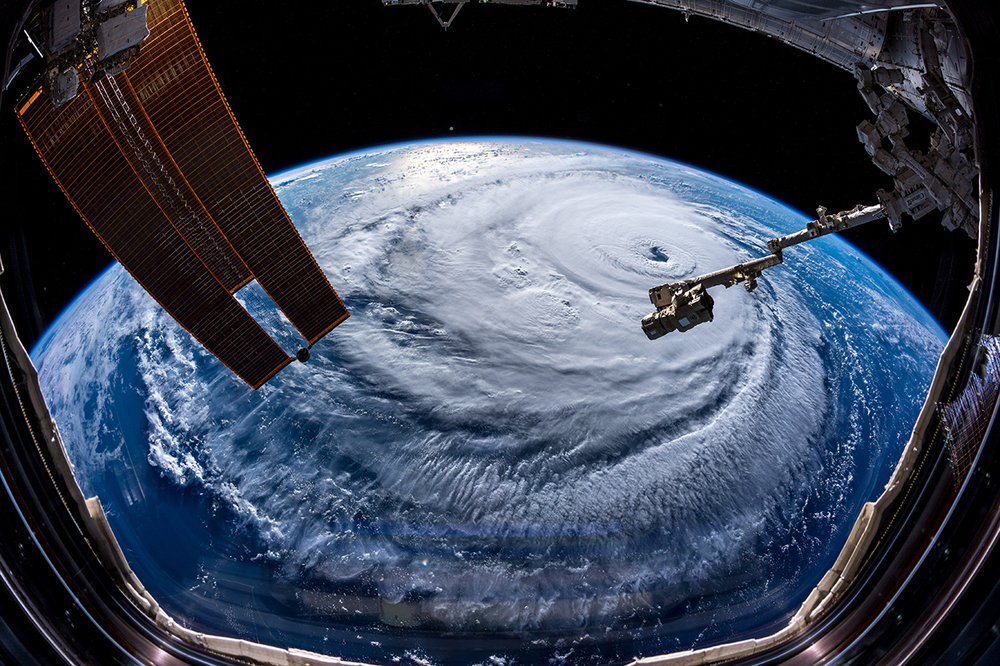 A. Gerst/ESA/NASA
Hurricane Florence from the International Space Station.

Hurricane Florence weakened to a Category-1 storm as it made landfall in North and South Carolina on Friday, but lesser wind speeds don’t necessarily mean lesser damage. The storm itself is moving slowly, meaning it could crawl through the area and unleash heavy extended rainfall, as did last year’s destructive Hurricane Harvey. A study published this year in the science journal Nature found evidence that tropical storm “translation speeds” have slowed by 10 percent since 1949 – meaning they linger longer when they strike land.

Typhoon Mangkhut is expected to hit the northern Philippine island of Luzon early on Saturday, 15 Sept., before veering on a path toward southern China and northern Vietnam. It’s the strongest storm to strike the Philippines this year; millions lie in its direct path and officials are bracing for heavy damages. Is it fair to compare media coverage of two separate disasters looming on either side of the globe? We attempted a tally of coverage on Hurricane Harvey and the South Asian floods last year.

GENEVA: A new report on food and nutrition says 672 million people (one in eight adults) are obese. About five percent of under fives are also overweight, says “The State of Food Security and Nutrition in the World 2018”, a UN publication released last week. Of 821 million hungry people, 62 percent are in Asia. After years of steady decline, the number of hungry people is on the rise since 2014, both in terms of percentage and absolute numbers. This, the study says, is due to instability, “adverse climate events”, and economic slowdowns.

KABUL: It’s not just war that uproots families in Afghanistan. This year, more people have been displaced by drought than conflict, according to UN tallies released this week. More than 275,000 Afghans have left their homes due to drought, compared to 220,000 pushed out by conflict. It’s indicative of Afghanistan’s complex displacement crisis, where IDPs, returned refugees, and victims of disaster all have overlapping humanitarian needs. Case in point: Our story this week from Iran, which threads a link between Iran’s plummeting economy, soaring deportations, and Afghanistan’s drought.

LONDON: Dhananjayan (Danny) Sriskandarajah will be the new chief of Oxfam’s GB unit, replacing Mark Goldring later this year. He takes the helm as the veteran development agency navigates its recovery from sex abuse and safeguarding scandals that have rocked public trust in Oxfam and the sector as a whole. The Sri Lankan-born Briton was formerly based in South Africa as the head of CIVICUS, an international alliance of civil society organisations.

PORT MORESBY: The polio outbreak in Papua New Guinea has reached the country’s capital, health officials have confirmed. We highlighted earlier transmissions last week. There have now been 12 confirmed polio cases this year. The World Health Organisation says the spread of polio to urban Port Moresby is “very worrisome”. PNG health authorities are planning emergency vaccinations in the capital beginning 24 Sept. The country was declared polio-free in 2000.

Don’t skim off the world’s most needy and think you can get away with it. That’s certainly one of the morals of this story. Our weekend read reveals the scale of procurement fraud involving cross-border aid from Turkey intended for Syrian refugees, as exposed by a USAID probe that named 20 firms and individuals. As IRIN’s Ben Parker reports, the corruption ring appears to have involved several Turkish companies and staff at several international NGOs. The Irish NGO GOAL has taken a big hit over the scandal, which led to the resignations of several senior staff and major donor diffidence. A former logistics officer at the Irish charity comes in for the biggest censure: a 10-year ban from doing business with the US government. The former Turkey country director of another NGO, the International Rescue Committee, is one of nine individuals debarred for five years. And a wider probe is ongoing.

Storm surge will be a huge factor for Hurricane #Florence Check out what it might look like with @TWCErikaNavarro: pic.twitter.com/TPqTZTmiAM

See above. An amazing-looking segment on The Weather Channel is going viral (and making other TV stations envious). As Hurricane Florence hits the US, the “Immersive Mixed Reality” video effect shows what a nine-foot storm surge is like projected alongside a live presenter. The channel is working with a partner, The Future Group, to develop eye-popping special effects. The productions are based on technology platform Unreal Engine, used in movie production and video games such as Fortnite.

(*An earlier version of this story incorrectly stated the number polled as 145,000)