Every Friday, IRIN’s team of specialist editors offers a curation of humanitarian news, trends, and developments from around the globe.

More than 30 years after coming to power as a rebel movement in the wake of the horrors of dictators Idi Amin and Milton Obote, Uganda’s ruling party still likes to portray itself as a champion of liberation from tyranny, and a guarantor of peace and stability. This message no longer cuts much ice with the country’s young population, 78 percent of whom, being under the age of 30, have known no president other than Yoweri Museveni. Deep-seated frustrations over unemployment, education, and Museveni’s bid to extend his rule indefinitely erupted into street protests after the 13 August arrest of pop singer-turned independent MP Robert Kyagulanyi, better known as Bobi Wine. Security forces violently put down the protests and on Thursday, Kyagulanyi was charged with treason, in apparent connection with the stoning of Museveni’s vehicle during a by-election campaign rally in the northwestern town of Arua. Kyagulanyi has claimed that the bullet that killed his own driver in Arua was meant for him. “Museveni established his rule as the antidote to the preceding political violence and chaos. The manifest violence of recent days has put an end to this image for good,” the African Arguments website declared on Thursday. All eyes on what happens next.

A year after then-president Barack Obama said the use of chemical weapons in Syria would be a “red line” for the United States, hundreds of people suffocated to death on 21 August 2013, foaming at the mouth, in the Damascus suburbs. UN investigators determined the victims had been exposed to sarin, delivered via surface-to-surface missiles. The UN did not assign blame, nor were its investigators asked to, but the White House and France said only the government of President Bashar al-Assad had the capability to carry out this sort of attack; al-Assad and his Russian allies blamed rebels. Five years later, the red line has been crossed multiple times, and the Syrian government appears to be readying for an offensive on Idlib and its surroundings, the last major rebel-held area of Syria. Britain, France, and the United States issued a joint statement on Tuesday’s grim anniversary, promising to “respond appropriately to any further use of chemical weapons by the Syrian regime,” mentioning the Idlib assault in their staid text. US national security advisor John Bolton took a more plain-spoken approach: "Just so there's no confusion here,” he said, “if the Syrian regime uses chemical weapons we will respond very strongly and they really ought to think about this a long time."

Regular readers of Cheat Sheet may recall that earlier this month we noted that dozens of people had been killed when the Saudi Arabian-led coalition hit a bus carrying children in Yemen’s northern Saada province. There was outrage from various corners of the world, the coalition said it was a “legitimate military action,” then later announced it would investigate. CNN has done some digging of its own, and found that the bomb was sold to Saudi Arabia by the US in a State Department approved transaction, and manufactured by none other than major defense contractor Lockheed Martin. The Pentagon declined to comment on the bomb’s provenance, but CNN traced back other bombs and civilian deaths in Yemen to Raytheon and General Dynamics. Then, in a display of how a PR move can backfire fast, Lockheed Martin put out a call on Twitter for “an amazing photo of one of our products”, to be featured for #WorldPhotoDay, 19 August. Users responded with pictures of the Saada bomb, and the blue UNICEF backpacks the victims had been wearing. The company’s original tweet? Deleted, natch.

Ghanaian Kofi Annan, former secretary-general of the United Nations, died on 18 August at the age of 80. The veteran diplomat, through his foundation and a peace and human rights group, “The Elders”, continued his diplomatic work after retiring from the UN 12 years ago, including recent stints on Syria, Myanmar, and Zimbabwe. His family described him as a “stubborn optimist”. Tributes praising his diplomatic skills, personal qualities, and demeanour continue to flow. Kenyan newspaper columnist Macharia Gaitho wrote of Annan’s mediation following contested elections and violence in 2008 “saving the nation from hell”. A more critical assessment came from American author Philip Gourevitch. Writing in the New Yorker, he referred to Annan’s reputation for “preternatural calm” but described him as having a “curious mixture of grandiosity and unaccountability”. Gourevitch claimed Annan never accepted appropriate personal or institutional responsibility, particularly on Rwanda. Annan was head of the UN’s peacekeeping department in 1994, when the UN did not stop or contain the Rwandan genocide in which hundreds of thousands were killed. On a lighter note, we recommend this story about him being mistaken for Morgan Freeman.

All we are asking…

The Central African Republic has only enjoyed intermittent let-ups in armed violence since a mainly-Muslim rebel coalition ousted president Francois Bozizé in 2013. As we reported in May, there is often little peace for the blue-helmeted troops of the UN mission there to keep. The killings and looting by the rebels five years ago prompted retaliation by a loose alliance of militia known as anti-Balaka that targeted Muslim civilians and led to charges of ethnic cleansing. The African Union has been leading a peace process, without making much progress. Now, armed groups in CAR have given the AU a lot to chew on: a list of 97 demands in return for peace. These include a blanket amnesty, restructuring the army, renegotiating military deals with Russia, and setting up a government of national unity. The country’s current government, which barely has any authority outside the capital, Bangui, has repeatedly rejected any preconditions for peace.

GAZA: Israel said that a man its forces shot dead in Gaza this week, after he shot and threw a grenade at soldiers, was a nurse for Médecins Sans Frontières. MSF confirmed the man, Hani Majdalawi, had been killed, adding that the aid group “is working to verify and understand the circumstances regarding this extremely serious incident, and is not able to comment further at this stage.”

INDIA: India’s Kerala state has been hit by what the Red Cross calls the worst flooding in a century, killing nearly 400 people and forcing one million to flee their homes. Reduced rainfall has allowed some of the displaced to go home, but most people remain in temporary camps, and aid groups say they’re worried about accessing remote areas, not to mention the damage to houses, agriculture, and infrastructure. The government of India has reportedly declined offers of cash from foreign countries, including the United Arab Emirates, Maldives, and Qatar.

UKRAINE: As Ukraine, today, holds its fifth Independence Day parade since the February 2014 Maidan revolution, the conflict in its eastern Donetsk and Luhansk regions shows no sign of abating. This week saw the heaviest clashes in months, with five Ukrainian soldiers added to the list of more than 10,000 people killed since Russia’s annexation of the Crimean Peninsula in April 2014.

VANUATU: Ambae used to be one of the Pacific Ocean republic of Vanuatu’s 65 inhabited islands. Not any more. As of last week, all 10,000 residents have been evacuated to the nearby islands of Maewo and Santo due to a volcanic eruption. As this evocative Guardian photo essay flags, this is second such mandatory evacuation in less than a year.

YEMEN: At least 26 civilians, including 22 children and four women, were reportedly killed in Yemen’s Hodeidah province Thursday night. Houthi rebels blamed an airstrike by the Saudi-led coalition, while United Arab Emirates state media said a Houthi ballistic missile attack had killed one civilian and injured dozens of others in the same area. 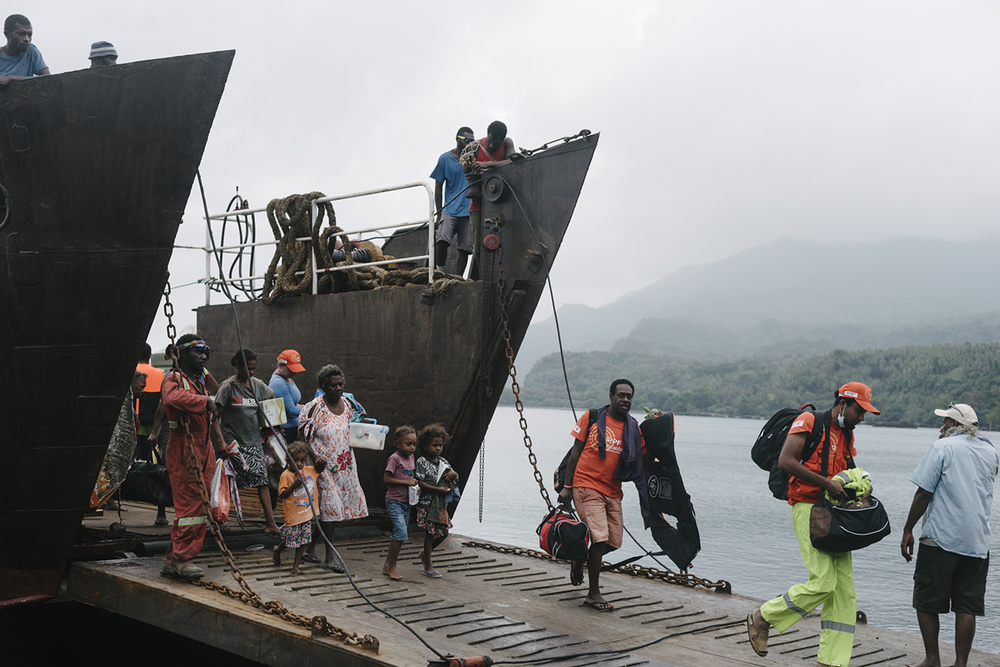 If the main item above didn’t make it clear enough, Syria’s Idlib is about to become major news, and not in a good way. A large, if complicated, humanitarian operation has been in place in northwest Syria for some time, but the scale of need is expected to go off the chart if and when the looming government offensive becomes a reality. That is what makes our weekend read this week so infuriating. Delving into USAID inspector general reports, IRIN’s Ben Parker discovered that a relief organisation had been caught diverting aid to rebel fighters in breach of US anti-terrorism laws. After trawling the likely suspects, Parker found out it was probably Catholic Relief Services, who confirmed they had “closed” operations in the region and dismissed staff. Analysts point out it is not just aid agencies but donors too who need to get real. Bad timing, bad optics, own goal.