What they didn’t say about Eastern Ghouta

If you’re looking for some grim reading this weekend, try the newly released 23-page report by the UN Commission of Inquiry on Syria on the long (more than five years) siege of Eastern Ghouta. It includes intimate descriptions of a life forced underground by aerial and ground attacks: doctors moving between shelters to care for patients, furniture and plastic burned in stoves until food nearly ran out, and a few shared toilets. The way pro-government forces conducted the siege was a crime against humanity, the report states, and rebel forces are also accused of war crimes for indiscriminate shelling. As dark as all that is, the report could (and maybe should) have been darker. What’s missing from the report are seven pages – an earlier draft was leaked to the New York Times – that contained gruesome details about chemical attacks in Eastern Ghouta and placed blame on the regime. A member of the commission said those bits were left out because they needed more corroboration. Perhaps, as the leak certainly suggests, there was dissension in the ranks?

South Sudan: “A missed opportunity to save lives”

Maybe you saw the photo: An awkward bear hug between South Sudan’s warring rivals as they met face-to-face in Ethiopia this week for the first time since 2016. But President Salva Kiir and rebel leader Riek Machar made little tangible progress towards resolving a civil war that has devastated the world’s newest nation for almost five years. The warning issued by Ethiopian Prime Minister Abiy Ahmed, as he coaxed the two leaders into that bear hug, that “each second and minute that passes with the business as usual is a missed opportunity to save lives,” seemed to fall on deaf ears. Tens of thousands of people have been killed in South Sudan and more than three million have fled their homes since the conflict broke out. And more than seven million lack sufficient food to live healthy lives, with conflict hampering the delivery of emergency aid. There are fears that famine may return to some parts of the country, with the eastern Pibor county, where floods and pests have ravaged crops, at particular risk. We’ll have more on this soon.

Dare we say it? A grassroots peace movement and an unprecedented (though temporary) Ramadan ceasefire have created rare space for, yes, cautious optimism in war-torn Afghanistan. The government has unilaterally extended a short-term ceasefire against the Taliban, and NATO forces say last week’s Eid al-Fitr truce – during which Taliban fighters and government soldiers posed for selfies – puts the country on the “edge of opportunity” for peace. So what’s the Taliban thinking around all this? A pair of studies released this week offer rare insight on the Taliban mindset. The United States Institute of Peace interviewed three dozen rank-and-file Taliban members, field commanders, and community members who support the Taliban cause to explore the group’s views on peace negotiations, trust (or lack of it), and what an acceptable peace deal might look like. Meanwhile, the Overseas Development Institute examined what life is like in areas under Taliban governance – and how Taliban influence on public services such as health and education can stretch to areas beyond its direct control. “Better understanding of how the Taliban govern, and what drives their policies, is essential for aid access, human rights advocacy and any future peace deal,” the report notes.

US child migrant separation: Do u care?

We were going to use this space to shout out the companies and employees who took a stand against the Trump administration’s policy of separating children and parents who enter the US southern border illegally, including several airlines that said they would not fly kids who had been split from their families. But here’s the thing: like half the internet (including the president), we’re having a hard time getting over what first lady Melania Trump wore on her way to a children’s shelter in Texas this week. The offending item was an army green jacket (Zara, if you must know) that said on the back “I really don’t care. Do u?” Her husband had already used an executive order to back off the policy when Melania made the ill-advised fashion choice, but critics point out his order doesn’t exactly amount to compassion. It appears that children may now be kept with their families in detention indefinitely. Hundreds of kids are still far from their families, and there’s no real system in place to reunite them. Which reminds us to remind you: next week is a big week for the International Organization for Migration, when the next director general will be elected here in Geneva. Before that happens next Friday, if you care about migration you might want to read our op-ed in which Jeremy Konyndyk asks whether a vote for Ken Isaacs – the White House nominee for the post, which is usually held by an American – is a vote of support for Trump’s migration policy.

How to add to PNG’s earthquake troubles

Add political unrest to Papua New Guinea’s quake-hit Southern Highlands Province, and the humanitarian crisis there only grows worse. The government recently declared a state of emergency there after protesters disputing a local election set fire to buildings in the provincial capital. The UN and aid groups have evacuated staff and suspended assistance in parts of the province, which was one of the hardest hit by a February earthquake. It’s the latest setback for response efforts to what the country’s ambassador to the UN this week called the “the most challenging humanitarian situation” in Papua New Guinea’s history. Aid groups say people displaced by the quake still need clean water, food, and shelter. But responders have struggled to reach remote communities across vast distances and difficult terrain. Read more? The surprise hotline helping quake survivors in Papua New Guinea

It's June, so it's raining humanitarian reports at the UN's annual humanitarian get-together, the Economic and Social Council's Humanitarian Affairs Segment. States, NGOs, agencies, and advocacy groups discussed policy and trends from finance to preventing sexual abuse. It wrapped up this week with a final communiqué.

Here's a partial list of the set-piece reports put out alongside those New York meetings:

The annual Global Humanitarian Assistance report tallied $27.3 billion in 2017 emergency flows, an increase of 3 percent on the year before. Only 0.4 percent went directly to local NGOs, a proportion that's barely budged despite calls for more aid to be "localised". Giving way to local groups is not just about money – some international NGOs also have committed to stop poaching staff, and set fairer terms for grant agreements, for example. An alliance of 34 international NGOs that have signed up to better localisation, Charter4Change, also issued its annual round-up.

Publish What You Fund, an advocacy group, issued its annual ranking of the data availability and transparency of major development agencies. The Asian Development Bank tops the list for the first time, followed by the UN Development Programme and the UK's Department for International Development. At the other end of the scale, aid donors China, United Arab Emirates, and Japan got "very poor" red cards.

Also this week, the UN put out a 40-page update on the global progress targets of the Sustainable Development Goals, with a chunky 127-page statistical annex. 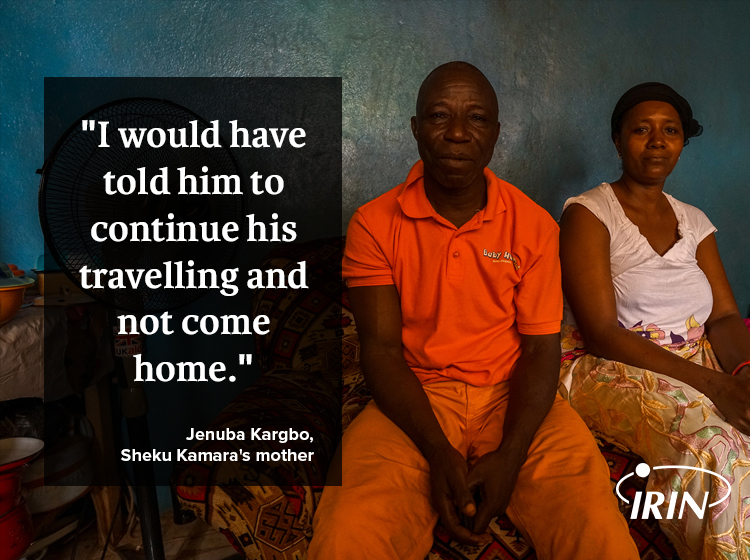 These numbers are familiar, especially after this week’s World Refugee Day, but it never hurts to be reminded of them: 68.5 million people around the globe have been forcibly displaced from their homes, including 25.4 million refugees, 40 million internally displaced people, and 3.1 million asylum seekers. The vast majority, some 85 percent, live in developing countries that receive little support.

Against those stark stats, the Aquarius boat fiasco, which we highlighted on last week’s Cheat Sheet, was just the latest example of how Europe is trying to close its doors to migrants and asylum seekers amid a rise in support for populist, xenophobic policies.

So, as EU leaders hold an emergency meeting in Brussels on Sunday to overhaul the EU's asylum system, this is the perfect weekend to start reading our two-month special series, “Destination Europe”, which gives the 360-degree view on how EU policies are impacting refugees and migrants from sub-Saharan Africa – putting a human face, as it were, on those start stats above. Susan Schulman gets the ball rolling by telling the stories of returnees to Sierra Leone who have given up on their dreams of Europe. They return penniless, often to families who no longer want them and see them as failures. In the coming instalments, Eric Reidy reports from Niger and France on the lucky few being evacuated from Libya and those stranded in the migrant hub of Agadez, and Tom Westcott provides the latest from inside the detention centres and coastal hubs of Libya where smuggling people to Europe is an ever-more desperate endeavour.

Working on a hygiene programme but stuck on how to translate “bathing cubicle”, “open defecation”, and “oral rehydration salt” between the five languages used in Bangladesh’s Rohingya refugee camps? There’s an app for that. Translators Without Borders have launched a glossary app for aid workers and interpreters working on water, sanitation, and hygiene programmes in the Rohingya camps. The glossary spells out 180 key terms across five languages: English, Bangla, Burmese, Chittagonian, and Rohingya. The nuances of language and communication continue to be an obstacle in the camps, and aid groups have been accused of not doing enough to listen to Rohingya refugees themselves. TWB says clear communication is especially important now during the monsoon season, when heavy rains will increase the risk of flooding and disease.

Heard of the #WorldCupofPeace? We hadn’t either, but Virgin Group founder Richard Branson (who admits he’s “never been much of a football fan”) is tweeting and doing interviews about a plan – backed by some major humanitarian organisations and, um, Peter Gabriel – for a truce in Syria to last the duration of the tournament. But we’re one week in, and while host country Russia (a belligerent in the war) is exceeding expectations on the pitch, there’s no ceasefire in sight.