Vanuatu: everyone off the island

Pacific Island nations are both extremely vulnerable to natural disasters and home to some of the most remote communities on the planet. The residents of tiny Ambae Island in the South Pacific nation of Vanuatu know this all too well: volcanic eruptions have spewed ash over the island and may force the entire population of 11,600 to permanently settle elsewhere. The eruption of Ambae’s Monaro Volcano led to the complete evacuation of the island last October. But weeks of new eruptions beginning in March triggered landslides and destroyed hundreds of homes, raising new risks for the population just months after most residents had returned. UNICEF says the ash has threatened water sources, forcing drinking water to be trucked daily to the entire island from the only two boreholes considered safe. Vanuatu’s government says the island is a disaster zone and has ordered a permanent relocation of all residents by mid-July. But the government says it has a $93-million shortfall for resettlement and needs help from donors. And everyone on Ambae Island may not agree with the relocation plan, which would send residents to separate communities on a nearby island.

Gaza: beyond the death toll

Israeli troops killed 60 Palestinians in Gaza on Monday, firing live ammunition, tear gas, and rubber bullets at ongoing protests dubbed the “Great March of Return”. At the start of the week, the demonstrations coincided with Ivanka Trump’s attending the controversial US embassy in Jerusalem – even People magazine noticed the incongruence of her grin. But protests actually began at the end of March. Since then, hospitals in the enclave have been struggling to cope; 102 deaths (including 12 children) and more than 12,600 injuries were recorded. Need a quick reminder of what life’s like for Gaza’s two million residents? The unemployment rate is 44 percent, the highest in the world; 90 percent of Gazans must buy water from private trucks because 95 percent of water extracted from beneath Gaza is unfit to drink; Gaza is in darkness 16 to 20 (and sometimes more) hours a day; and more than 23,500 people remain displaced from their homes since the war in 2014. Yup, there are plenty more grim figures where those came from. 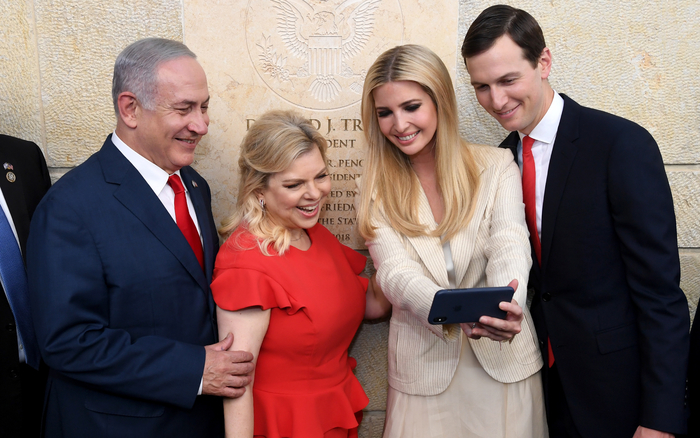 Ebola haemorrhagic fever isn’t new to the Democratic Republic of Congo; this is the ninth outbreak since 1976. But the deadly disease has entered what experts call a “new phase”, with one case confirmed in Mbandaka, capital of Equateur Province. The city is home to a million people and, worryingly, is connected by river to the capitals of DRC, Congo - Brazzaville, and the Central African Republic, where large, dense populations could help the disease spread. According to the health ministry by 17 May, there have been 25 deaths from 45 likely, suspected or confirmed cases.

An experimental vaccine now being distributed in Equateur offers some hope for containing the virus. Community alarm systems are another precaution, the International Federation of Red Cross and Red Crescent Societies says. Since it responded to all previous Ebola outbreaks in DRC, the local Red Cross has a robust network of experts across the country, said its president, Gregoire Mateso. “They are already in the communities and stand ready to expand awareness-raising, meticulous surveillance, infection control and prevention in areas that are at risk of further spread of the virus.” It goes without saying, but we’ll be keeping a close eye on this one.

Keeping a close eye on Burundi Thursday was another matter. Voters were deciding on constitutional amendments that, if passed, could see President Pierre Nkurunziza stay in office, with increased executive clout, until 2034, and dismantle an ethnic power-sharing arrangement agreed 18 years ago to end a civil war that claimed some 300,000 lives. Many foreign journalists have been denied visas and much of the local press has been muzzled. Large-scale violence in the near future is unlikely, according to the International Crisis Group, but “the regime’s repression, the potential demise of power sharing in Burundian institutions and the crumbling economy are harbingers of instability,” it said. Last week, 26 people were killed in an attack on the northwestern village of Cibitoke, but it was not clear whether the incident was linked to the referendum. Either way, Burundi is already in the midst of a humanitarian crisis, which, as we recently reported, could easily worsen in the current political climate.

He who pays the piper calls the tune, but when it comes to tackling violent extremism in Africa the results have been distinctly off-key. Forgive us for promoting an old friend, but this is the opinion of Obi Anyadike, who spent years reporting for IRIN in Africa before taking up a recent fellowship with the Open Society Foundations. In this timely podcast, which also features Kenyan-based researcher and regular IRIN contributor Nanjala Nyabola, Anyadike argues that militarising security policies tends to boost grievances against the state, abet insecurity, and foster corruption. Western funding priorities are partly to blame. “Now it's much more a security-driven agenda, which is about migration and about al-Qaeda or extremism," explained Anyadike. “The whole idea of creating democracy and all those good things, and good governance, that seems to have been a bygone age now."

Media outfits tie themselves in knots nowadays trying to measure their (nasty word alert) “impact”. Like everyone else, we sometimes feel like we’re shouting into a void, maybe getting a faint echo (chamber) back once in a while. Not this week. We published Sally Hayden’s deep dive into corruption in the UN refugee resettlement programme in Sudan, and readers – and the UNHCR – took note. Over the course of 10 months, Hayden interviewed more than a dozen refugees who alleged some kind of “pay-to-play” scheme was going on – bribes and kickbacks of thousands of dollars paid to middlemen, even UN workers, to jump the queue. There was no smoking gun, in the form of a paper trail or hard physical evidence, but Hayden’s persistence paid off as the UN’s refugee agency, UNHCR, referred the matter to its independent Inspector General’s Office. Then, two days after we published her exclusive, this from UNHCR: a temporary suspension of the Sudan operation to assure the programme’s integrity, along with the promise of “severe” consequences for anyone found guilty of wrongdoing.

Is what Hayden has uncovered just the tip of the iceberg? Help us find out. If you know of or suspect misconduct in refugee resettlement anywhere we want to hear from you. We promise to keep it confidential. IRIN Senior Editor Ben Parker is working with Hayden to follow up on fresh allegations – use Signal for secure chat to contact Ben (or email [email protected]). His Signal/WhatsApp number is +44 7808 791 267.

Kanye West has been stirring up more than his fair share of controversy lately (if you don’t know what we’re talking about, read the internet), but we are very much on board with his recent tweet of the UN’s Sustainable Development Goals. The UN is psyched to get some Kanye attention (check out this piece from NPR’s excellent health and development blog Goats and Soda), and you can get in on the act, too. Click here to check out global progress on the 17 lofty goals, which include ending poverty and achieving gender equality.

(TOP PHOTO: Logisticians of the World Health Organization (WHO) deploy the first protection and medical kits in DRC a year ago. CREDIT: Eugene Kabambi/OMS/RDC)