Every week, IRIN’s team of specialist editors curates a reading list of humanitarian trends and developments from around the globe.

Saudi Arabia’s Crown Prince Mohammed bin Salman (MBS, to those in the know) has been on a charm offensive in the United States this week, meeting with the president, business leaders, and sitting for an interview with network news stalwart 60 Minutes. We think a quick fact check is in order: Just before correspondent Norah O’Donnell put a question to the 32-year-old architect of the Saudi-led coalition’s three-year war in Yemen, she said in a voiceover that a blockade of Yemen’s port had been lifted. That’s not quite right. It’s true that some aid and commercial goods are allowed into the Red Sea port of Hodeidah, but only thanks to Saudi-granted 30-day extensions. Humanitarians say not enough aid is getting in, and the uncertainty is bad for private shipping. Yemen’s humanitarian crisis is so bad that next month the UN will ask donors to pony up $2.96 billion at a Geneva conference; last year’s ask was $2.1 billion. MBS’ response to O’Donnell? Houthi rebels are “using the humanitarian situation to their advantage in order to draw sympathy from the international community,” he said. “They block humanitarian aid in order to create famine and a humanitarian crisis.”

Aid groups face all sorts of headaches trying to get their jobs done. Many are physical, like bad roads or extreme weather. Others are security-related: Will armies, bandits, and rebels leave them alone? Some are administrative: Will authorities harass them with demands for permits and fees? Overall, this combination of factors amounts to "humanitarian access" – how hard is it to deliver help? A recent study of 37 countries shows that only in one, Congo-Brazzaville, did access improve since last August, thanks to fewer clashes in the Pool region. In Cameroon, Ethiopia, Libya, Mali, Myanmar, Pakistan, and Turkey things are worse. The report, by Geneva-based analysis group ACAPS, points to deregistration of NGOs in Pakistan, movement restrictions in Myanmar, and attacks on aid workers in Mali. Some places, like Eritrea and North Korea, were already bad for access, and have stayed that way. 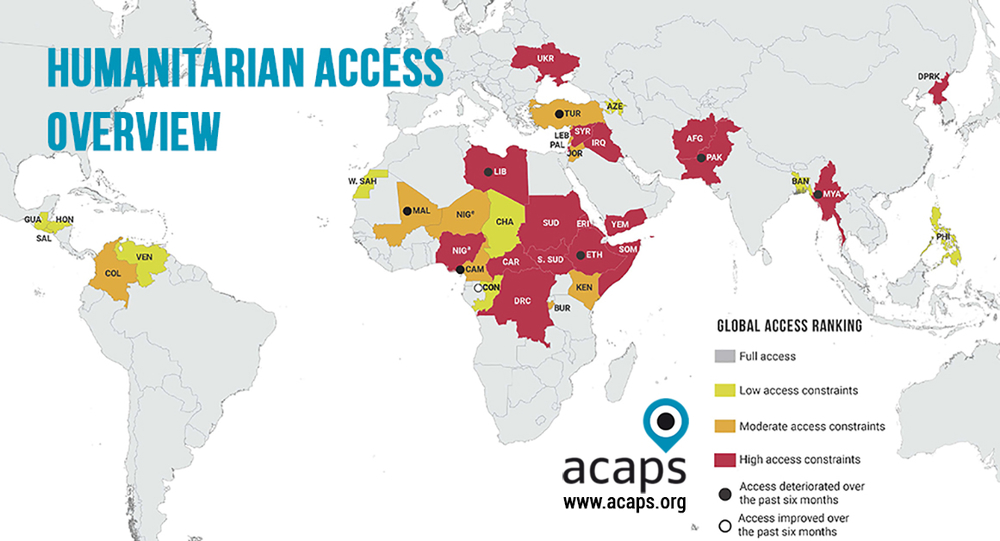 How best to help Venezuela, and the region

A stark situation report on Venezuela can be made by simply writing two lists. First, what’s gone: oil riches, economic control, the rule of law, press freedoms, credible health statistics, medications, food stocks, four million people. Second, what’s arrived in their place: repression, political prisoners, hyperinflation, 6,000% price rises, childhood malnutrition, eradicated diseases such as measles and diphtheria, violent crime, corruption, regional uncertainty. No one knows how bad this is going to get. Less than two months out from a presidential election the opposition already claims is rigged and plans to boycott, the country sits on the edge of a foreign debt default that could further plunge the economy down the tubes. What can be done? This International Crisis Group report contains a bunch of sensible-sounding recommendations, including more UN help, tougher sanctions, greater support for migrants from Venezuela’s neighbours etc. It is also premised, though, on President Nicolás Maduro allowing international humanitarian organisations into his country to alleviate suffering. Not everyone would agree that this is a good move. In his commentary for IRIN last month, leading observer Francisco Toro argued that relieving Maduro of such responsibilities without first forcing political change could amount to sticking a small plaster on a gaping wound. Venezuela’s neighbours however, as the ICG report rightly notes, can and should be helped right now; even as they tighten their borders, the sense that Venezuela’s situation has developed into a regional crisis is frighteningly real.

“A crime of solidarity”

You could be forgiven for not clocking this bizarre and dramatic migration story. Since EU and European nations have succeeded in bringing down numbers crossing the Mediterranean (and the Aegean), these stories don’t get as much play as they used to. But this maritime farce is important. It exposes the baffling stupidity of the current situation and serves as a warning of possibly far worse to come heading into the summer, the peak crossing period.

On 15 March, after being notified by the Italian coastguard, a rescue ship run by the Spanish charity Proactiva Open Arms rushed to the aid of two migrant vessels off the Libyan coast. Informed that the Libyan coastguard was in charge of the operation, the ship’s team carried on and rescued 216 migrants even though they say the Libyans threatened to open fire if they didn’t hand over “the women and children”. For two days, the now-outlawed Spanish ship couldn’t find anywhere that would let it dock. Eventually, it was allowed into Catania, Sicily, only for a prosecutor to order it seized while the crew are investigated for criminal association in illegal immigration. Madness? Surely so. But what lies at the heart of this is a raft of European agreements that have empowered the Libyan coastguard to intercept refugees and migrants at sea, including in international waters, and ferry them back to Libya. This recent Amnesty report accuses European governments of knowingly colluding in human rights abuses within Libya while blindly pursuing their overarching policy of restricting migrant flows into the Continent. Much more on this to come, but the quote from the lawyer representing the Spanish ship’s commander really says it all: "I guess they've instituted the crime of solidarity."

Fifteen years after setting up shop in Liberia, the UN’s peacekeeping mission there lowered its flag for the last time this week. It is expected to fully wind down operations by the end of March. The blue helmets arrived in 2003, in the wake of two civil wars that claimed some 250,000 lives. Since then the force has disarmed more than 100,000 former fighters, overseen three elections, helped hundreds of thousands of displaced civilians return to their homes, and played a big part in rebuilding the police and military. But the death of 202 UN forces in Liberia shows that the country’s security problems are far from over. “Many Liberians are still waiting for the anticipated dividends of peace,” deputy UN chief Amina J. Mohammed said in Monrovia this week. “Some of the root causes of conflict remain to be addressed.” The end of this month also brings another major, if unwelcome, landmark for Liberians, in this case those living in America, where a special immigration programme allows them to live and work. The programme expires on 31 March. The Trump administration’s recent phasing out of similar protections for several Central American states has left Liberians across the US anxious that it will soon be their turn to leave.

Much has been written (good and bad), much has been said (good and bad), since news broke that a Dutchman leading the work in Haiti of an international aid organisation (always named) had resigned for using prostitutes, amid screams of a cover-up. Entirely different stories emerged, centred on sexual abuse and assault, as the humanitarian sector grappled with its own #MeToo moment. Six weeks after the initial scandal erupted, IRIN took stock of the situation, holding an event with the Graduate Institute Geneva to establish what lessons should be learnt and where the sector should go from here. Accompanying it, this timely analysis from IRIN’s Ben Parker, who canvassed far and wide for additional opinions to help sort out fact from fiction and determine which reforms (think ombudsperson, humanitarian passports, Interpol checks) are realistic and which are pie in the sky.

If you missed the event itself, check it out here.