Although a seismic event, the death of Boko Haram leader Abubakar Shekau last month after his base was overrun by a rival jihadist group is unlikely to end an 11-year insurgency in northeastern Nigeria that has upended millions of lives, analysts and aid workers say.

Shekau, who led an uncompromising and brutal jihadist campaign, was cornered in his former Sambisa Forest stronghold in Borno State by rival fighters of the breakaway Islamic State of West Africa Province (ISWAP).

Although his body is yet to be recovered, both ISWAP and Boko Haram fighters have confirmed that he died after detonating his suicide vest.

Analysts say there’s now likely to be a period of instability within the jihadist movement as ISWAP hunts down any Boko Haram commanders who refuse to swear allegiance, before resuming its fight against government forces – hunkered down in garrison towns after being driven from much of the countryside.

Thanks to the arsenal of weapons it carted away from Shekau’s base, ISWAP will now be even better armed, and its ranks have been swollen by defections after as many as 18 Boko Haram commanders reportedly switched sides.

The violence in northeastern Nigeria has driven more than two million people off their farms, closed rural markets and businesses, and made travel on virtually all major roads in the region dangerous.

As food prices rise and the numbers of those in need grow, “we have reached a tipping point,” Christine Cool of the UN’s emergency aid coordination arm, OCHA, told The New Humanitarian.

Northeastern Nigeria is now in its lean season, the period before the next harvest, and an estimated 4.4 million people are facing critical food shortages, which “includes 775,000 people at extreme risk”, said Cool.

The last time northeast Nigeria reached that rate of hunger was in 2016/2017, when there were pockets of famine.

ISWAP has been on the offensive through the first quarter of this year, launching a series of attacks on garrison towns and the “humanitarian hubs” protected by the army, resulting in the suspension of aid deliveries to already desperate people – many of whom have been repeatedly displaced.

“ISWAP has been consistently hostile to relief agencies in the northeast and has had a record of targeting their facilities, abducting aid workers at humanitarian hubs and on highways, and killing some of them," said Nnamdi Obasi, Nigeria analyst for the International Crisis Group.

Dikwa, about 90 kilometres from the Borno State capital, Maiduguri, has been attacked at least four times this year. In March, aid workers were forced to hide in a newly built bunker as ISWAP fought its way into the hub, and then ransacked stores and offices – helped by the local population.

“It has been very tough just staying alive,” Laraba Salisu, a 27-year-old mother of three who lost her husband in a Boko Haram attack five years ago, and who fled ISWAP’s back-to-back attacks on Dikwa, told The New Humanitarian by phone. “It’s even tougher getting something to eat, especially if you lack money and means as we do.”

Change at the top

A few weeks before the raid on Shekau’s base, Abu Musab al-Barnawi was made interim leader of ISWAP. He was one of the key players behind the split with Shekau in 2016, condemning the Boko Haram leader for his indiscriminate violence, arguing instead that Muslim civilians should not be a target.

On 14 June, in a possible link to al-Barnawi’s new tenure, ISWAP released several humanitarian workers and civilians it had abducted.

It’s not known if any ransoms were paid by the Nigerian authorities or by aid agencies, and it’s also unclear if this represents a shift in policy by the new leader, ending a lucrative strategy adopted by his predecessor in 2018 that led to a slew of kidnappings. 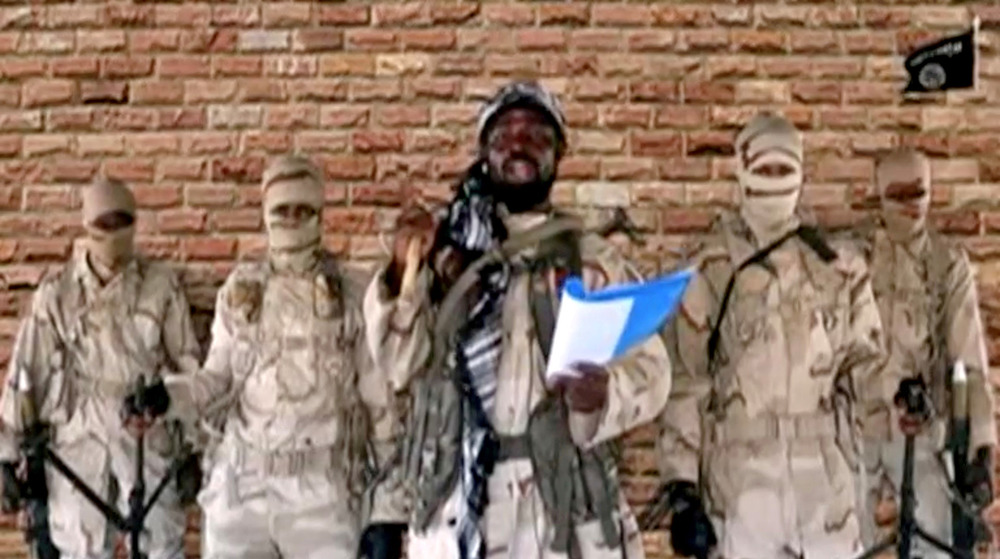 “[The releases] could be down to a combination of multiple factors,” said Murtala Abdullahi, a regional conflict reporter with Abuja-based online news service HumAngle. “It could be part of changes in the group's doctrine, or the need for financial resources at the moment, as he reconstructs the group.”

Either way, with the start of the conflict that has claimed around 36,000 lives approaching its twelfth anniversary in July, the humanitarian crisis in the northeast is only set to deepen.

The World Food Programme is again warning of a “famine risk”, with assessments showing “severe food consumption gaps” in hard-to-reach areas of Borno, as well as in neighbouring Yobe and Adamawa states, where the agency said some people have a “complete lack of access to livelihoods and farmland”.

Donors have only covered around 20 percent of the $1 billion humanitarian appeal, but there are also logistical hurdles to getting food aid to those in need.

To respond at scale, relief needs to move by road, which requires army escorts, but at the moment “the military doesn’t have a lot of capacity to do that”, said Cool.

Moreover, there are around one million people in the northeast living well beyond the reach of the government and aid agencies, especially in areas of northern Borno run by ISWAP.

Borno Governor Babagana Zulum is urging the dismantling of the displacement camps in Maiduguri and the return of people to their original homes – and has given safety guarantees. 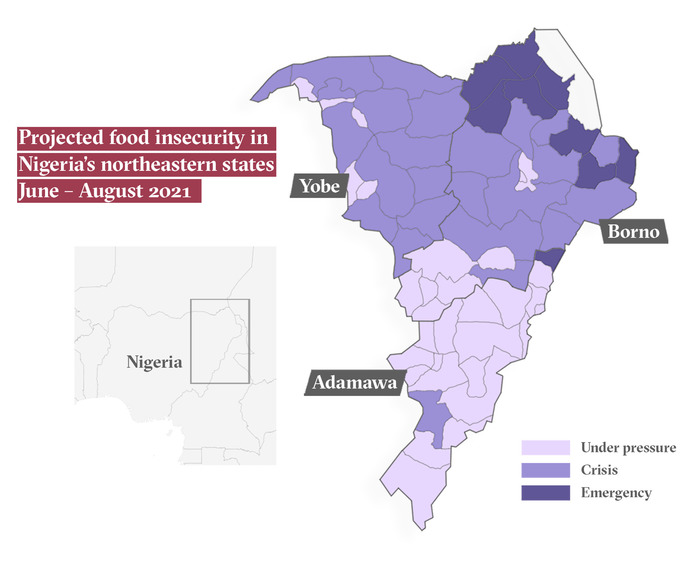 But in the case of Baga, 160 kilometres north of Maiduguri on the shores of Lake Chad, people who had taken the risk and packed up, “found their way back to the camps because they were not comfortable with the security situation there”, said Maurice Amollo, the director of Mercy Corps in Nigeria. “The security situation hasn’t improved enough.”

ISWAP, on the other hand, wants people to return, as part of its hearts and minds campaign.

It has developed its own rudimentary administration – based on an exchange of taxes for security and limited services – and through phone messages and word of mouth it is encouraging people to leave government-controlled areas to farm and trade in what it refers to as the Islamic “dawla”.

Militarily, the conflict in northeastern Nigeria is stalemated.

“There is no lasting humanitarian solution to what we are facing,” said Cool. “The only real solution is peace.”