A former army general with reformist credentials was sworn in as president of Burundi last month following the sudden death of Pierre Nkurunziza, whose extended and authoritarian rule set off a political crisis that caused hundreds of thousands of people to flee to neighbouring countries.

But the appointment of a new government that includes ruling party hardliners, and continuing accounts of violence and arrests of opposition supporters during the first few weeks of President Évariste Ndayishimiye’s administration, suggest the prospect of change remains slim in the East African country.

Several refugees who spoke to The New Humanitarian from underfunded camps in neighbouring Tanzania said they have no current plans to go back home – despite cuts to basic food rations, restrictions on their livelihoods, and periodic threats of forced repatriation.

“The majority think it is too much to make the decision to return,” said one refugee, who asked for his name to be withheld. “The death of Nkurunziza did not change anything.”

Ndayishimiye was due to take over from Nkurunziza in August after winning a presidential election in May marred by voter fraud allegations and violence. Nkurunziza was due to become the country’s “supreme guide of patriotism”, while enjoying a retirement villa and a $500,000 pension.

But the 55-year-old ex-president and ruling party stalwart died on 8 June – officially of cardiac arrest, though most suspect he had contracted COVID-19 – creating a sudden power vacuum that ended when the country’s constitutional court decided Ndayishimiye should take charge earlier than planned. 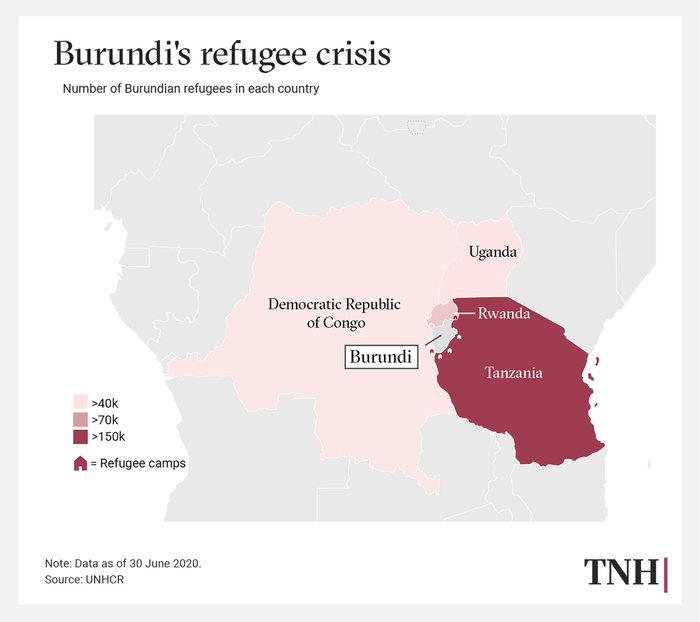 After 15 years as president – and many years before as a rebel leader – Nkurunziza will most likely be remembered for his final five years, when he won a third term in office that critics called unconstitutional. That power grab sparked mass protests, a failed coup, and a bloody crackdown that soon morphed into a humanitarian crisis.

Five years on, most refugees have not returned; relations with foreign governments and international institutions need mending; and the economy – in the doldrums since donors pulled bilateral assistance amid mounting rights violations – needs an urgent boost.

Hardliners at the helm

That Nkurunziza was willing to stand down at all shouldn’t be underestimated, said David Kiwuwa, an associate professor of international studies at the University of Nottingham. “Intra-party transitions – where a president from one party hands over to another from the same party – introduces the long-term possibility of change,” Kiwuwa said.

Ndayishimiye has a better human rights record than his peers, and some of his initial steps as president have shown promise: A new trimmed-down cabinet features five women and an ethnic minority Batwa politician for the first time, while COVID-19 has been declared Burundi’s “enemy” after Nkurunziza’s administration spent weeks downplaying it.

Some members of the ruling party’s feared youth wing – which has committed rights violations with impunity in recent years – have been arrested amid calls for the group, known as the Imbonerakure or “those who see far” in Kirundi, to show discipline and let security forces do their job.

But analysts caution that the new president did little to stop past rights violations from occurring, even while occupying various senior positions in the increasingly authoritarian ruling CNDD-FDD party – a former Hutu rebel group that never quite shed its wartime ways.

“The death of Nkurunziza did not change anything.”

Even if he does have some reformist intentions, Ndayishimiye will still have to juggle the interests of different CNDD-FDD factions, including the group of powerful military generals that supported his candidacy, and various hardliners who would have preferred somebody else at the helm.

“We should not expect spectacular reversals,” said Onesphore Sematumba, an analyst for the International Crisis Group. “Ndayishimiye is himself a product of the CNDD-FDD system and… must ensure the loyalty of the executives who were not necessarily in favour of his designation.”

Though Ndayishimiye’s inauguration speech paid lip service to the need for justice – others, including Ndirakobuca, have also spoken about tackling corruption – it contained plenty that would have satisfied party hardliners: from a pledge to "continue on the path" of his predecessor, to criticisms of those who fled the country and of the international community for meddling in Burundian affairs.

Rights defenders and journalists are, meanwhile, still behind bars, bodies are still turning up in rural areas and being buried before questions can be asked, and members of the main opposition party, the CNL, are still being arrested, albeit less frequently than before.

“Despite a reduction in violence, the same patterns of human rights violations that we've seen throughout the last years are still continuing,” said Thijs Van Laer, a researcher with the Burundi Human Rights Initiative.

Though further violence was expected following elections that Burundi’s main opposition leader, Agathon Rwasa, called a “fiasco”, the influential politician decided against calling his supporters onto the streets after the constitutional court rejected an appeal he lodged against the results.

In his inauguration speech, Ndayishimiye said “it is time” for dialogue with opposition groups, though previous efforts to mediate the Burundi crisis have all failed “because of the inflexibility of the Burundian government”, according to Sematumba, who added that there are few signs of a “shift in this posture”.

The new minister of foreign affairs, Albert Shingiro, recently said he would seek to “revitalise” diplomatic relations with other countries, while Rwandan President Paul Kagame said he is ready to work with Ndayishimiye after years of tensions between the two countries, which accuse each other of supporting their opponents.

Kamariza Immaculée, a teacher from central Burundi, said she hopes mending ties with foreign countries might kickstart the country’s tourism sector and tempt investors back to Burundi. “It has been almost an embargo for five years,” she said. “I don't think the new president can leave us locked up like this.”