Last week’s award recognised Abiy’s many accomplishments – the lifting of the country’s state of emergency, the release of thousands of political prisoners, the easing of media censorship, the legalisation of outlawed opposition groups, the tackling of corruption, and the promotion of women in politics.

But many challenges remain. Almost immediately after the Nobel announcement, a rally called to protest governance issues in Addis Ababa – due to have been held in the city’s main Meskel Square – was cancelled after the authorities declared it illegal.

In the ensuing clampdown, images of traffic held up at checkpoints around the city and along major roads to the capital went viral on social media, along with reports of arbitrary arrests.

Abiy’s whirlwind reforms have not gone down well with all Ethiopians, and the brash style of the energetic and charismatic 43-year-old politician has fuelled accusations from critics that he is developing a personality cult.

“People are getting frustrated that he is a showman,” said Dessalegn Channie, chair of the opposition National Movement of Amhara (NaMA). “He focuses on acts that have a public relationship impact.”

So, while many Ethiopians bask in the international recognition of Abiy’s achievements after just 18 months in power, others are less celebratory and more concerned about Ethiopia’s future.

Here are five of the main challenges confronting Abiy.

Peace not yet made

Abiy has played a crucial role in mediating disputes in the region – from Sudan’s transition away from military rule to a maritime spat between Kenya and Somalia – but securing peace with neighbouring Eritrea and within Ethiopia itself has proved more problematic.

The peace deal with Eritrea, ending a two-decade conflict, was initially celebrated as the border crossings opened between the two countries  – and was lauded by the Nobel Committee. But, today, the land border is once again closed and both governments have returned to a recalcitrant status quo.

About 175,000 Eritrean refugees are marooned in Ethiopia. Many live in one of four refugee camps dotted around the northern Tigray region that borders Eritrea, though a majority head to the cities in search of work – or a chance to head north to Sudan and the Mediterranean route to Europe.

Within Ethiopia, there are reports of frequent localised clashes across much of the country, though these are often hard to corroborate, while much goes unreported. Tensions are particularly high between the Somali and Oromia regions, while Tigray and Amhara continue to chaff over their shared border. 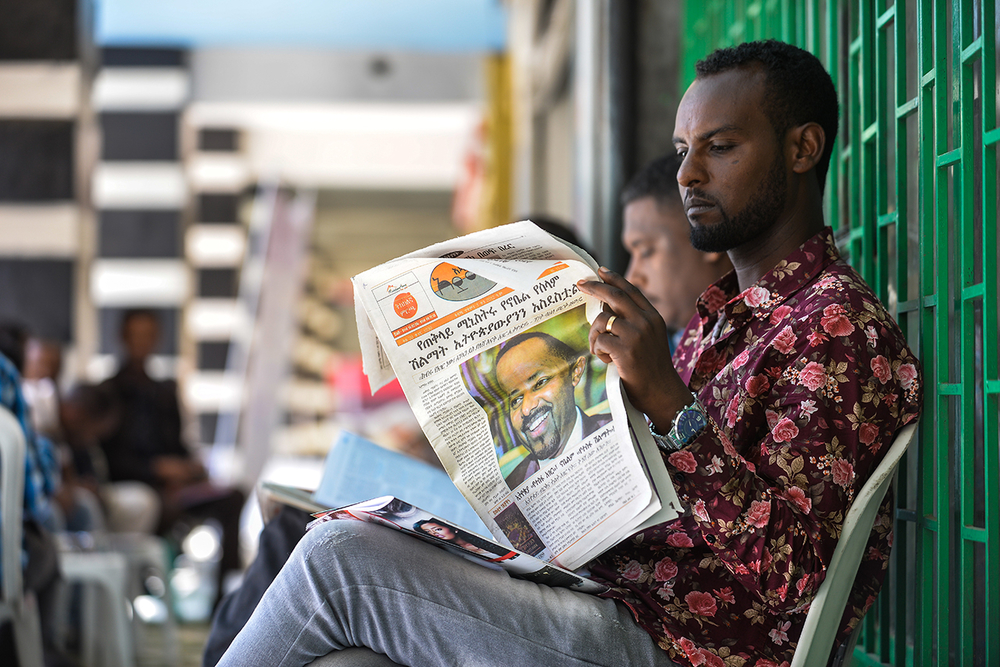 The growing pressure in Amhara exploded on 22 June with the killing of Amhara’s regional governor Ambachew Mekonnen – a close confidant of Abiy’s.

A few hours later, Ethiopia's army chief, General Seare Mekonnen, was shot dead by his bodyguard in the capital. The government claimed the killing was linked to the Amhara assassinations and was an attempted coup. This event proved a turning point as Abiy then took a harder line, said Dessalegn.

Security forces subsequently arrested hundreds of people, and the government pushback has not let up since.

Amnesty International has condemned the government for using anti-terrorism measures to conduct a “surge in the number of arrests”  – including journalists – since June.

“The use of Ethiopia’s anti-terrorism proclamation to arbitrarily arrest journalists is completely out of step with reforms witnessed in the country,” said Seif Magango, Amnesty International's deputy director for East Africa, the Horn and the Great Lakes. “This law must be revised to align with international standards and must no longer be used to harass journalists.”

In the aftermath of Abiy’s reforms – most of which were achieved within his first 100 days in office – some commentators are suggesting he moved too fast: especially in a large country whose political system is based on ethnic federalism to maintain harmony across nine regions that are home to more than 80 different ethnic groups.

“Changing a country planned on ethnicity will take a lot.”

“In Ethiopia, everything is based on ethnicity; it’s the first thing people think about – it is even on your ID card,” said Obang Metho, founder and executive director of The Solidarity Movement for a New Ethiopia, a local civic organisation that promotes dialogue to achieve change. “Ethnicity is anti-democratic by definition, as it excludes,” said Metho. “Changing a country planned on ethnicity will take a lot.”

The rapid pace of reforms, critics argue, has given breathing room to some of the ethnic-based ambitions that Abiy’s more repressive predecessors, such as Meles Zenawi, kept in check.

Increasing numbers of ethnic parties have emerged, many with an openly bigoted message. Some have played on historic grievances between the different ethnic groups and reignited territorial border disputes that have resulted in mass displacement.

During the first half of 2018, the number of internally displaced people grew to 1.4 million – with the largest number of new displacements of any country in the world – mainly due to clashes between Oromo and Somali in both the Oromia and Somali regions.

By the end of last year, after further clashes between the Oromo and Gedeo in Oromia’s West Guji zone, the IDP population had mushroomed to nearly 2.4 million. Some estimates put the figure closer to three million now.

“Armed groups are resorting to violence to take over local governments or to intimidate [other ethnicities] from settling in the same area,” said Dessalegn.

Broad rights of “self-determination” were ascribed to each group, including being able to secede from the arrangement if they felt their rights were being curtailed.

But the constitution was undermined by the Tigrayan People’s Liberation Front, which founded the ruling EPRDF party. Although Tigrayans make up less than six percent of the population, the TPLF dominated politics and pulled the strings of the economy and security services.

The current powerplay in Ethiopian politics leaves few ethnic groups happy. The Tigrayan old guard seethe at how they have been sidelined by Abiy’s reforms; the Amhara remember ruefully how they ruled Ethiopia for the longest period before the EPRDF came to power; and the Oromo lament that they have never held power, despite being the largest ethnic group in the country.

Abiy’s background from a mixed Christian-Muslim, Oromo-Amhara family – once seen as a positive – has not spared him criticism.

“Ethno-extremism and ethno-nationalism are on the rise in the country, but it doesn’t seem to be getting addressed enough,” said Metho.

Oromo protests have emboldened calls by many for an independent Oromia to break away from Ethiopia, while there has long been talk of Tigray independence.

At the same time, there are groups calling for intra-regional secession. This year has seen demonstrations by hundreds of thousands of ethnic Sidama demanding a referendum to determine regional status for their community, one of the largest ethnolinguistic groups in Ethiopia’s SNNPRS.

The Amhara – Ethiopia’s second largest ethnic group – split both ways. On the one hand, many Amhara have embraced a more potent form of Amharic nationalism. But there are Amhara who support a pan-Ethiopian nationalism, feeling strongly enough about maintaining Ethiopia’s integrity to be willing to defend it with force.

Since 2000, Ethiopia has undergone what some have called an economic miracle, with gross domestic product increasing on average almost 10 percent each year – although it has struggled to turn that into jobs and opportunities for Ethiopia’s large pool of unemployed youth.

Before Abiy came to power, the Ethiopian government’s economic policy was similar to the Chinese developmental state model, where the population was presumed willing to forgo certain civil liberties in return for economic growth and a reduction in poverty.

Abiy has turned that on its head. His government is now focusing on the indebtedness, injustice, inefficiency, and corruption embedded in Ethiopia’s growth that was largely fuelled by massive public works sustained by credit.

“The Abiy-era economic changes have been tied to momentous power shifts, so political perspectives have often clouded both positive and negative assessments of the switch in development strategy,” William Davison, International Crisis Group’s senior analyst for Ethiopia, told TNH.

At the same time, ongoing conflict risks frightening off foreign investors as well as impeding domestic production. Observers fear this is already reducing Ethiopia’s capacity to generate jobs and could potentially create a vicious cycle linking unrest and unemployment.

“The country cannot afford a sustained economic slowdown due to its poverty, bulging population – around 40 million people out of a total of 100 million are under 15 – and volatile political crisis,” Davison wrote in an article for Ethiopia Insight analysing the transition of Ethiopia’s economic policy under the new regime.

Shocks: Both natural and political

In the last decade, Ethiopia has experienced consecutive droughts attributed to the ocean-warming El Niño effect and the larger impact of climate heating.

In 2016, 10 million Ethiopians needed food aid, and then a similar number in 2017 after drought struck again.

Even if the weather proves favourable to Abiy, there is no avoiding the fact that next year is an all important election year, and the reforms he has initiated – opening the political space for opposition parties to operate – means he is in for a tough fight.

“If the elections are free and fair, the EPRDF is likely to be a huge loser,” predicted Desselagn. “Parties like ours have huge support now, which Abiy made possible. I think you will see a coalition government.”

How the elections play out – in particular whether they prove free and fair – could have a huge impact on the country’s stability and whether the best hopes of Abiy’s Nobel Peace Prize award can be realised.

“The award is a call not just for Abiy, but for all Ethiopians to take responsibility, not for their ethnicities and regions, but for the whole of Ethiopia and for our neighbours in the world,” said Metho.