This article is part of our in-depth coverage. Read more like this...
ADDIS ABABA

Ethiopia can’t seem to escape the blight of drought, no matter how hard it tries. Despite impressive economic growth and decades of capacity building, it faces another humanitarian crisis as one of the worst droughts in living memory scorches the Horn of Africa.

At the beginning of the year, 5.6 million Ethiopians were in need of food aid, primarily in the south and southeast of the country. That number recently jumped to 8.5 million.

An additional headache is that this year’s response by the government and international partners is proving less decisive than last year’s effort. In 2016, more than 10 million people were reached, food aid poured in, and the government spent hundreds of millions of its own money averting a major humanitarian catastrophe.

Why are the numbers in need increasing?

The January estimate of 5.6 million came from the government’s Humanitarian Requirements Document, an annual assessment in collaboration with international partners detailing Ethiopia’s humanitarian needs. The revised figure followed spring rains in April that petered out too soon, taking any hopes of revival with them.

“The situation is unprecedented,” said Sam Wood, Save the Children’s humanitarian director in Ethiopia. “That was the third failed rainy season in a row, so it’s a cumulative effect of failed rains hitting vulnerable communities.

“Ethiopia has made lots of progress, but when you have a problem of this sort of scale, duration and scope, any system is going to be overwhelmed.”

Adding to concerns is the chance the Hagaya/Deyr short rains (October to December), accounting for up to 35 percent of annual rainfall in the southeast, could prove a dud too due to the continuing El Niño effect.

The current humanitarian bill is $1.26 billion. So far only $334 million has been received. 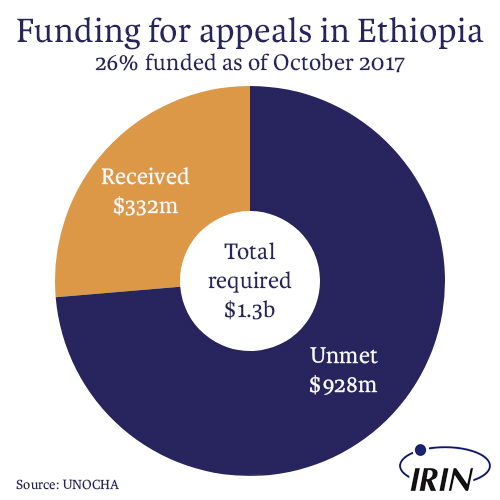 Why the cash shortfall?

At the beginning of the year, the UN warned that 20 million people were at risk of starvation in South Sudan, Somalia, Yemen, and northeast Nigeria.

“Aid budgets from donor countries have already committed most of their funding responding to other conflicts or disasters for this year, and this resulted in less funding for drought-affected people in Ethiopia,” said Geno Teofilo with the Norwegian Refugee Council.

“There is also donor fatigue regarding droughts in East Africa,” he added.

Others note how droughts don’t seize the public imagination to the same extent as disasters like earthquakes and hurricanes, meaning there’s less motivation to delve into one’s pockets.

“If we divert too many funds to humanitarian needs, it will be difficult to continue growth, so we have to request support from the international community.’’

What are the consequences on the ground?

Pastoralists in Ethiopia’s Somali Region, bearing the brunt of this drought, have lost hundreds of thousands of sheep, goats, and camels. Often whole flocks have died, representing a family’s entire livelihood, leaving people no choice but to retreat to makeshift settlements, surviving on aid from the government and international agencies.

A survey conducted by the International Organization for Migration between May and June 2017 identified 264 of these sites containing around 577,711 internally displaced persons, or IDPs.

Overwhelmed by numbers and additionally challenged by diminishing funds, aid agencies began cutting food rations and faced running out of money entirely this July, until last minute donations from Britain, the EU, and the United States guaranteed food shipments through to the end of the year.

At the same time, the World Food Programme was able to increase its humanitarian support from 1.7 million people to 3.3 million in the Somali region.

For now, deaths on a large scale have been limited to animals, though infant malnutrition rates are increasing to dangerous levels, accompanied by reports of cholera outbreaks.

How is the Ethiopian government handling the situation?

The government has faced accusations it played down the severity of the crisis to keep the country from looking bad internationally. It was too conscious, critics say, of protecting the narrative of Ethiopia’s remarkable economic renaissance over the last decade – one that has enticed foreign investors.

“Since 2015, we have been working with international aid agencies, making assessments together and disclosing the numbers of beneficiaries,” Kassa, the agriculture minister, hit back. “So, nothing can be hidden. The government has recognised how serious the situation is.”

Some aid workers in the Somali Region, however, have spoken about animosity between the federal government in Addis Ababa and the semi-autonomous regional government, resulting in a disconnect that has increased the risks faced by the vulnerable.

But even if national and regional governments were in perfect harmony, the logistical challenges would remain huge. The Somali Region is hot and arid, with few good roads and infrastructure, and has a significant nomadic population. That makes it harder for local and international aid agencies to conduct accurate assessments to ensure effective action.

What else is having an impact on the response?

Earlier this year, inter-community conflict broke out between ethnic Somali and Oromo in the Somali Region, resulting in dozens of deaths and more than 50,000 people displaced. It became unsafe for smaller aid agencies to move around.

On top of all this, Ethiopia hosts more than 838,000 refugees from Somalia, Sudan, South Sudan, Eritrea and other crisis-ridden countries.

Meanwhile, although the Ethiopian government felt confident enough to end a state of emergency earlier this year, following more than a year of political protests and bloodshed, discontent hasn’t disappeared. Grievances over land reallocation and ethnic federalism ­– both factors during recent clashes in the Somali Region – as well as government corruption, the lack of jobs, freedom of expression, and political transparency, all heave beneath the surface.

While both the United States and Britain  – two of the biggest donors – have continued supporting Ethiopia’s humanitarian needs so far, both their governments face continuing pressure to reduce overseas aid. US President Donald Trump’s 2018 budget blueprint promises to slash American contributions to international aid institutions, including the WFP.

Is climate change the real bogeyman?

Pastoralists in their seventies and eighties who have lived with frequent droughts say this one is the worst in their lifetimes – and they aren’t the only ones to notice.

“While working in Central America, East Africa, and the Middle East, I’ve always talked to elder people, especially those in agriculture, and the message from them is consistent,” Wood said. “Weather patterns are becoming less predictable and when rain comes it is too much or too little.”

When natural disasters strike, the situation of vulnerable populations can quickly deteriorate into a food and nutrition crisis.

The people leading the main aid organisations say the public must be kept aware of the drought, to try to keep money rolling in.

Yet even if resources can be found to cover this drought and its fallout, building capacity and livelihood security for the future is another matter entirely.

It can take pastoralists who have lost more than 40 percent of their animals more than seven years to rebuild flocks. As a result, international agencies and the government face having to restock flocks or provide pastoralists with new livelihoods – further stretching budgets.

Due to the increasing frequency of droughts, both the Ethiopian government and UN agencies are increasingly focusing on investing in strengthening people’s resilience.

“The government’s goal is to create climate resilience within the context of sustainable development,” said Kassa. “Then, one day, we will be able to deal with drought without any appeals.”

TOP PHOTO: Caught in a dust storm outside an IDP camp near Gode