Indonesian government restrictions on foreign aid workers in disaster-hit Sulawesi are forcing some humanitarian groups to rethink their response plans – and spurring a larger debate about how the aid sector prepares for crises around the world.

The government last week told international aid groups that foreign staff will not be allowed on the ground in Central Sulawesi Province, which was hit by 28 September earthquakes and a tsunami that washed away homes, destroyed entire neighbourhoods, and uprooted more than 80,000 people. More than 2,100 people are confirmed dead, and these numbers are set to rise with the government officially calling an end to search and rescue operations last Friday.

The regulations, which were first enforced during a separate earthquake that rattled the island of Lombok in August, have left some international aid groups scrambling to clarify the rules nearly three weeks after the Sulawesi response began. A staff member at an international NGO told IRIN that several agencies are meeting with government ministries to propose programmes and to gauge what will be allowed.

The government says restrictions on foreign staff are necessary to coordinate aid among the 85 international NGOs that have offered help. A spokesman for Indonesia’s foreign affairs ministry told media that without the regulations, “the presence of foreign aid workers, who have good intentions, may hamper the rescue and recovery work carried out by the national team”.

Officials say that foreign NGOs must apply for accreditation and work through local aid organisations, rather than sending expatriate staff to the quake-hit area around the provincial capital, Palu.

Many international groups are directing resources to local non-governmental organisations that have been on the ground since the emergency’s early days – either through long-standing partnerships or more recent arrangements spurred by the government regulations.

Yenni Suryani, the Indonesian country manager for Catholic Relief Services, said the organisation has applied for permission to bring in three temporary international staff members who will support its work with local organisations like the Muhammadiyah Disaster Management Centre and PKPU Human Initiative.

“We only have so much staff,” she said. “For this scale of response, I need more.”

Analysts see Indonesia’s regulations as evidence of a growing trend that is challenging long-held assumptions throughout the humanitarian sector.

“Gone are the days when you're going to have a humanitarian sector that comes into a disaster situation with a very heavy footprint and sets up as almost an auxiliary, or a replacement of government services.”

Christina Bennett, who heads the Humanitarian Policy Group at UK-based think tank ODI, said international donors and big NGOs have grown used to automatically jumping in when a major disaster hits, marshalling resources, supplies, and a brigade of global staff – and at times overtaking or overwhelming governments and local aid responders.

“I think there has been a lot of recognition in the past couple of years that that maybe isn't the best way,” Bennett said. “I think gone are the days when you're going to have a humanitarian sector that comes into a disaster situation with a very heavy footprint and sets up as almost an auxiliary, or a replacement of government services.”

If countries like Indonesia are increasingly exerting more control over disasters on their own soil, the global aid sector will be forced to rethink the way help is funded and delivered, said Kate Sutton, director of the Humanitarian Advisory Group, based in Melbourne.

“All the assumptions we make are being overturned: that visas will be given, [that] medical assistance teams will be welcomed,” she said.

This could mean relying more on regional expertise in disaster management. During the Sulawesi response, for example, the AHA Centre – part of ASEAN, the Southeast Asian inter-governmental body – has taken on coordination roles that are often dominated by United Nations agencies. It also means ramping up funding for local aid groups, Sutton said.

“If the only way that assistance is going to be provided is through those national and local organisations, then [international organisations] need to be investing a lot more in those partnerships prior to an emergency response,” Sutton said.

Dozens of the world’s largest donors and humanitarian groups have already pledged to shift more resources and power into the hands of local aid organisations and governments during disasters. But such commitments are often forgotten when major emergencies erupt.

International aid groups say their skills and resources can help leverage donor funding and amplify the local response. But governments are increasingly conscious of maintaining control. And local aid groups say they’re routinely sidelined and see a fraction of the funding that big NGOs enjoy.

Some of these dynamics are prevalent in Indonesia as the humanitarian sector navigates the government’s restrictions on foreign NGOs.

“We want to complement what the government does,” said one aid worker at an international NGO with experience responding to disasters in Indonesia. “We don’t want to take over. We don’t want to replace them. But we are painfully mindful of their limitations.”

Others say there’s little evidence an injection of foreign aid workers would have sped up the response in Central Sulawesi or elsewhere.

“In the first days and weeks of a crisis, it’s chaotic and it’s really difficult whatever the circumstances,” said Kate Sutton, director of the Humanitarian Advisory Group.

She remembers working in Indonesia’s Banda Aceh during the 2004 Indian Ocean tsunami, which killed an estimated 220,000 people, including roughly 160,000 in Indonesia.

“It was a chaotic response. Absolutely chaotic,” she said. “And very often having a plethora of international actors there can make it even more chaotic. I remember there were like 200 NGOs at a coordination meeting we were at in Banda Aceh. And trying to organise that vast number of different actors can add to the complexity.”

Some major international agencies are already registered in Indonesia as local NGOs. The US-based Mercy Corps, for example, operates as a local NGO in Indonesia. A spokesman told IRIN its entire team on the ground is Indonesian. Other major aid groups like Save the Children and World Vision also work through locally registered organisations – Yayasan Sayangi Tunas Cilik and Wahana Visi Indonesia, respectively.

For others, adapting to increased regulations would mean a more significant shift in thinking on how disasters are handled – and who may be best placed to respond.

“People are going to have to think a little bit more about their [human resources] capacity and their ability to hire national staff, rather than, as you might normally do, parachute in an international team,” said a staff member at an international NGO, who asked not to be identified.

‘We were all surprised’

Regulations on international aid workers aren’t new in Indonesia: the government already has limits on the number of foreign staff working at accredited NGOs in the country. But aid workers told IRIN that Indonesian authorities began preventing foreign NGO staff from working in disaster areas after the Lombok earthquake in August.

“We were all surprised and shocked,” said Yenni of Catholic Relief Services.

“Disasters, floods, and earthquakes happen all the time in Indonesia, and there are always organisations responding,” she said. “With Lombok, we were all surprised. To be honest, none of us really understand what’s the reason behind this.”

The difference now, many aid groups say, is that the scale of the damage in Sulawesi is more extensive. The World Bank estimates that economic damages from the Sulawesi earthquakes and tsunami could exceed $500 million – on top of the still-mounting death toll and loss of livelihoods.

“There is a concern among international agencies that maybe we don’t appreciate the real impact. Maybe we don’t have the exact figures. People have been literally swept away by the waves. Houses have been destroyed.”

Some fear that the full scope of the damage is unknown and may require more help than what’s available – particularly as the government is responding to the parallel emergency in Lombok.

“There is a concern among international agencies that maybe we don’t appreciate the real impact. Maybe we don’t have the exact figures,” said one aid worker. “People have been literally swept away by the waves. Houses have been destroyed.” 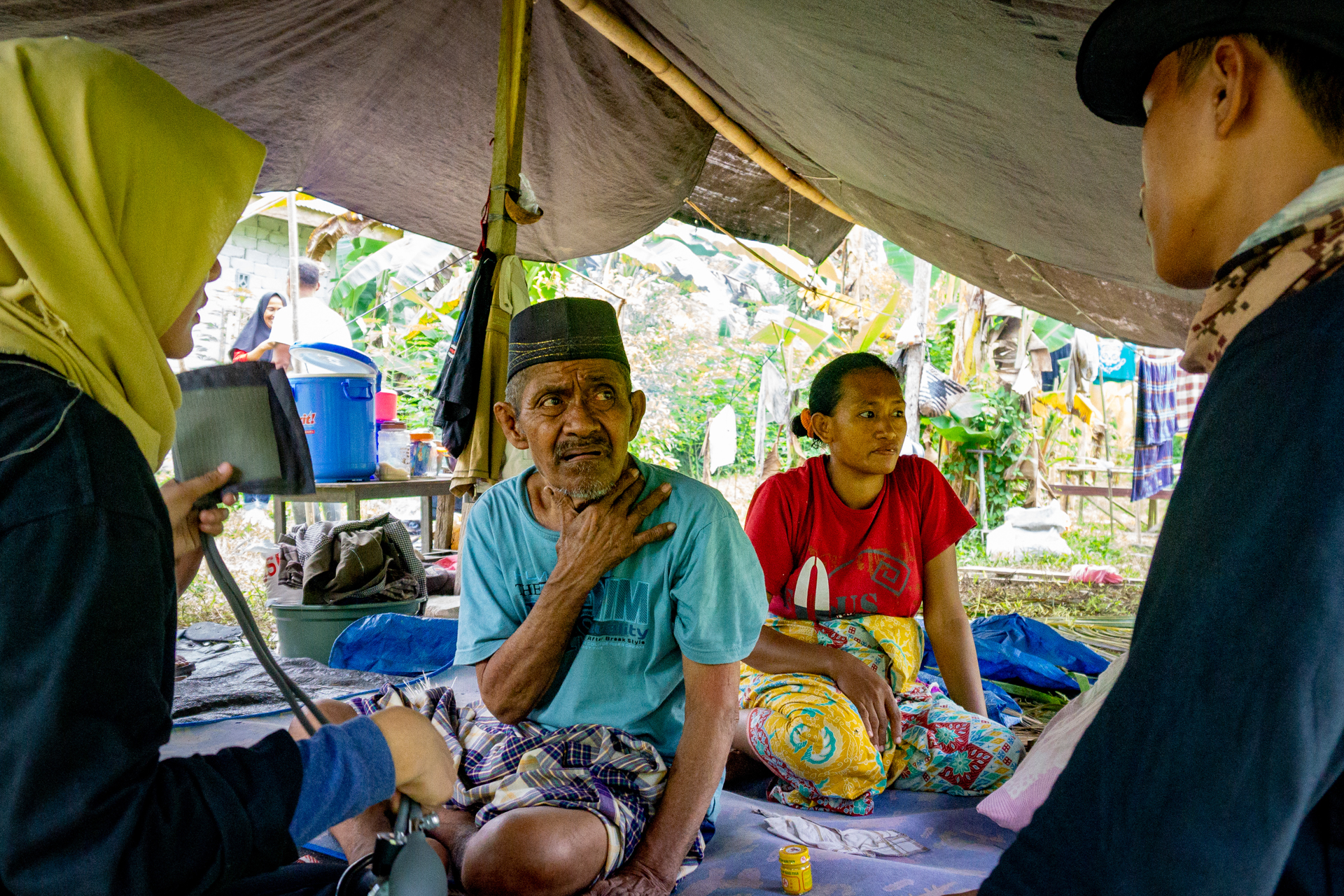 On the ground in quake-hit Sulawesi, some have criticised an official response that has struggled to deliver help to remote areas.

There are also fears the looming rainy season and inadequate sanitation could make matters worse in the coming weeks. The AHA Centre says there are shortages of supplies like tents, mosquito nets, and hygiene kits – basic supplies that the government specifically requested from international donors.

Aries Bira, head of the Central Sulawesi branch of Walhi, an Indonesian environmental organisation whose volunteers have brought food and water into disaster-affected areas, said he feared that the government’s directives on international aid could discourage donor support.

“The process of getting the required approval takes a long time, but the needs of disaster relief have to be fast,” he said.

Yenni, the Catholic Relief Services head, said she believes the government’s rules are aimed at regulating, rather than restricting aid work. But the lengthy application process, she said, has been “difficult”.

“Even for Indonesians like me, having support would really speed up the process of supporting the affected population, and accelerate the recovery,” she said. “And without support, yes, the government has resources, but how much and how far can they go?”

(TOP PHOTO: Wreckage and debris are seen at the quake-hit Petobo village in Palu on 11 October 2018. CREDIT: Olagondronk/AFP)