It’s 340 kilometres as the crow flies between the desert berm where 80,000 Syrians are trapped between Syria and Jordan, and the Jordanian Dead Sea resorts where last weekend the region’s elite mingled around finger food in conference rooms at the World Economic Forum Summit on the Middle East and North Africa. Zaatari Camp, where another 80,000 refugees live, is only 100 kilometres away.

From inside the WEF bubble, it all felt much further away, although humanitarian issues – including the plight of refugees – are now as much a part of the forum’s official agenda as the more traditional focus on economic growth. Among the royalty, bankers, and politicians gathered at the Dead Sea were the CEOs of major NGOs and the heads of UN agencies.

Despite external criticism and some of their own internal discomfort, more humanitarians are engaging with the World Economic Forum than ever before and see such spaces as critical for solving today’s complex crises.

The participation of humanitarians in Davos – WEF’s flagship event – and the forum in general, has not gone unquestioned. IRIN was criticised, semi-jokingly, by one of its own columnists no-less, for heading to Davos this year. And shortly after Peter Maurer, president of the International Committee of the Red Cross, joined the WEF Foundation’s board in 2014, he was asked by a former ICRC president if he really should be on the board of an organisation that claims arms manufacturers among its members. Should Maurer hold both positions simultaneously? Would it not damage the ICRC’s positioning as a neutral actor?

“It is of critical importance to talk to all stakeholders of conflicts,” was Maurer’s response, at a 2015 Geneva event. “There are 100 reasons to engage with the private sector on a platform where the private sector meets…  Just as we talk to all parties to conflict, we should speak to parties who may fuel conflicts or who may be able to defuse conflicts.”

While some aid bosses quietly confessed to IRIN some unease last weekend in stepping out of their khakis to rub shoulders with some of the world’s wealthiest individuals, most lined up strongly behind Maurer, arguing that it is important for humanitarians to have a seat at the table if they are to get anything done.

“I do think you reach a point where, in order to accomplish what you think is the right thing to do, you are as comfortable in your field clothes…  as you are in your non-field clothes,” Mercy Corps CEO Neal Keny-Guyer told IRIN, nattily clad in a blue blazer and purple-patterned pocket square. 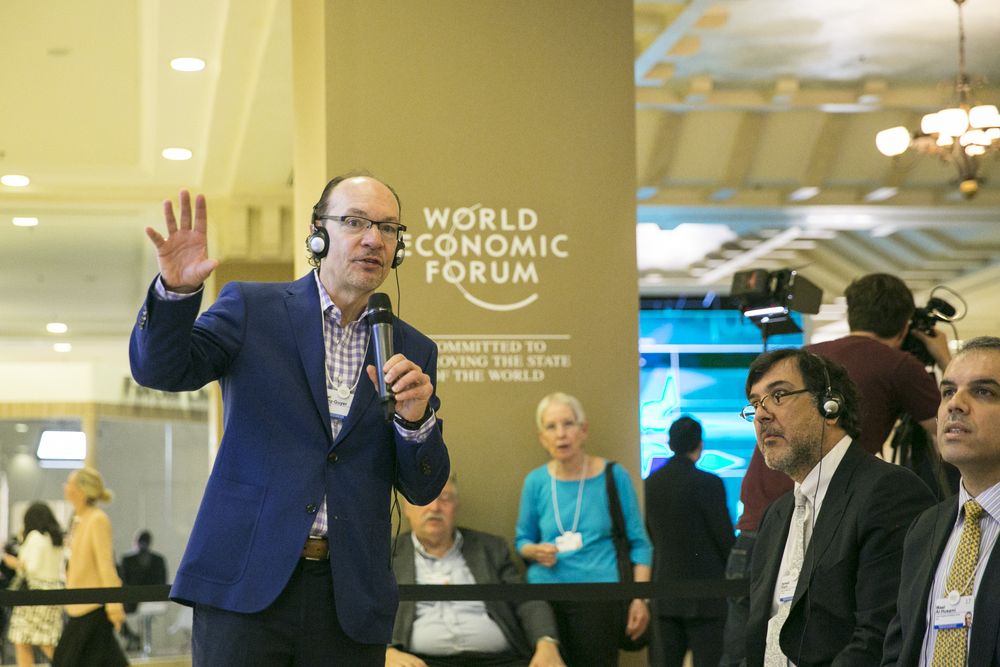 Given the rising gap between the resources needed and the money available to respond to humanitarian crises, the presence of humanitarians at the forum can also be seen through the lens of a wider push across the sector to stop working in a silo and to start engaging more closely with others who can help, whether they be development actors or the private sector.

The WEF offers a chance, in what he and others at the forum often refer to as a “multi-stakeholder world”, to “come together, find some common ground, and work together.”

He’s not alone in this view. Naser Haghamed, CEO of Islamic Relief, who along with Keny-Guyer and Maurer is a member of WEF’s Global Future Council on The Future of the Humanitarian System, told IRIN that aid agencies need to have a presence at the WEF if they are to get anything done.

“The scale and complexity of humanitarian situations in the world is beyond the capability of NGOs to handle on our own,” he said, the day after a late night of meetings with other council members. “If we claimed to be able to respond to everything and solve all the problems on our own, we would be fooling ourselves.”

With public-private partnerships all the rage in the humanitarian and development worlds, Haghamed said NGOs have to accept that private companies are already playing a major role in terms of infrastructure and data services – and are key to delivering cash-based aid. In some cases, they are already contractors for major funders like Britain's international development department, DIFD, and the US Agency for International Development, USAID.

Within his own organisation, Haghamed told IRIN there are those who don’t want the private sector to be involved in Islamic Relief’s work, “but the more I engage with [private companies], the more I see what they are doing, the more I am convinced we really need them.”

Haghamed said that his take comes down to: “if you can’t beat them, join them. We are not part of them, but we can get the best out of them.”

One head of a southern development NGO who was not at the WEF (nor she said, was she invited), told IRIN that in principle she agrees that “more and more crises are political in nature and they can’t be resolved alone.”

She agreed there’s an argument for humanitarians having a seat at the table where the power brokers are – including those who play a part in causing the crises. However, her concern is that major international NGOs “are not really there to shine a light on the political deadlock and how it is negatively impacting the humanitarian situation, and it just becomes hobnobbing with the elites. It doesn’t become a space where we are the conscience of what’s happening.”

Far from “holding power accountable”, she worries that nobody is even discussing how to prevent protracted crises from starting in the first place.

It’s not the first time the WEF has been criticised as a space for the rich to talk to the rich. Andrej Kirn, who handles much of the WEF’s humanitarian programming as Community Lead for the forum’s International Organisations and Government Affairs, told IRIN “there is a perception problem” about what the WEF is and does.

In part because of board members like Maurer and Jordan’s Queen Rania, Kirn said the WEF has “introduced in the past few years… a much more systematic approach that brings a broader audience into spaces like Davos [or at regional events].”

Kirn added that the WEF has changed over the past decade or so, and these days is more than just a financial gathering. “The humanitarian work didn’t pick up because we thought that was a nice thing to have, to polish the logo. It’s [because of] a growing understanding that all of the areas the forum is focusing on will not progress as quickly if we don’t solve some of the toughest challenges.”

Kirn believes the benefit of discussing humanitarianism with a broader community at the WEF is that “you approach problems from a different lens. And that is what is required sometimes when you want to push a change beyond the group that is preaching the change.”

Interest from the humanitarian sector is also on the up, Kirn continued, particularly in the wake of the World Humanitarian Summit’s Grand Bargain and the WEF’s commitment at Istanbul to lead the way in laying out principles for how the public and private sectors can partner on cash-based aid.

Does any of this matter to those who the aid system is supposed to benefit – the people who are not there for all the glad-handing? Changes discussed and designed at the top (including at the WEF) are having an impact on the ground – eye scanners for purchasing food, for example. But it’s true that today’s greatest problems – the refugee crisis, near famines – have not yet been solved over canapes.

The pragmatic approach taken by Islamic Relief’s Haghamed offers some relief to those uncomfortable with the idea of aid bosses mixing with some of the powerful individuals who may be involved in fueling crises. “We don’t take sides, we just talk to sides,” he told IRIN. “If I need access and you are blocking me, I need to talk to you.”