Sporting a commando-style green knit hat despite the heat, Ali* boasts that he has found a foolproof way to kill up to 50 suspected Boko Haram members at a time, by roasting them in a pit.

“We question them, and then put them in a hole, then dump kerosene or whatever materials we have on them to start the fire,” explains Ali, speaking excitedly, proud of his accomplishment.

He is a member of Nigeria’s Civilian Joint Task Force, a vigilante army of around 23,000. It has been an indispensable, though controversial, part of the military campaign against Boko Haram, the brutal jihadist group that has waged an insurgency in the country’s northeast since 2010.

Residents throughout the region have turned to the CJTF to provide protection against Boko Haram. For many, its fighters are hometown heroes, a reflection of the community’s resistance to the jihadists, and a response to the military’s failings. They are the eyes and ears of the counter-insurgency campaign.

It was the CJTF, as a spontaneous community movement, that rose up. Armed with little more than sticks, they chased the jihadists out of Maiduguri, the main city in the northeast. They have proven stubborn defenders of towns throughout the region, and the first people to be executed whenever Boko Haram takes over.

Though the CJTF is not a part of the police nor the military, it’s encouraged by state authorities, who sometimes provide equipment, training, and weapons.

But as the threat from Boko Haram wanes, there are mounting cases of the CJTF targeting the civilian population they claim to protect. They enjoy near-impunity, and the current lack of a comprehensive demobilisation plan, points to a potential crisis ahead.

The threat is so pressing that Borno State Governor Kashim Shettima has characterised the CJTF as “more dangerous than Boko Haram”. In a February interview he said: “If we fail to care for them, they could become Nigeria’s Frankenstein [monster].”

Amnesty International first reported the CJTF was committing “grisly extrajudicial executions” in 2014, with video footage of vigilantes slitting the throats of detainees alongside the army.

Despite government promises to bring the group to heel, civilians in Maiduguri – the birthplace of both Boko Haram and the CJTF – report that some vigilante members still harass, torture, and physically and sexually abuse their victims.

Amir* recounts being savagely beaten after a group of young children reported him to the CJTF, claiming he had “disrespected” them.

“The men began beating me with their sticks. I raised up my hands to try to protect myself. Their beatings broke my hands. With my hands broken, they dragged me behind them like a dead dog,” he told IRIN.

“They tied me up by my broken hands to a tree and beat me. All the while they said to me: ‘You must be Boko Haram because you are so stubborn’.” He was released only after a traditional community leader intervened in the middle of the night.

Women have not been spared. Fearing female suicide bombers – Boko Haram’s favoured urban weapon – the CJTF in Maiduguri has set special night curfews for women, and will beat any woman in violation.

Ibrahim* recalls that his friend was walking his girlfriend home after curfew when they were confronted by a CJTF patrol.

“They slapped him and removed their knives. They tried to stab him, so he fled, leaving this girl behind. He came to us, his friends, and we regrouped and went out to see if the girl was still alive.”

They found her lying on the side of the road in tears. The CJTF men had covered her face so she couldn’t identify them, and then raped her.

The CJTF has its own internal hierarchy, in which each community CJTF unit reports to one of 10 district commands, which in turn is overseen by a state-level leadership council.

It is modelled on the military: Districts correspond to the army’s zonal commands, and checkpoints throughout the region are often jointly managed. Sometimes, even military raids are conducted alongside CJTF members.

The organisation has a remarkable degree of autonomy. Jibrin Gunda, a legal advisor for the CJTF, told IRIN that Borno State has “recognised the CJTF court’s sovereignty” in dealing with disciplinary issues.

The CJTF’s legal enclave is all the more troubling given the difficulties that civilians face in reporting abuses. Many people expressed fear of retaliation and confusion as to how to access justice.

In Bama, a town 60 kilometres from Maiduguri, a CJTF commander said: “In our duties, we cycle in and out of town very often. Some can come and report the problem to me when I am in town, but some may not want to wait or not know how to report the issue.”

Gunda outlined the CJTF’s “three strike” policy of warning, suspension, and dismissal when abuses are reported. But he acknowledged that dismissal was rare and had only occurred “four or five times” in the organisation’s history. 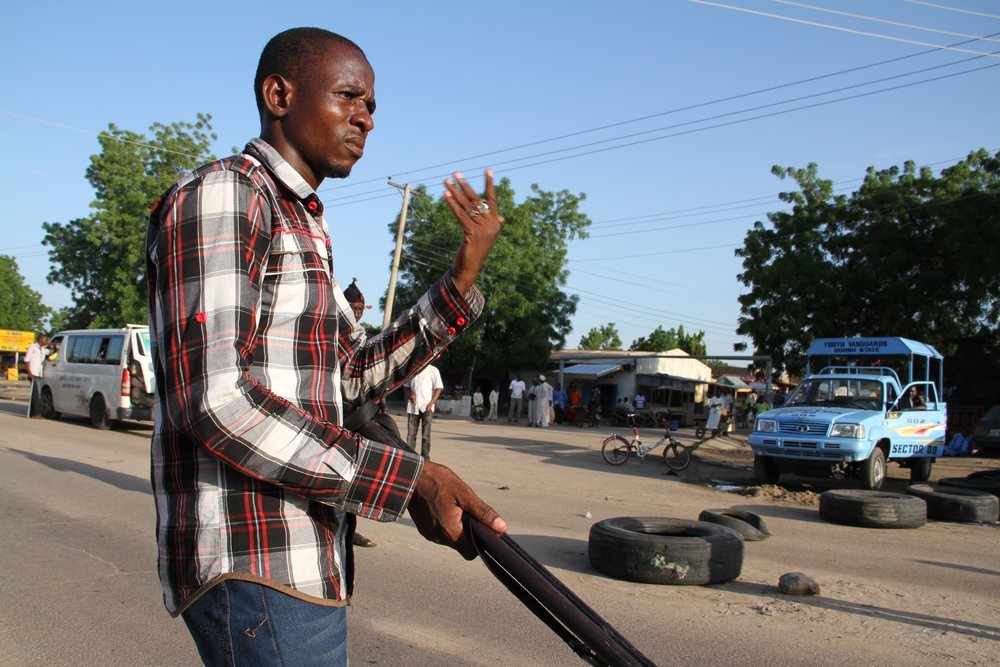 Nigeria has often grappled with how to integrate vigilante groups, which arise as a result of the failure of the police to maintain day-to-day order.

The country is considering a ‘Vigilante bill’ that would help formalise and integrate vigilantes. However, it does not tackle what should be done about the most prominent vigilante group at present – the CJTF.

The need for a viable demobilisation plan is now evident. A leader of the CJTF unit in Bama admitted: “It is tough to keep the boys in control… after Boko Haram is defeated, it will likely get even harder.”

Indeed, many CJTF have expressed their unwillingness to demobilise without a proper package from the state or federal government in place for services rendered.

“For now, there is no more respected job than [being] a CJTF member, because without us, so many people would have been killed,” one vigilante explained. “I am too big a man now to go back to that work [as a driver for hire] now.”

CJTF members in general seem eager to take jobs in the security sector or, failing that government support, to set up businesses. Their demands are not unprecedented: The amnesty programme for the militants in the Niger Delta in the mid-2000s included livelihoods provisions.

But demobilsation is complicated by the low education level of most vigilantes and their sheer numbers. One CJTF leader estimated that 75 percent of his force was unemployed prior to the crisis. Many vigilantes come from the same group of marginalised urban youth that turned to Boko Haram, a fact well understood by the authorities.

There is growing friction with the army, which increasingly regards the CJTF as a security risk and is unwilling to absorb them. Budgetary-wise, both the military and the police are already struggling to pay their current level of recruits.

Already, there is discord within the CJTF’s ranks. In particular, many members express frustration over perceived favouritism. Only a handful of CJTF units are provided with a relatively regular salary from the state government, while the remainder make do with infrequent handouts or tributes from the communities they defend.

Governor Shettima tried to encourage the formalisation of the CJTF through a Borno Youth Empowerment Scheme, or BOYES, which was originally intended to train 6,000 vigilantes.

It was terminated after training an estimated 1,850, “apparently due to the army’s uncertainty about training so many potentially unreliable persons”, according to an International Crisis Group report.

The result of this piecemeal approach is a patchwork of varying equipment and abilities. The Bama CJTF, for example, has members that attended training on bomb disposal, vehicles provided by the state government, and relatively new weapons. Other units are forced to provide all of their own equipment.

This disparate treatment and the government’s early termination of the BOYES programme contributes to a lack of trust between the government and the CJTF. Some civil society advocates fear that certain units may now refuse to disarm if asked to do so.

The impending 2019 elections may prove to be a match to the vigilante’s tinderbox.

Throughout Nigeria’s history, vigilante groups have been co-opted by politicians, transforming community-policing initiatives into political thugs-for-hire. The military training and armament of the CJTF makes that politicisation all the more dangerous.

Before it is too late, a proper plan for demobilisation, disarmament, rehabilitation and reintegration needs to be developed.

“Most importantly, CJTF members need to be able to see a post-violence future for themselves,” said Chitra Nagarajan of the Center for Civilians in Conflict, a USAID-funded project in the northeast.

Musa*, a CJTF leader based in Maiduguri, has been pleading with his government contacts to provide jobs and support to his men once they decide to leave the CJTF.

In a frightening nod to the Boko Haram insurgency, he added: “It’s possible that they [could] become robbers, or worse.”

*Names have been changed