The camps for displaced people scattered across northeast Nigeria are supposed to provide safety from Boko Haram violence. But for many women the threat is no longer the jihadists: The danger is inside the camps, and stems from the attitudes of men in general.

Fatima Mohammed* is the “acting women’s leader” in sprawling Bakassi Camp in Maiduguri, the capital of Borno State and birthplace of Boko Haram. She says she’s seeing increasing rates of domestic violence – disputes she’s expected to step in and mediate.

Sewing a prayer cap with the distinctive pattern from her hometown of Gwoza, she recalled a typical recent case. It underlines both the domestic tensions of camp life, and the easily bruised egos of men, which can all too readily flare into violence.

The example was this: A woman’s husband had found work putting up tents in another camp, and they agreed to invest his wage in a small trading business – a common practice among the displaced, who often set aside part of their meagre rations for sale so they can earn some money for medicines, cooking oil, firewood, or any of their many other unmet needs.

The business worked. But the man grew violent, resentful that it was his wife who was making the money. After one beating his wife mocked him “for not having [any] work”. That kicked off more abuse, and he also banned her from the market. That’s when Fatima was called in.

“We told him he would only be spiting himself and his children if he prevented her from going to market.” She also advised the woman not to “mock” or “make [her husband] less of a man”. The issue of the beating remained unbroached.

Abubakar Abdulahi*, an employee of the State Emergency Management Agency, laced his fingers over the bridge of his nose and sighed: “Men don’t know how to handle having their role change… this is a very sensitive issue.”

Having worked in several of the internally displaced person (IDP) camps that dot Maiduguri, Abubakar has been thrust into a number of domestic issues.

Speaking with Fatima about the state of affairs in Bakassi, a camp of 21,000 people, he was unsurprised when she reported: “there are months when the food distribution is late and the food is exhausted”. As a result, “women ask their husbands to find some food or some small money, and the men get angry and frustrated because they can’t,” Fatima said, adding that she is usually only called in to adjudicate when “the fighting gets out of hand”.

Miriam Zannah*, who works with the USAID-funded Northeast Regional Initiative in neighbouring Yobe State, said women’s roles are changing as a result of their new responsibilities as widows, orphan caretakers, and breadwinners.

Both Miriam and Abubakar advocate “women’s empowerment” programmes – development schemes that teach women how to sew caps or tailor clothes. But they have both witnessed the backlash from men.

Picking his words carefully, Abubakar explained that “men feel less like men; they always complain that NGOs are giving preference to women.”

The bias towards “women’s empowerment” is not intended to undermine men’s sense of self, but is rather a result of the demographics of the camps’ adult population, which is overwhelmingly female.

The programmes are also an easy sell to the donors for the aid organisations operating in the underdeveloped north. Maternal mortality rates in the region are among the highest in the world and women’s literacy barely cracks double digits, way behind the rest of the country.

The development programmes have not radically altered the lived experiences of women. But “having to cope with being jobless is hard on men,” said a sympathetic Fatima.

The evidence bears her out. A survey conducted by Voices 4 Change in 2016 found that men in Nigeria believe their masculinity is determined by their ability to provide for their family. 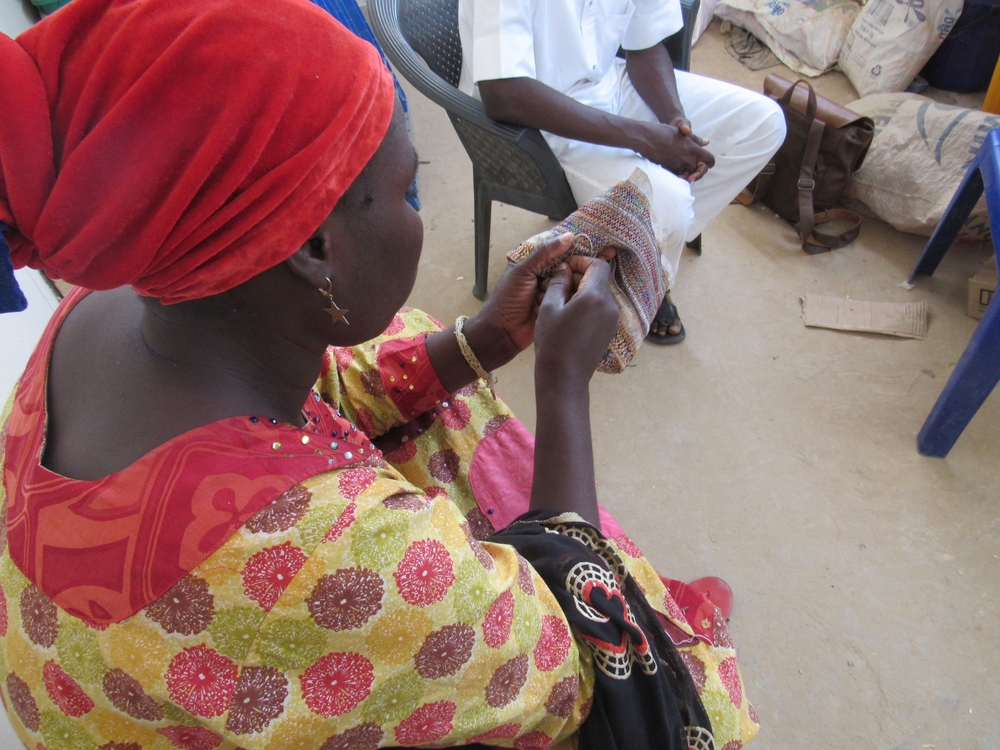 HilaryMatfess/IRIN
If the cap fits

The turmoil that has roiled the northeast since the Boko Haram insurgency began in 2009 has played its part in upending traditional order. Tens of thousands of people have been killed, some 1.7 million have been displaced, and more than five million will face crisis levels of food insecurity in the coming months.

Trauma and domestic violence are mutually reinforcing, according to a blog by Maame Esi Eshun at the Africa Program of the Wilson Center.

But “the government has no idea how to cope with this issue,” said Abubakar. Instead, domestic abuse cases are referred to community leaders, camp managers, or the police.

That doesn’t solve the problem. In Nigeria, as in most other societies, gender-based violence is ingrained, as are the attitudes associated with it.

In 2012, it was estimated that one in three Nigerian women had experienced “some form of violence, including battering and verbal abuse, emotional and psychological abuse, marital rape, sexual exploitation, or harassment within the home.”

It’s not just violence that women in Bakassi are forced to contend with, but also sexual exploitation. That can range from being turned into “cheap wives” for men in the surrounding communities, where poor families feel under pressure to marry off their daughters, to rape and “survival sex”.

In nearly every camp, residents complain about shortages of food and services. Accompanying the scarcity is a power dynamic that subjects vulnerable women to the authority of the largely male, relatively wealthy camp management team, and the security services.

Survival sex – the exchange of sexual favours for basic material needs – is not unique to Nigeria. But after being assured of anonymity, NGO workers throughout the region often let out exasperated sighs and describe how camp guards trade exit passes with female residents in exchange for a proscribed visit to their tents.

A member of the Civilian Joint Task Force, a vigilante group that works alongside the military in Borno, told IRIN plainly: “security forces are often laying with women… they are raping them, or not raping, but taking advantage, because for these girls, anything is a big deal.”

Those in charge of food distribution, too, force young women to weigh the value of an extra ration (or even the full ration that they’re entitled to) against their dignity. Pre-marital sex is still considered taboo for women in the region, so there is a heavy reputational risk.

But marriage provides no safety from exploitation. As Mohammad Aliyu*, a CJTF member noted, there is enormous pressure on poor families in the camps to marry off their daughters in order to receive the bride price.

“Whenever women reach the age of marriage, they are given, to reduce the family liability,” he said. The result is that the average bride price has tumbled from $190-$290 to $20-$30 at the current black market exchange rate of the naira.

This low barrier to entry has created opportunities for the most unscrupulous marital entrepreneurialism. “Men from town come to the camps and pick themselves cheap wives,” said Mohammed. He estimates that 40 percent of the marriages end in divorce within a few months, once the men grow bored of the woman.

After the divorce, women are often forced to return to the camps and their families. Their prospect for a future marriage is much reduced – especially if they have fallen pregnant.

“IDP camps are for IDPs – outside men shouldn’t be let in!” said Rina Mohammed*, an aid worker and protection expert.

Rina said that although that seems like an obvious step, it hasn’t been adopted because “camp managers either don’t care, see it as a positive solution, or are profiting from it”.

*All names have been changed