The catastrophic earthquake that struck Haiti in January 2010 shocked the world and galvanised a massive international response. Just over two weeks after Hurricane Matthew left a trail of destruction across the southwest of the country, already the world appears to be moving on, despite warnings that the impact is severe.

The death toll stands at 546, but contaminated water sources and destroyed health-care services are contributing to the rapid spread of cholera and the storm also killed livestock and wiped out crops in many areas where subsistence farmers were about to harvest.

“The death toll from the earthquake was horrible and the injuries were much worse, but in terms of the lasting effects I think many people would agree there’s a chance this is even worse than the earthquake,” said Conor Shapiro, CEO of the St. Boniface Haiti Foundation which provides community-based healthcare and runs a hospital in southern Haiti.

“Is the international community going to see this as the massive disaster that it is?” he added.

The earthquake generated an estimated US$9 billion in aid. By now, it’s well known that the scale of that response was not matched by the outcomes. There was a lack of coordination between the hundreds of international NGOs that flocked to the country following the disaster, but more importantly with the Haitian government and local NGOs. Consultation with the people affected by the earthquake was also minimal, hampering relief efforts and creating a lasting mistrust of foreign aid workers. UN peacekeepers failed to adequately treat their waste-water resulting in a cholera outbreak that has claimed at least 10,000 lives.

According to Emily Troutman, a freelance journalist who was based in Port-au-Prince from 2010 to 2012 and now edits her own blog Aid.Works, just 3.5 percent of the aid that poured into Haiti in the three years after the earthquake went to preparing for similar disasters.

In recent years, donor support to Haiti has dwindled. However needs remain: from cholera to drought to assiting people still displaced by the earthquake, said Enzo Di Taranto, head of office for OCHA, the UN’s emergency aid coordination body, in Haiti. He noted that the 2016 humanitarian response plan for the country was only 32 percent funded and that disaster preparedness was one of the most under-funded components, along with projects to strengthen government capacity. “There wasn’t a solid preparedness structure for a disaster we all knew was coming,” he told IRIN.

The government did have a contingency plan and its Department of Civil Protection together with the humanitarian community carried out evacuations in many coastal villages and small islands that Di Taranto said “saved many, many lives”.

The government and local NGOs broadcast public service announcements, warning local residents about the hurricane. According to Marilyn Lawney, executive director of the Haitian Health Foundation, which is based in hard-hit Jérémie, many people didn’t believe the warnings. Even if they had, she added, “I’m not sure what they could have done”. There were few buildings in the area that could withstand the Category 4 storm. 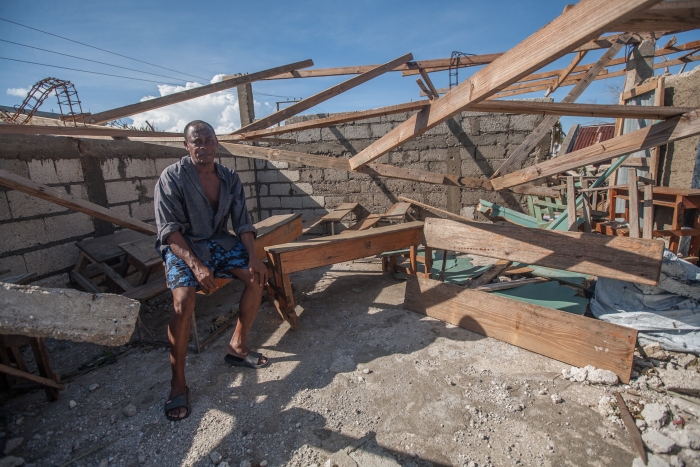 Bahare Khodabande/IRIN
A school principal, sits among the wreckage of a classroom. His school in Port-Salut used to have 253 students, but was completely destroyed by the hurricane

“Where do you go when the infrastructure is weak?” said Shaprio. “There were some shelters, but not enough.”

The World Food Programme had pre-positioned enough food to feed 300,000 people for three months ahead of hurricane season, but most of the aid was warehoused in the capital, Port-au-Prince. The difficulty of transporting supplies along damaged roads to often remote communities in the south meant that by 18 October, WFP had only reached 77,000 of the estimated 806,000 people in urgent need of food aid.

Last week, frustration at the slow pace of aid delivery was already boiling over. Several aid delivery trucks were attacked and shots were fired at a food distribution point in Chambellon, according to MINUSTAH, the UN’s peacekeeping force in Haiti.

Lessons clearly have been learned from the chaos that followed the earthquake. UN agencies and INGOs appear more aware of the need to channel assistance through government structures, but the hurricane arrived just ahead of a presidential election that has now been postponed, leaving the country’s immediate recovery in the hands of a fragile, provisional government.

“There is a will by key players to empower national authorities so you break the dependence from external partners, but this is a bit tricky because you can do that only when there is capacity,” commented Di Taranto.

Observers such as former Haiti correspondent and author Jonathan Katz argue that it’s the interference of foreign NGOs that has contributed to Haiti’s weak institutions and government and that they must now move towards forging long-term local partnerships and empowering Haitians to lead their own recovery process.

Research by Mark Schuller, an associate professor at Northern Illinois University and author of “Humanitarian Aftershocks in Haiti”, in eight camps where people displaced by the earthquake were still living found that less than five percent of respondents knew why INGOs directed aid where they did.

“There needs to be a new relationship to decision making and these need to be made public, not only to possible donors, but to people on the ground because beneficiaries have no idea why INGOs make the decisions they do,” Schuller told IRIN.

The calls for more partnership are not only coming from outside observers. A statement issued by the Popular Democratic People’s Movement, a Haitian civil society organisation, days after the hurricane warns that the government “must not tolerate, or allow any international, multilateral, bilateral or non-governmental organisation to side-step the authority of the state or local organisations to coordinate and manage in their place”.

Meanwhile, the Haitian embassy in Washington, DC has released a list of “best practices for disaster relief efforts in Haiti” that urges those wishing to assist to “operate under the guidance of local government officials and/or with organizations that… already have systems in place on the ground.”

Haitian people need to be treated “not just as survivors or victims but experts and leaders; they know best where the aid needs to going and they need to be trusted with making decisions,” said Schuller. “But there is an urgent lack of resources at the moment, so we can provide resources.”

So far, a flash appeal launched by the humanitarian sector in Haiti in conjunction with the government, has only raised $26.5 million of the $119.8 million asked for the emergency response.

“What we’re hearing is that people are asking not to be put in camps in a state of dependency,” said Schuller. “They don’t want temporary shelters; they want reconstruction using their own skills.”

[TOP PHOTO: A woman at the entrance to what is left of her home in Les Cayes. She has five children and no means to rebuild. Bahare Khodabande/IRIN)