South Sudanese refugees, driven by food insecurity, a collapsing economy, and ongoing violence continue to arrive in northern Uganda despite the formation of a unity government back home in Juba.

The return of Riek Machar, former vice president-cum-rebel leader, in April to take up the post of First Vice President has not improved the fortunes of the battered economy, or unlocked more aid money.

Weak oil prices have helped fuel the South Sudanese pound’s freefall against the dollar – driving up prices in an economy in which nearly everything is imported. Jobs and services are scarce.

South Sudan’s civil war, which broke out in December 2013, killed tens of thousands of people and displaced 2.3 million more, with both sides accused of committing war crimes. The peace deal that was finally brokered hasn’t stopped the bandit raids and abductions carried out by unknown gunmen and soldiers who haven’t seen a paycheck in months.

For many South Sudanese, Adjumani District in northern Uganda seems a far better option than sticking it out at home. New arrivals have spiked to more than 250 a day from February’s 160 daily average. Currently there are more than 132,000 refugees in the Adjumani settlements, the largest refugee concentration in the country.

Uganda has offered a safe haven through much of South Sudan’s 60 years of turmoil. But whereas in the past refugees came from the lower Equatorian states and represented ethnicities familiar to northern Uganda’s local Madi and Acholi people, new arrivals are now also Nuer from Juba, and even people from as far as Bentiu in northern Unity State.

Uganda’s refugee policy is rightly celebrated as progressive and forward-looking. It seeks to build self-sufficiency and integrate refugees and asylum seekers into the host community. But Uganda now hosts more than 510,000 refugees and the approach is being stretched to its limits.

For example, the Nyumanzi transit centre, where refugees wait before their relocation to permanent settlements in Adjumani, was built in early 2014 to hold 2,000 people for no more than two weeks. Now, it holds 5,000 and stays of a month or more are commonplace.

Uganda’s refugee system avoids the traditional model of packing refugees into camps, far from local communities. Instead, they are provided with a basic ration and allotted plots of land, construction materials, and tools with which to build their new lives.

“Refugees have access to the same services as Ugandan nationals, have the right to work and to establish their own businesses,” a statement from the UN’s refugee agency, UNHCR, said. “They [also] enjoy freedom of movement.”

The allotments are negotiated by the government with local host communities who are eager to donate in return for a share of the services that come along with refugee resettlement. These rural communities previously had little access to healthcare, education, or a strong security presence.

When the refugees are repatriated, or move elsewhere to find employment, their allotted land is returned to their hosts, but the services and infrastructure are there to stay.

“This model is much better than something like Dadaab [Kenya’s troubled camp, which the government insists it will close],” says Emmanuel Comehn, of the Danish Refugee Council. “The investments don’t go to waste. We have 50/50 servicing to refugees and hosts to make resettlement actually work.”

This makes it an easier sell to donors, who want to see their investments have a more lasting impact. By contrast, Dadaab faces perennial funding shortfalls, while the Kenyan government refuses to consider an assimilation policy, which means no long-term strategy to improve livelihoods.

In Adjumani, refugees and the host community enjoy a productive relationship, providing an expanded market for each other’s efforts. “We hope that more will come,” Julius Loketo, a member of the Madi host community, told IRIN.

That is not to say that life in the Adjumani settlements is plain sailing. As the number of refugees increases, the amount of land to go around shrinks.

Those who arrived in the early days of the programme received plots that stretched 50x50 metres. Today, the standard is 30x30 metres, with some newer settlements even opening with 25x25-metre plots – too small to be sustainable.

The basic rations are not nearly enough to supplement the harvest from these small plots, increasing the very aid dependence the strategy was supposed to avoid.

Traditionally, there have been few frictions between the host community and incoming refugees. But handling conflicts within the refugee population itself is an increasingly daunting prospect as people on either side of the political/ethnic divide begin to arrive. 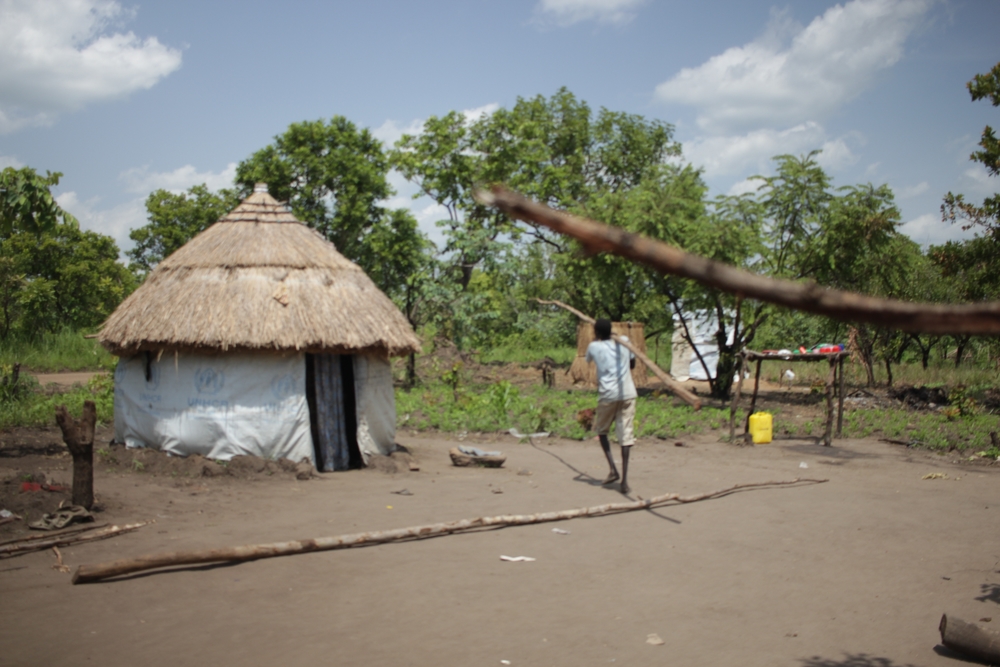 South Sudan’s conflict pitted President Salva Kiir against his rival, Machar. What was initially a political clash escalated into an ethnic conflict between Kiir’s Dinka ethnic group and Machar’s Nuer. Several other communities have been caught up in this polarising struggle.

Despite official policy, the settlements are generally segregated along ethnic lines and closely patrolled by security forces. “The strongest efforts are being made to put Nuer on the governing councils of the settlements and vary [the council’s] make-ups,” said Comehn, referring to those from Machar’s ethnic group, formerly an under-represented minority among the refugees.

One of the most important elements of the programme has been the way in which market forces have boosted integration between refugees and hosts. Refugees trade their NGO-rationed cooking oil, sorghum, tarpaulins, and tools to locals, who, in turn, supply them with cassava and other vegetables. But as refugee numbers grow, the prices their offerings command in the market falls.

If freedom of movement is restricted by the Ugandan authorities on security grounds, then the refugees won’t be able to take their goods to the larger markets outside the settlements where they can get better prices.

Kiir is insisting on the creation of 28 states – up from 10. The opposition regards this as gerrymandering on behalf of the Dinka for political and economic gain. Donors are distancing themselves over the bickering; the ruling Sudan People’s Liberation Movement is fractured; and with elections due in 2018, the ingredients are there for further bloodletting.

Adjumani looks likely to be home for South Sudanese for a good while yet. But no matter how effective the Ugandan model of refugee integration may be, it can’t continue indefinitely with this kind of influx.