One of the key issues on the agenda at next week’s World Humanitarian Summit will be how to address record levels of forced displacement.

The number of people forced from their homes by conflict and persecution has now reached an estimated 60 million. The reason is not more wars, but conflicts that have become more intractable and drawn out. More than 80 percent of refugee crises now last for 10 or more years and two out of five last for at least 20 years.

There’s now widespread recognition that as more people are being forced from their homes for longer periods, the old model of handing out tents and food is no longer working. Funding for humanitarian assistance is finite and it tends to dry up after a few years as new crises crop up.

For people with no prospect of returning home anytime soon, minimal opportunities for resettlement to a third country, and dwindling access to aid, the only real hope is to help them find ways to support themselves and improve their living conditions. In the aid world, this is called shifting from a humanitarian to a development approach. It sounds simple enough, but translating the rationale into tangible change in the way governments, international organisations and donors respond to displacement is turning out to be a tall order.

Consider the predicament of 360,000 Sudanese refugees from Darfur who have been living in isolated camps in eastern Chad for the past decade. In the early years of their displacement “there was a great deal of attention focused on their plight,” says Michael Boyce of Refugees International.

“Everyone was going out to eastern Chad to showcase their needs and deliver services. We’re now 10 years out from that and the attention and funding has dropped off. As of the end of March, UNHCR (the UN’s refugee agency) had only received four percent of the funding they need there.”

Boyce visited the camps last June, more than a year after the World Food Programme had been forced to cut food rations for the refugees by 50 percent. In a report that he co-authored following that visit, he observed that humanitarian funding had dried up before being replaced by desperately needed development activities and that after years of aid dependency, the refugees were being pushed to become self-reliant in a semi-desert location with very limited livelihood opportunities. 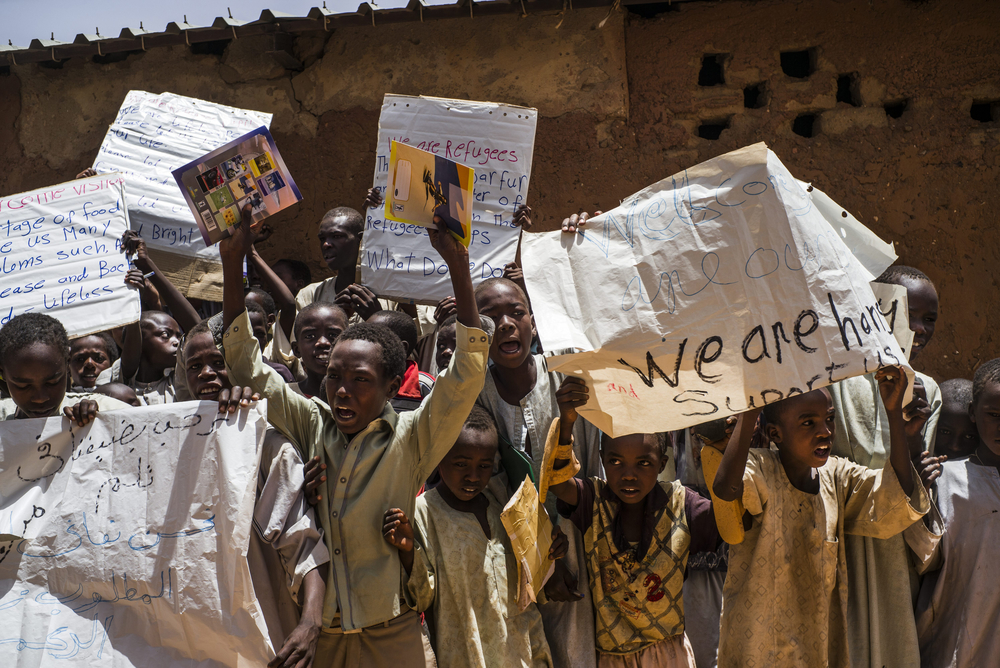 UNHCR’s country representative for Chad, Antonio Canhandula, admits that attempts to shift to a self-reliance approach have been by default rather than by design as funding has dropped off. “That’s not the best way to change approaches,” he told IRIN.

He added that while the real challenges were mainly developmental ones affecting both the refugees and surrounding communities – environmental degradation, water shortages and a lack of health services – there was little funding or technical capacity to address them.

“What we really need is to marry our programmes with development programmes,” he said. “But most development agencies are sitting in Europe; few are with us in the field.”

Part of the problem is that host governments often prefer the humanitarian approach because it helps maintain the politically convenient illusion that refugees are a temporary burden that can be dealt with by the international community until they go home. Partnering with development actors to improve conditions for refugees and move them towards self-reliance is an admission that they will be around for the long-term.

In countries like Kenya, where refugees have been confined to camps for decades with no legal right to work, there is no political will to make such a shift. Tentative steps at the regional level towards integrating the refugees at Kakuma camp into the local economy have been eclipsed by the government’s recent announcement that it intends to close down the Dadaab refugee camps.

Alexander Betts, director of Oxford University’s Refugee Studies Centre, says that global level discussions about how to close the humanitarian-development divide have tended to underestimate the extent that conditions on the ground, such as the right regulatory environment and employment and educational opportunities for refugees, need to be in place before a real shift can take place.

“If refugees don’t have the right to work or freedom of movement, then even inserting them in national development plans would have significant limitations in terms of the impact it will have,” he told IRIN.

The long road to change

International organisations in the humanitarian and development sectors also need to rethink the way they work, said Betts. Humanitarian agencies like UNHCR need to start approaching displacement as an economic issue and to “borrow from the development toolbox”. Meanwhile, development actors like the UN’s Development Programme (UNDP) need to engage more in displacement issues. Donor governments also have a role to play in terms of funding longer-term projects that support refugee self-reliance.

Small inroads are being made. In addition to the conversations happening at a global level at the World Humanitarian Summit and elsewhere, projects are being piloted in the field in various countries. A recent mapping exercise by the Nairobi-based Regional Durable Solutions Secretariat identified 14 initiatives, just in eastern Africa and the Horn of Africa, where humanitarian, development and private sector actors are working together on durable solutions for refugees and internally displaced people (IDPs).

The Geneva-based Solutions Alliance, which aims to help displaced people move towards self-reliance, is supporting national groups in Zambia, Tanzania, Uganda and Somalia to include displaced populations in their national development plans.

“It’s still at an embryonic stage, but the model is potentially innovative and creative because it starts at national level with governments prepared to do things differently and then provides them with a network of support from businesses, donors and civil society,” explained Betts, who is co-chair of the Solutions Alliance’s research working group.

Meanwhile, the World Bank is working closely with UNHCR to support public service delivery to Syrian refugees and host communities in Jordan.

Later this year, the World Bank will launch projects in Djibouti, Ethiopia, Zambia, Uganda and the Democratic Republic of Congo. The projects are country specific – Zambia’s will support local integration of long-term Angolan refugees, Congo’s will focus on IDPs and Ethiopia’s will address the environmental impacts of hosting large numbers of refugees – but they all share an emphasis on supporting host communities, said Joanna De Berry, a senior social development specialist at the World Bank.

“The majority of the beneficiaries will be from the host populations,” she told IRIN. “That’s one of the things we can do differently as a development agency.

“The other common theme across all the projects is the use of government systems [for delivery] rather than the parallel systems often used by NGOs.”

Both the focus on host communities and the strengthening of government capacity are helpful in convincing countries to take out World Bank loans, even low-interest ones, to fund projects that are indirectly aimed at benefiting non-citizens.

De Berry believes host governments’ reticence about investing in projects promoting refugee and IDP self-reliance can be overcome. She cited a World Bank project to improve living conditions and create more employment opportunities for IDPs in Azerbaijan. “We sat down with the government and said, ‘You have all these IDPs dependent on state subsidies; if they were self-reliant and were contributing to the economy, you’d see a three percent upswing in GDP, so it’s a question of economic sense.’”

She added that the results of the project had been “quite outstanding”, with a significant payback for the government.

It is still unclear who will take the lead in moving forward efforts to address the long-term development needs of refugees and IDPs and what exactly a more developmental approach would look like.

“It’s still very early days,” said De Berry. “We’re challenged on the accountability side, of who’s going to hold who to account on doing things differently.”

Boyce of Refugees International puts it more bluntly: “There’s still buck-passing going on. Everyone wants someone else to take charge,” he told IRIN.

“Mindsets are slowly changing and if the World Humanitarian Summit can really get everyone on the same page and contributing to solving this problem that would be a great result.”

No one really believes that the needed transition is going to occur at the World Humanitarian Summit or even at the high-level meeting to address large movements of refugees due to take place at the UN General Assembly in September.

“We’ve got to be realistic about what summits can achieve,” said Betts. “Rather than seeing them as one-off events, it’s more constructive to see them as part of a process.

“Success or otherwise won’t be determined in Istanbul or New York. It’ll be determined by the longer-term visions that emerge from those conversations.”