The world united in a campaign to demand #BringBackOurGirls after the abduction of the Chibok school girls two years ago by the Nigerian jihadist group Boko Haram. But there has been next to nothing in the way of support to the women that have managed to escape the militants.

They are now homeless, reduced to begging to survive, and forced to deal alone with the trauma of their ordeal.

Safiya sits on a woven mat under a scraggly tree in the grounds of Madina Mosque, on the outskirts of the northeastern city of Maiduguri, rocking her newborn son. The mosque has become a rough-and-ready sanctuary for around 2,000 people who have fled the conflict.

“We spent three months in the forest, crawling through the bush, bringing all five children and trying not to disturb the infection in my husband’s wound from where Boko Haram shot him,” she says.

She was pregnant as well at the time. When she felt the baby was almost due, she left her husband with the children and walked the remaining 70 kilometres to Maiduguri, and this mosque.

Safiya delivered her son here a week later, without a doctor, midwife, or medicine. Her family finally managed to join her, helped by communities along their path, and though they are now physically safe and united, that’s about the extent of it.

Safiya is from Baga – as are many of the families camped out on the mosque grounds. The town in the far north, on the border with Chad, was captured and destroyed by Boko Haram in January last year.

“We are just managing to survive here,” Safiya says. The women sitting with her, braiding hair and bouncing children on their laps, nod. One chimes in: “all the children do here is beg. All the women do is beg. We have nothing else to do.”

Although the Nigerian army is finally getting the upper hand in the insurgency, towns like Baga are far from secure. Nobody here feels ready to risk going home.

The six years of violence has killed an estimated 30,000 people and uprooted 1.9 million. Most of these internally displaced persons (IDPs) have escaped to Maiduguri, the capital of Borno State, whose motto – conceived in happier times – is the now ironic “home of peace”.

Virtually all IDPs are sheltering in the local community, among friends or relatives, or places like the Madina Mosque. It’s run by Khalifa Ahmed Aliyu Abulfathi, a prominent leader of the Tijaniyya: the largest Sufi religious order in West Africa.

The IDPs are allowed to set up rudimentary shelters in the grounds, but there is little else in the way of support for them.

Just eight percent of IDPs live in more than 80 government-run “camp-like” sites, according to the International Organization for Migration. Conditions are so poor, including the risk of sexual exploitation by the security forces patrolling them, that most of those displaced prefer to try and be absorbed by the community.

Amnesty International estimates that more than 2,000 women have been abducted by Boko Haram, but the actual number could be a good deal higher. They took 276 school girls from Chibok alone in April 2014, and in Damasak last year, 400 women and children were seized by the militants.

Nearly every woman IRIN spoke to under the age of 50 who had been captured by Boko Haram said they had been raped or sexually abused, usually under the guise of a sham “marriage”.

Bawagana, a shy 15-year-old living in Sanda Kyarimi camp, one of the official IDP sites, said that a Boko Haram fighter had come to her home in Dikwa, 90 kilometres east of Maiduguri, and asked “Do you love me?”

“Of course I answered, ‘no!’” she said, with her eyes fixed on the ground. “The boy got very angry and said: ‘If you do not come with me, I will kill your father, but if you come with me I will let him live.’”

In the Boko Haram base, she was sexually assaulted and beaten, forced to cook and clean for her ‘husband’. She also attended a perverse Quranic school in which she was taught that “anyone who is not Boko Haram is an infidel” – and therefore can be killed.

She didn’t mind the classes, as “life was easier for the women that went to the school – they did not have to cook as much and they were treated more softly.”

Bawagana finally managed to escape when her husband left on a raid – the kind of brave, desperate action all the women here, who had been in Boko Haram captivity, had also taken.

What the stories of these escapees makes clear is that capturing women and girls is a deliberate strategy of Boko Haram. They are used as a commodity to recruit, retain and reward its militants.

“In this crisis, these men can take a wife at no extra charge,” explained Kaka, a young woman orphaned, captured and raped by Boko Haram. “Usually it is very expensive to take a wife, very hard to get married, but not now.”

In some Boko Haram bases, the marriage ceremony is formalised. A 15-year-old boy who was held by the insurgents for two years recalled how “they gather all the people around and the imam marries them like it is a normal thing.” With a slow shake of his head he added: “they even sing in Arabic after, just like other weddings.”

For others there was no ceremony – a Boko Haram fighter simply laid claim to them as a “wife”. 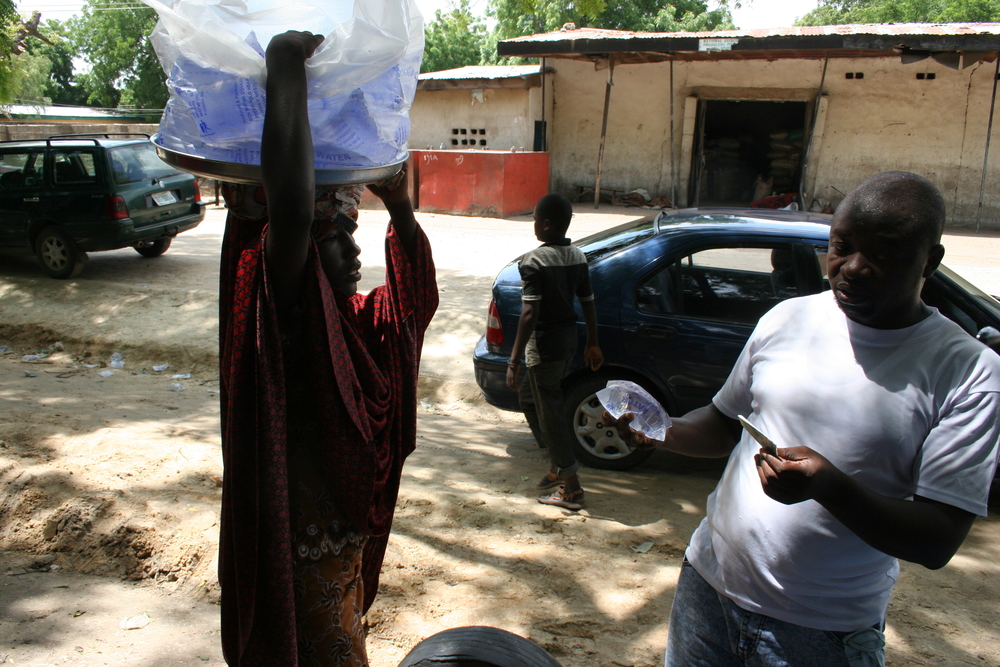 Others described anarchic sexual assault. One girl in Sanda Kyarimi IDP camp said they “would rape each other’s wives when they were not around; they would hold a knife to your throat and tell you not to scream.”

Abuse in the camps

In reality the assistance is limited and uneven. Nigeria is Africa’s largest economy, but the oil price crash and a currency devaluation has squeezed the delivery of even the most basic services to the camps. The authorities are also eager for the IDPs to return to their homes.

Those who don’t live in the camps are often overlooked in humanitarian efforts – even though NEMA has talked about off-camp support for years. They instead depend on the community, which has been impoverished by an insurgency that has also ruined the region’s trade and livestock-based economy.

Umma, a worn 60-year-old woman, says living in the mosque and surviving on begging means she eats “maybe one meal a day, usually rice”: Some days “we get nothing.”

Others worry that their roofless shelters will be flooded in the coming rainy season. “The conditions here are unsafe, but it is a different insecurity from Boko Haram,” said Aisha, who fled Baga with a newborn baby strapped to her back.

And yet a significant number of these women are steering clear of the official camps. One member of the mosque, who visits the IDPs regularly, said that one reason is the “reports of military men and [the vigilante] Civilian Joint Task Force exploiting the women for sex”.

One human rights advocate confirmed that “girls in the camps, as young as seven, are being forced into having sex for a little money or even just the rations they deserve.”

An employee at the government-run Bakassi Camp admitted “some of the women have left the camp to return to their homes, where it is not yet secure, rather than face the constant sexual assault. They return to the places that the police are even afraid to go.”

The lack of support being offered to the women in Maiduguri and across the region undermines the government’s project to rebuild the northeast and undercut the appeal of Boko Haram among the poor and marginalised.

While the physical infrastructure can be repaired, there is no corresponding commitment to rebuild the communities devastated by the insurgency.