The crisis that erupted in Burundi in April 2015 following Pierre Nkurunziza’s decision to seek a controversial third term as president has claimed more than 400 lives and caused more than 230,000 people to flee the country, according to the UN. But it isn’t just citizens who have suffered - the economy is in a bad way too.

Alexandre Nyabenda works as a trader in a shop in Cibitoke, one of the so-called “contested areas” of the capital Bujumbura, which are really just the hotbeds of opposition to Nkurunziza that have seen most political unrest.

Nyabenda, who has been working there for the past six years, told IRIN that trade had really suffered as a result of the instability.

The fall is explained by the fact that so many customers fled the country as Burundi descended into violence. Those who have stayed don’t have the same purchasing power so the quantity of goods sold has markedly declined.

“A father who was buying two kilos of rice and two kilos of beans every day to feed his five children and his wife is now buying only half a kilo because his domestic helper, his wife and his children have fled into exile,” explained Nyabenda.

“A grenade was thrown near my restaurant”

Things are even worse for Sinkazi Kevin, 32, a coal seller in Cibitoke who has gone practically bankrupt due to the tough economic times.

“Before this crisis I was selling at least six to 10 sacks of coal a day, but now I’m only selling one,” Kevin told IRIN, clearly angry. “There are no buyers! People have fled, and restaurant owners who were good potential clients before are now doing hardly any business, or have even closed their restaurants.”

Micheella Kanyana was forced to close her small restaurant in Cibitoke because the unrest and insecurity was too great to carry on.

“A grenade was thrown near my restaurant. I was already scared. Next, our customers, who were the motorcyclists, the taxi bike drivers, they stopped coming. And then our coal suppliers, our food suppliers were too scared to come to our area. This is why I closed my restaurant,” Kanyana told IRIN.

“I asked three restaurant workers that I had taken on to return home for fear of seeing them arrested or killed because they were all young,” she added.

Even the prestigious University of Burundi, the only academic institution in the country with resident accomodation is not immune from the economic crisis. It recently suspended providing breakfast for its boarding students.

A Burundian refugee dozes in the midday sun at the Lake Tanganyika Stadium, a temporary transit camp for refugees in Kigoma, Tanzania. Tens of thousands of people have been fleeing Burundi amid rising political tensions and a failed coup ahead of election 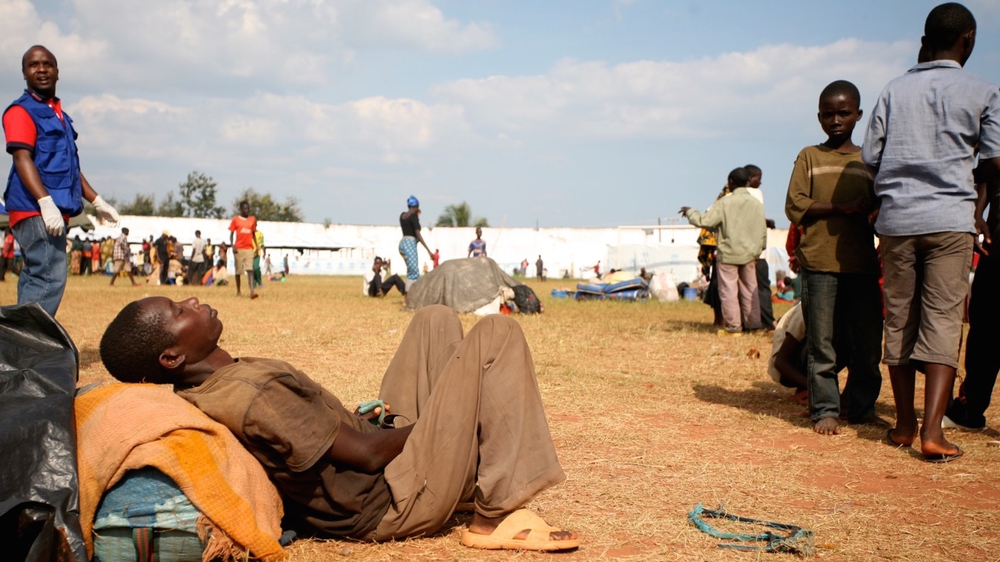 “The price of beans has gone from 1,200 francs (76 cents) before the crisis to 1,800 francs ($1.15) today. Rice has gone from 1,100 francs to 1,700 francs a kilo,” said Anatole Nzinahora, head of the university management, explaining that they simply didn’t have the means now to feed students three times a day.

According to him, the suspension of a morning meal will allow the management to at least feed the students sometimes, in a period when some of the school’s food suppliers are hesitant to deliver.

Rents in relatively calm districts of Bujumbura have risen as a consequence of their perceived stability.

“I lost my job because of the crisis. My wife no longer works,” Jean Marie Ndaruhayinda, the owner of a house in Gasenyi in northern Bujumbura, told IRIN. “The only income I have is rental income. Because my house is in Gasenyi (a calm area), I have had to double it from 150,000 francs a month rent to 300,000 francs a month.”

As for Audace Ndayisaba, the owner of a house in the “contested area” of Mutakura, his tenants left his houses seven months ago.

“I built small houses for tenants,” he told IRIN. “In total I was easily earning one million Burundian francs ($637) a month in rental income. Now, all the tenants have gone elsewhere because of the security situation. So I am earning nothing and I don’t even have a nightwatchman to look after the premises because of insecurity.”

Prospects for the Burundi economy are not good. Annual GDP growth for 2015 was -7.2 percent, and it is set to fall further with insecurity, a deteriorating business climate and tense relations with donors weighing on the treasury.

The 2016 budget shows a fall in government spending of more than 46 percent, economist Léonce Sinzinkayo told the Iwacu newspaper.

He calculated that revenue has plunged by $14.3 million, with the budget deficit now at $891 million.

The downturn in food production and the difficulty in getting produce to market, is likely to see food prices continue their rise.