“Please, sir, please! This is very serious. My engine is off and I have children and pregnant women.” The desperate plea comes from a rubber dinghy packed with 112 people who set off from the Libyan coast in the hope of reaching Europe.

The call is received hundreds of miles away in a Rome basement filled with maps, charts, and phones. From this government building, nestled between modern office blocks and fascist-era architecture, the Italian coastguard runs the Maritime Rescue Coordination Centre. It is a 365-day-a-year operation that coordinated more than 930 sea rescues in 2015, saving over 150,000 lives. There are no days off. On Christmas Day, 751 people were rescued from six different boats.

Although the majority of operations are successful, rescue boats don’t reach everyone in time. Last year, 3,771 people died or went missing trying to cross the Mediterranean, 77 percent of them in the Central Mediterranean between Libya and Italy: the world’s deadliest migration route. Continued instability in Libya means the country is unable to coordinate its own search and rescue missions, leaving the Italian authorities to step in.

The task faced by those coordinating rescues from Rome is immense. Migrants typically call the operations centre directly, using a satellite phone provided by their smugglers with limited instructions on how to work them. Panicked callers often lack the knowledge or language skills to communicate vital information. 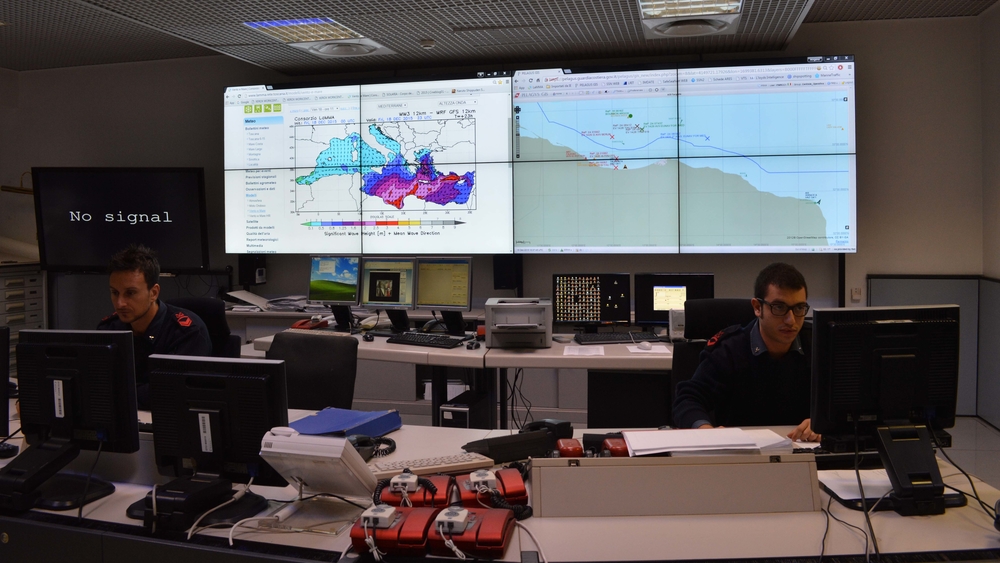 “They don’t always speak English. Sometimes Arabic, but Arabic is incomprehensible to us,” says Sergio Liardo, who is in charge of the Centre. His team between them speak Italian, English, and French. Teaching staff Arabic has been deemed too difficult owing to the numerous dialects, while many of those hoping to be saved have other native languages.

When taking a call, phone operators try to extract three key pieces of information: the boat’s position as provided by the satellite phone; whether there are people on board in urgent need of assistance, such as the severely ill or heavily pregnant; and what type of boat they’re using and what state it’s in. It can take more than one phone call to determine the boat’s location, after which a red “X” is marked on a live map and the rescue mission gets under way.

Although the operation is coordinated by the Italian coastguard, numerous other agencies are involved and their ships can also be seen on the maritime map. They include those operating on behalf of the EU’s border agency, Frontex, and merchant vessels passing through the Mediterranean. Humanitarian organisations such as medical charity Médecins Sans Frontières and the Malta-based Migrant Offshore Aid Station (MOAS) also operate rescue ships that can be called upon, although, after eight months at sea, MSF has now ended its operations in the Mediterranean.

“It’s definitely something new for us to work so closely with a state actor,” he told IRIN. “Our cooperation with the Rescue Coordination Centre has been very good.”

MOAS conferred with the Rome centre before deploying their rescue ship for the first time in 2014. “They told us where we would be of most value,” said MOAS’ director Martin Xuereb.

“We are at the disposal of the Rome coordination centre; they know exactly where we are all the time.”

When possible, the Italian coastguard dispatches its own ships to carry out rescues, but other vessels that are both nearer and have the necessary capacity may be called upon.

“The objective is to arrive in the shortest time possible [and] to intervene in a useful way to rescue the migrants,” explained Liardo.

MOAS uses a drone to detect migrant boats in distress, but lacks complete information about which vessels in the area might be best placed to assist. “The entity that has this [whole] picture is the Rome coordination centre,” said Xuereb.

Who to save first?

With hundreds – if not thousands – of people often needing to be saved at one time, the Rome centre must choose who to save first. “The priority is generally given to a rubber dinghy, because it’s a less stable mode of transport than a (larger) boat. But, if an immigrant, or whoever, making the call tells us that they’re taking on water, clearly that rescue takes the priority,” Liardo said.

During 2015, smugglers increasingly used rubber dinghies rather than wooden fishing boats, which are usually sturdier and carry larger numbers but were in short supply in Libya.

Mediterranean rescues: how its done 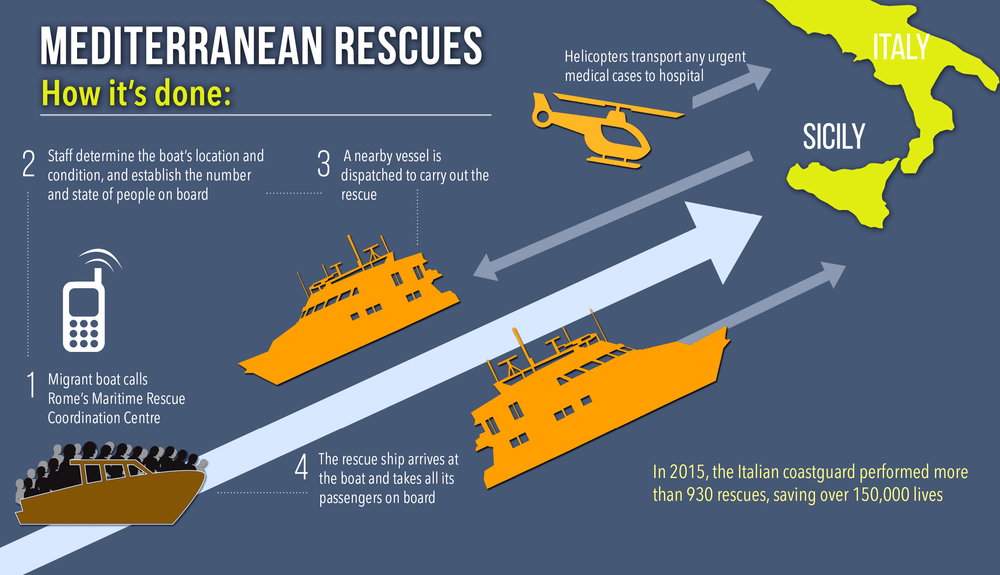 The moment a rescue ship reaches a migrant vessel can be the most dangerous point of the operation if it is not carefully managed. Passengers quickly moving to one side of an overloaded boat can result in it capsizing and people drowning before they can be pulled from the water. In the vast majority of cases, people are transferred safely to a rescue boat. They may then be moved onto a larger ship capable of taking hundreds of people from different rescue operations for disembarkation at an Italian port, usually in Sicily.

The Rome centre responds to all calls it receives – up to 27 each day – planning staffing levels based on weather reports that help them predict how many boats will attempt the sea crossing on a given day.

Although the number of boats leaving Libya is generally lower in the winter, more than 4,600 people were rescued in just three days in December. The difficulties associated with winter rescues make them twice as challenging as a summer operation, even with the specialised vessel the coastguard uses in stormy seas, Liardo said.

“In the winter you must intervene as quickly as possible for a series of reasons, such as the external temperature,” he explained.

International attention shifted from Italy to Greece in 2015 as the sea route from Turkey overtook the Central Mediterranean route in popularity, but dozens of migrants still use the more treacherous route from Libya every day and Liardo’s team is likely to continue playing a vital role in 2016.

Italy has substantially more experience in rescuing migrants than Greece, with the Italian navy having already coordinated the rescue of 170,000 people in 2014 through its “Mare Nostrum” emergency operation, which used naval ships and aircraft to patrol the Mediterranean and could rescue hundreds of migrants at a time. The mission was scrapped in late 2014 due to its nine-million-euro-a-month price tag and the Italian government’s unwillingness to shoulder the cost alone.

Stein, of MSF, noted there is still a need for a dedicated search and rescue operation with backing from EU member states. Although Frontex runs sea operations, its primary concern is border control rather than saving lives.

The Rome coordination centre continues to be funded by the Italian state and, according to Liardo, receives calls even from the Aegean. “The biggest challenge is to be ready – we do it, continue to do it and always look to better ourselves, because that’s the fundamental objective.”