Gathered on the calm shores of Lake Geneva, a group of 32 political representatives failed to reach agreement on how to accommodate hundreds of thousands of refugees fleeing violent oppression.

This is not the opening paragraph of a recent news report on Europe’s efforts to deal with the migration crisis and the exodus from Syria. It describes the Evian conference in 1938 when politicians, diplomats and refugee support groups came together in the French spa town at the invitation of US President Franklin D. Roosevelt.

On 6 July 1938, the pressing situation was that of overwhelmingly Jewish refugees from Germany and Austria and the need to find urgent solutions for their absorption as Adolf Hitler’s Nazi laws made them outcasts in their own countries.

Ten days later, the Evian conference was over – with no meaningful outcome. Country after country stood up and expressed sympathy with the refugees, yet offered no significant practical help. The United States itself – represented not by Roosevelt or even an elected official but by a friend of the president called Myron C. Taylor – refused to increase the annual admission quota of 27,370 from Germany and Austria even before the meeting began. Lord Winterton, representative of Great Britain, clearly outlined his country's position: “The United Kingdom is not a country of immigration”.

As Golda Meir, later foreign minister and prime minister of the State of Israel, wrote about the conference many years later: "sitting there in that magnificent hall and listening to the delegates of 32 countries rise, each in turn, to explain how much they would have liked to take in substantial numbers of refugees and how unfortunate it was that they were not able to do so, was a terrible experience, [...] "(Golda Meir: My Life, New York, 1975, p. 158, Original English).

On 13 July 1938, the German newspaper "Völkischer Beobachter” triumphantly commented: "No one wants them.”??

So why was this the case? And what can the failure of Evian tell us about the current policy debate over the fate of the refugees fleeing the self-styled Islamic State and the war in Syria?

The historical and cultural context is obviously quite different, but the opposition to accepting Jewish immigrants in the 1930s was rooted in many of the same concerns politicians cite today: security, the need to maintain a cohesive society, safeguarding national economic interest.

Just a few decades before, immigration had been considered such an insignificant issue in Europe that it was not even a suitable matter for legislation. In Holland and the UK, foreigners just needed to have sufficient funds and valid papers. Everyone was welcome. The first effort to restrict those coming to the UK came in 1905 with the Aliens Act.

The 1920s, however, saw mass migration and displacement following World War I. And by 1938, more than half a million refugees were on the move across Europe, fleeing the Nazis, who had rendered first 900,000 German Jews stateless under the Nuremberg Laws, then 200,000 Austrian Jews following the invasion in 1938. 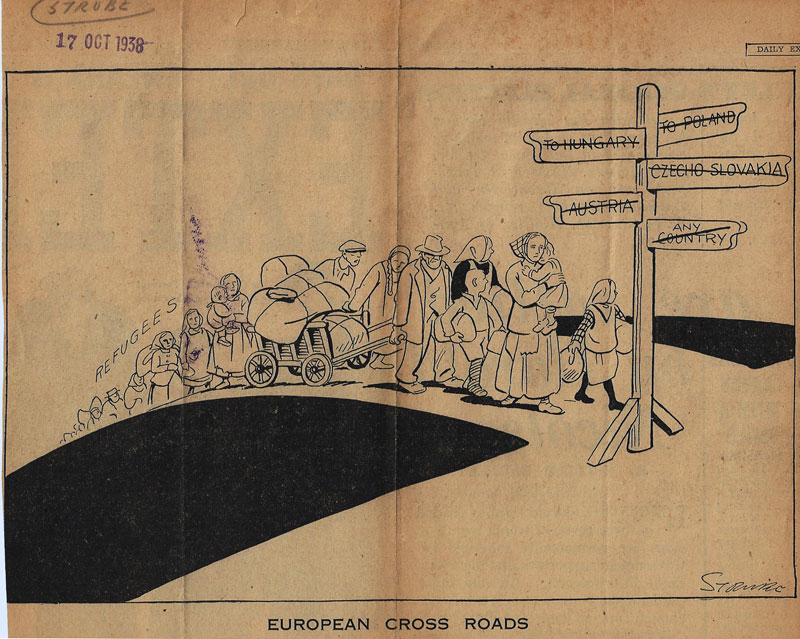 At the Evian conference, some of the reasons behind the delegates’ reluctance to accept refugees were laid flat on the table.

A key concern was the destabilising effect that large numbers of refugees might have on society, driven by the perception that they would be unable to assimilate, a notion that is still front and centre of the current debate over the Syrian refugee crisis. “We have no real racial problem,” declared the Australian representative at Evian, T. W. White. “We are not desirous of importing one.”

“Let us stop immigration completely for a while and give our present alien population an opportunity to become Americanized first before they foreignize us,” wrote the editor of Defender Magazine in America. This was not a new thread in American thinking. Since 1924, immigration policy had been led by the principle of maintaining the stability of American society through blocking the immigration of those who might threaten it, with a particular threat seen from Asia.

Like some Eastern European leaders and key Republicans today, others were only willing to take those of particular faiths. Brazil stated its willingness to accept only applications accompanied by a certificate of Christian baptism.

Then, as now, politicians were strongly influenced by economic concerns. Both Europe and America were only just recovering from the Great Depression, a period that had also seen the start of welfare provision. In America, millions were still dependent on federal relief.

As is the case today, 1938 was also characterised by concerns that refugees would take up resources meant for the poor and dispossessed citizens of the host country. “If homes are available for 20,000 children, then certainly there are 20,000 American children whose condition could be tremendously benefited,” wrote Senator Robert Taft to a constituent who had asked him to vote in favour of allowing 20,000 Jewish children to come to America. He voted against. The children were barred.

In1933, the offer of British Jews to cover all costs associated with the influx – then estimated at between 3,000 and 4,000 – was critical to the British government’s decision to allow the first refugees to enter the UK. Those who were accepted, even children, were forbidden from working.

The perception that incoming refugees would take jobs – a prevalent argument today – was also widespread. Trade unions on both sides of the Atlantic campaigned against refugees in case their members’ jobs should be threatened. In France, still coping with the influx especially from Russia of the 1920s, Jews were already blocked from key professions by 1935. The Metz Chamber of Commerce described them as “highly undesirable” and the British Medical Association vetoed a Home Office scheme to bring just 500 Austrian Jewish doctors to Britain after the Anschluss.

For other countries, accepting refugees was a way of plugging economic gaps. Canada stated at Evian that they were only prepared to accept experienced agricultural workers. Britain made an exception for domestic servants, although one particularly picky official said he was “appalled to see the bad type of refugee presenting… so filthily dirty in their person and their clothing that they were utterly unfit to go inside a decent British home.” 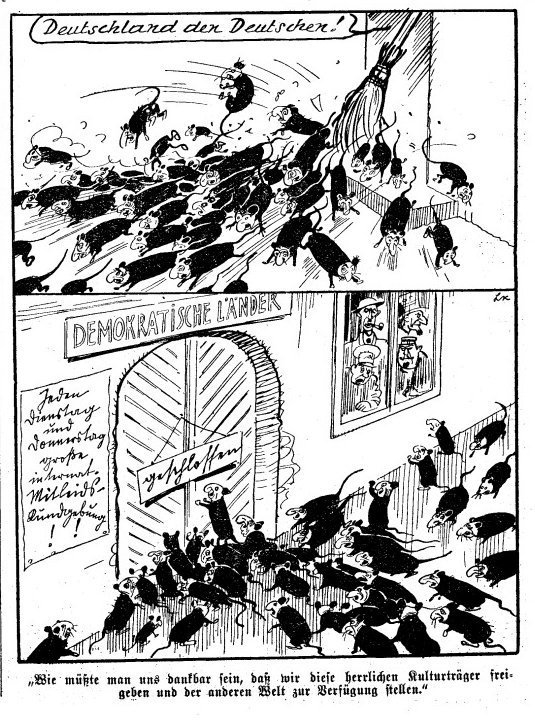 Today, a key argument against accepting refugees is the fear that Islamist terrorists could be amongst their number, a dynamic, it is implied, that is specific to this crisis. Not so. In 1938, there were also widespread fears that amongst those genuinely in need could be hidden dangers to American society: Nazi spies, and Communists. A State Department-approved article published in the Saturday Evening Post newspaper in 1941 warned that “disguised as refugees, Nazi agents have penetrated all over the world”. Even Roosevelt himself warned: “among refugees there are some spies.”

In France, the connection was also made between incoming refugees, communism and Nazi spies. The consequences of the struggle to distinguish between the persecuted and those who presented a possible risk became increasingly clear as conflict escalated from 1939 onwards. In the UK, the government actually interned 27,000 Jews as “enemy aliens” alongside Nazi sympathisers. In one camp on the Isle of Man, 80 percent of those interned were Jewish refugees.

And there was also out-and-out prejudice. Anti-Semitism was clearly a key starting point both for many delegates and the societies they represented. The dehumanising portrayal of refugees as vermin, as bringers of disease and danger and instability, tapped into deep-seated prejudices. But as today's rhetoric shows, there is little about such portrayals that is actually specific to anti-Semitism: chillingly similar language and fears are now levelled at Muslims.

The net result: refugees were widely seen as undesirable. Just five percent of Americans in 1938 were in favour of “allowing German, Austrian and other political refugees to come into the United States.”

The only country that came to Evian with substantial support for refugees was the Dominican Republic. Its delegate, the brother of the then dictator Rafael Trujillo, stated that 100,000 refugees could be accommodated. Excatly why they made the offer is a matter of conjecture: expectation of funds, a need for agricultural workers, and a desire to distract from the 1937 massacres of Haitians are among the theories. In the event, only around 800 refugees ever made it to the Caribbean.

The only concrete achievement of the conference was the creation of the Intergovernmental Committee on Refugees (IGCR), which was to be a voluntary organisation, totally dependent on private funding. It lasted until 1947, although any impact of its work is hard to find, and was wrapped up shortly after the founding of the UN.

There are of course important differences between 1938 and now. The Jewish refugee crisis was deliberately created by the Nazis as part of its strategy to destabilise Europe, and those who left were a small and very specific minority, not an entire population fleeing indiscriminate warfare. Germany was not in the midst of an ongoing civil war in which the head of state was a key protagonist (in 1938, political leaders were still trying to appease and accommodate Hitler).

But today’s politicians, in addition to operating in the post-1951 framework of international humanitarian law regarding refugees, have access to a wealth of data and analysis that their 1938 counterparts did not, particularly that assimilation is possible and that refugees tend to bring net economic benefits. For those who fight for the rights of refugees, the importance of continuing to do so is also clear. One key lesson from Evian: failing to tackle a mass refugee problem is a decision that is neither neutral nor without consequences.
iw/ag