Q: What does Save the Children have in common with drug dealers and extortionists? A: They both accept bitcoin.

(To be fair, they both accept cash, too)

It’s the dark web’s currency of choice: for drugs, blackmail and worse. Its exchange rate has been wildly volatile. Why then are aid agencies, child rights advocates and land activists getting their heads around Bitcoin?

Unlike other tools for transferring digital value, there is no central database or authority. You also don’t need a credit card or even a bank account, giving Bitcoin interesting possibilities for deployment in the humanitarian world.

The blockchain technology behind Bitcoin, the “distributed ledger,” is attracting attention for three main reasons:

1. As a way to transfer value, it can hugely improve what already exists
2. It can do things previously considered too complicated or inefficient
3. It has revolutionary potential for new ways of tackling big, complex problems across a range of industries, not only in finance

About $900 million of venture capital has been invested in blockchain-related startups since 2012, even though few have significant revenue. A “killer app” has not yet emerged to fuel the uptake of the technology. Sceptics and enthusiasts alike say the current hype about blockchains often looks like a “solution looking for a problem”.

With or without Bitcoin, the blockchain is a “breakthrough in computer science” that will have as big an impact as personal computers or the invention of the internet itself, according to influential investor Marc Andreessen.

As law enforcement starts to tackle the Bitcoin phenomenon, pushing back its Wild West reputation, many banks have blockchain experiments under way; in September, nine major banks announced a joint venture, R3, to explore the technology further.
“I don’t think anyone can ignore it,” a New York banking executive told IRIN.

Hackers and bankers agree that Bitcoin is the start of something big. Bitcoin poster, London 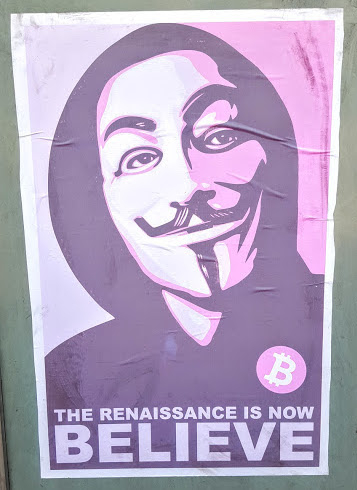 Despite recent focus on “innovation”, humanitarian organisations tend not to be early adopters of new technology.

Catherine Haun, of the US Department of Justice, speaking at a blockchain conference in New York, said Bitcoin was no exception.

While two users of a Bitcoin smartphone app can transfer the crypto-currency between themselves almost instantly, worldwide, the system also records every transaction in an indelible ledger spread throughout a vast network of users’ computers. This, as well as oversight of the on-ramps and off-ramps to real money, Haun said, gives law enforcement a rich trail to hunt for criminal transactions.

But what could the applications be for developing countries and humanitarian situations?

One problem is the limited vendors and money transfer operators that accept Bitcoin – even in the tech-friendliest of jurisdictions. The other is the long arm of counter-terrorism and money laundering legislation.

Anti-Money Laundering (AML), Know Your Customer (KYC) and CTF (Counter Terrorism Finance) regulations have already severely threatened other non-conventional money transfer operations, most notably the remittance companies servicing the Horn of Africa, which provide a link between cash, traditional banking and the hawala system of money transfer. Western banks have gradually dropped these money transfer operators as customers, fearing fines if funds flow to or from extremists, even where no failure of compliance has been proven, or even alleged.

Given the reach of US and other jurisdictions, any Bitcoin- or blockchain-based remittance operator would almost certainly come under the same regulation as banks and money transfer operators.

Everything from houses in Tonga to handbags in Nigeria is already on sale for Bitcoin. In Kenya, another venture, BitPesa, has a three-way exchange running between Bitcoin, banks and the mobile money superstar, M-Pesa. Regulators and law enforcement worldwide will have to catch up, a working group of the Commonwealth grouping said in August. The group urged member states, many of whose economies receive significant income from remittances, to strike the right balance “to ensure they are addressing associated risks and avoid stifling innovation”.

Internationally, the $500 billion remittance industry is an obvious possibility for the new technology. The percentages paid by migrant workers to send money home are punitive to the poor, as the Economist and World Bank agree.

Migrant workers from developing countries pay too much to send money home, the Economist and World B 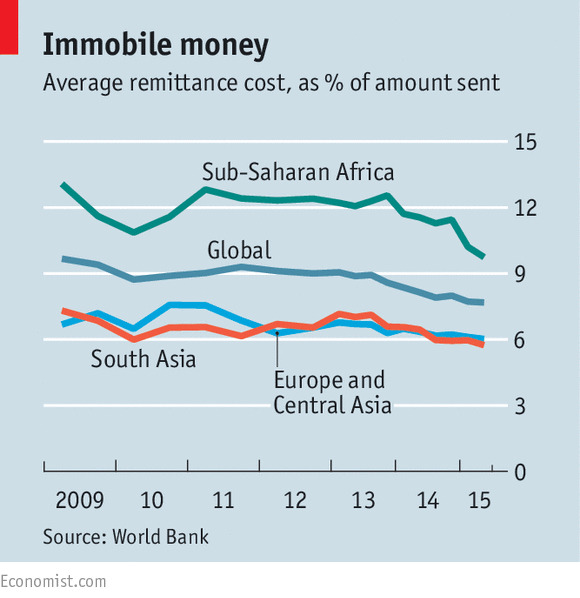 If the middlemen could be squeezed or cut out entirely, a migrant worker in the Gulf could send money any time, without queuing up or paying a cut, and their hard-earned wages would reach home securely, almost in full.

One startup with ambitions to break into the remittance market is Abra, which last month announced $12 million in its latest funding round. Founder Bill Barhydt says Abra aims to be “an Uber for money” – and that people in 80 countries have expressed interest in being agents and vendors for the new system. These agents – themselves on-ramps and off-ramps – Barhydt says, will convert digital value into real cash at either end of the transfer.

In Nigeria, explains Alan Grundy, who works on emergency cash and voucher distribution for the International Rescue Committee, there are about 22 money transfer options, and nine mobile network operators. Getting cash for example into the areas of Nigeria where millions of people are displaced needs a complex set of contracts, interconnections and registrations. 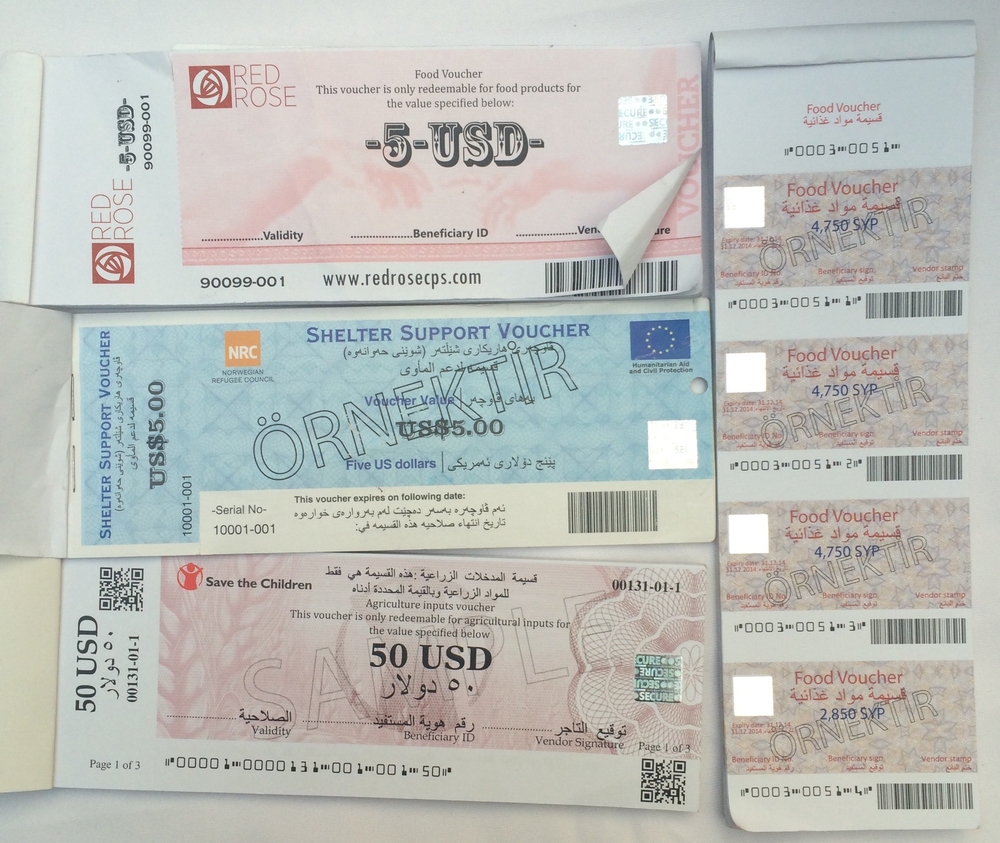 The benefits of cash for humanitarian relief require significant legwork in criss-crossing regulatory, technical and interconnection issues. In countries with developed financial infrastructure, some aid agencies load value onto conventional debit cards that can be used in shops and businesses that take MasterCard or Visa, thereby avoiding national currency issues. In highly volatile situations, such as Ukraine, or places with limited telecommunications and banking, like South Sudan, the appeal of Bitcoin is greater, Grundy explains: “Banking doesn’t want to go there. Fine, I understand that… Remittances are unavailable because they need offices. I get that. Mobile money networks? OK, the cellphone coverage doesn’t get there… We have to look for a technological solution. Is blockchain the way to go? Maybe. It’s the only thing I’ve seen that’s an option.”

Social good initiatives, just like the financial industry, are on the hunt for the killer app for the blockchain. Emergency aid consortium Start Network is exploring a concept of “AidCoin” – a private implementation of the blockchain technology to transfer value in humanitarian settings. They are also looking into smart contracts. This is one of the hottest concepts in the blockchain ecosystem that broadly speaking are an automated transfer of value based on mutually-agreed conditions that can run on top of blockchain technology. In Honduras, a pilot programme is attempting to run a land registry on a blockchain [update: by late-2015 the project stalled], while multiple initiatives are testing concepts of blockchain-based identity registration, including for refugees. A South African firm is suggesting a system in which schools’ electricity meters could be topped up by wellwishers from anywhere using Bitcoin. Bitcoin donations to an NGO project in Kenya promise full transparency of the flow of cash all the way to the end user in real time. The list goes on.

The Bitcoin industry is eager to demonstrate its collective social responsibility too. Dawn Newton is COO of startup Netki. She points to the work of the BitGive Foundation as well as the convenient fundraising potential for non-profits. She admits it has an added advantage – the media do tend to latch onto the lurid stories. Some visible charitable activity might help an “image problem”, she said.