This article is part of our in-depth coverage. Read more like this...
DUSHANBE

The World Humanitarian Summit (WHS) is looking for bold, new ideas for improving the international response to crises. Here are some that caught our ear – some more feasible than others:

A new Special Rep: In 2000, aid workers were attacked 41 times around the world. By last year, the number had risen to 190 (see our interactive map of attacks). Action contre la Faim (Action Against Hunger) recently proposed that the UN create a special mandate holder tasked with raising the issue of aid worker protection with governments and engaging with local authorities and other groups to help them better understand the principles upon which humanitarian aid is based. The UN Secretary-General already has a long list of Special Representatives mandated to cover issues such as: Sexual Violence in Conflict; Children and Armed Conflict; Food Security and Nutrition; Human Rights. You get the picture.

Abolishing UN political appointments: Many of the top UN humanitarian jobs are earmarked for permanent members of the Security Council, long a point of frustration for other states. In an interview with IRIN, deputy UN humanitarian chief Kyung-wha Kang supported the abolishment of political appointments at the UN – one of the recommendations to emerge from the WHS consultations.

A humanitarian World Bank: A UN panel looking into disaster funding has considered the idea of a humanitarian counterpart to the World Bank that could provide a more stable source of financing for crises. But it is rumoured that the World Bank is not thrilled at the idea, while senior humanitarian officials have rejected it as a non-starter. The World Bank functions on the basis of loans and investments. “The question is: how can you replenish resources of a bank for humanitarian assistance that does not bring any return?” Hesham Youssef, Assistant Secretary-General for Humanitarian Affairs at the Organisation of Islamic Cooperation, asked at a recent WHS consultation. “We’re talking about a new mechanism pretty much with the same donors. And we have challenges with donor funding of the existing financial mechanisms,” added Ertharin Cousin, head of the World Food Programme (WFP).

Calculating national aid spend: Official humanitarian aid spending is predominantly measured through the amounts governments and the public donate to other countries. But in reality, these numbers are dwarfed by national government spending on humanitarian needs in their own countries – and that is rarely counted. A recommendation to start incorporating domestic expenditures, in-kind support and other contributions “sounds so subtle, but it’s actually very powerful,” said WHS Secretariat Chief Jemilah Mahmood. That’s because it defies the myth that Western donors are the only ones depleting their budgets to support people affected by crisis. A shift in how the numbers are calculated could also lead to a shift in perceptions of who is carrying most of the load. Currently, the Organisation for Economic Co-operation and Development, which tallies official Overseas Development Aid, does count what governments spend domestically to host refugees, but only in the first year of their stay.

New CERFs: The Central Emergency Response Fund is a UN-managed voluntary fund that pools several hundred million dollars a year from donors large and small. It can release funding relatively quickly, but only to UN agencies. Some, including the boss of the UN’s refugee agency, UNHCR, have suggested a Super-CERF: a mandatory fund that UN member states would contribute to as part of their dues (as they do for peacekeeping operations). Others have suggested a CERF for preparedness. Time and again, humanitarians spout the statistic that $1 invested in preparing for disasters saves $7 in responding to them, yet governments do not sufficiently fund “preparedness” activities. Politicians find it easier to sell aid spending to voters when a disaster hits – constituents are much more likely to support aid spending when images of starving children or a tsunami uplifting homes are broadcast on television. According to one UN official, when an aid agency applied to the CERF to prepare for a possible outbreak of Ebola in Ivory Coast, it was told: “Come back to us when you have a few Ebola cases.”

International levy for refugees: Countries neighbouring Syria continually complain that they carry a disproportionately heavy burden in supporting fleeing refugees. In Jordan, for example, Syrian refugees access subsidised food, education and healthcare – at a heavy cost to the government. One recommendation would see a pooled fund cover an international social protection package for long-term refugees, so that their basic health and education costs, as well as vocational training and livelihood grants, could be taken care of by a central reserve to which all governments would contribute, perhaps as a percentage of their GDP. Partnerships with private sector service providers and insurance companies could reduce costs.

Unloading and distribution of humanitarian supplies from #UNICEF in the hospital number 4, #Donetsk. 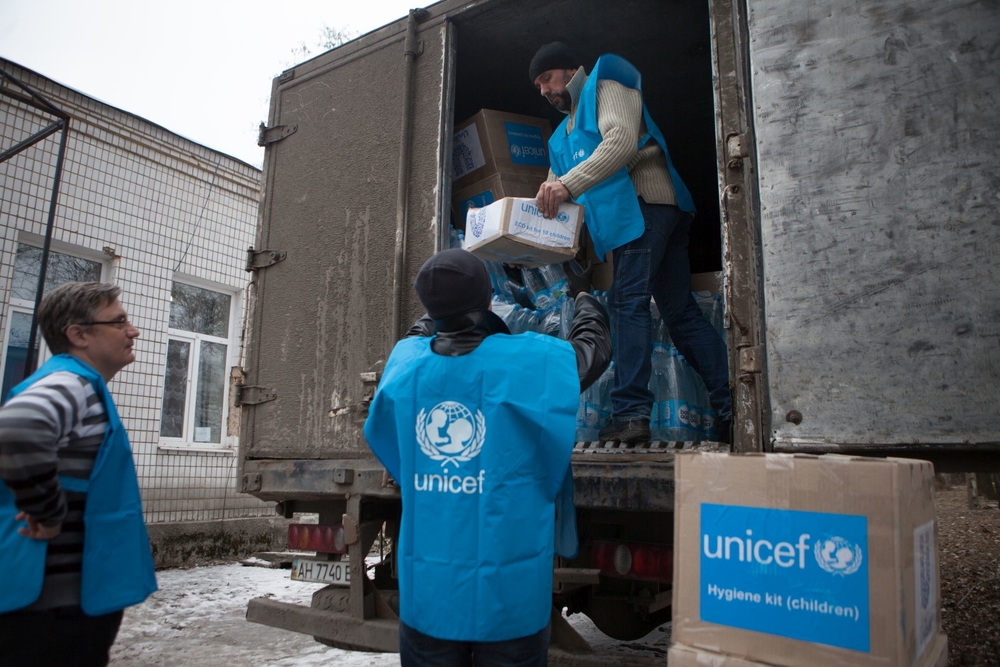 Pooled fund for local NGOs: As IRIN has reported, local NGOs receive a tiny – and indeterminable – share of direct* humanitarian financing. This means local organisations closest to the ground have the least say in how aid is delivered. Several fora – within WHS and beyond – have suggested that 20 percent of humanitarian financing should be automatically directed to local NGOs, possibly via a pooled fund. But who would manage it? Rumblings that the UN’s emergency aid coordination body, OCHA, would be in charge has left some asking whether an NGO consortium would not be a better fit. (See the deputy head of OCHA’s view on that here). But any transfer of funding to local NGOs – often less experienced and less trusted – would need the consent of donors, who are traditionally risk-averse. As OCHA moves increasingly towards funding local NGOs via its own pooled funds, it has developed new guidelines on how to vet local NGOs, which donors appear to accept.

Facilitating remittances: Nationals of developing countries working abroad send home some $436 billion every year – a key, and usually unrecognised, source of capital for humanitarian response in crisis situations. How can aid agencies help protect access to remittances by affected communities? WFP, for example, considered adding remittance transfers to the voucher cards it distributes, but the idea quickly ran into concerns from lawyers who worried counter-terrorism legislation would be a blockage. In a statement following WHS-linked consultations, the Humanitarian Forum, a network that aims to build trust between Muslim aid organisations and their Western counterparts, also recommended that aid agencies form working partnerships with diaspora communities in order to better use their “knowledge, networks and dedication” to improve aid efforts.

Pooling risk: The African Risk Capacity is an agency that allows governments to pool their risk of being exposed to drought. Because an individual country is at a higher risk of being exposed to drought than the entire continent, by approaching insurers as a group, countries need not pay as high a premium. ARC argues that it has allowed governments to save half of what they would normally spend on contingency funds. If a severe drought hits, ARC pays up to $30 million per country per season. Why not use this kind of model to support governments in dealing with other natural disasters, such as floods, earthquakes, tsunamis?

Legal status for IDPs: A record 60 million people were living in forced displacement worldwide last year, two-thirds of them displaced internally within their own countries, with less legal status and protection than refugees who cross international borders. One recommendation would see states enact legislation to provide adequate protection for internally displaced people (IDPs), drawing on the UN’s guiding principles on internal displacement, a non-binding “soft law” concept.

INGO Charter for Change: Aid agency CAFOD is spearheading a “Charter for Change” that would see international NGOs vow to localise humanitarian aid through eight core points, including increasing direct funding to southern-based NGOs, increasing transparency around how much they give local NGOs, compensating local organisations if they contract their staff, and increasing the portion of their budgets that go directly towards capacity building. Organisers will launch the Charter at the WHS global consultation in Geneva in October. Details here.

Capitalising on religion: The international aid system has traditionally been shy about – if not afraid of – the role of religion in humanitarian response. But consultations have highlighted the crucial role of faith-based organisations and religious leaders in reaching those most in need and in spreading principles of international humanitarian law (IHL). One suggestion would see IHL more consistently taught to religious studies graduates in different countries. Following on from reports by IRIN and the Global Humanitarian Assistance programme of Development Initiatives, WHS and the UN’s High-Level Panel on Humanitarian Financing are also conducting the first serious institutional examination into how Islamic financing could fill part of the gap in humanitarian financing. The Turkish government is said to be piloting the provision of emergency education using waqf (Islamic endowment) and sukuk (Islamic bonds).