Disaster coverage now seems incomplete without amazing drone footage of the damage, accompanied by effusive media reports on the technological wizardry of unmanned aerial vehicles (UAVs) and their humanitarian application. But is that really the story? Here’s a look at the evolution needed for them to better fulfill their potential.

Right tool for the job?

The advantage of UAVs is that they are a fraction of the cost of manned aircraft and the smallest can fit into the hand luggage of a humanitarian response team. They provide very high resolution imagery and can carry an array of sensors. “They provide extra information in the phase where you need a quick overview,” explained Arjan Stam, overall leader of international Urban Search-and-Rescue units in Nepal.

But misconceptions remain, including within the humanitarian community, over what UAVs can achieve. “People who have not seen UAVs often think of the military versions that can fly a long way and carry heavy payloads,” said Andrej Verity of the UN’s Office for the Coordination of Humanitarian Affairs (OCHA).

Commonly used micro-UAVs, like the quadcopter DJI Phantom, has a flight time of under 25 minutes and doesn’t fly in high winds and bad weather. There are larger, more capable UAVs, but drones are far from always the answer. In many circumstances old-fashioned helicopters, manned aircraft and people doing assessments on foot are better options.

“If we prioritise using the cool new toys instead of choosing the collection platform that meets needs and constraints, we risk being less useful than we could be and probably slower,” said John Crowley, an affiliated researcher at Harvard Humanitarian Initiative. “[UAVs] can be amazing assets when they fit into a larger system that makes it safe, secure and legal to use them – [that requires] trained people, clear policies, and established protocols.”

UAVs in disaster response are largely privately operated. There are currently 10 UAV teams in Nepal, from Canada’s Global Medic to California-based Team Rubicon, whose philanthropic partner is US intelligence-linked data mining firm Palantir. Encouraging adherence to standard operating procedures and maximising the humanitarian value of these diverse teams has historically proven a challenge.

“Disaster responders in an emergency are generally too overwhelmed to lead on innovative methods,” Crowley told IRIN. “A disaster is rarely the time to introduce unfamiliar tools with lots of elements that require coordinated action between several organisations.”

Keeping on the right side of the law can be the first challenge. While some countries have UAV legislation in place to cover safety, privacy, national security and insurance liability, many do not. Where no regulations exists, UAV flights are either cleared with national authorities on an ad-hoc emergency basis, or are flown without permission – a reality that has a host of implications.

Then there is the glaring gap in the humanitarian response structure to facilitate UAV use. OCHA serves as the secretariat for critical coordination mechanisms like the Inter-Agency Standing Committee and the UN’s rapid-response Disaster Assessment and Coordination system and International Search and Rescue Advisory Group. But it has no formal oversight role as far as UAV operations are concerned, and has been cautious in claiming a mandate.

Who can we talk to?

In the Philippines, during Cyclone Haiyan in 2013, there was little coordination or clarity over how UAVs were to be used. OCHA then worked with the authorities on recognizing the value of UAVs and including them in national disaster response plans. But in 2014, when Cyclone Hagupit arrived, there was only an ad-hoc link between UAV operators, the humanitarian community and the government.

In the wake of Cyclone Pam that tore through the Pacific islands of Vanuatu earlier this year, a World Bank project used the volunteer Humanitarian UAV Network (UAViators) to provide damage assessment imagery. There was better engagement with the government and military on basics like flight path clearance and notification to local communities, but the arrangement was still informal.

In Nepal, UAViators has taken the lead in engaging with the civil aviation authorities and the police, but it lacks institutional clout. For drones to be better established, the founder of UAViators, Patrick Meier, argues what is required is “strong backing or leadership from an established humanitarian organisation that is able and willing to mediate with appropriate ministries.”

In a Skype conversation with IRIN, he added: “The UN has not designated a formal focal point for UAV flights who can serve as liaison with [government]…. This is a big problem, as UAV teams need formal letters confirming that they are part of the humanitarian response. Also, we need this focal point to serve as initial liaison with ATC [air traffic control] and the military. In sum: [it is a] major institutional gap here.” 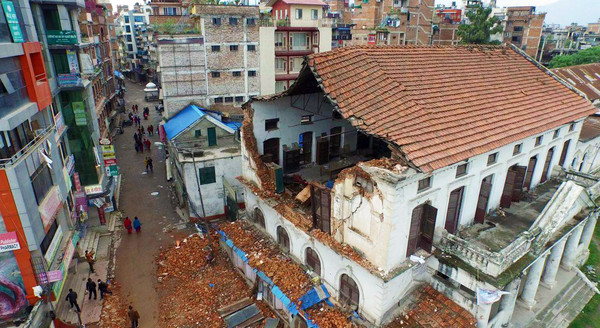 But in a disaster, where aid agencies and government officials are scrambling to respond and capacity is stretched so thin, should the appointment of a focal person to work with UAV operators always be a priority?

The purpose of UAV imagery is to help better shape the humanitarian response.

To get proper value out of UAVs “we need to make sure that we’re as clear as possible on where imagery needs are greatest, where the gaps in coverage may be, and how those imagery needs are going to be connected directly with practical relief efforts,” Andrew Schroeder, director of research and analysis at Direct Relief, a medical aid charity, told IRIN.

“We need an easy way for people and organisations to express where and why they need imagery so that priorities can be established quickly and those with skills and access to the technology can be appropriately tasked. We need to make sure that we’re sharing data effectively and adhering to open standards,” said Schroeder, who chairs the UAV working group at Nethope, an NGO consortium.

But the reality is that people can be averse to sharing. This can be due to legal and political considerations, with some humanitarian organisations leery of associating too closely with private UAV teams, or data hoarding by the drone operators.

“Some UAV teams have not (yet) expressed an interest in sharing their imagery. Some have not provided information about where they’re flying,” Skyped Meier. “Of course, they are incredibly busy. And besides, they are not required to share.… [W]ithout strong public backing from established humanitarian groups, there is little the network can do.”

“Data is power, and people perceive it that way,” said Nama Budhathoki, the head of Kathmandu Living Labs. His team of volunteers is working with OpenStreetMap, a crowd-sourced geographic information system (GIS), to map the impact of the Nepal quake.

A significant impediment to working with UAV imagery is the size of the data files, which in the case of a country like Nepal, with low internet bandwidth, impacts on the speed with which data can be analysed.

“Aerial imagery typically constitute large files, which means they take longer to upload, and with unreliable or low bandwidth it can take multiple repeat attempts to upload just one mosaic [GIS maps are composed of a multitude of data mosaics],” said Meier.

“Figuring out file transfers from the field… this is a huge problem… and getting it out of disaster zones is really not easy. We need to treat the logistics for this as seriously as the damage assessment,” Robert Banick, a GIS expert at the Assessment Capacities Project, told IRIN.

“I think we’re so excited about the possibilities of UAVs and so challenged by making it work that we’re not giving full attention to the data analysis,” he added.

Kathmandu Living Labs is trying to reduce the dependence on external analysis by using local mappers, who have the additional advantage of a “better sense of location and geography,” said Budhathoki.

His goal is not only to build sustainability in GIS, but also to develop a local “UAV capacity within Nepal.” It’s a project that Meier and UAViators are collaborating on.

Reducing the need for external assistance by assisting national authorities and local NGOs build their capacity in high disaster risk countries like Nepal would be a step forward.

Caterina Pino is a strategic policy and development advisor. She has worked for OCHA’s Regional Office for Eastern Africa, and the Somalia country office. In her last OCHA assignment, Caterina advised the Philippines government on how to include civilian UAV capacity in their disaster preparedness and response plans. Obinna Anyadike is IRIN's Editor-at-Large.