Currency fluctuations this year could cost relief agencies hundreds of millions of dollars in lost income, threatening aid to millions of people around the world.

A drop in the value of the euro against the dollar and a spike in the Swiss franc have contributed to shortfalls in funding for the World Food Programme, the International Committee of the Red Cross and the UN refugee agency (UNHCR), among others.

At a time when UNHCR is already struggling with insufficient funding amid an increasing number of global crises, it now has to cut up to $190 million from its global 2015 budget, the agency told IRIN.

“The shortfall [in funding] is larger than what we expected, and that affects both priority activities already planned, and potentially new emergencies that may arise,” spokesperson Ariane Rummery said.

UNHCR has already begun implementing the cuts – which represent 7 percent of its expected $3.5 billion operating budget this year. Assistant High Commissioner for Operations George Okoth-Obbo told an NGO conference in Geneva earlier this month UNHCR is now instructing some of its partner NGOs to stop recruiting staff for projects that were already agreed.

The value of the euro has been declining since last summer due to a combination of political issues and economic policies, but has fallen another 12 percent against the US dollar since January. Of UNHCR’s top 20 donors, seven pay in euros including the European Union.

The euro and euro-pegged currencies together make up some 30 percent of UNHCR’s usual contributions, but devaluations in the Japanese Yen, as well as the Canadian and Australian dollars, are also affecting the value of anticipated contributions, Rummery said.

NGOs based in the Swiss city of Geneva, a global aid hub, have also been vulnerable to fluctuations in the value of the Swiss franc, which rose by 30 percent against the dollar in January overnight after the Swiss National Bank lifted a fixed exchange rate leading the currency to rise from 1.20 against the euro to equal.

“Overnight, [our Geneva costs] probably went up 15 percent or so,” said Jamie Macdonald, finance and administration coordinator at ACAPS, a Geneva-headquartered organisation that researches humanitarian needs. “It was a big concern.”

The losses of about $300,000 led ACAPS to cut deployments to the field and scale down other activities. The Swiss franc has risen slightly and now trades at 1.05 euro but agencies are still wary.

More than 250 humanitarian, human rights and development organisations are headquartered in Geneva, but have operations around the world. For them, the currency fluctuations have had mixed results. Those largely funded by the Swiss government who spend in Swiss francs have not been affected. But those funded in other currencies – especially the euro – and spending domestically have seen their budgets shrink overnight.

ICRC declined to give exact figures but said it would need to appeal for more money to cover the income lost in exchange rates.

“With increasing humanitarian needs around the world, we've launched a record budget for 2015 and in the first half of the year are asking for additional funds for seven countries,” said spokesperson Dorothea Krimitsas. “We need more money to cover these needs, and the fluctuations are exacerbating the situation."

For the World Food Programme, headquartered in Rome, about 60 percent of contributions received in 2014 were in US dollars and 20 percent in euros.

“At current rates, the expected 2015 euro inflow will bring around six percent less income (in USD), in part offset by about three percent less worldwide expenditure due to the stronger US dollar,” WFP spokesperson Jane Howard told IRIN. 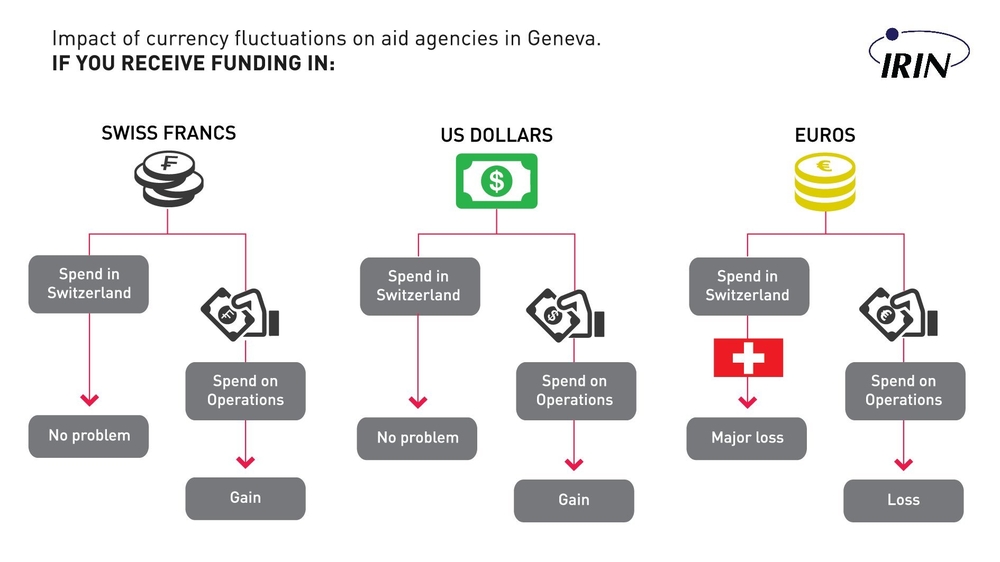 Over the years, aid agencies have developed mechanisms to protect themselves from currency volatility, including pre-agreed exchange rates with donors and suppliers. But this year’s fluctuations were particularly fast and extreme, and many agencies are only now coming to terms with the possible impact.

UNHCR’s cuts in particular are likely to affect the work of NGOs around the world. Rummery said the agency would seek to prioritise the most essential work.

“Core protection and life-saving activities won’t be cut [but] in other sectors, there will need to be reductions or delays in activities.”

She did not specify which ones, but Daryl Grisgraber, of the advocacy group Refugees International, said education and psychosocial support programmes are often first on the chopping block.

“If this is a global cut, that is probably going to mean cuts across the board for anything that is not life-saving,” she said. “Education and psychosocial are some of the areas that could be cut as they are not considered urgent.”

She said the cuts would have a major negative impact: “Refugees themselves will get more and more desperate and do desperate things – for example migration at sea.”

The number of refugees, asylum seekers and internally displaced people globally rose above 50 million last year for the first time since the Second World War. While funding for UNHCR has risen, it has not kept pace with needs.

“Year after year humanitarians have to do more with less,” Grisgraber said.

In Afghanistan, where aid funding has been on the decline in recent years, Danielle Moylan, protection and advocacy manager at the Norwegian Refugee Council, said the country’s refugees and displaced “cannot face more budget cuts.”

“The humanitarian community in Afghanistan [is] working hard and [is] committed to staying the course, but without appropriate funding, millions of needy Afghans will not receive humanitarian assistance.  We are already in the grip of a humanitarian crisis and Afghans are being pushed to the brink.”

As part of its cuts, UNHCR is also seeking to reduce staff positions by five percent – up to 500 jobs. The agency currently employs 9,300 staff in 125 countries.

Rummery said it would seek to avoid cutting existing staff jobs, by instead leaving vacant posts empty. Regional offices will have the flexibility to decide how cuts are made across their different operations, she added.

UNHCR is also continuing to review the costs of its headquarters in Geneva – one of the most expensive cities in the world, now exacerbated by the rise in value of the Swiss franc. In line with other organisations, in recent years, UNHCR has moved some parts of its work to Budapest and other cities in part to cut costs.

Rummery added that UNHCR hopes to cut refugees’ dependence on aid by advocating for better working rights for refugees. “Wherever possible refugees should be allowed to earn their own incomes.”

But many governments appear headed in the opposite direction. Lebanon, for example, which hosts over one million registered Syrian refugees, has forbidden them from any employment.