The build-up to the 2016 World Humanitarian Summit in Istanbul is gathering pace, but what guarantees are there that anything will actually be accomplished?

The two-year, UN-led process is meant to foster a global conversation - with clear outputs and recommendations - on how to improve humanitarian response.

Aid workers say the consultations are succeeding at engaging an unprecedented spectrum of voices, but many fear the process still lacks any clear framework for turning talk into action.

So far the #ReShapeAid conversation has been dominated by calls to respect humanitarian principles, focus on local approaches and find more flexible funding.

Other issues around who should be doing what when, the rights of internally displaced people, and the importance of political solutions to humanitarian crises are also vying for spots on the final Istanbul agenda.

But these are hardly new debates within humanitarian circles. IRIN spoke to a range of participants to assess whether the main discussion points can translate into meaningful, systematic change.

What is WHS trying to achieve?

An initiative of UN Secretary-General Ban Ki-moon, the core aim of the WHS is “to propose solutions to our most pressing challenges and set an agenda to keep humanitarian action fit for the future”.

Unusually for a UN-led process, there is no fixed agenda. People can raise issues in person at the consultations (providing you make the guest list) or via an online messaging system. Among those attending the various events are UN agencies, international and national NGOs, Red Cross and Red Crescent organisations, academics, private sector companies, government representatives and the people affected by crises themselves.

“It’s a very innovative process in the sense that unlike many international summits and conferences it doesn’t have a pre-cooked outcome so the agenda is evolving and what will eventually emerge in May 2016 will depend on what is said during the process,” explained Alex Betts, director of the Refugee Studies Centre at the University of Oxford.

“I think the really exciting part is that in theory all voices can be heard, but of course the challenge is how to ensure that you do hear all voices, and that you do get genuine representation in the final outcomes,” added Betts, who attended the regional consultation for Europe, North America and Australasia in Budapest in early February.

Jean-Yves Penoy, interim Europe Director for the Norwegian Refugee Council (NRC) also welcomed the diverse attendance. "These people do not get together for two days very often and specifically the donors are not that often in touch or in such contact with the UN, so from that point of view, I think it was interesting."

WHS secretariat chief Jemilah Mahmood told IRIN: “As a secretariat, we are here to listen and bring together as many different perspectives as possible.

What are some of the main issues* that have been discussed so far?

Haven’t we heard a lot of this before?

Yes, to some extent. But this is the first time the topics are being discussed so openly and by so many different stakeholders from across the humanitarian spectrum at the same time.

“One of the most interesting outputs from the summit process is the dialogue itself,” Betts said. “The fact you have so many different stakeholders and perspectives engaging in dialogue and listening to one another in a forum that is not dominated by states is in itself unique and valuable.” 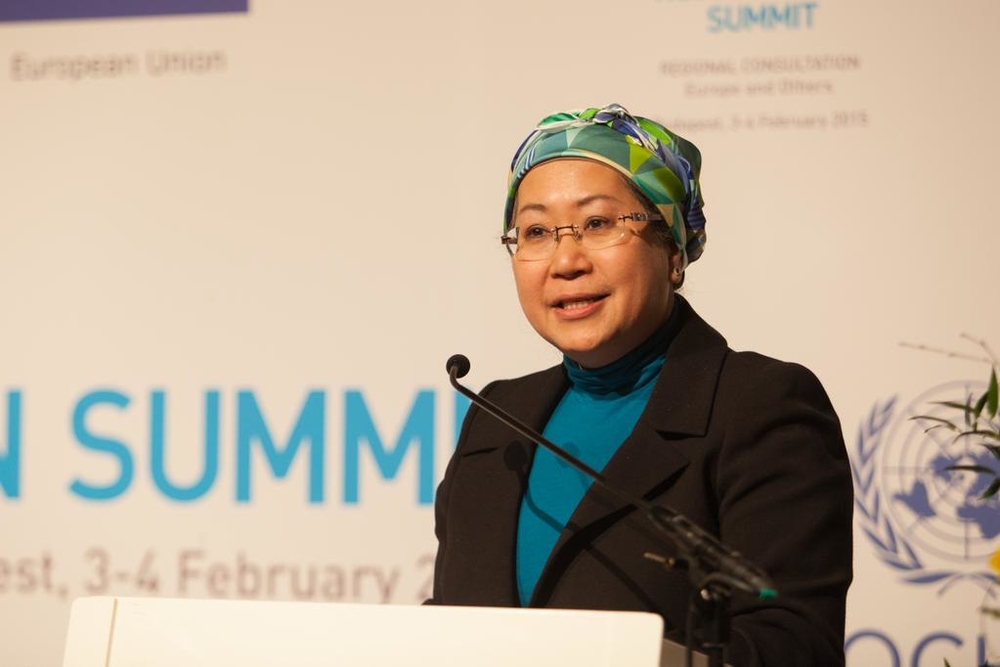 Mahmood acknowledged many of the issues raised at the meetings were not new. “We may have been talking about these things among ourselves for years,” she said. “But now we are saying them out loud, consulting the broader public, affected people, the private sector, and governments.”

She referred to a discussion between the UN agencies in Madagascar, the private sector and its government at a consultation in South Africa in October 2014. The result was the set-up of a new disaster platform that was successfully applied months later when storms hit Madagascar.

“It’s easy to sit back and be critical towards the process, but just seeing one example of the reality of how these conversations and the energy and the excitement from the regional consultations led to a fruitful outcome like this, this is a reason for me to be optimistic,” she said.

Word cloud of random words associated with the WHS consultations 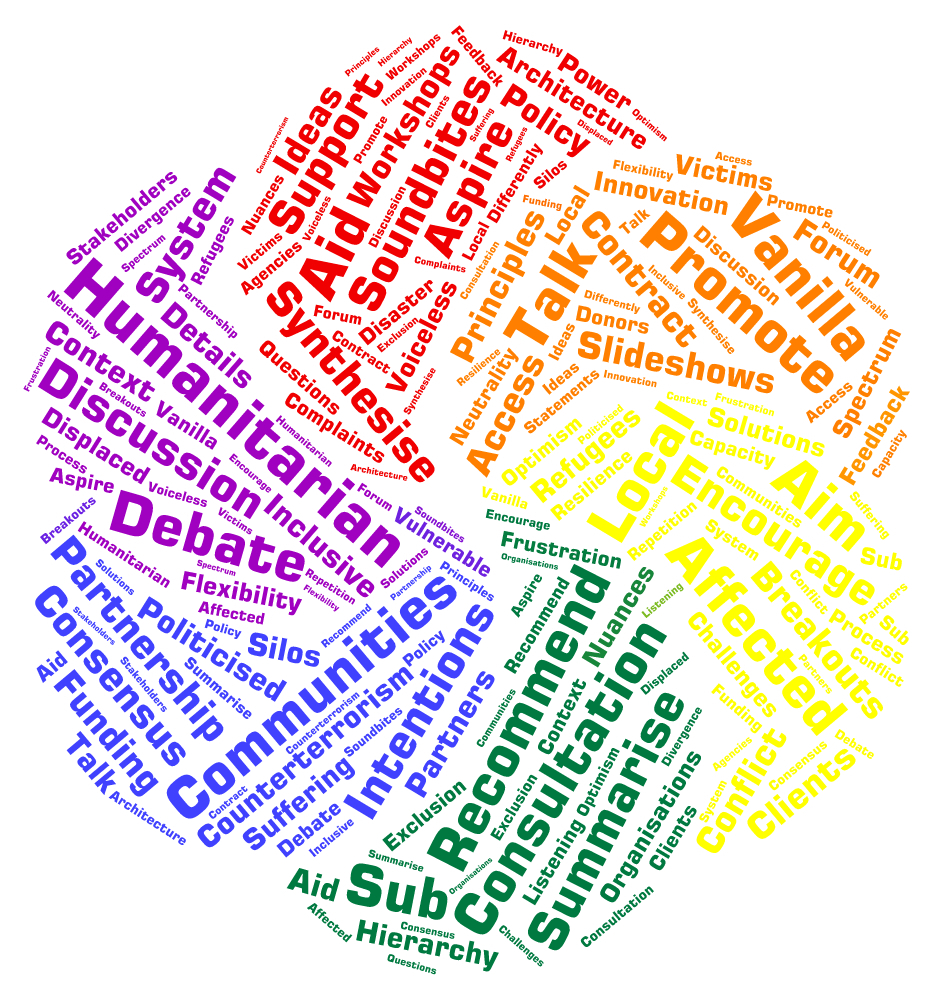 How will this go from talk to action?

This is the great unknown.

The summary of the most recent consultation in Budapest is awash with non-committal verbs such as “consider”, “promote”, “encourage”, “support” and “aim for” - hardly pointing to radical system change and political challenge. Final reports from each event are more detailed, but still cloaked in jargon and ambiguity.

“There was plenty of consensus around giving local organisations a stronger role, about stopping them being crushed by the system, and about ‘doing things differently’, but what wasn’t clearly articulated is what does ‘doing differently’ really mean?” noted Mike Noyes, head of humanitarian response and resilience for Action Aid UK, referring to the Budapest consultation.

Mike Penrose, executive director for Action Contre la Faim (ACF), who also attended the Europe meeting, said NGOs worried how the meaningful debate would be distilled and about the premature application of a “political filter”.

“We need to be brave and pose difficult questions,” he insisted. “If we don’t, and if we filter everything beforehand and we ask vanilla questions, then the conclusions will be vanilla and the failure of the system will be our fault. But if we pose the really difficult questions to world leaders and they chose to ignore them, then it’s their fault.”

How free and inclusive has the process really been?

Several people have expressed disappointment about what they have described as a “lower-than-expected” representation of crisis-affected communities and civil society actors. There have also been grumbles among NGOs working in the Middle East about the choice of representation at the regional meeting.

“There will always be questions about who is there and who isn’t there, but there has been a system for people to feed in via the internet and there is a structure in place to manage input from remote participants, so compared to other processes, this has been particularly inclusive,” Claus Sorensen, director general of the European Commission’s humanitarian aid arm, ECHO, told IRIN. “The secretariat has made a real effort to make this a bottom-up approach.”

Brushing off the criticism, Mahmood said: “We cannot bring 1,000 affected people into a meeting, and that is not how they want to be consulted anyway.” And she added that NGOs were running parallel focus groups in order to collect feedback from communities.

What’s the general feedback on the process?

On the whole, while some cynics dismiss WHS as “paying lip service to change”, most feel they have no choice but to do their best to ensure WHS succeeds, at least in some form. They acknowledge the humanitarian system is struggling to support its ever-growing global caseload and hope the debate will lead to change in the right direction, even if it is unlikely to deliver seismic movement.

“Everyone is wondering what is going to be the outcome,” said Penoy. “It’s unlikely it’s going to be revolutionary, but I think there is potential for good.”

Mahmood readily accepts the size of the challenge. “We need to manage expectations,” she said. “I don’t see the summit as the end point. I think the summit will lay the groundwork to set out key areas that require shifting.”

The summit cannot be everything to everyone, she added.

“It will not make everyone happy and I think this is something we have to live with. But if it leads to better outcomes for people whose lives have been uprooted by conflict or disaster, and whose futures are uncertain, making even a small difference in their lives, then I will be happy with that.”

Noyes praised “a willingness to listen and a willingness to learn from experience” but warned that whatever is ultimately agreed in Istanbul will still need political approval and implementation.

“Particularly if there’s massive system change proposed, that’s going to be a challenging process that will take time,” he said.

The next regional consultation, focusing on the Middle East and North Africa, takes place in Jordan from 3-5 March.

* This is a list compiled by IRIN based on our own research and interviews.
For more detailed information on topics being discussed, see the WHS website.