Of all the hurdles to peace negotiations between Israeli and Palestinian leaders, perhaps the largest is the 150 or so Israeli settlements in the West Bank. These communities, considered illegal by the UN, are fracturing Israel’s relationship even with its allies: The pro-Israeli head of the UK parliament’s foreign affairs committee this year declared that a decision to develop a new settlement “outraged me more than anything else in my political life”.

Despite an unofficial freeze on settlement planning, in late December the Jerusalem Planning and Budget Committee set the stage for approving building permits for some 400 homes on Palestinian land in Jerusalem, and approved a plan for 1,850 more homes in a neighbourhood that sits on the border.

While they are often thought of as the result of a religious quest by Jews to claim new territory, in fact for most settlers the reasons for moving are economic - encouraged through government-planned incentive schemes to relocate. But for some, the process of living in a settlement may have a radicalizing effect.

It’s a weekday in the West Bank town of Ariel. Students share a cigarette break on the university campus. Two women walking their dogs chatter in Russian-accented Hebrew. Nothing suggests this is anything other than an ordinary Israeli town.

But while it is not known for a strong ideological bent or violent attacks on its Palestinian neighbours, jutting out some 16km east of the Green Line that divides Israel from the Occupied West Bank, this town of 19,000 is very much a settlement.

In Ariel, many residents live the Israeli commuter lifestyle. There is a direct motorway to Tel Aviv, less than 40km away, with buses running frequently to the city and less often to Jerusalem, 50km away.

“People come here looking for different things,” said Avi Zimmerman, head of Ariel’s Development Fund and the de facto spokesperson for its municipality. As an observant Jew, he came eight years ago looking for a heterogeneous community.

“You’ll find people who came for the quality of life, even for the relief from the humidity of Tel Aviv.”

An advert for new homes for sale in the Israeli settlement of Ariel. The settlement is among around 150 declared illegal by the United Nations but supported through Israeli economic subsidies. 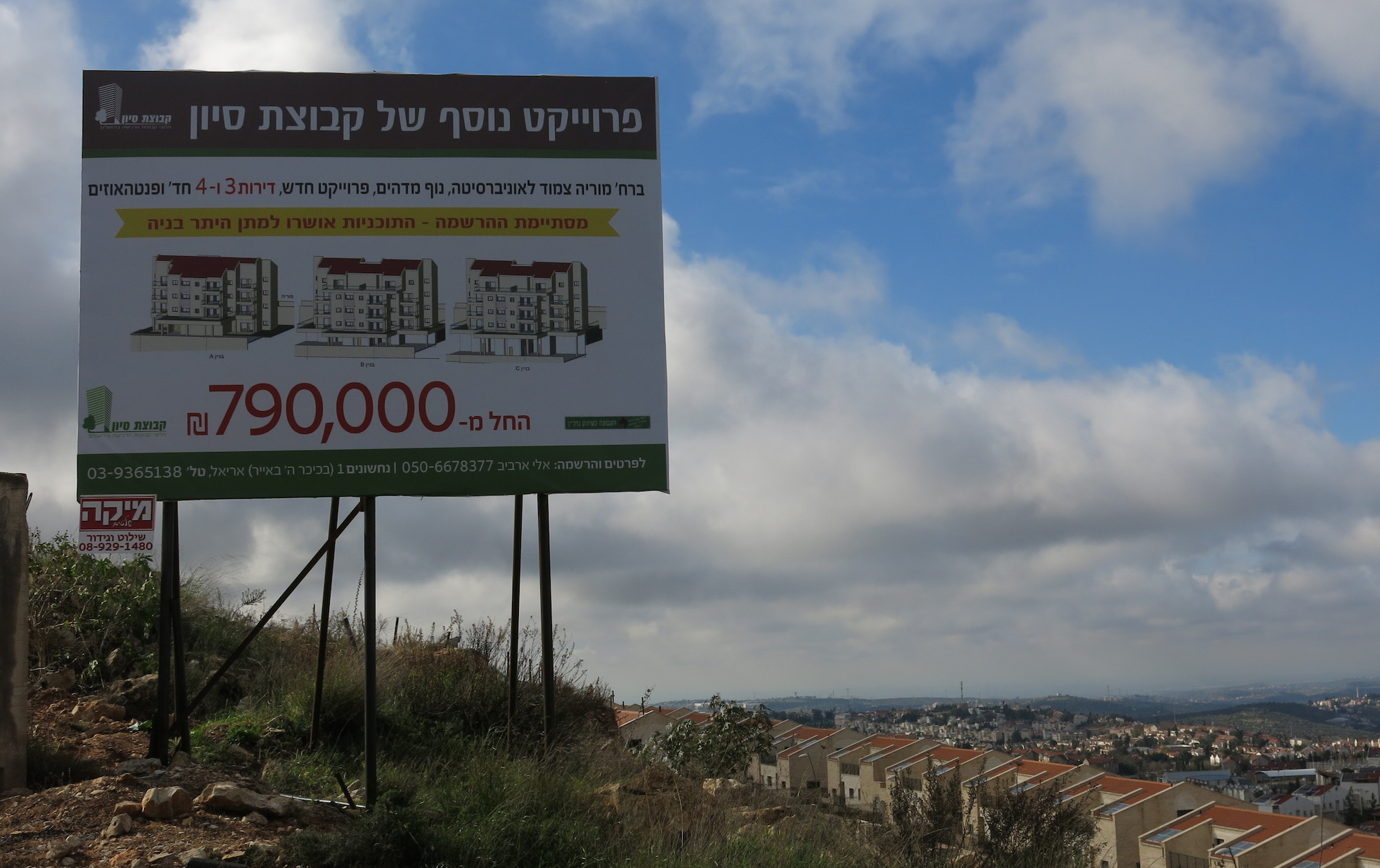 Cheap rent made Noa and her boyfriend temporary settlers in 2009 when they started looking for a place near her Jerusalem university. “We were both students and we needed a cheap place to live,” explains Noa, a dance teacher in her late twenties. They couldn’t find anything in their price range in Jerusalem, but in Anatot, a community of 1,000, 7km over the Green Line, the price was right.

Amit, a 34-year-old mother of one, sees her settlement - although she doesn’t call it by that name - 5km over the Green Line as just another suburb of Jerusalem. She and her husband had lived in the city, but when they went looking for a home she wanted “a house, a garden and a parking lot… and the green parks and closeness to Jerusalem were a big thing.” She commutes to Jerusalem for work, and her husband to Tel Aviv: “I don’t see this as contested land,” she emphasizes, but “for me it’s a suburb of a big city and I come back at night.”

According to the Yesha Council, an organization that represents and campaigns for West Bank settlements, at last count in June 2014 there were 382,031 Jewish settlers in the West Bank, not including East Jerusalem, which Israel does not consider occupied. This draw across the Green Line has been encouraged by consecutive Israeli governments.

Much of the state’s help comes through the definition of roughly three-quarters of settlements as “national priority areas”, along with other areas that are deemed to need a boost - communities close to the borders with Lebanon or Gaza, or otherwise peripheral and underdeveloped.

Investment in settlement infrastructure such as roads is also key, and teachers who live in settlements receive generous assistance, including what the Israeli NGO B’tselem reports as 15-20 percent salary boost and government coverage for 75 percent of travel and 80 percent of home rental expenses. As national priority areas, the settlements also receive extra investment in education, including increased school hours and more funding.

Direct benefits to individuals have mostly been eliminated, with an income tax break lifted in 2003, allowing many in the settlement community to argue that that the settlements should be considered like any other Israeli city.

Avi Zimmerman, head of Ariel’s Development Fund and the de facto spokesperson for its municipality, disputes the idea of unfair economic incentives drawing people onto Palestinian land. “People talk and talk about incentivization because of the past.” Now, “there are no direct incentives - you don’t get a bank loan, [for example].”

Natan Sachs, a fellow at the Brookings Institution’s Center for Middle East Policy and an expert on Israeli politics, agrees that there are “no direct incentives in the sense that there aren’t grants.”

But “there are lot of ways” to encourage settlement, “in particular the cost of land and permits… There is no overt incentivizing but there is still dramatic incentivizing in real terms.”

The increase in “quality of life” settlers is a major shift from the settler movement’s origins in the late 1960s, when after its victory in the 1967 war with Egypt, Jordan and Syria, Israel began moving its citizens into what it refers to as Judea and Samaria, the biblical names for the occupied West Bank.

Many early settlers hoped to reclaim what they saw as biblical Israel, as Elie Pierpz, director of external affairs for the Yesha Council, explains.

“Religious consideration was a major driver of growth in the 70s and 80s. There is an ideological capacity - this is the last Zionist frontier; 100 years ago it was Tel Aviv, 60 years ago it was the Negev [desert in the south of Israel] and the … [northern part of the country], and for the last 47 years it has been Judea and Samaria.”

The phenomenon of the economic settler is a mixed bag. Ariel, for example, is a blend of immigrants from the former Soviet Union - secular and religiously observant but non ultra-Orthodox Jews.

Dror Etkes, an expert on settlements, argues that the difference in terminology between economic or quality of life settlers and their more ideological counterparts can’t really be justified - all are part of the larger occupation project, whether they like it or not.

“When ideology meets economy its always nicer, and the ideology eventually comes to align with self interest. People tell themselves stories … it’s very easy to be a settler. Whatever you don’t want to see, you don’t have to see.”

Yet settlements, even those dominated by economic migrants, can shift beliefs towards the right.

Etkes notes that several recent violent attacks on Palestinians have come from these so-called “non ideological” settlements. Last month, a bilingual Hebrew-Arabic school in Jerusalem was set ablaze. Two of the three suspects, who have confessed to the crime, hail from Beitar Illit, not previously known for its far right wing beliefs.

And even as economic settlers may see themselves as nonpolitical or even left wing - Noa says she’s “centre left, sometimes left” - by moving to the settlements, settlers’ voting patterns may change out of self-interest.

Construction in the Israeli settlement of Ariel. The United Nations considers such settlements illegal, but they have continued to grow in recent years with support from the Israeli government. 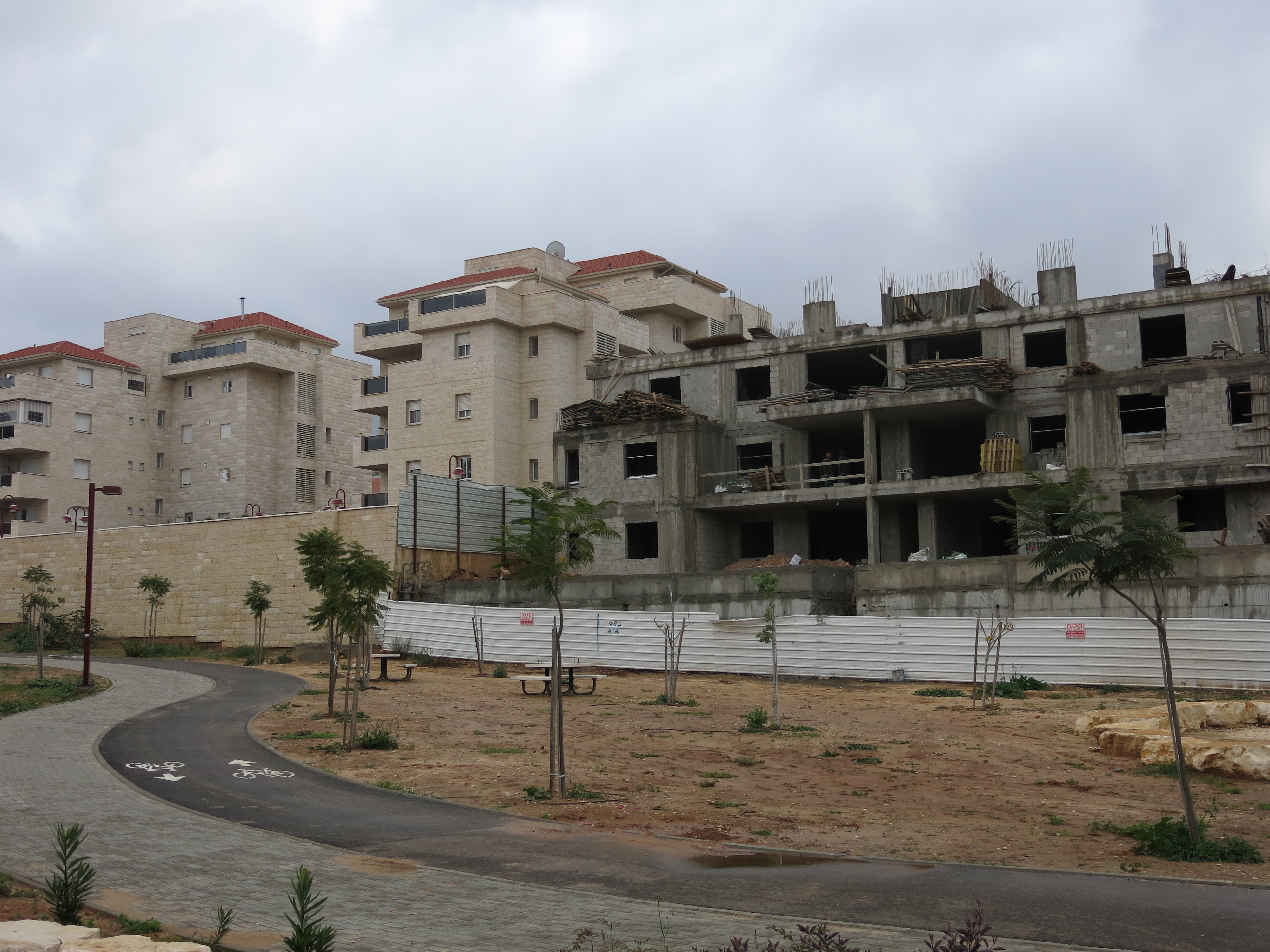 Ultraorthodox settlers are the paradigm of this change - largely poor, in the past 15 years many have moved to areas like Beitar Illit or Modi’in Ilit for cheap housing and a homogenous atmosphere, with plenty of space for their high birth rate. Historically, they were not interested in settlement or Zionist activism.

Neve Gordon, professor of politics and government at Ben-Gurion University and the author of Israel’s Occupation, points out that the parties who represent this sector have shifted its policies. “In the early 1990s the Orthodox parties were in favour of a land compromise - today, much less so, because a large percent of their constituency lives in the occupied territories: space changes consciousness.”

The “quality of life” settler came into public consciousness after the 1993 Oslo agreement between Israeli and Palestinian leaders, when there was serious talk of territory swaps. It has long been assumed that large settlement blocs, either those close to Jerusalem such as Ma’ale Adumim, Beitar Ilit, Modi’in Ilit, or those too big to move, and strategic places like Ariel, would be included in any future two-state solution.

But continuous surveys have suggested that a large percentage of non-ideological settlers would be prepared to leave their homes and move inside the Green Line, for a price.

At the moment though, said Sachs, “there’s a perverse disincentive to leave.” The Israeli public largely sees its government as having bungled the 2005 disengagement from Gaza, with some former settlers who were dragged from their homes on TV complaining about poor compensation and the government’s inability to properly relocate them.

This makes those who might be willing to move from the West Bank, Sachs says, understandably wary. One group founded by a former Shin Bet director, Blue Light Future, advocates a unilateral and voluntary evacuation of settlers by payment.

Amit purchased her house right around the time of the Gaza pullout, and said the possibility of an eventual evacuation “was something that we did think about”. Her area was often mentioned as one that was close enough to Jerusalem to eventually be included in Israel-proper, and that was a selling point.

“If there was some compensation [as part of a peace deal] I don’t see us saying ‘we’re staying under a Palestinian government.’”

But large settlement blocs like Ariel are also unlikely to go anywhere, even in the event of an eventual peace settlement with the Palestinians. In some ways, they are simply too big to move.

To Zimmerman, who has been in Ariel for eight years, the concept of a payoff is irrelevant, as he doesn’t see the Israeli government even attempting an evacuation of Ariel. “That’s going to be handled by the elected government…  they’re going to make the policy on that and the consensus in Israeli politics is that Ariel is part of Israel, period.”

It’s perhaps this certainty that has led to house prices in Ariel shooting up: In the six years up to 2013, prices of new and secondhand homes increased by 104 percent. Other settlements saw increases, including Beitar Ilit (80 percent) largely secular Efrat (77 percent), and Oranit (65 percent). While house prices in Israel proper have still outpaced those in the settlements, rising prices increase the pressure to find new settlements.

Pierpz is enthusiastic about the future of the settler project. “The extremely tight-knit communities (where hitchhiking is a way of life, doors often remain unlocked, young kids are safe on streets unsupervised late at night), are some of the reasons why people want to stay and raise multiple generations here.”

Palestinian officials have said they will take into account the motivations of settlers in negotiating the boundaries of a future Palestinian state. In the end, they see all settlements as encroaching on Palestinian land, whether the settlers have come for the fresh air and cheap accommodation or because of religious fervour.