Hospitals and clinics in areas of fighting in central Iraq are struggling to operate at full capacity due to crossfire, electricity and fuel shortages, and an exodus of staff, officials say.

In addition, health services in Iraq’s northern Kurdistan region, which is hosting hundreds of thousands of people fleeing the fighting between militants and government forces, are struggling to keep up with the needs of the displaced.

In early June, heavy shelling damaged two hospitals in the city of Mosul - one of the most affected by the fighting, according to the World Health Organization (WHO). Militants seized government buildings and the airport and raided the central bank in Mosul, which is suffering from a shortage of electricity and other power supplies. The International Committee of the Red Cross (ICRC) says that although hospitals are still treating injured people, some of them have either stopped functioning completely or are working at reduced capacity.

Several hospitals and clinics in the cities of Tikrit and Fallujah have also been damaged by the fighting, according to aid agencies. On 13 June, shelling badly damaged a Médecins Sans Frontières (MSF) clinic in Tikrit.

Fuel shortages, due to both blocked roads and a militant takeover of the country’s largest oil refinery, Baiji, are affecting staff mobility, restricting delivery of drugs and supplies and limiting the use of ambulances, the UN warned on 26 June.

Electricity shortages, which cannot be plugged by generators due to the lack of fuel, are also restricting clinics to operating on limited schedules, in spite of the growing need for medical support amid escalating violence and injuries, officials have told IRIN.

Fighting between government forces, the Islamic State of Iraq and the Levant (ISIS) and other armed Sunni groups began months ago in western Anbar Province over perceived marginalization of Sunnis by the Shia-led government. In June, the fighting spread to Salaheddin, Nineveh and Kirkuk provinces, causing an estimated 500,000 people to flee in the past fortnight and bringing the total number of displaced to approximately 1.2 million people since the start of the year.

Teams from WHO, the UN Children’s Fund (UNICEF), and other local and international NGOs are delivering emergency kits and other core medical supplies to health centres in the violence-hit areas, but humanitarian access is limited due to the unpredictable security situation.

“The challenge is getting into the most affected areas, as well as the fact that displaced people are scattered all over and that makes it very difficult to allocate services,” said Fabio Forgione, MSF head of mission in Iraq.

“Providing the most basic assistance and medical care is extremely challenging in such an environment where the medical activities themselves are under attack,” he said, adding that in many clinics across central Iraq, drugs were running low and medical staff themselves were leaving for their own safety.

Although there is currently no fighting in the semi-autonomous Kurdish north, health services there are being stretched to the limit by the sudden influx of several hundred thousand people fleeing the fighting.

Many of the arrivals have injuries or chronic illnesses; and the maternity hospital in Erbil, capital of Iraqi Kurdistan, reported this week that its daily Caesarean caseload had risen from 8-10 a day, to more than 20.

At the same time as the surge in patient numbers is denting Kurdistan’s drug stocks, there have been major delays bringing supplies from the capital Baghdad, where all the country’s medicines are centrally procured by the federal government of Iraq.

“We are really worried about the hidden people at risk, the people living in basements and construction sites, the people in parks.”

“There is a critical demand for drugs,” Hussain Syed Jaffar, a medical doctor and WHO representative in Iraq, told IRIN. “There are ample supplies in Baghdad but the issue is getting them up to Kurdistan because the roads are blocked by insurgents.”

The surge in violence across Iraq and the disruption that has been caused to the public health system has been blamed for the re-appearance of polio, which resurfaced in Baghdad earlier this year for the first time in 14 years.

A countrywide vaccination drive was held in April, but monitoring reports show fighting and displacement limited the campaign’s reach in some areas, especially Anbar, which has been out of government control since January. This is likely to continue being a challenge next month when another vaccine round is due to take place.

Health workers are also now on high alert for measles, which is endemic in Mosul. UNICEF has set up vaccination posts at the borders between central Iraq and the semi-autonomous Kurdish region in the north in an effort to contain any potential outbreak.

Ahead of the upcoming polio campaign, UNICEF this week procured and delivered one million doses of oral polio vaccine with 400,000 measles vaccines also on order.

As summer temperatures soar, aid agencies fear disease outbreaks due to a lack of clean water and sanitation for the displaced, especially those staying in Kurdistan’s Duhok Province, where cholera is endemic.

A team of WHO experts from the International Centre for Diarrheal Disease Research, Bangladesh (ICDDR-B) have deployed to Iraq to analyse the likelihood of an outbreak of cholera and other communicable diseases.

MSF has a mobile hospital for emergency cholera treatment based in Duhok’s Domiz Camp (hosting around 60,000 Syrian refugees), which Forgione said could be quickly mobilized if needed. WHO has been supporting cholera prevention training sessions at the request of the Kurdistan Regional Government (KRG).

Three IDP’s from Mosul, who walked four days to the Khazair checkpoint close to Erbil are now staying at a transit camp at the checkpoint. They have no money and nowhere to go. The government and UNHCR and providing them with shelter, hygiene kits and o 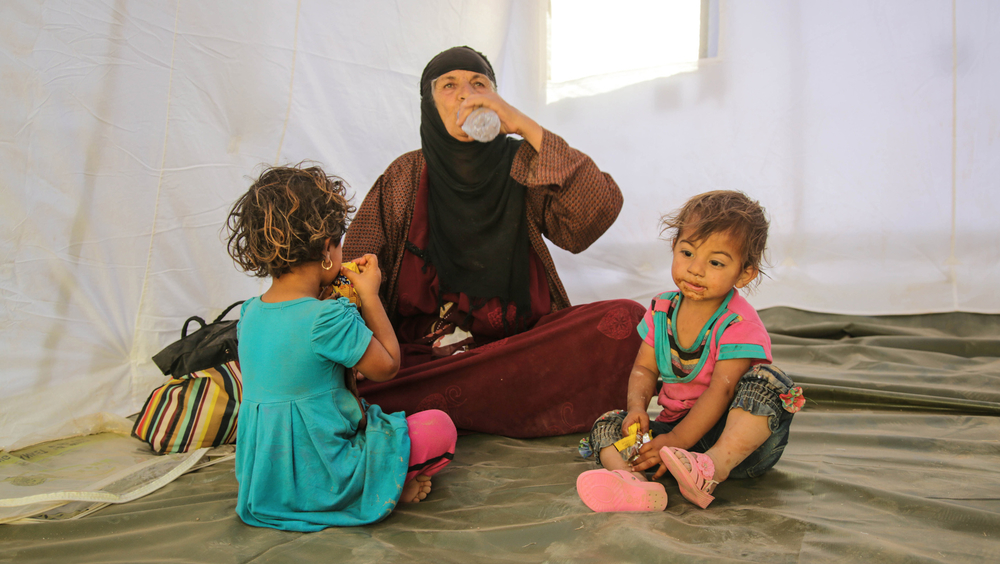 Jaffar, of WHO, warned that although steps were being put in place to manage the situation, additional funds and human capacity were desperately needed.

“The Kurdistan Regional Government (KRG) is already feeling the pressure on its health system from hosting Syrian refugees and now there is this new influx [of IDPs] with more expected and they won’t be able to cope alone,” he said.

"There is not enough human capital available to deliver the services required and we also have health workers themselves displaced due to violence.”

“There is a war happening on our border and a lot of injured people are coming to Erbil for emergency medical services,” explained Raad Najmaddin, focal point for internally displaced persons (IDPs) and head of medical operations and specialized services at KRG’s Department of Health (DOH).

“This is a big new load on our hospitals and we need support both in terms of staff and medicines,” he said, adding that KRG had asked the UN to urgently source paramedics, doctors and medical supplies.

As fighting between ISIS, other Sunni militant groups and the Iraqi Security Forces (ISF) intensifies across the country, the displacement tally is likely to grow, and there are major concerns about how and where the fleeing families will be sheltered.

A handful of camps have been set up close to checkpoints between Kurdistan and the rest of Iraq, and more are planned, but most people have moved into towns and cities. Many are sleeping rough in parks or camping out in collective shelters.

Protection teams from UNICEF as well as other UN agencies and NGOs are combing the towns and cities of Kurdistan in a bid to locate such groups and connect them to health services and other support networks.

“We are really worried about the hidden people at risk, the people living in basements and construction sites, the people in parks,” Colin MacInnes, UNICEF’s deputy representative in Iraq, told IRIN. “We can’t see these people… It’s hard to identify the needs of the most vulnerable people because they are not out there in the open.”

And he added: “Some of them are injured or have chronic health needs and they are not getting access to health care services. Many are traumatized… There are young boys and girls out begging to support their families.”

Tucked away behind Erbil’s colourful main bazaar, in the shadow of the city’s ancient citadel, IRIN found a group of nearly 50 people, who had fled Mosul a week earlier, standing in the slithers of shade of the sun-parched courtyard of a mosque.

Some waved prescriptions saying they needed medicines and one woman in a black robe sobbed as she held up her young child whose face was covered in a red rash.

“Look at my daughter,” the woman, who declined to be named, cried out. “She is sick; we need help.”

Next to her, and clutching her swollen stomach, heavily pregnant mother-of-four Shada Salah also begged for help. “We cannot stay here. People are getting sick from the cat [droppings]. I am worried for my unborn child,” the 30-year-old said tearfully.

Jaffar described the health needs as “enormous” and “growing daily” but he said the biggest challenge was the political uncertainty.

“You can develop effective plans and strategies but these need to be modified on a daily basis because the situation is so fluid and evolving so rapidly,” he said.