Despite six decades of development interventions and nearly a billion dollars in annual foreign assistance, Nepal is still struggling to combat rural poverty. Some experts and local leaders say improving the lives of the rural poor requires patient community-driven initiatives and proper management of the resources communities already have, rather than large-scale strategies.

According to 2010 data from the International Fund for Agriculture Development (IFAD), a specialized agency of the United Nations, there are approximately 8.5 million rural poor in Nepal. In the Human Development Index of the UN Development Programme (UNDP), Nepal is ranked at 157. Two-thirds of citizens rely on agriculture for their economic well-being, and the World Bank notes that the sector contributes 40 percent of the country’s GDP.

Part of the problem is geographical. Reaching rural communities in this landlocked nation of 30 million is difficult because, in a country more than half the size of the United Kingdom, there are few roads and they are often in poor condition. Experts point to a misalignment of development approaches with what the target beneficiaries need as another part of the problem.

“Many of the development interventions we see in Nepal today don’t bridge what we call the ‘last mile gap’, so many services don’t make it to the last village on the path - the one farthest from a road - including basic information about what kinds of improvements are available in the area,” Dhrupad Choudhury, regional programme manager of the International Centre for Integrated Mountain Development (ICIMOD), said in Kathmandu, the capital.

“Rural mountain communities, for example, struggle to benefit from development interventions designed for the rest of the country. It’s important that programmes be tailored to the local specificities, the climate, the inaccessibility, and how these communities experience change,” Choudhury said, pointing to ICIMOD’s 2011 report, Understanding Mountain Poverty in the Hindu Kush-Himalayas.

A shift toward valuing local contributions, stretching engagements over longer periods of time, and recognizing the potential of remittances to contribute to development are needed to affect change.

Poverty is a pervasive problem in rural Nepal 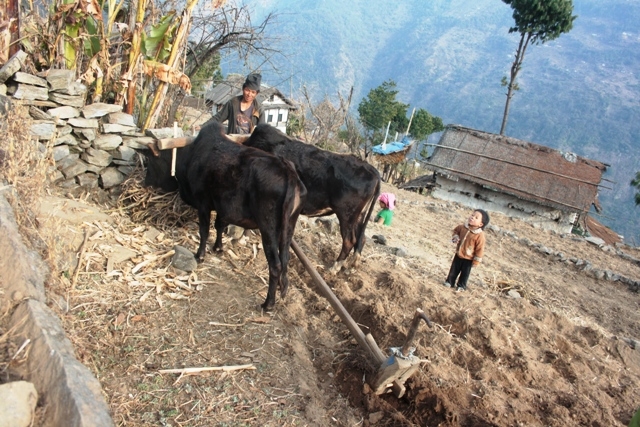 “If a mission-driven organization is committed to a proposal we are funding, then they probably don't mind contributing funds, labour, the use of their equipment, vehicles or office space, etc. to achieve the purpose of the proposal," said Stuti Basnyet, a senior development outreach and communication specialist at the United States Agency for International Development (USAID) in Nepal, which usually asks for a 10 percent "cost share" contribution by communities to projects.

Others say it's more than simply an issue of financing. “Everyone talks about what development can give us, and then we lose sight of what we have right in front of us. We need to be willing to try new things, while thinking about what we are capable of here and now,” Gom Bahadur Kulung, a member of the New Era Development Society, an NGO in Cheskam, Solukhumbu District, told IRIN.

A one-day walk away from Cheskam, Don Bahadur Basnet, who is with the Solukhumbu Development Society, an NGO also operating in the remote village of Sotang, noted that “When you go into a community to work on development issues, even if it’s the village next to where you live, you have to sleep like they sleep, even if that’s on the ground, and eat like they eat, even if the food is not good. Otherwise there is no hope of genuinely engaging with them.”

Basnet, who worked for a decade as a police officer, said he thinks teaching people about development should be less hierarchical. “If a community is digging in the dirt, you should dig with them. If they are building a wall and doing it incorrectly, you can’t just point and say, ‘wrong’, you have to turn the rock around and think through the process with them - how to do it right,” he said.

Ben Ayers, the Nepal country director for the dZi Foundation, a development organization working in the mountainous districts of eastern Nepal, agrees. “It's obvious to us that community members are the true experts on poverty, and they hold the key to overcoming it,” he said. “One of the most important things we can do is start by recognizing, alongside the communities we work with, what's right in front of us. Of course, if development agents only focus upon the faults and deficits of a given community, this will encourage people to leave.”

The importance of slowing down

A typical project cycle in many major development agencies lasts five years, but some experts believe this is too short to expect good results, and can leave communities in the lurch. “Engagement with a community can’t start too fast or too big, or it will be overwhelming and, in some cases, irrelevant to what the community wants,” said Ayers. “It needs to be long-term and based upon what the communities actually need. The best way to do this is to start small and to stick around.”

The dZi Foundation’s policy is that engagements should begin with local volunteer initiatives - often constructing trails or other basic infrastructure designed and determined by the community - followed by small grants capped at US$500. Kathmandu-based experts visit only after that first item has been completed.

“Having only a three- to five-year project window leaves communities vulnerable to the long-term consequences of the mistakes made during this time, which are [often] inevitable,” Ayers said. A school the foundation built in Sotang in 2008 was damaged in a 2011 earthquake and now needs to be completely re-built. “Our engagement cycle lasts nine years, so we’re still involved in communities long after individual projects are complete. We have a moral commitment to help re-build the school that wasn’t engineered properly the first time around.”

A field outside the town of Jumla. Once prosperous, these days the Karnali is considered as the poorest and most food insecure region in Nepal 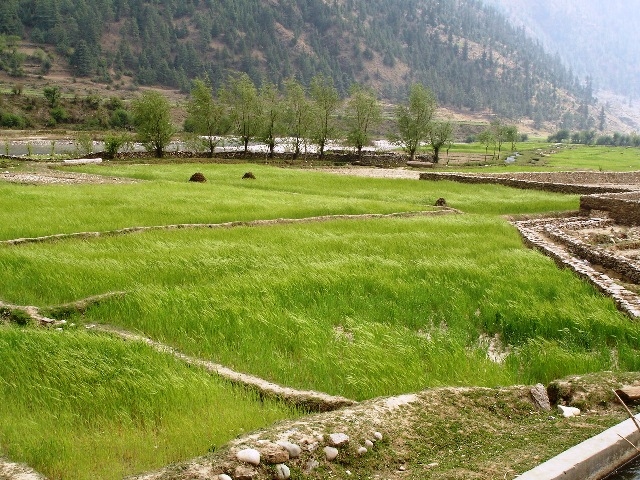 ICIMOD's Choudhury pointed out that “A realistic and sensitive exit strategy has to be part of any development intervention during the design process. Ultimately, development actors have to remember that it’s not how you yourself are performing, it’s about the change that outlives the project cycle of an individual intervention.”

Ayers noted that project design and implementation should be seen as an opportunity to constantly improve interventions as they happen. “The root of all development is learning. We take great efforts to ensure that our monitoring and evaluation is first and foremost a learning tool for community. This allows us to understand how our strategies actually perform, and also for community members to hold us accountable for our mistakes.”

A 2011 Swiss Agency for Development and Cooperation report, Everyone is Leaving – who will sow our fields? based on research in Khotang District, which borders Solukhumbu to the east, found that migration from the area was bringing in remittance money of approximately US$135 per year per capita - on par with national averages - but it was also having some negative impacts on local communities, and not contributing to development.

“Labour expended in the Gulf [countries] or Malaysia is labour lost to Nepal and the development of its own economy,” the report said. Researchers found that remittance money was often used to repay loans that had financed the migration of a family member or other purchases, and the departure of men was causing a shortage of agricultural labour in Nepal, imperilling farm outputs.

“Remittances don’t necessarily make it back to the place where people started from, to the villages,” Choudhury said. “The money might get put in bank accounts in Kathmandu. Communities need to figure out a way to make sure the money comes back and contributes to local development,” he said.

“There’s a lot of focus on financial remittances, but that overlooks what the flows mean more broadly - skills and knowledge come back from abroad as well,” Choudhury noted. “As people come and go from communities, earning money and gaining knowledge and connections, that [also] needs to start benefiting the rural poor communities that stay put.”