On 5 January, as the country voted in parliamentary elections, armed men attacked Shyamal Kumar Biswas, 35, and other residents in Malopara, a fishing village of 80 families in Jessore district, southwestern Bangladesh. All the villagers are Hindus, and most fled to other nearby villages as attackers burnt their shops and homes.

The main opposition party, the Bangladesh Nationalist Party (BNP) and an allied Islamist political party, Jamaat-e-Islami (JI), boycotted the 5 January poll in protest of parliamentary elections being run by the ruling party rather than a neutral caretaker government, in conformance with historical precedent.

Local media cited a poll monitoring group, Brotee, as saying that 180 people had been killed in poll-related confrontations since the disputed poll was announced on 25 November 2013.

Hindus were also the target of attacks during elections in 2001 and 2008.

The beginning of 2014 saw continuing violence and Human Rights Watch (HRW) said Bangladesh had “tumbled backward on human rights”. In its recent report, HRW said a harsh crackdown on the media, various civil society organizations, and political opposition groups, all of which had been protesting the recent election, as well as an ongoing war crimes tribunal, had led to violent street protests in 2013, killing almost 200 people and injuring thousands more across the country.

While most of those attacked were Hindu, other groups outside the Muslim Bengali majority were not spared either, such as indigenous Garo families in the district of Jamalpur. Some 27 different ethnic groups are registered and make up about 1 percent of the country’s population, though some indigenous groups calculate there are as many as 45.

While political parties trade accusations, no group has claimed responsibility for the violence.

After 10 days in hospital receiving treatment for injuries to his head and a leg, Biswas returned home, still in pain and still fearful. Bangladesh’s Prime Minister, Sheikh Hasina, visited his village, 275km from Dhaka, the capital, on 23 January. Security measures, including passenger checks on public buses, remain in place in the village as well as in adjacent areas to thwart possible criminality.

Biswas was not reassured. “These security forces will not remain for long, and who will save us in the future?” he asked. Gopal Chondra Ghosh, another resident, told IRIN that “Everyone in this village fears the village will be attacked again.”

Political turmoil and an underlying long-standing tension between Muslims and Hindus are not new in Bangladesh. In recent political crises, Hindus have often been among the first affected by election violence.

“Attackers find the political crisis the best time [to lash out at Hindus], as people [are focused] on the crisis,” Rana Dasgupta, the general secretary of the Bangladesh Hindu Buddhist Christian Unity Council, told IRIN. “And no one takes the responsibility. Every one transfers their responsibility to anyone else,” he said.

A Hindu fisherman, Shyamal Kumar Biswas, after being attacked by armed gangs in Bangladesh's southwestern district of Jessore 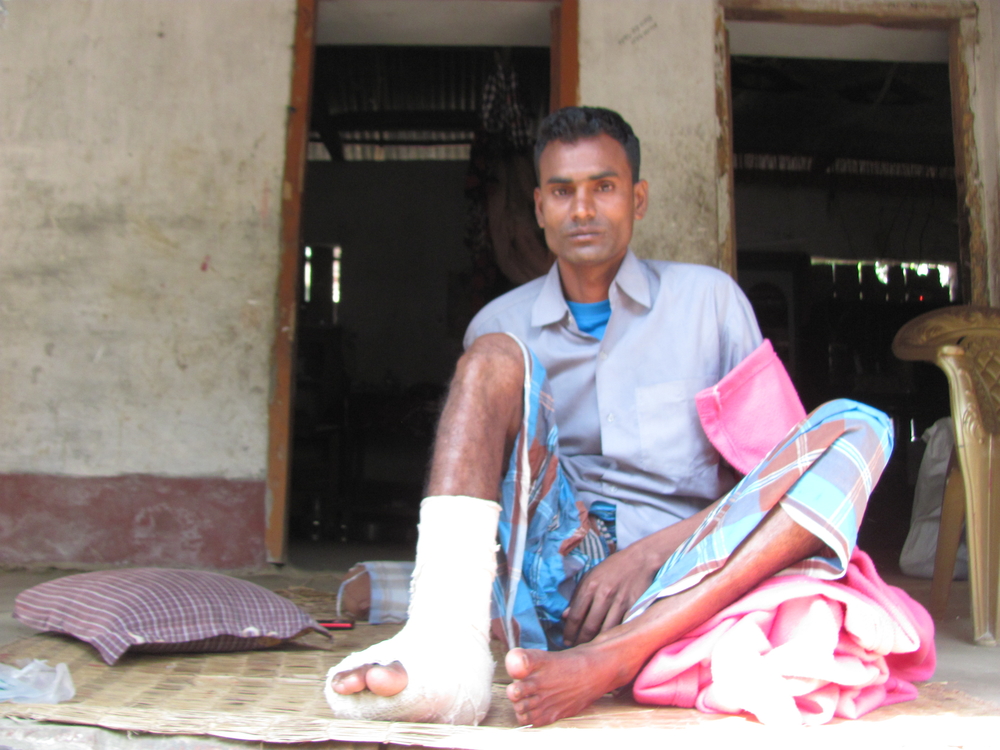 According to the latest census, in 2011, Hindus made up 9 percent of the population of 152 million. Some 10 percent of people were classified as belonging to a minority group, based on religious affiliation, and ethnic and linguistic identity.

A local BNP leader in Malopara village, Sirajul Islam Mannu, told IRIN his party was not behind the attacks on Hindus and other minorities, and blamed the ruling Awami League party, which has denied responsibility.

Hindus usually vote for the ruling Awami League due to its secular politics, but it is not clear whether Islamist politics was behind the violence, or whether bandits were taking advantage of political instability to seize land and other assets from vulnerable groups.

“Though communal forces carry out attacks, we saw that all parties are united when it comes to looting Hindu houses,” Dasgupta alleged. He believes fundamentalist Islamic groups are trying to chase Hindus out of the predominantly Muslim country, and take advantage of civil disturbances to pursue this agenda.

While political instability may facilitate periodic spates of violence targeting Hindus, this does not explain or justify such actions.

“One of the major reasons for the attacks is occupying land and assets. If repeated attacks take place, Hindus will migrate and this will help local [lawbreakers] to occupy the lands,” Dasgupta claimed.

Shafiqur Rahman, the acting secretary general of JI, has called on the ruling Awami League party to set up an independent commission of inquiry under UN supervision. An independent judicial commission was formed in December 2009 to investigate the 2001 post-election violence, but its recommendations have not yet been implemented.

“It is not always easy to understand the rationale behind criminal activities, however, considering the pattern and history of attacks, it seems that impunity may be contributing to [the violence]” Gerson Brandao, a humanitarian affairs advisor in the Office of the UN Resident Coordinator, wrote in an email to IRIN.

No perpetrators of recent alleged attacks have been charged or brought to trial. Activists are calling for special legislation to prevent and prosecute attacks on minority groups, specifically Hindus.

Although the Bangladesh constitution gives every citizen equal treatment before the law and its protection under Article 27, and the country is also party to the International Covenant on Civil and Political Rights,which ensures freedom of religion, violent assaults on religious minority communities are often not investigated or prosecuted.

“The history of Bangladesh is inextricably linked to tolerance, so it’s surely [in] the interest of the state to protect this fundamental value, and identifying and charging those responsible for the attacks should be a priority,” Brandao said.

Mustaq Ahmed, senior secretary of the Ministry of Home Affairs, told IRIN that the ministry had given strict instructions to local police stations to identify attackers and pursue charges. “The security forces are working to identify and arrest the perpetrators,” he said.