Read about what we achieved.
KAMPALA

Uganda’s latest plan to improve food security in the mainly arid Karamoja region - make everyone cultivate a garden - has been described as short-sighted and patronizing.

“Why must it be cassava and potatoes and not one cow or goat?” wondered Chriz O'gwang, a resident of the Karamoja town of Moroto, in a lively Facebook discussion of the obligatory garden initiative.

“But why is everyone forcing us (Cattle keepers) into agriculture? Agriculture is just a side dish to pastoralism,” echoed another member of the Karamoja Development Forum group, Angella Godfrey.

Although experts have been making this point for years, the government’s policies in Karamoja remain rooted, according to many who work on development there, in the misconception that cattle-raising is unsustainable and that growing crops there is a viable way to avert hunger and reduce poverty.

Starting this year, all households in Karamoja, which is home to around 1.2 million people, will have to grow cassava and potatoes “to improve food production and ensure that people have food to eat even during the dry season”, State Minister for Karamoja Affairs Barbara Nekesa told IRIN.

“Food insecurity has been responsible for the low development in the region. You can’t develop a place where there is no survival. To ensure this region develops, we must address the food insecurity first,” she added.

“It’s a very good move by government, and I strongly support it as a leader,” Margaret Aleper, a member of parliament in Karamoja, told IRIN.

“The cassava and potatoes can thrive very well in Karamoja with low, normal and abnormal rains [wet and dry seasons]. Everybody must support this idea, as it will go a long way to solve the food insecurity in Karamoja,” she said.

According to the Famine Early Warning Systems Network, 2013’s main harvest in Karamoja was expected to be 30 to 50 percent lower than average because of poor rains. “Humanitarian assistance needs are likely to increase to nearly half a million people by February.” 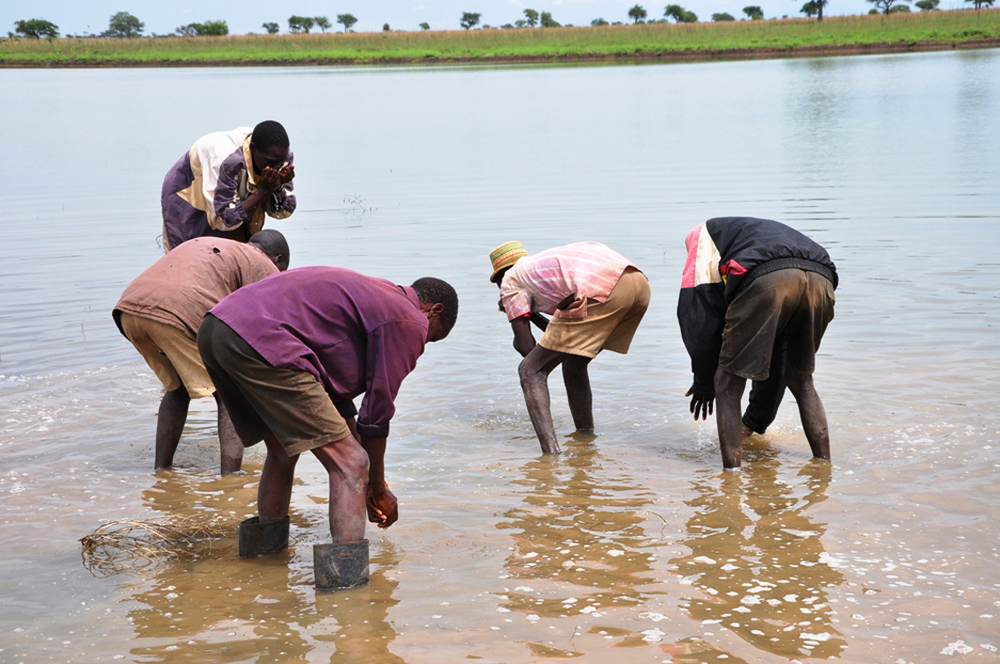 The World Food Programme said it planned to give food assistance to 155,000 people starting in February, sooner than usual because of the earlier onset of the annual lean season.

But the agency said an acute lack of funds could affect this plan as well as regular Karamoja programmes such as a food-for-work scheme with 390,000 beneficiaries, school feeding for 100,000 children, health and nutrition programmes for 38,000 mothers and young children, and supplementary feeding for 25,000 malnourished children.

In the initial stage of its support for the garden project, the government will provide some 4,000 oxen, 2,000 ploughs and 14,000 hoes to households across Karamoja’s seven districts.
Dozens of dams and numerous boreholes and irrigation systems are being planned.

“The government, through my office, will increase investment in this area and will require all the development partners to support this initiative,” said Nekesa.

Some partners have yet to be persuaded of this latest initiative’s viability.

The Food and Agriculture Organization “believes that the production of agricultural crops alone would not be enough to make a difference in the food insecurity situation in Karamoja”, said the UN agency’s representative in Uganda, Alhaji M. Jallow.

The plan should only be implemented “in areas suitable for these crops, according to the agro-ecological zones,” he added.

“Food insecurity and malnutrition are best addressed with a holistic approach, tackling the key drivers, which are food production, water and sanitation, social protection, and gender equality.” 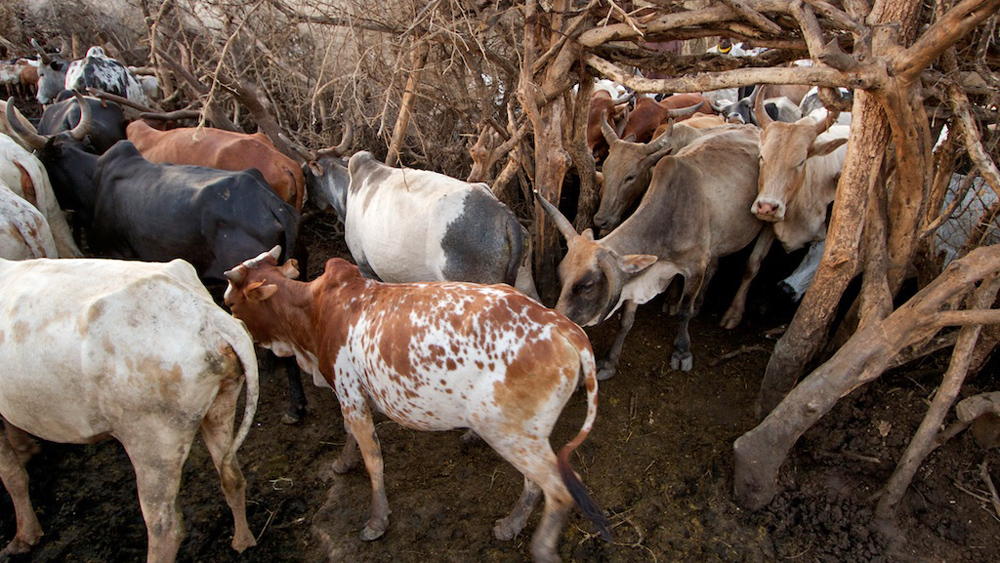 For Darlington Akabwai, a Ugandan veterinary doctor and researcher who has spent four decades working in pastoralist regions such as Karamoja, the gardens scheme is yet another example of “ill-informed” government policy that “blames the cow as the source of the problem instead of being the solution.”

“There is no benefit whatsoever in concentrating all the donor aid and government financial assistance in the garden, which is vulnerable to uncertain ecological changes, instead of making a deliberate effort to focus on the cow. The Karamong have learnt from time immemorial to balance the garden and the cow. The new developers have decided to focus on the garden alone while leaving out the most resilient survival tool and that is the cow. Why not at least balance the two?”

Akabwai explained that the cultivation of “green belt” parts of Karamoja, traditionally used as dry season grazing reserves, had reduced free movement of livestock, drastically undermining the economic viability of pastoralism. As a result many people now cut trees for firewood and building material to sell in order to buy food.

“This livelihood survival strategy is now widespread… The environmental damage this coping strategy has caused and is still causing is very massive,” he added.

Akabwai also sounded an alarm on the issue of water distribution: “Has corruption evaporated in this regime? There was talk of [a senior official] who disappeared with millions meant for building dams in Karamoja. And we can still hear of talk of dams, and these have turned out to be money mining ores! Unless these [practices] can be changed, we are talking of more than chronic food insecurity in Karamoja.”

Another expert on development policy, who asked not be named for fear of souring relations with the Ugandan government, described the garden initiative as “poorly conceived… patronizing, condescending and against any number of international standards of free choice, free markets, basic democratic standards and human rights.”

Patricia Nangiro  wrote in the Facebook forum, “As usual it’s a top-down approach to community problems. Like many other initiatives, the beneficiaries are never part of the planning process, but they will be expected to embrace the implementation wholeheartedly. The policy committee [national and local officials who approved the plan] will have to say okay because they need their jobs, not that they care so much for the welfare of ordinary people.”

Elizabeth Stites, research director of the Feinstein International Center at Tufts University, explained that “traditionally and historically, many people in Karamoja have engaged in opportunistic cultivation… when conditions are right for planting, people plant. They do not need to be told they must do so by outsiders or policymakers”.

“Enforcing a livelihoods change will only take human and physical capital (labour, tools, funds, time, etc.) away from the more sustainable and appropriate livelihood strategies that households engage in,” she said in an email.

“Any intervention that assumes climate reliability [to supply rain for the gardens] in Karamoja is ill-informed and destined to fail, while also increasing vulnerability to food insecurity. Karamoja is characterized by erratic and variable climatic conditions, and always has been; the unreliability of such conditions is only becoming more pronounced due to climate change,” she added.

Firewood harvesting in Kotido, in the Karamoja region, Uganda 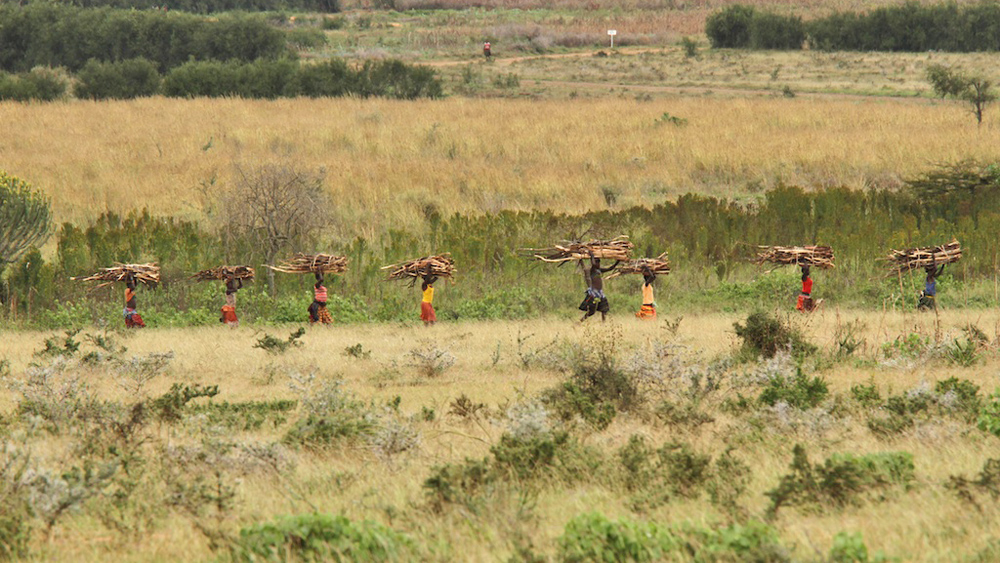 Sites also expressed scepticism that the “huge” infrastructural demands of the plan could be realized, “given that there is no history of successful government-led investment and follow-through of such projects.”

“All of these water irrigation strategies take intense management to keep them operational,” echoed Thomas Cole, a seasoned food security and agriculture advisor, speaking to IRIN by phone from Moroto. “Sometimes the dams get silted up. Things get broken. Boreholes have problems with spare parts.”

Cole also suggested the plan reflected a narrow view of food security. “One of the keys is understanding that in a pastoralist environment food security has come through animals, primarily milk. What we have seen because of insecurity and protective kralls [where government troops guard pen livestock] is that most women and children have not had access to milk to very long time.”

Or, as the Facebook group’s Vicky Lodia put it, “We would love be both milk secure and food secure.”

Khristopher Carlson, a researcher with extensive field experience in Karamoja, said “another concern is the distribution of ploughs, hoes and oxen. What happens when the rain goes dry? People sell off their assets, and these are the first to go, with the oxen being the last of the list. Then what happens? The government redistributes these tools?”