Chaos following a coup in the Central African Republic (CAR) has left half the population of 4.6 million in need of assstance, some 415,000 people displaced and countless living in fear of increasingly brutal and sectarian violence.

A mainly Muslim band of a few thousand rebels, foreign mercenaries and common criminals calling themselves ‘Seleka’, meaning “alliance”, seized the presidency, leading to the installation of the country's first Muslim leader, Michel Djotodia, in March.

Though they have since been officially disbanded, the group remains active. Their ranks have swelled to 25,000, and they have been accused of a litany of abuses, including torture, rape, murder and the recruitment of thousands of child soldiers.

Aid agencies have also come under fire. In September, two aid workers from ACTED were accused of being spies after Seleka fighters discovered their satellite phones in the northern town of Bossangoa. They were reportedly tortured to death. In the capital, Bangui, aid workers’ cars have been seized at gunpoint.

One aid worker, who asked for anonymity because he was not authorized to speak publicly, said that trying to work around the ex-Seleka was a game of Russian roulette.

“They have no respect for life. They just destroy,” he said.

Their newest recruits - some 6,000 children - are reportedly drugged up before being unleashed to commit atrocities, he said. “We have a lot of kids here on narcotics. They just shoot, kill without feeling.”

The attacks have prompted the emergence of self-defence groups calling themselves ‘anti-balaka’, or “anti-machete”. Drawn from the country’s Christian majority, they have also been accused of targeting unarmed Muslim civilians as well as former rebels. They are sometimes joined by ex-military loyal to the former president, Francois Bozizé.

On 6 December, speaking after around 100 people were killed within the previous 24 hours, Valerie Amos, the UN’s Emergency Relief Coordinator, called on “all those involved in the violence to protect civilians and ensure their safety, and to respect their obligations under international humanitarian and human rights law. They must allow free and unfettered access for neutral and impartial organizations to safely deliver humanitarian aid.”

Medecins Sans Frontieres (MSF) and the International Committee of the Red Cross are now the only aid groups venturing out onto highways, which are plagued by armed groups that increasingly question the neutrality of  humanitarian organizations.

Children wait for water at a school where Muslims have sought shelter from increasingly brutal sectarian violence that has pitted largely Christian self-defence groups against Muslim rebels turned state forces and the wider community by association. 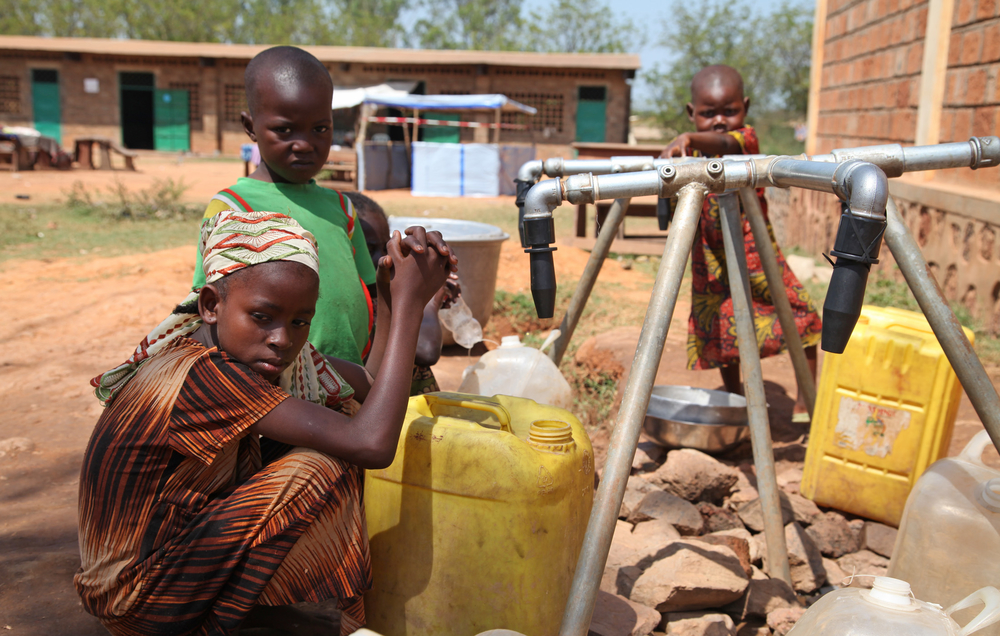 MSF is running a clinic at Bossangoa hospital, and recently set up 10 health points at the two camps for displaced people because, despite alarming rates of sickness, many were too scared to walk the 200m along the highway to seek help.

“In the first 14 days, we've seen over 4,000 kids under five, and a few adults, and we treated 3,200 for malaria,” Heather Thomson, medical coordinator for MSF Belgium, told IRIN.

MSF says that malaria is the biggest killer of the crisis, silently claiming the lives of thousands hiding in the bush, often without any provisions. Around the northwestern town of Boguila, staff treated almost 95,000 people for malaria between January and October, but cannot reach the majority now in hiding.

“The humanitarian crisis affecting those living in the bush is particularly severe when it comes to malaria. Ex-Seleka fighters looted many of the hospitals and pharmacies throughout the north, in many cases as recently as September, leaving entire communities without a single dose of medicine,” said Peter Bouckaert, emergency specialist for Human Rights Watch (HRW).

While malaria deaths are “the most visible” among the displaced, “the complete looting of most rural clinics and pharmacies by ex-Seleka has also brought treatment for HIV/AIDS to a standstill,” he said.

“With an HIV/AIDS prevalence rate of 13.5 percent among adults, the complete disruption of ARV [anti-retroviral] programmes in CAR will soon start adding to the death toll already caused by malaria.”

He told IRIN about Placide Yamini, a clinic nurse in the market town of Ndjo, whose sister died of malaria just 48 hours before HRW visited. Yamini was quoted saying the people could only “live and die here like animals.”

“The effectiveness of a nurse depends on access to medications…We used to take care of those who have AIDS, but after the destruction of the clinic by ex-Seleka in September, we cannot do anything for them. So many people are suffering. Now, no one is taking their medications,” Yamini told HRW.

“ Insecurity continues to restrain the scale and scope of humanitarian interventions across the country. We have to analyse the security situation on a daily basis ”

A September report released after a meeting with top humanitarian chiefs from the UN and European Union said that CAR's “entire population of 4.6 million is affected by the ongoing complex emergency, and needs have increased significantly.”

On Thursday, the UN's Food and Agriculture Organization reported that “in Central African Republic, 1.3 million people are in need of emergency food assistance due to civil unrest,” up from 1.1 million a month ago.

But reaching the many people in need has posed serious security, logistical and financial challenges to the aid agencies working in the CAR - many of which are based in Bangui, while the worst-hit areas are in the provinces.

Amy Martin, head of the UN Office for the Coordination of Humanitarian Affairs (OCHA) in CAR, told IRIN that the country's newest de facto authorities have not placed any restrictions on where NGOs can go. But UN agencies have self-imposed limits due to the lawlessness and “armed groups that have no knowledge of and no respect for humanitarian aid workers and the humanitarian principles in which we operate, including  providing assistance to everybody who's affected by a crisis,” she said.

“So it's a struggle for us to be able to carry out our mandates and provide assistance in an environment where we are perceived to be assisting people, irrespective of their religion, their ethnicity, their religious affiliation.”

“Insecurity continues to restrain the scale and scope of humanitarian interventions across the country. We have to analyse the security situation on a daily basis,” he said.

“This, combined with the absence of the rule of law and attacks against humanitarian personnel and assets, prevents lifesaving assistance from reaching people in need. Basic social services, such as healthcare, education, water and sanitation - the delivery of which is largely dependent on humanitarian agencies - have been severely compromised as a result.”

HRW’s Bouckaert told IRIN that charities faced “constant threats to their security and an overwhelming level of needs from the displaced population,” meaning that “the humanitarian response today is limited almost exclusively to provincial capitals and similarly large towns,” while the majority of people are cut off in outlying areas.

He says HRW research missions last month “were literally the first humanitarian persons to reach some of these populations” after “challenging” logistics and negotiations with ex-Seleka and anti-balaka, which had blocked roads and taken down bridges.

“The level of suffering we found was absolutely horrific - almost all the families we found had lost family members to malaria and disease very recently.”

With much of the violence taking place in the country's northern breadbasket regions, malnutrition is expected to skyrocket as the lean season starts. 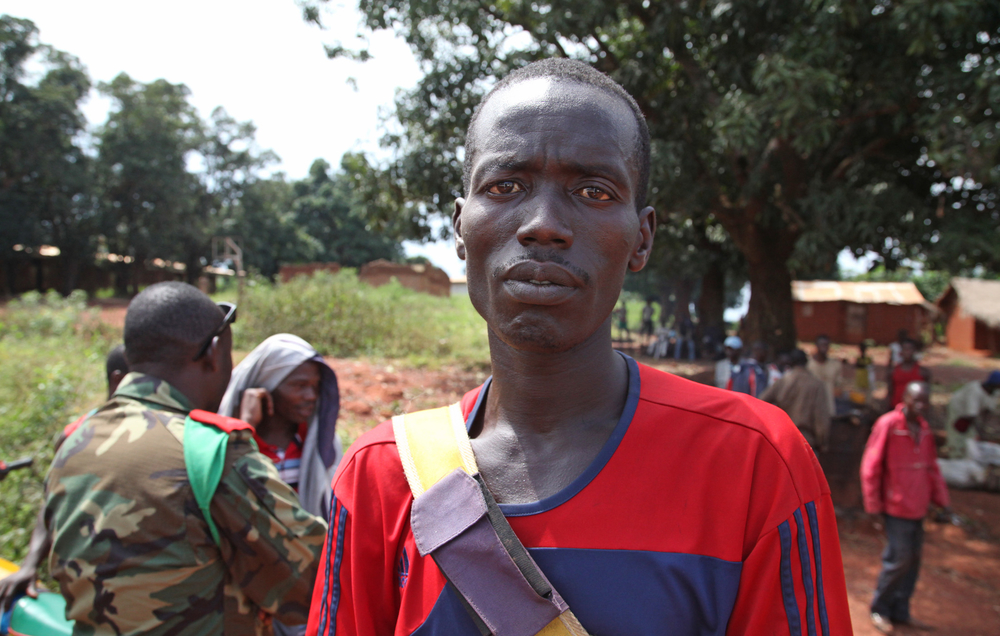 Housainou Taal, the World Food Programme’s (WFP) representative in CAR, has called “upon the different armed groups to respect the rights of civilians and to provide humanitarian access for our staff to reach those in dire need.”

IMC, which works in the eastern provinces, recently discovered that in some parts of Haute-Kotto Prefecture, there is “a malnutrition rate as high as 15.8 percent, which is classified as ‘critical’ by the World Health Organization.”

“Furthermore, the crisis impacted on the treatment of malnourished children as insecurity hindered the access of humanitarian organizations and the transportation of vital food supplies,” said IMC's communications officer Laura Jepson.

Areas with no health posts were reliant on Bria Hospital, some 40km away, with two IMC mobile health units left trying to cover 11 communities, or some 18,000 people.

WFP has so far helped 250,000 people since January, but is facing a $20 million shortfall.

“Even before the recent political upheaval, healthcare services fell far below the needs of the population. The latest crisis worsens this already dire situation as health facilities are looted and vandalized; interruption to supply chains leads to a lack of health supplies and essential medicines; and insecurity prevents health care staff and patients from reaching health facilities,” says IMC’s Mulamba.

President Djotodia recently admitted to Al Jazeera that he could not control the ex-Seleka fighters. On 5 December, he extended a curfew for Bangui residents by four hours, following a night of clashes in which scores were shot or hacked to death with machetes; the curfew now lasts from 6pm to 6am. Most aid agencies already observe a curfew starting from as early as 5.30pm.

But Djotodia has brushed off warnings that violence in the country could turn into genocide, claiming that the tens of thousands of people taking refuge the Bossangoa Catholic mission were only there for the free food and water.

“ Any [local] man travelling from these war-affected areas through ex-Seleka checkpoints is considered anti-balaka, and faces, at best detention, and, at worst, immediate execution ”

Meanwhile, people are fleeing mounting violence, with razed and looted homes dotting the 150km road from Bossangoa to Bangui. “The needs of conflict-affected people continue to increase, particularly for those hiding in the bush who have inadequate access to shelter, food and water, and are exposed to malaria and further attacks from armed groups,” said Mulamba.

But Bouckaert says the “current humanitarian approach is not reaching the hundreds of thousands of people hiding in terror in the bush next to their villages - this is a serious flaw that needs to be urgently addressed.

“The people living in the bush want to remain close to their fields, where they have food in the ground, and we cannot expect all of them to pick up their meagre belongings and take the dangerous journey to larger towns. We need to reach them with vitally important humanitarian supplies, especially medicine,” as some local medical staff had stayed with their people but needed supplies that only international aid workers can deliver, he said.

“Any [local] man travelling from these war-affected areas through ex-Seleka checkpoints is considered anti-balaka, and faces, at best detention, and, at worst, immediate execution,” he says.