Back-to-back emergencies during the last three months in the Philippines
have exposed the need for more psychosocial support (clinical and social assistance to ease mental suffering) for local
aid workers who are often the first responders – even when they have
also been seriously affected – but are among the last to get help.

“What
interests me most is that there is always sufficient money available to
pay… [for] psychosocial support services of internationally hired
staff, but hardly ever enough to consistently provide similar services
to locally hired staff,” said John Fawcett, who has worked on NGO staff
wellness for the past 20 years, including directing staff support
services at the global NGOs, Save the Children and World Vision.

In
the Philippines, the Moro National Liberation Front (MNLF) laid siege
to the port city of Zamboanga on the southern island of Mindanao on 9
September 2013 to protest on-going peace talks between the government
and a breakaway rebel faction. Two weeks of fighting followed,
displacing more than 100,000 people.

On 15 October a
7.2-magnitude earthquake hit the central island of Bohol, displacing about 150,000 people,
about half of whom are still unable to return home.

Ronnel Villas, a local humanitarian coordinator for the UN
Population Fund (UNFPA), was still on a medical mission in Zamboanga
when Typhoon Haiyan struck his hometown of Tacloban in the central
Philippines on 8 November 2013. Communication lines were cut, commercial
flights were suspended and he could not reach his family. To date, an
estimated 207,000 people out of Tacloban’s 221,000 population (2010
estimate) remain displaced.

“The hardest part was the three days
of not knowing the whereabouts of my family,” said Villas. When he
finally found a way to get to Tacloban, he was shocked by the
devastation. All 138 of the city’s subdivisions (locally called
‘barangays’) were affected.

Typhoon Haiyan (local name Yolanda)
made landfall a total of six times in central and western Philippines
with winds of up to 315km per hour pummelling residents and buildings
with gusts as strong as 380km per hour, according to the government.

“We are used to getting storms in this part of the country,
but never had I seen devastation like this. I also had a duty to
respond to this crisis. Once I had secured my family, I knew I had to
help rebuild my community, too,” said Villas.

“In the first 24 to
48 hours of a disaster, the community bears the burden of response. It
is a fallacy to rely on external help,” the World Health Organization’s
(WHO) Southeast Asia adviser for emergency and humanitarian action,
Roderico Ofrin, told IRIN in 2010.

Community responders are even
more important today as the number and intensity of disasters
multiplies, said Gwen Pang, secretary-general of the Philippine Red
Cross, which trains local emergency responder volunteers.

In 2012 the UN Office for Disaster Risk Reduction (UNISDR)
ranked the Philippines as the 12th country globally most prone to
tropical cyclone, flood, earthquake and landslide risk.

“First
responders are effective. They know the community, the needs and
available resources,” Pang told IRIN. “But as first responders, who are
also survivors, they also need psychosocial support for them to cope
better.”

First to respond, last to get help?

Yet local
relief workers are often among the last to receive such support because
of their perceived equanimity, said Jorge Sierralta, a clinical
psychologist with the UN Office for the Coordination of Humanitarian
Affairs (OCHA).

“They are composed. Their adrenaline-fuelled
productivity and heightened sense of purpose because this is their own
community [they are helping], gives the appearance they are coping
well,” said Sierralta, who is in the Philippines to assess the
psychological health of OCHA staff and advise other UN agency managers
about staff welfare. 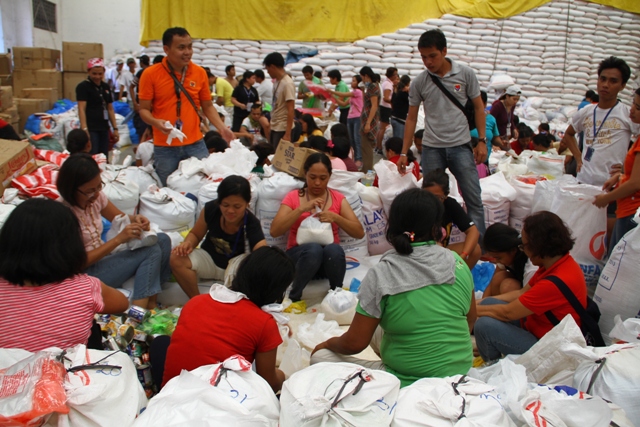 Even if offered grief counselling, some will decline, due to local stigma against any perception of mental weakness, he added.

Or
perhaps they sometimes do so simply out of overwhelming gratitude for
having survived, as was the case with Jamilla Arasid, a government
social worker who processed displaced persons in Zamboanga, where her
home was burnt down on the second day of the siege.

“We couldn't
save anything – I had no vehicle to haul things. I tried to hire [public
transportation]. I even said, ‘name your price’ but none of them dared
to help us. Yes, it is sad, especially when I think that everything that
we saved up for [over] so many years is now gone. But then I'd think of
others who are displaced, [how] they had no work during the siege and
even after. At least I still had a job, and all throughout the siege I
was still receiving a salary for doing my job. I am still thankful to
God that we survived.”

Financial stress was the top worry
reported by surveyed local aid workers, according to the 2012 edition of
Stress management guidelines for humanitarian workers by the Stockholm-based Antares Foundation, in collaboration with the
US Centres for Disease Control.

“Following or during a disaster
the ability to earn wages are negligible,” said Fawcett, previously with
OCHA, but now an independent consultant based in New Zealand. “No one
who gains employment in such circumstances is going to compromise that
by demanding more than they already receive.”

Expatriate workers
most often reported restrictions on movement due to security concerns,
housing problems, conflicts with fellow staff members, lack of direction
from management, and an excessive workload.

Most workers in Sri Lanka reported
having lost property or needing to flee suddenly during the civil war,
and over one-third also reported having to live in a camp for displaced
persons, going without food and water, or experiencing the loss of a
family member or friend due to violence.

Duty of care – for some?

International
staff are more likely to seek and receive mental health support, said
Fawcett, explaining how their home countries most likely honour “duty of
care”, a part of common law, or even an explicit legal obligation, in
most developed countries, in which there is an implicit responsibility
by an individual to not harm others, which includes preventing
psychological injury.

“International staff of both for-profit and
non-profit organizations have been successful in courts and in actions
against employers for lack of duty of care. It has been, to my mind,
amazing that such cases have not been pursued in courts on behalf of
locally hired staff,” said Fawcett.

There have been a number of
notable efforts to improve mental health support to local aid workers.
Sierralta said the UN has doubled the number of staff counsellors in the
past seven years. Fawcett commended the Staff Care Centre recently set
up by the US Agency for International Development’s (USAID), which aims to provide comprehensive
support services to all USAID personnel worldwide.

But such
initiatives are too few and too poorly funded, or simply result in some
one-off workshops with no institutional change. Fawcett suggested that
one way to cement such efforts would be for USAID to require its funding
applicants to ensure staff welfare programming, which “has the
potential to change the way such services are delivered”, given USAID’s
prominence in humanitarian funding.

Without donor pressure
little would change, as was the case in Haiti, where Fawcett said there
was an “egregious” lack of concern for aid workers from
disaster-affected communities.

“Despite the hundred so millions
of dollars pouring into the agencies, it was virtually impossible to
find a few tens of thousands [of dollars] to support local staff,” he
wrote to IRIN in an email. “There was not one staff [member] hired
locally who had not experienced calamitous loss… In western contexts
these people would have been sent home and advised to seek help.”

More
resources are needed to address the psychosocial needs of local
humanitarian workers, whose need for support is equal, if not greater
than, that of international staff, said Sierralta. “They can hear the
stories in their own language. They can sense things we [international
aid workers] cannot sense.”

Jeoffard Montejo Jr
was part of a team of Philippine government nurses who attended to
emergency maternal healthcare needs following Typhoon Bopha (local name
Pablo) in the southern Philippines in 2012, which ranked as the country’s deadliest in two decades (with an
estimated 1,900 dead or missing) until Typhoon Haiyan hit.

Zamboanga, Philippines - Black smoke from burning houses rises in the background as a military cargo plane bearing relief goods arrives in the besieged city of Zamboanga in Mindanao, where troops are locked in a battle with Muslim rebels opposed to peace 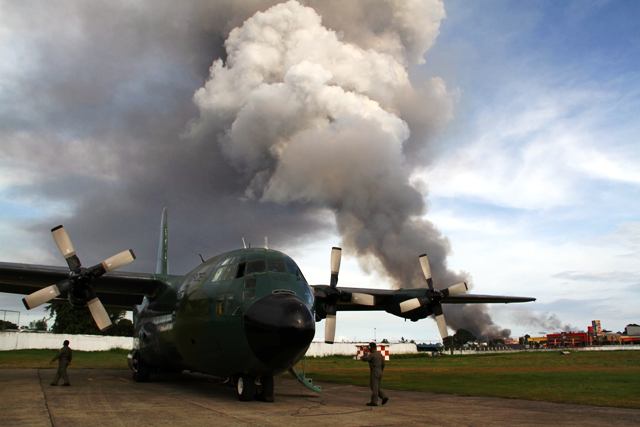 He was
recently deployed to central Philippines for Typhoon Haiyan relief
efforts. “We need stress de-briefings, too. It would be ironic if we
health workers could not provide healthcare,” said Montejo.

Some
five years ago a prominent UK-based Cochrane Review meta-study said “no evidence has been found” that post-trauma briefings (also
called critical incident stress debriefings, or CISD) were effective,
and they could actually cause harm.

But other researchers have
defended the practice of CISD for emergency workers, which is the original
purpose for which these debriefings were first employed.

The
Antares Foundation calls for “practical, emotional and
culturally-appropriate support for staff at the end of an assignment or
contract”.

Sierralta said some of the recommendations being
implemented in the Philippines to ease workers’ stress are shorter
durations in the field, with periods of rest and more staff rotations.

Psychosocial
support programmes are in place for disaster survivors – mostly led by
NGOs, the Department of Health or the Department of Social Welfare
Department (DSWD) – but the Philippine government only provides help for
emergency workers on an “as-needed basis”.

Narradelle Bue,
information officer for the DSWD local office in Zamboanga, pointed out
that “The urgency is to attend to victims first. But it is true that now
the lines between victims and responders are blurred.”