Indonesia’s economy grew by roughly 6 percent in 2013, but its poverty reduction has nearly stalled with almost half the population living in poverty - and experts struggling to identify and serve the neediest among them.

The decrease in the official poverty rate from 2011-2012 (half a percentage point) was the smallest since 2003, according to the World Bank as cited by Australian National University.

Social targeting - the process used to identify people most in need of social assistance - in Indonesia has improved in recent years, say analysts.

But with some 11.4 percent of the population living in poverty (and another 40 percent hovering near it), the cyclical nature of poverty, time lags between identifying the poor and getting them assistance, and different ways of implementing national welfare programmes at the community level, have all made it difficult to keep Indonesian families from falling into poverty, despite the government's goal to cut poverty to 8 percent of the nearly 247 million populationby 2014.

With some 3 percent (nearly eight million people) still to go and only two months until 2014, it is imperative not only to expand poverty alleviation initiatives, but also ensure their efficiency, say experts.

With fuel prices that have risen three times in the past decade and ongoing increases in rice prices (in a heavily rice-dependent country), the government has responded with several social safety nets this past decade.

The government first introduced the Bantuan Langsung Tunai (BLT), an unconditional cash transfer now known as the Bantuan Langsung Semetara Masyarakat (BLSM), to 19 million households every three months from 2005-2006, and from 2008- 2009, to smooth over fuel price shocks.

In June 2013 the government allocated nearly US$829 million to the BLSM, distributing $13.35 to each of 15.5 million households twice between June and October.

The National Team for Accelerating Poverty Reduction (TNP2K), established by the government in 2010, oversees implementation of all public poverty reduction programmes.

The excluded fight back

A number of these initiatives, particularly cash transfers, have instigated protests throughout the past decade, while failing to lift significant numbers of households out of poverty, causing analysts to question the anti-poverty schemes’ scope and efficacy.

“If a poor household was not nominated, they were not assessed, and many of them missed out on the programme,” reported the World Bank in 2012.

Until recently families had no official recourse to challenge BLT classification, resorting instead to protest.

There were protests in 56 percent of communities where BLT was implemented between 2005 and 2008 linked to perceptions of favouritism.

In a West Papuan community, villagers jailed a village chief and his treasurer in 2005; in Central Java in the same year, the community verbally insulted a village leader responsible for eligibility until he offered to resign, according to the 2012 study co-commissioned by TNP2K.

Another programme that put a strain on community relations that has “abated but not disappeared” according to a 2012 World Bank report is Raskin, which provides 17.5 million households with 14kg of subsidized rice monthly.

Rice typically costs 40 US cents per kilogram; the subsidized price is almost half, and covers 30-40 percent of a household's average total rice consumption, according to the Asian Development Bank.

Village officials manage the subsidy, and often redistribute rice to the whole village to share equally. As a result, an estimated 71 percent of the lowest three socioeconomic groups - the targeted beneficiaries - receive subsidized rice, but it may be less than what is intended for them, says the World Bank.

However, in a report released one year after Raskin’s implementation, the Organisation for Economic Co-operation and Development noted the “flexibility in local level implementation may have even improved targeting with pressure for fairer distribution at the local level and allowing newly poor families to access the subsidized rice”.

The country’s current social targeting methodology, introduced in 2011, is a database of households’ socioeconomic indicators (excluding income due to lack of data) gathered every three years by the Central Bureau of Statistics.

“Before the government adopted a unified database in 2011, each programme had [its] own list and target of people. It was all very confusing because of leakage [when resources intended for the poor flow to affluent groups] and overlap,” said Winoto from UNICEF.

In addition, the government introduced Kartu Perlingdungan Sosial (KPS) social security cards in June 2013 for the country’s poorest 25 percent that were eligible for Raskin, BLSM, and BSM; without these cards, families will not be considered for enrolment.

Families that think they were unfairly excluded in the past from any social assistance programme can now apply to their village head to be re-assessed. Card holders can also file complaints on a newly-established government website for citizen reporting which includes reporting applications for smartphones for download.

“Coverage has improved. However, we have to recognize a few challenges,” said Winoto from UNICEF, who explained that household data is only collected by the Central Bureau for Statistics every three years, and the rapid rate at which people can fall into poverty means “a lot of people are still being missed in safety net scheme[s].”

A Papuan woman carrying her son in Papua. The region is one of Indonesia's poorest. Approximately 35 percent of the Papua's 2.6 million inhabitants live below the poverty line 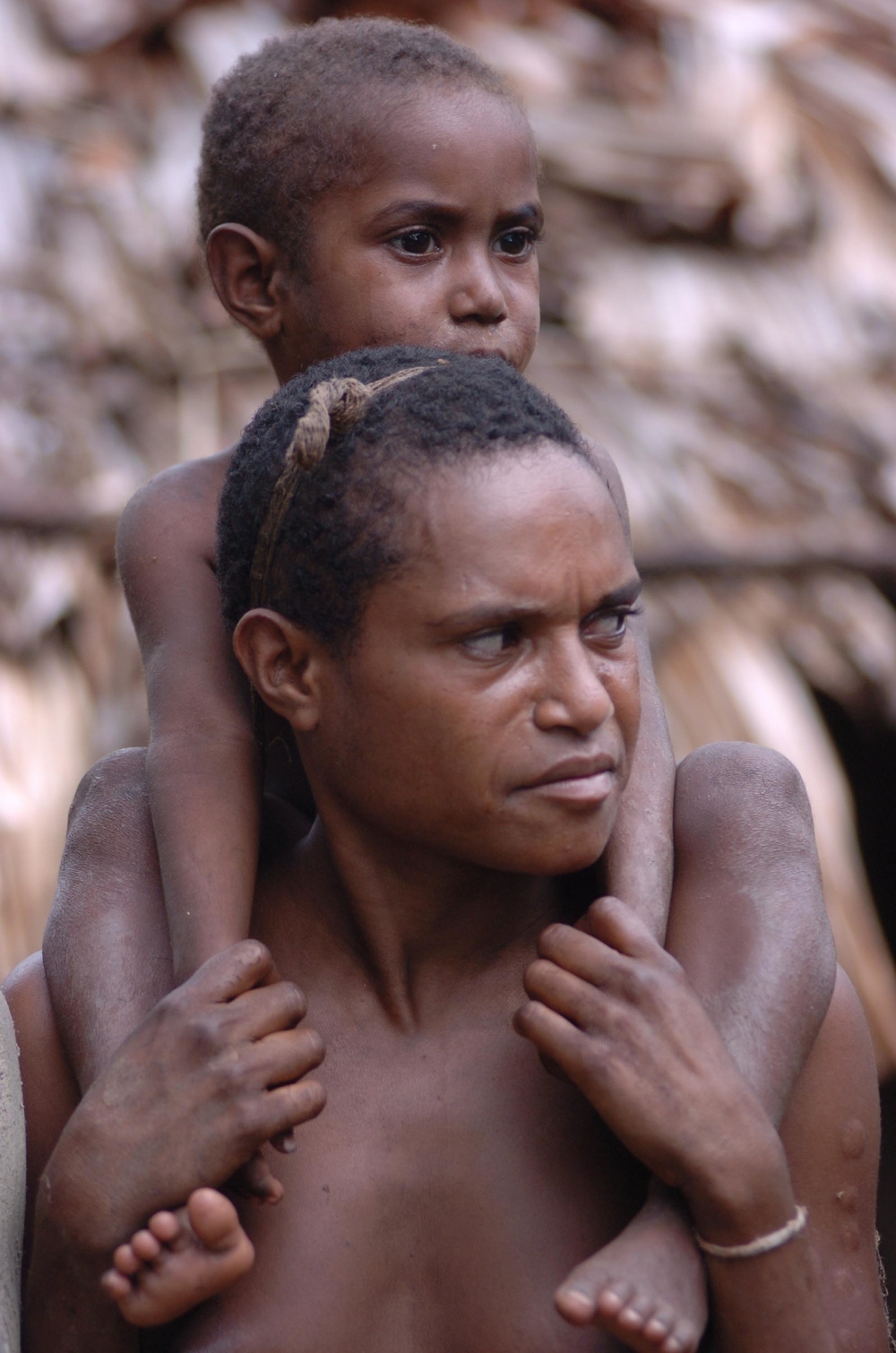 Involving the community is “key” to finding residents who may qualify for social assistance, but are falling through safety nets, said Winoto.

Village chiefs there recruited data collectors from the community to identify households with children who had dropped out of school and were eligible for cash aid. Since then, more than 3,000 children have been identified and returned to school with social assistance to support them, according to local media.

In 2010 the same concept was tested in East Nusa Tenggara Province in 132 villages.

Analysts say it is no surprise that a country with such a large population (fourth largest in the world) that was classified a low-income country only a decade ago would still struggle with poverty - and by extension - targeting assistance.

However, the World Bank has noted that the challenge of helping Indonesia’s poorest is not only an issue of targeting, but also of inadequate resources invested in social assistance.

“While targeting is not perfect in Indonesia, most of the poor will be receiving at least one of these [social assistance] programmes... [but] there is a question as to whether they receive enough assistance for their needs,” said an economist with the World Bank in Jakarta, Matthew Wai-Poi.

Indonesia invests 0.5 percent of its annual $878.2 billion GDP in social assistance, as compared to a 2.6 percent regional average for Southeast Asia.

“We are yet to have established [sufficient] social safety nets,” said Arianto Patunru, a local economics researcher for the University of Indonesia and Australian National University.