As the UN Refugee Agency (UNHCR) manager for the camp, which has now become the fourth largest population centre in Jordan, he has been tasked with bringing order to life here.

More than a year after the camp’s founding in July 2012, Kleinschmidt describes it as a settlement slowly transforming into something much more permanent.

But this transformation has consequences. One of the demands of an increasingly long-term operation is a greater focus by UNHCR on the camp’s governance - a sensitive area at the crossroads of politics and humanitarian relief.

Kleinschmidt has extensive plans for a governance structure: 12 districts with a variety of committees, assigned administration and humanitarian personnel per district, and a central administration headed by a Jordanian deputy governor.

“Traditional leaders” who have emerged from within the camp and are trusted by UNHCR and the Jordanian authorities may be integrated into some sort of representative camp committee.

But these plans have been met with fierce opposition by various self-appointed street leaders in Za'atari, who have long profited from the disorder and built their own power bases.

The clash highlights the challenge of trying to introduce governance structures to a refugee camp from above when there has already been something - unhealthy as it may be - forming at the grassroots.

Size and time can present major challenges to UNHCR in managing camps, French anthropologist Michel Agier suggests in his critical book Managing the Undesirables: Refugee Camps and Humanitarian Government. As soon as the camps last beyond the emergency phase, they transform into spaces with which people begin to identify.

“In effect, while developing in material terms, and to a degree also economically, the refugee camps form themselves into social and political milieus,” Agier writes. He describes the “permanent paradox”, a life of refugees in camps “between an indefinite temporality and a space that is transformed because its occupants necessarily appropriate it in order to live in it.”

This is certainly the case in Za’atari.

“Some time ago, we had no idea who is who in the camp. There were protests and fights all the time,” Kleinschmidt explains, leaning back in his chair in the shadow of an awning between the containers of the so-called base camp, where humanitarian agencies have set up their offices. Now his focus is more on long-term administration and his plans to establish an all-encompassing electric grid in the camp, as well as a network of public transportation.

“In the end, what we see here is a temporary city in the making,” he says.

In the Sham-Élysées - the shopping street in the camp, named after the Champs-Élysées in Paris and a pun on the popular name for Syria: `al-Sham’ – businesses run into the wee hours of the night.

A young Syrian named Qassem proudly presents the construction site of his “shopping center”, comprising five white pre-fabricated containers, or “pre-fabs”. Soon it should be selling imported goods from Syria, he explains.

Some refugees have built themselves “mansions” by grouping together several pre-fabs, while one has even opened an improvised swimming pool to which he asks entry fees.

As Za’atari transforms from a hasty emergency response into a more permanent settlement, with no clear end on the horizon, many new challenges are surfacing for the camp’s management, among them politics and crime-control. The need for sustainable governance has become all the more clear.

According to Liisa Malkki, an expert on refugee camps and an associate professor of anthropology at Stanford University, while old power structures often remain relevant, refugee settings also create opportunities for new people to become influential.

Some so-called street leaders have used the smuggling of humanitarian goods, and even amphetamines, to build their power base.

Some achieved authority as rebel leaders in the conflict in Syria, others established themselves by being among the first to arrive in Za’atari. “They came with their men and controlled local business and other things in the camp, often making a profit,” said Kleinschmidt.

Bulldozers are currently digging a deep ditch around the whole camp to clamp down on smuggling, which Kleinschmidt hopes will reduce the influence of some of the street leaders.

"The new leaders will be traditional Syrian authorities, sheikhs, who bring wisdom with them. They don’t need to scream in order to earn the people’s respect."

Each of Za’tari’s planned 12 districts will accommodate around 10,000 residents. Leaders from each district should be represented in a yet-to-be finalized political structure. In addition, a new initiative funded by the US government will create a neighbourhood watch: out of 1,000 voluntary candidates, about 600 will be chosen in consultation with the “traditional” refugee leadership to patrol the streets, after background checks by the Jordanian police. They will work hand in hand with community police units, supported by Jordanian law, customary rules and camp rules.

These new security forces should “neutralize” and “isolate” the groups that have become instruments of corrupt and criminal structures dominating parts of the camp, whom Kleinschmidt accuses of extortion, theft and smuggling.

“The new leaders will be traditional Syrian authorities, sheikhs, who bring wisdom with them. They don’t need to scream in order to earn the people’s respect.”

One of them is an elderly man named Abu Wael, dressed in an ankle-long white garment, a `thawb’. “I don’t have time today; a delegation from the Jordanian prince is coming,” he said, passing by the base camp, rushing to the important meeting.

According to Kleinschmidt, just the day before, Abu Wael and some other elders sat together in one of the “mansions” in the camp and engaged in traditional conflict resolution, after an unmarried couple was caught sleeping together. They negotiated the matter between the families.

These new leaders should support UNHCR to build up a reliable structure of governance in the camp, while also helping to cut down on crime and delegitimizing the self-made leaders.

But the “old leaders” promise resistance. One of the more powerful leaders among them is Abu Hussein, 49, from the southern Syrian city of Dera’a and a former commander in the rebel Free Syrian Army (FSA). For most in the camp he is known simply as `Aqed’, the “Colonel”.

From a side street just off Sham-Élysées, a metal door leads to an improvised garden with patches of artificial lawn spread over the sandy ground. It is surrounded by several inter-connected pre-fabs that form the space where Abu Hussein lives with his wife and children.

“I am against everything going wrong here in the camp,” he says, as his wife serves a plate of self-cooked mlehi (meat with yogurt sauce and bread). “Nothing inside this dish is from UNHCR, that’s for sure,” he says. “We don’t want to put anything from them in our pocket.”

Abu Hussein, 49, from the southern Syrian city of Dera’a is a former commander in the rebel Free Syrian Army (FSA). He is now one of the most powerful men in Za'atari camp for Syrian refugees in Jordan. UNHCR is trying to encourage traditional leaders t 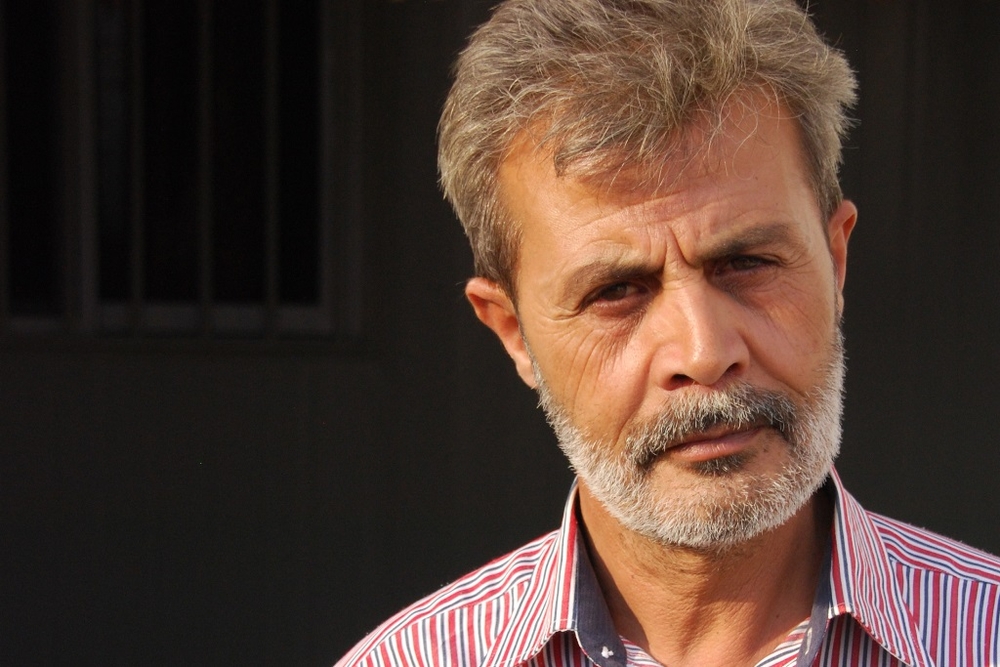 Abu Hussein is respected by many in the district he rules. He is often seen walking into the main street at night, where groups of young men are waiting for him. He sends them to patrol side streets in pairs, organizes female guards in community kitchens and keeps everyone “safe”, he boasts. One of his self-assigned duties is to organize workers in the camp. For the few positions available with humanitarian organizations for camp residents, he determines how shifts rotate and who is allowed to fill the positions.

However, Kleinschmidt says many of these “bosses” in the camp are already on their way down.

"They have a chance if they cooperate. Otherwise the Jordanian authorities will deal with them accordingly," he said.

The new system of governance should decrease the influence of people like Abu Hussein by giving other people in the camp a stronger voice.

Abu Hussein oversees an entire district. One notch below him are “street-leaders” who deal with the everyday problems in the camp.

One of them is Abu Asim from the Syrian village of al-Sanamen, in Dera’a Governorate, from where he fled with his family after what he says was a massacre last May. His own house was destroyed by a bomb, he recalls.

Sitting on cushions between two containers, Abu Asim pours sticky tea into his cup and lights a cigarette.

“To be respected in this camp,” he said, “you need to be wise and politically strong.” Via phone calls and personal visits, he solves “all kinds of problems”, like quarrels, water disputes, distribution issues, or broken toilets.

He too has heard about the newly planned committees in the camp. “I think UNHCR has to keep its hands away from politics,” he cautioned.

The power struggles in Za’atari reflect the ethical dilemmas involved in the transformation from humanitarian emergency response to long-term refugee crisis. In his book, Agier writes that refugee camps - and humanitarianism more broadly - have become part of a global system to “manage” what are often seen as “undesirable” refugee populations and separate them from the general public.

“Humanitarian intervention borders on policing,” he writes. “There is no care without control.” This “humanitarian government”, as he calls it, deprives refugees of the practice of citizenship.

Although refugee self-governance always occurs when people live in settlements long enough, the official position of the humanitarian community has long been that such politics do not take place, Malkki, the Stanford researcher, told IRIN.

But Kleinschmidt is different. He has long advocated treating Za’atari like any other city in Jordan. “The humanitarian practice has long been to manage a camp for 20-30 years in more or less the same [short-term] way, instead of building up sustainable service delivery and governance.”

The Ministry of Interior’s Syrian Refugee Camp Directorate did not respond to IRIN’s request for an interview.

However, according to Oraib Rantwai, head of the Al-Quds Center for Political Studies in the capital Amman, the Jordanian government has been cautious in accepting any permanent structures being built in Za’atari for fear of angering its local population, which is suffering from strained services as a result of the refugee presence.

“People in Jordan ask themselves: how long will these refugees stay?”