The frequent but low-impact disasters in Laos, home to just 6.1 million inhabitants, are seldom in the limelight compared with neighbouring flood-prone Thailand to the west, cyclone-hit Myanmar in the northwest, and earthquake-susceptible China to the north.

The disasters in Laos appear puny in comparison, but increasingly volatile weather conditions are taking a toll on the 80 percent of the population who do not live in the capital, Vientiane, and depend on natural resources for survival. They are dispersed across three widely diverse geographical environments in the North, Central, and Southern regions, which range from forested mountains to low-lying alluvial plains.

“The climate diversity between the north, central and southern regions of Laos means that communities in each area face different risks associated with climate instability, with a uniform consequence on food production,” Edward Allen, a technical adviser and climatological dynamics expert for Southeast Asia at the Laos Institute for Renewable Energy (LIRE), a Vientiane-based non-profit research organization, told IRIN.

According to the UN Food and Agriculture Organization (FAO), farming accounts for nearly half the gross domestic product (GDP) (2012 US$9.3 billion), with either upland or lowland subsistence rice-growing being the main agricultural activity. Building resilience through livelihood diversification is key to mitigating the harsh effects of natural disasters.

Laos, almost the same size as the United Kingdom, is the world’s 42nd most vulnerable country to climate change, the Notre Dame Global Adaptation Institute (GAIN), a US-based institute on climate change and risk management reported, citing high vulnerability (sensitivity and exposure to climate-related hazards), and a low coping capacity to deal with the ill-effects of weather extremes due to the high proportion of subsistence farmers without alternative livelihoods.

“While urban workers have other options, subsistence farmers often do not have those same opportunities,” Jan Gerald Kellett, senior research advisor on climate and environment at the London-based Overseas Development Institute (ODI), told IRIN.

The World Food Programme (WFP) says increasing floods, droughts, landslides, and late- or early-onset of seasons have destroyed crops, contributed to outbreaks of dengue [fever] and livestock death, resulting in an annual loss equivalent to roughly 0.7 percent of GDP since 2009. The Global Disaster Report in 2011 rates Laos as the top country in the region for gross loss due to annual natural disasters.

The government has highlighted its commitment to mainstreaming climate change adaptation, and works collaboratively with international humanitarian and development organizations to strengthen resilience. “There is a high need for a joint approach where government, development partners and humanitarian agencies can join forces and work together towards reducing the risk and building preparedness capacities both at the institutional and community level,” Ghulam Sherani, head of emergency preparedness and response units for WFP in Laos, told IRIN.

Compared to the number of people affected by disasters the past thirty years in the Philippines (nearly 130 million), Thailand (80.7 million ) and Vietnam (nearly 75 million) in the past three decades, the estimated 5.5 million affected and 207 killed in Laos, according to a 2013 World Bank report, may seem small, but it is almost 90 percent of the population.

In mid-March 2011, an unusual drop in temperature in central and northern Laos to 7.4 degrees Celsius killed at least 7,161 cattle and 3,744 buffalo, causing a loss of more than US$2.4 million to small-holder farmers, and is only one example of the impact of extreme temperatures on rural communities.

“There has been an increase in the intensity and extent of disasters associated with the change of climate. [In 2012 and 2013] too little or too heavy rain in short periods… [caused] serious damage to the livelihoods of communities,” Sherani said.

The Laos government - which became a signatory to the United Nations Framework Convention on Climate Change (UNFCCC) in 1995, and the Kyoto Protocol in 2003 - has taken key policy strides to highlight the importance of climate change and preparedness for its effects. A climate change office secretariat to the National Environment Committee was established in 2008, and the National Adaptation Programme of Action (NAPA) was formulated in 2009.

But NGOs say that outside of Vientiane, few villages know about adaptation to climate change or practice disaster preparedness. “Even when a small-scale disaster occurs, it can lead to big damages and [have a significant impact ] on lives and properties,” said Sudanshu Singh, the senior programme officer in Asia Pacific Humanitarian Response for Act Alliance - a Geneva-based international humanitarian coalition of more than 140 churches and humanitarian organizations.

In 2013, tropical storms Jebi and Mankhut hit northern and central Laos from June to August, affecting 119,625 people with flooding, and causing more than 20 casualties in seven of the country’s 17 provinces, according to the Assessment Capacities Project (ACAPS), a Geneva-based NGO consortium.

Recent interviews with villagers and field staff by Act Alliance found that in the northeastern town of Vieng Phouka in Nuang Namtha Province, along the border with China, villagers have been harvesting only 50 percent of the usual yield for up to the past three years due to flooding and a prolonged rainy season.

“The agriculture land and livestock of the affected population has been swept away [leaving communities without] land to produce food and raise livestock, which are their main food source and income,” said Singh. Rural communities are particularly impacted by natural hazards, and “without that land they often have no capacity to cope,” said the ODI’s Kellett.

A road that just been cleared from a landslide in Ban Houythao, northern Luang Prabang Province 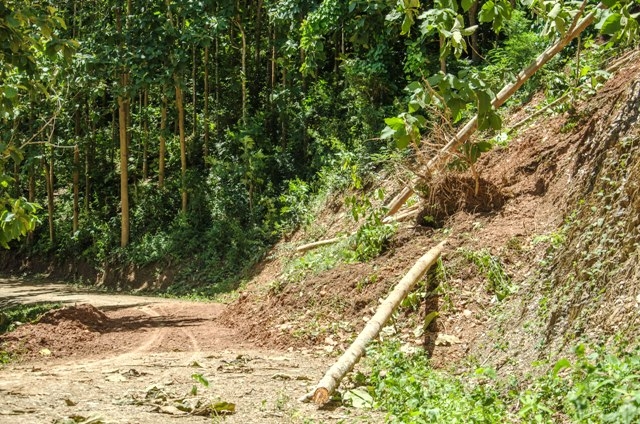 Flash floods have caused landslides in 11 out of 18 provinces since late 2012, according to OCHA. The UN Development Programme (UNDP) says the number of landslides has been considerable in the mountainous territory of Northern and Central Laos, and attributes this to a combination of rainfall, de-forestation, and agricultural activities on steep slopes and marginal agricultural lands.

Care International, which has worked in Laos in livelihoods and food security for the past two decades, is often forced to shut the field office in southeastern Attapeu Province during the rainy season from August to October, when roads do not survive typhoons and flooding. “Accessibility is our biggest issue, as landslides make roads impassable, cutting people off from aid and market access all through the wet season,” said Glenn Bond, the Laos country director.

The cost of climate-proofing rural infrastructure like roads would be “immense”, and beyond the capacity of the government’s current budget, according to UNDP.

In southern Laos, drought may be implicated in the epidemic of dengue fever in August 2013. Up to 50,000 people in 17 provinces were infected and 92 died.

“Heavy rains usually help wash away larvae and flush breeding areas, and therefore reduce the number of mosquitoes. It also reduces the survival rate of the Aedes mosquito, which is mainly responsible for transmitting the fever,” Dapeng Luo, team leader of emerging disease surveillance and reponse units for the World Health Organization (WHO) in Laos, said.

The international community in Laos is active in strengthening preparedness capacities at both the institutional and community level, but the initiatives remain small-scale and ad hoc. “There is no clear coordination mechanism that can bring these efforts together and connect all the scattered interventions for a more synergetic and programmatic approach,” said WFP's Sherani.

In their co-project Mainstreaming Disaster and Climate Risk into Investment Decisions (2012-2015), the World Bank and the Ministry of Planning and Development warn that adaptation needs to be further mainstreamed into public infrastructure investment and industrial development.

“In recent years, under-budgeted and under-regulated interventions have led to increased, rather than reduced, susceptibility to climate change impacts,” the Asian Disaster Preparedness Center, a regional resource, noted in their 2012 annual report.

With an economy growing roughly eight percent per year, UNDP's Staab cautioned that without proper coordination to integrate preparedness into development, “the envisaged economic development will more and more exacerbate environmental damage.”