In Nepal, where rugged mountainous terrain isolates millions of people from life-saving health care, markets and education, experts say the country’s roads are in sore need of more focus and investment.

Nepal has built about 7,000km of roads nationwide over the past decade, according to the World Bank, but this still leaves more than half the population without access to all-weather roads in a country where millions struggle to reach safe, nutritious food, and which ranks as one of the world’s worst places for a child to fall ill (out of 161 countries evaluated by NGO Save the Children) due to women’s and children’s poor access to health care.

Nearly half of Nepal’s 27 million people live in rugged hill and mountain areas. People living in the mountains (roughly 7 percent of the population) report some of the weakest development indicators nationwide. The national average for children under the age of five who are chronically malnourished is 41 percent; this figure exceeds 60 percent in the mountains.

According to a 2010 report by the World Food Programme (WFP), transportation costs are the most significant factor for food prices in the mountains, and road access the primary determinant of those costs. Furthermore, food wasted in transit due to lack of roads, or poor quality ones, can impact the market value of agriculture products.

According to recent market indicators, a kilogram of coarse rice that costs the equivalent of 39 US cents in Kathmandu, can cost three times that amount in mountain markets of Dolpa District (in western Nepal’s Karnali Zone) that lack road access.

Though Nepal has 23,029km of roads and construction is steadily increasing, experts are calling for not only more roads, but also quality ones.

According to the government’s most recent Nepal Living Standards Survey in 2011, Nepalis living in rural areas - especially in hills and mountains - report roads in their areas are unsatisfactory.

Only 12 percent of Nepalis, including those living in urban areas, consider the roads where they live “good”.

Just 42 percent of Nepal’s roads are blacktopped, with the rest a combination of gravel, which can survive some harsh weather, and earthen, which can wash away during seasonal rains, government figures show.

Travelling across difficult terrain has been cited by HIV service providers as one reason patients fail to adhere to treatment regimens. Due to the lack, or poor quality, of roads in rural Nepal, maternal healthcare facilities may be more than a day’s walk away which, practitioners say, can be deadly.

“If women can’t get to a healthcare facility in time, they either die or have a fistula,” Shirley Heywood, a gynaecologist who has been working in rural Nepal for a decade with the International Nepal Foundation, told IRIN.

Obstetric fistula is a condition caused by prolonged and obstructed labour resulting in a hole in the birth canal which leads to continuous leakage of urine. According to the UN Population Fund an estimated 4,602 women in Nepal are living with fistula; there are up to 400 new cases annually.

“I have had patients who are carried for more than two days to us for fistula treatment. I hear all the time how we need to increase capacity for fistula surgery in Nepal, but I don’t think that’s the whole picture - access is a huge issue, and roads are a vital part of that,” Heywood said.

Analysts have also pointed to the lack of reliable road access as a factor in weak education achievements, including the 35 percent of Nepalis who remain illiterate.

“Roads connect people to markets, which has shown improvement in local economies,” Marco Cavalcante, head of programmes for WFP in Nepal, told IRIN.

Research has shown that roads benefit farmers by slashing transportation and farm-to-market time periods, meaning that with less food wasted during transit, more can be sold at market.

Clearing a mountain path in the Far West of Nepal 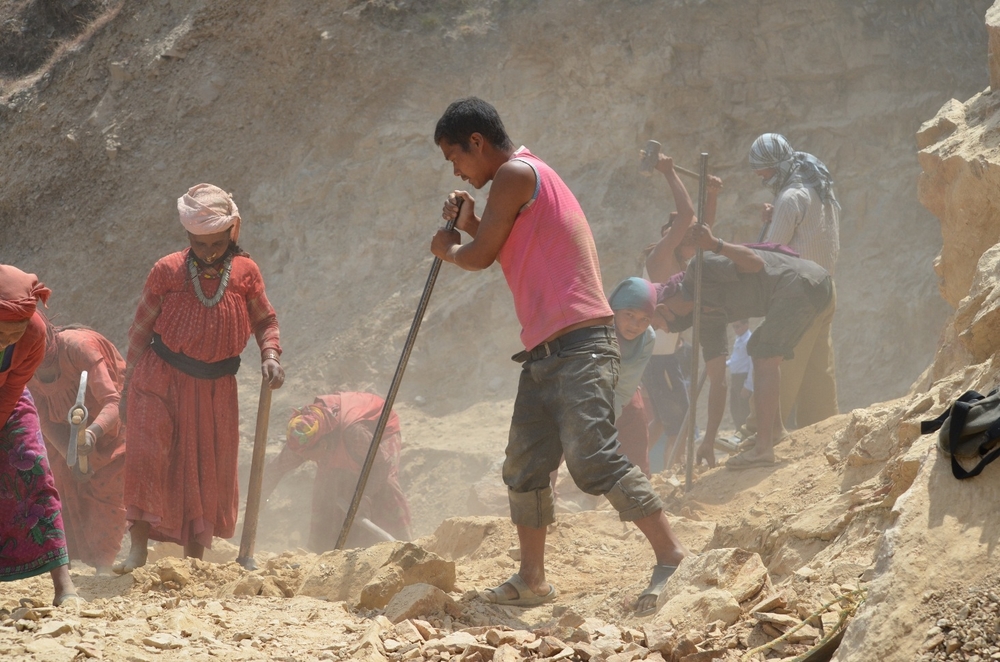 The World Bank and UN Food and Agriculture Organization have identified well-constructed and well-maintained roads as a crucial aspect of creating an “enabling public environment” for development and a safeguard against food wasting.

But, Cavalcante pointed out, there are other benefits that come with roads reaching people.
“There is also a social protection component. People connected by roads can access a better life - hospitals, ideas, technologies. It’s not always quantifiable,” he said.

“Road building opens a two-way process,” said Cavalcante. “Once the road is complete, people have access to markets, and modern commodities and technologies and ideas have access to the people,” which may have unexpected negative impacts, warn experts.

“Outside influences change major aspects of peoples’ lives, and they can be a shock to the system,” said Jagannath Adhikari, an agricultural scientist and author of several books on development in Nepal, adding that villagers in Nepal’s Far West region had told him they noticed their children became more popular as marriage prospects once their village was connected by a road.

A debate in 2012 over the introduction of Monsanto-manufactured hybrid maize seeds in Nepal spotlighted issues of local ownership and the influence of subsidized foreign products on rural farmers.

According to Ramesh Adhikari, paediatrician and author of a US Agency for International Development literature review on nutrition in Nepal and expert on the Karnali region, one of the most food insecure areas of the country, “isolated villages can show better nutrition indicators than those connected to the road network because not having access to a market means people eat the nutritious food they grow rather than sell it for cash.”

He added it is crucial that road development is coupled with education to prepare communities for access long denied.

“Just because isolated villages might have better nutrition indicators doesn’t mean we shouldn’t build roads to them - it means the government should have strong education programmes and policies to regulate corporations that want to sell products all over the country to newcomer consumers,” he concluded.

WFP Nepal runs small agriculture and business development projects in communities, simultaneous with road construction, to prepare them for their new levels of access.

For WFP “roads are not a panacea,” but rather one component in developing markets, livelihoods and food security - as well as options.

“In the past, a sick person's family would need to appeal to local political leaders for a loan to pay for a plane ticket to Kathmandu or even just to schedule the flight, now they have a road - there’s competition, there are options,” said Adhikari, the agriculture scientist.

Recent reports from Jumla, a remote district in Karnali region, chronicled the decline in demand for donor-delivered rice. Officials attributed the change to the district now being connected to a road, which has created competition by boosting consumer access to other products.