A month after the Indian Ocean tsunami struck in December 2004, affecting millions, 168 countries signed on to a 10-year plan to make the world safer from natural hazards. Yet the plan, the Hyogo Framework for Action (HFA) 2005-2015, focused primarily on “what to do to prevent disasters, but not enough on how to implement it,” says Neil McFarlane, chief coordinator and head of all regional programmes at the UN Office for Disaster Risk Reduction (UNISDR).

Countries have since begun discussing what a follow-up action plan, the Hyogo Framework for Action 2 (HFA2), should look like. The results of these talks, a sketch of the HFA2, will be presented at the Fourth Session of the Global Platform for Disaster Risk Reduction, which begins in Geneva on 19 May.

A draft will be finalized towards the end of 2014, for consideration and adoption at the World Conference on Disaster Reduction in Japan in 2015.

The HFA2 will need to take on a number of emerging risks and concerns. While the HFA has helped countries reduce the loss of human lives, the economic consequences of natural disasters have continued to rise. For three consecutive years, natural hazards have cost the world more than US$100 billion a year, according to data from the Brussels-based Centre for Research on the Epidemiology of Disasters (CRED) released in March 2013.

Additionally, disaster risks are changing: The effects of the changing climate are expected to prompt more intense and frequent extreme natural events, including floods, droughts and cyclones. Urban populations are growing, as is demand for food, ratcheting up pressure on resources like land and water.

In tackling the HFA2, experts are discussing how to improve accountability. "We have a framework with options to develop good disaster plans in the Hyogo, but how do we make governments, agencies… ensure it is implemented?" Tom Mitchell, head of the climate change programme at the Overseas Development Institute (ODI), told IRIN.

Mitchell says one of the major weaknesses of the HFA is its failure to ensure that "well-crafted" disaster risk reduction (DRR) policies were actually implemented. The agreement is voluntary, and there are no penalties for failing to put in place measures to protect citizens.

"Because it [HFA] is voluntary, we have to ask how… effective it can be," remarked Frank Thomalla, senior research fellow with the Stockholm Environment Institute (SEI) in Asia.

Some question whether the world should consider a legal disaster-prevention treaty with a provision for penalties.

The new plan’s timing is significant for the global community; 2015 also marks the end of the Millennium Development Goals and possibly the implementation of new Sustainable Development Goals (SDGs), which are still under discussion. A new agreement on addressing and adapting to climate change is also likely to be put into place around that time. Aid agencies and think tanks are all calling on the global community to consider the synergies among these policy-shaping developments.

Many observers now question whether DRR policies should become a part of the legal climate deal, which might ensure their implementation. Countries’ DRR activities are increasingly considered part of their climate change adaptation plans, and are being funded as such.

But there is no appetite for a legal treaty on DRR, says UNISDR's McFarlane.

Harjeet Singh, ActionAid's international coordinator for DRR and climate change adaptation (CAA), says he is uncertain if a legal treaty “will bring about a dramatic change… After all, we have seen how [the UN’s] climate convention (UNFCCC) … failed to deliver in the last 20 years."

Besides, the climate change deal will not consider geophysical events such as earthquakes and other triggers of potential disasters unrelated to climate, he added.

"Many of the drivers of vulnerability result from inequality and marginalization, meaning certain regions and social groups are more vulnerable to hazards than others and are more strongly affected by the impacts"

That fact, plus the range of social and economic factors contributing to disaster risk, calls into question the rationale for viewing DRR, CCA and development from a purely climatological perspective, SEI's Thomalla told IRIN in an email.

But the Cancun Adaptation Framework adopted by countries at the UNFCCC talks in Mexico in 2010 urges countries to implement the HFA, so it does make it a part of a stronger commitment linked to climate change says UNISDR's MacFarlane.

Under the HFA, countries are required to report on how far they have complied with implementing DRR strategies and policies. But how "reliable is this data?" asked Thomalla. "How much opportunity is there for governments to 'manipulate' the information in order to be seen to be doing something?”

For instance, a country might report to the HFA that it has established an early warning system to reduce hazard vulnerability. “But how can we be sure that the system works…? That people know how to respond to the warnings?” Thomalla said.

There is no proper baseline at the start of HFA, nor are there specific targets for countries to follow, said Singh.

"Targets and milestones for implementation should... be relevant and realistic for each country and agreed on through multi-stakeholder consultations," noted Mitchell in a briefing paper co-authored with colleague Emily Wilkinson.

McFarlane and Mitchell suggest the development of a peer-review mechanism, which is just taking off in some developed countries, could be an effective way to ensure countries comply.

UNISDR Chief Margareta Wahlstrom said there has been a change in mindset since HFA: “The most visible signs of this change are summarized by the facts that 121 countries have enacted legislation aimed at reducing the potential impact of disasters, and 56 countries have national disaster-loss databases, which illustrates the growing recognition that you cannot manage risk management if you are not measuring your disaster losses."

This suggestion has support. Singh says, “Legislation to ensure safety and security of people is a good first step.” But it has to be implemented effectively all the way down to the community level, and must take into account the voices of the poor and women, he added.

Thomalla says a rights-based approach would be a good way to address DRR "because many of the drivers of vulnerability result from inequality and marginalization, meaning certain regions and social groups are more vulnerable to hazards than others and are more strongly affected by the impacts.”

But, again, creating global legislation could be problematic, he noted. "Monitoring and enforcement will also be difficult. Rich countries must come forward to provide resources and transfer skills to developing countries to reduce disaster risks."

Most experts pin their hopes on the new-found interest in "building resilience". Resilience is billed as a concept that will better link development, DRR and CCA by bringing the humanitarian aid community, which deals with disasters, closer together with development agencies. A focus on resilience might also help push for the implementation of DRR plans and promote funding.

A student surveys the remains of her house in a village in West Aceh after the 2004 Indian Ocean tsunami. The student survived because she had left the village for a holiday, but she lost 40 members of her family 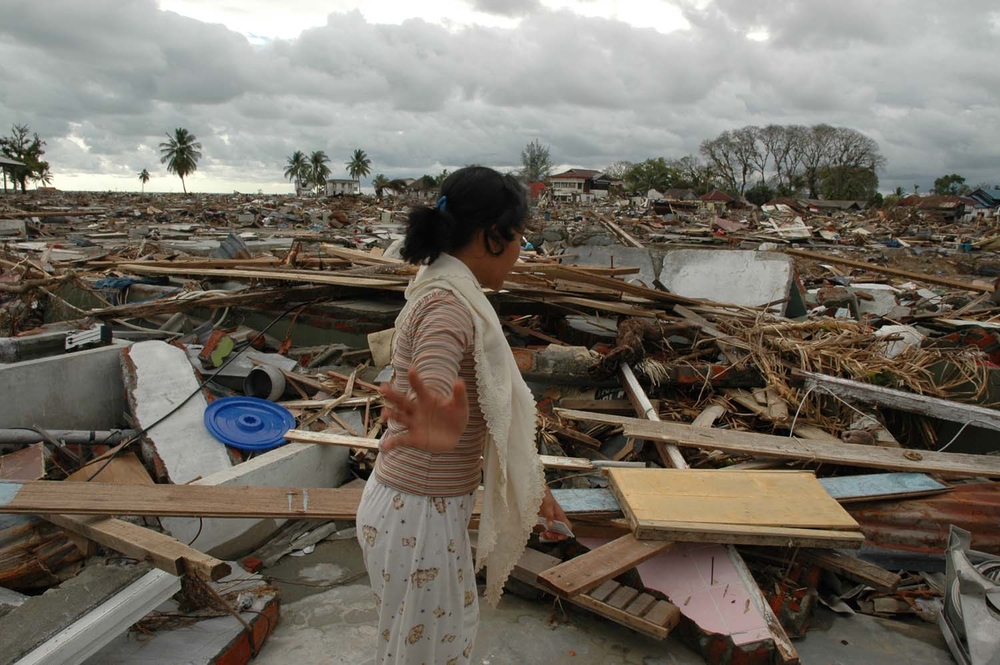 “The current separation of what is mainly [a] humanitarian response to disasters, through DRR and CCA, from business-as-usual development funding no longer makes sense," said Thomalla.

“New development goals must factor in risk, whereby all goals, to the extent possible, are risk- informed,” said Antony Spalton, the DRR specialist with the UN Children's Fund (UNICEF). "Given the significance of the risks posed by climate change, fragility and conflict, a post-2015 framework that better draws together DRR, climate change adaptation and conflict prevention/peace building under a goal or target for resilience could be considered.”

UNISDR has already drafted a resilience-based disaster plan for the post-2015 development agenda, the Plan of Action on Disaster Risk Reduction for Resilience. It calls for an assurance that “DRR for resilience” is central to post-2015 development agreements and targets. It calls for timely, coordinated and high-quality assistance to countries where disaster losses pose a threat to development, and for making DRR a priority for UN funds, programmes and specialized agencies.

Singh says countries "should develop a comprehensive resilience strategy rather than a piecemeal …strategy, when ‘pushed’ by donors.”

Building resilience to a range of changes and risks does make sense, according to Thomalla. But we have a long way to go.

"While we have made a lot of progress in thinking about resilience as a unifying concept, we need to strengthen our methods and tools to help… develop the institutions and governance structures that enhance resilience and enable them to measure and demonstrate success," he said.

Ultimately, Singh says, "it all depends on the willingness of country governments to take concrete steps from local to national levels and enhance [the] resilience of poor and vulnerable communities."

McFarlane says there are lots of ideas and suggestions on the table. Stay tuned.