Caridad Calungsod and her three children have been living in a makeshift shelter along the highway leading into Baganga, a coastal farming municipality in the southern Philippine province of Davao Oriental on Mindanao Island that was among the hardest hit by typhoon Bopha last December.

Like many others, her family's survival now largely depends on aid they say has been slow in coming, either due to poor logistics or what many allege has been the disorganized and politicized process of distribution.

"We want to start over, but there is nothing left in this community," the 34-year-old mother said. "It is a struggle to feed the kids every day, sometimes there is not enough food to get by."

Government social workers have struggled to reach remote areas, some accessible only by hours-long hikes. Calungsod, and activists, say relief goods that have made it are parcelled out to local officials who distribute them along political lines.

Survivors IRIN interviewed say unscrupulous politicians are using relief goods to boost their campaigns as the country prepares to vote on thousands of local officials in mid-term elections in May, from village council officials and mayors, to members of Congress and senators.

In January, more than 5,000 frustrated residents barricaded the national highway to protest against what they said was the government's "selective" relief delivery system which, they alleged, favoured large vote-rich areas rather than smaller communities in need of help.

The protest closed the highway for hours, stranding thousands of commuters and motorists. The impasse ended only after local government leaders came to the scene and distributed sacks of rice and other items to the protesters, with a promise to improve delivery to their communities soon.

International humanitarian agencies are reticent to comment openly about the situation because they are required to work closely with the very politicians accused of profiteering, but have expressed concern that tensions in storm-hit communities may rise if aid is blocked during the lead-up to the May local elections.

Local groups whose volunteers have been actively working in storm-hit communities say politicians and their campaign machinery routinely take credit for relief goods, which they distribute in areas where they have big constituencies.

"In some areas the relief packs are repackaged and are being sold," said Vencer Crsisostomo, chairman of Anakbayan, a national youth volunteer organization. "The government's Social Welfare Department should unconditionally release relief items to those in need, rather than [allow them to] be inadvertently used by politicians as a means to campaign."

The relief efforts, he said, have become a tool for politicians to "build mass bases and political machineries" in the Philippines, where analysts blame corruption for pockets of poverty in the lower middle-income country.

In 2012 those surveyed by international corruption watchdog Transparency International for its “corruption perception index” ranked the country 34 out of 100, with zero being the most corrupt.

"This is inhuman and absurd, they should not be selective in distributing relief goods. This is pure politics getting in the way of helping the people," he said. "Where do the monies go? To the campaign machinery, or some politician's pocket? Officials need to be accountable," he said.

"We have had a dialogue with local communities affected by the typhoon and we have told them to submit all the names of those that have yet to receive aid," Resty Macuto, director of the Social Welfare Department's disaster risk reduction and response operations centre based in Manila, told IRIN.

Only one classroom remains in this school after super typhoon Pablo hit Andap, Compostela Valley, Davao, Southern Philippines on December 20, 2012 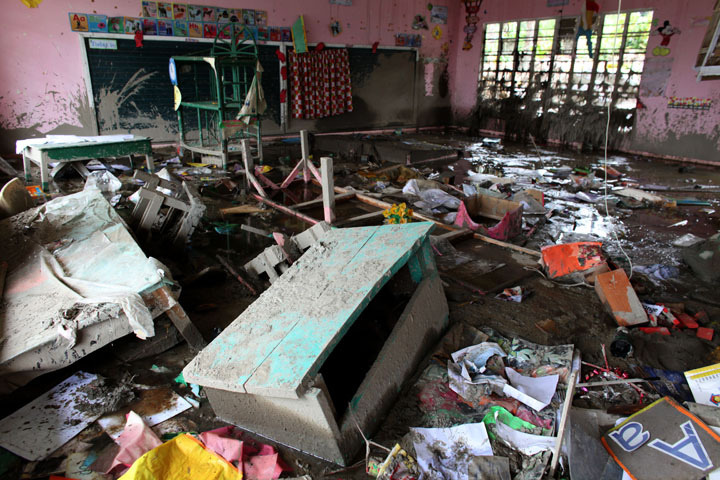 "As far as I am concerned, we have managed to improve the situation," he said, admitting that in the days that immediately followed Bopha, there was some confusion and logistical challenges because the typhoon had cut across large areas in the south, including far-flung tribal communities that even during the best of weather are difficult to reach.

The UN Refugee Agency (UNHCR) estimates up to 80 percent of the people affected by the Category 5 typhoon (winds up to 250km per hour) are indigenous peoples, some living in still inaccessible areas because while the typhoon has passed, the monsoon season with its daily downpours continues.

Arjun Jain, head of UNHCR’s office overseeing the areas hit by the typhoon, told IRIN the “perception of inequitable distribution is creating tensions" between the remote highland indigenous communities and lowland communities. "The upcoming elections are a sensitive period. We have to make sure aid is not politicized, that it reaches communities in critical areas and that it is distributed solely on the basis of need.”

Macuto said survivors might have also been frustrated by the government’s initial requirement to provide "disaster access cards" issued to monitor the flow of aid in communities so as not to duplicate efforts.

In Binondo, one of Baganga Municipality’s more remote communities, most the 1,200 families received the green access cards, but no information about the cards’ importance or purpose.

Macuto said card distribution was suspended in all typhoon-affected areas because the wind and flooding had destroyed the very documentation the government sought.

"It is not true that there is favouritism when it comes to distribution of aid. We are trying to reach everyone concerned, but sometimes it is just not enough," he said.

Catholic Relief Services (CRS) said it has not encountered any problems with “politicized aid" largely because it employed is own staff to distribute. "CRS coordinates information and planning with the local governments, but all distributions are conducted by CRS and local partner staff," said Joe Curry, who coordinates ground activities.

"Emergency aid in the form of food, shelter and cash is getting to the most affected areas and helping tens of thousands of affected families," he said.

"However, there is a large shortfall in the recovery phase. Without more sustained assistance, there is concern that there will be a second wave of disaster when emergency relief ends in the next few months."

Humanitarian groups have requested US$76 million to help typhoon-hit communities build back. Donors have pledged to fund about 40 percent, thus far, leaving close to $45 million in requests unmet.

Bopha, known locally as Pablo, was the first storm to cause so much death and destruction across the southern island of Mindanao in decades. It triggered flash floods and landslides that destroyed large tracts of farmland - including banana and coconut plantations that were the region’s largest cash crops - and submerged entire communities.

In Baganga Municipality, the former coconut-basket of the country, only 2 percent of the coconut trees survived, according to the municipal agriculture officer. The Philippines Coconut Association had no coconut seedlings to provide the municipality (the Association used to get all its seedlings from the municipality). Farmers are being encouraged to plant root crops and vegetables. In total, the typhoon damaged some 321,000 hectares of farmland.

Nearly 2,000 people were either killed or missing and presumed dead, while more than two months later, many of the nearly one million displaced still live in the remains of their homes salvaged from debris, or are staying with friends and families, or are in evacuation centres.

As of late January, the government calculated the typhoon had completely destroyed nearly 75,000 homes and partially damaged another 123,000. Survivors are now being helped to build using fallen coconut trees, local hardware supplies and salvaged materials.

While the international humanitarian community has responded, the International Committee of the Red Cross said this week needs are "still staggeringly high".