Few humanitarian crises receive the attention and engagement of the world that Syria has. States - on both sides of the conflict - have clamoured loudly about the deplorable humanitarian situation there.

Yet, as the head of operations of the Syrian Arab Red Crescent put it at the end of July: “Nobody is really putting his hand in his pocket and putting his money where his mouth is.”

While funding has picked up in recent weeks, UN appeals for more than US$541 million to help Syrians in need inside the country, as well as Syrian refugees in neighbouring countries, are currently 40 percent funded. (The appeals have been revised and increased several times).

Other agencies like Médecins sans Frontières - which has independent funding channels - have also complained that a lack of funds has limited operations.

According to the UN’s Financial Tracking Service, which records all reported donations, donors have given an additional $200 million, outside the two UN appeals. (The International Committee of the Red Cross’s operation in Syria, for example, is fully funded, though its scale of operations is much smaller.)

So why has the funding for the UN and others lagged?

“I keep asking the same question to donors,” the UN’s regional humanitarian coordinator in Syria, Radhouane Nouicer, told IRIN in an interview. “The predominance of the political debate has maybe made many countries not pay enough attention to the humanitarian conditions. That’s my only interpretation.”

But you’ll get a different response from everyone you ask. So IRIN gathered a number of opinions:

“Nobody wants to strengthen the Assad regime by sending aid,” says Joshua Landis, director of the Center for Middle East Studies at the University of Oklahoma, and curator of a widely-read blog on Syrian affairs. “The Western strategy is to starve the regime and feed the opposition. That, of course, is impossible to do without starving all of Syria. Sanctions are a very blunt tool, and they are meant to weaken the regime to get Syrians to revolt against it.

Others have gone further, with one commonly-held view suggesting that donors are intentionally leaving Syria in a humanitarian crisis in order to keep open the door to intervention. Others are already calling for it.

“We have to provide the environment to build the confidence that the [humanitarian] support can be provided. We need safe zones,” said Abdul Latif bin Rashid Al Zayani, secretary-general of the Gulf Cooperation Council.

The Arab League, which has given the World Health Organization $500,000 for its work inside Syria, is aiming to raise $100 million from its members for relief in Syria and refugee host countries.

Russia has given $8.5 million - mostly through the World Food Programme (WFP), the UN Office for Coordination of Humanitarian Affairs, and the ICRC - as well as 80 metric tons of tents, blankets, kitchen kits, furniture and food bilaterally. It says it is considering further assistance through its relief agency EMERCOM and more allocations to WFP.

“There are certain countries that have given more, but at the same time, they are stifling the Syrian people through economic sanctions and providing financial, logistical support as well as arms to the opposition,” said Maria Khodynskaya-Golenishcheva, a diplomat at the Russian mission to the UN in Geneva. “So the numbers themselves can be higher - officially they give more - but at the same time, what they are really doing to the Syrian people raises questions.” (Russia announced in July that it would stop providing arms to the Syrian government until the situation was “resolved”.)

Some donors see a more effective investment in weapons and financial support to the rebels, in an effort to help them win and finally end the conflict. Others worry humanitarian aid will only prolong the conflict, by turning refugee camps into rest and recuperation stations for rebels.

A brother and sister at a food distribution (by WFP and the Syrian Arab Red Crescent) in Qazhal town, northwest of Homs City, in Syria 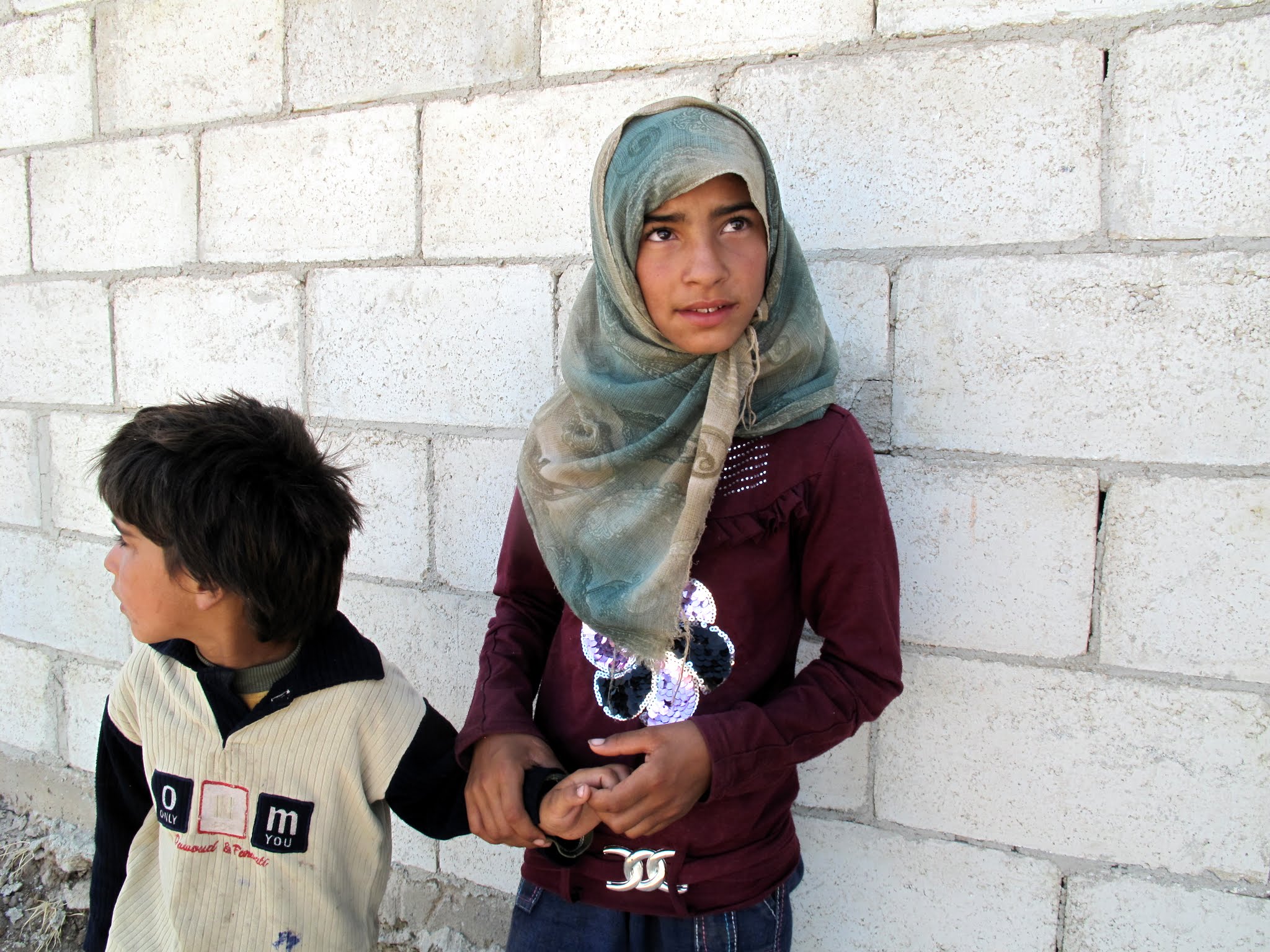 Part of the problem, said Claude Bruderlein, director of the Program on Humanitarian Policy and Conflict Research at Harvard University, was the original inclusion of humanitarian access in international envoy Kofi Annan’s initial six-point plan for the resolution of the conflict. That move integrated political reconciliation and humanitarian aid - not only at an operational level, as has been done in Somalia and Afghanistan - but at the strategic level, “where humanitarian relief is seen as a way to bring an end to the conflict. This principle goes against neutrality… Funding is therefore contingent on the prospective of political solutions to the crisis, which is grim… When there is no political improvement, humanitarian assistance suffers.”

“I think the polarization of the political context in Syria - where you have a very clear divide in terms of political support for one side or the other, globally, by many who would traditionally be donors in this situation - is undoubtedly having an impact,” said Valerie Amos, emergency relief coordinator and UN under-secretary-general for humanitarian affairs.

The Saudi Relief Committees and Campaigns says the $145 million raised in a Ramadan telethon are ready to be allocated inside Syria, but “I cannot find a single international humanitarian organization that can guarantee to me that it can provide help to families in need,” said executive manager Mubarak Saeed Al-Baker.

“Unfortunately, the [Syrian] government has politicized the UN agencies working inside Syria. The Syrian Arab Red Crescent is also politicized… The Syrian regime started dictating to the UN who to deal with. We are facing a unique humanitarian case where the regime is fighting its own people and directing aid to whoever it wants.”

The Organization of Islamic Co-operation prefers to send aid only when it can open an office inside Syria - an idea the government has refused, and is unlikely to warm to after Syria’s expulsion from the OIC in August.

“The problem is access,” one Western donor said. “[The UN’s] definition of access is different than the definition of the donors. We need more reporting: Not just, `We distributed aid here or there’, but: Are we sure the aid is really reaching the most vulnerable? Are we financing the government or the Free Syrian Army? … Where is the accountability? Where is the impartiality of aid?... Don’t give me lists of beneficiaries. Just give me details.”

Others have raised questions about the “local partners” that are cited but not identified by many aid agencies.

But for one Western aid worker, this is a front: "In my view, there is a total lack of political will on funding. They are just waiting for Assad to fall… Donors are using access as an excuse."

IRIN asked Amos if the humanitarian community could be doing more to provide better information to the donors. “I think it’s absolutely appropriate that our donors ask us to be accountable for what we are doing. We, of course, will do our best to do that,” she answered. “But … the environment in which we are working is not straight-forward… You have a number of countries that are saying to us that they want additional information. These are countries that do not even themselves have representatives in Syria because of their concerns about the security situation.”

"There is basically no explanation other than hypocrisy…the outpouring of ostentatious sympathy for the Syrian people's plight should prompt equally pressing action on the ground. But the fact is that our governments satisfy themselves with empty statements and insincere pledges."

“It’s a vicious circle,” says Juliano Fiori, humanitarian affairs adviser with Save the Children in London. “Donors are saying, ‘We need better information,’ and agencies on the ground are saying, ‘We need money to get you better information.’ Donors are then saying, ‘We need information to get you the money,’ and you‘re back at square one… It is plausible that the growing drive for accountability, transparency and value for money is making donors too risk-averse… They may feel that if there is no progress on the political side and they also unintentionally aggravate the conflict through supporting the humanitarian response in the wrong way, then they’re really in the firing line.”

Johannes Luchner, head of the Middle East Unit at the European Commission’s humanitarian aid arm (ECHO), says his department has turned down some proposals for funding because of a lack of faith in the control processes.

“Humanitarian aid is never risk-free. The underlying principle for all of us is the humanitarian imperative, but what we need is reasonable assurance that the goods go where they need to go because otherwise you could be doing harm. When we don’t get it, we don’t finance.”

Observers say donors may also have underestimated the conflict at first: no one thought it would last as long as it did. Some countries are now finding it hard to keep up with the speed at which realities on the ground are changing.

“The situation is unfolding very quickly, changing very quickly,” says Khodynskaya-Golenishcheva, the Russian diplomat. “Countries need some time to consider what more they can do.”

The Regional Response Plan for refugees, initially presented in March, appealed for $84 million. It was revised in June to $193 million and is now being revised once more with a new figure to be presented at the end of this month.

The plan to respond to needs within Syria was initially presented at a cost of $180 million, before being updated this month to $348 million.

“The clear statement from the international community [to the public] that this is a humanitarian crisis came a bit late,” says ECHO’s Luchner.

Weary of the more than 600,000 registered Iraqi and Palestinian refugees in Syria it was trying to protect, the humanitarian community inside Syria had to be careful about its messaging. In addition, the first few months were correctly labelled as a human rights crisis above all else.

Still, ECHO decided as early as February, before the first UN appeal and before the violence accelerated exponentially, to put aside money for the crisis. In total, the European Union’s different arms and Member States have financed more than 200 million euros, while the US has given more than $100 million.

But for Peter Harling, analyst with the International Crisis Group, none of these explanations hold true.

“There is basically no explanation other than hypocrisy. The needs are huge in Syria and there is no doubt that a humanitarian crisis will provoke further radicalization and collapse of this fragile society. An expansive indigenous civil society has developed and matured, which there is every reason to support; and the outpouring of ostentatious sympathy for the Syrian people's plight should prompt equally pressing action on the ground. But the fact is that our governments satisfy themselves with empty statements and insincere pledges.”