The UN Security Council is expected to renew the mandate of the world body’s peacekeeping mission in the Democratic Republic of Congo during discussions later this month in New York.

But as the mission – known by its French acronym MONUSCO – makes plans to draw down and eventually exit the country, discussions on its future must be informed by the needs of Congolese civilians and civil society groups on the ground.

The Security Council’s upcoming discussions – which include a separate briefing today on MONUSCO and the broader situation in Congo – will be informed by a newly released transition plan that maps out the mission’s phased withdrawal from Congo.

Developed by the mission and the Congolese government, the plan includes detailed benchmarks designed to ensure the drawdown is contingent on improvements in the security situation, and on the capacity of the state to properly protect civilians.

The effort to link the mission’s drawdown to concrete benchmarks on security and the protection of civilians is a positive step. Past research that we have conducted at the Center for Civilians in Conflict (CIVIC) has similarly highlighted the importance of ensuring that changes in the mission’s posture, such as base closures, are based on concrete analyses of protection threats.

But achieving the 18 benchmarks and associated indicators detailed in the transition plan would mean a radically different future for civilians in eastern Congo. And in the context of widespread armed group violence and political instability, such a future feels a long way off.

The UN and the peacekeeping enterprise are also largely state-driven endeavours, subject to political dynamics around Security Council negotiations that risk excluding Congolese voices, without whom the transition process cannot succeed.

A lot is at stake: A botched transition could further destabilise the region, where communities already contend with weak or non-existent government institutions and frequent human rights violations by state and non-state forces alike.

One of the UN’s longest-running peacekeeping operations, MONUSCO, and its predecessor mission (MONUC), have operated in Congo since 1999, a life span that speaks to the persistence and gravity of the threats to civilians.

The transition plan sets “minimum conditions” for the mission’s eventual withdrawal, including benchmarks that require a significant reduction in threats from armed groups, and greater capacity of state security forces to quickly respond to protection threats and improve internal coordination. 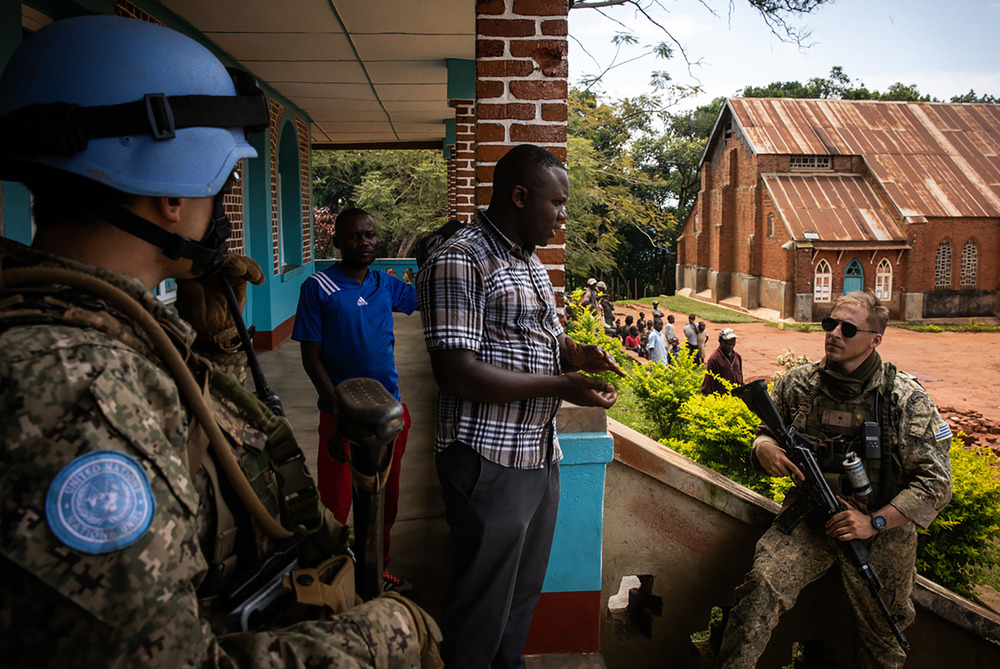 Hugh Kinsella Cunningham/CIVIC
UN peacekeepers interact with a priest from a displacement site for civilians fleeing the conflict in Congo’s Ituri province, in November 2021.

The transition plan does not include a fixed timeline for MONUSCO’s exit, and the timeframes for the achievement of individual benchmarks – ranging from 2022 to 2024 – may well slip, given important risk factors, for example, presidential elections in 2023.

In a challenging and unpredictable context, it is vital that conditions on the ground drive the mission’s drawdown, as is stressed in MONUSCO’s mandate and in important strategic documents, such as the 2019 Independent Strategic Review.

This year alone, more than a million people have been displaced in Congo, while some 27 million residents are currently highly food insecure – one of the largest food crises in the world according to the World Food Programme.

This month’s Security Council deliberations come as the government has once again extended martial law – also known as the “State of Siege” or “Etat de siège” – in two of the country’s most conflict-affected eastern provinces – North Kivu and Ituri.

The measure – which has seen military and police figures replace civilian officials in governing the provinces – was imposed in May but hasn’t resulted in a meaningful reduction in threats against civilians, while giving rise to significant human rights concerns. For example, Congolese civilians and military officials that our organisation interviewed recently in North Kivu’s Beni region, highlighted increased armed robbery, extortion, and illegal taxation by Congolese soldiers.

The case of Tanganyika

As part of its phased exit, MONUSCO plans to withdraw next year from Tanganyika, a southeastern province that has seen some improvement in its security context in recent years.

​​A premature withdrawal that fails to sustain protection efforts or consider the perspectives of civilians and humanitarians could have profound consequences in the province, including the erasure of progress related to stability and humanitarian access.

“For most actors working on the ground, they are really worried. They are asking: What will happen when MONUSCO has left?”

A civil society leader in Tanganyika described MONUSCO’s departure to us as a “major concern”, highlighting the importance of the mission’s provision of security information, escorts of humanitarians, and dialogue efforts with armed actors.

“For most actors working on the ground, they are really worried,” the leader said. “They are asking: What will happen when MONUSCO has left? What will we have to do to fill in the gaps caused by the mission’s departure?”

MONUSCO and the Security Council must recognise that the mission’s transition is not linear, and they should be prepared to change course when the conditions for civilians call for it.

Effectively involving civilians and civil society groups in assessments of the security situation can help provide an accurate view of whether key transition benchmarks have or haven't been reached.

As the Tanganyika-based local leader explained: “[Civil society organisations are] based everywhere in the province. Whenever there is a security incident, they monitor and alert just as it happens, even in the most isolated areas.”

Civil society assessments in some instances differ markedly from official narratives. Community leaders interviewed by CIVIC in Beni suggested that – in contrast to government assertions that martial law has been effective – security for civilians has continued to deteriorate.

“Despite the state of siege, insecurity has grown on all the main roads,” one civil society leader in Beni told us.

Civilians and civil society groups also have the tools to solve protection challenges and reduce security threats in a way that can benefit MONUSCO’s transition if properly recognised and supported.

“Despite the state of siege, insecurity has grown on all the main roads.”

Early warning networks, community-protection plans, and dialogues between local residents, armed groups, and security forces all have an important role to play in reducing and responding to violence.

The transition plan and the conditions it outlines for MONUSCO’s gradual drawdown from Congo can help focus attention on improving the dire conditions of civilians caught in conflict.

Therefore, the Security Council should endorse and support the implementation of the plan and ensure that MONUSCO and the Congolese government are held accountable for reaching benchmarks on the protection of civilians.

And, critically, the Security Council should recognise that the success of the transition – from implementation to monitoring – requires the meaningful inclusion of Congolese civilians and civil society.