Part 4 in a multi-part series examining how Rwandans and the humanitarian community have moved on since the genocide that killed nearly one million people a quarter century ago.
Read part 1, part 2 and part 3
RWERU, Rwanda

For Tutsis who survived the Rwanda genocide or watched as their loved ones were slaughtered or raped, reconciling with the Hutu attackers once seemed unimaginable.

Today, however, reconciliation has become a reality.

This year, Rwanda marks the 25th anniversary of the genocide, and last month the start of a 100-day reflection period began, commemorating the lives of nearly one million people killed – many by their friends and neighbours. The majority of those killed were Tutsis and moderate Hutus.

Since then, Rwanda has pushed forward with programmes aimed at healing wounds and bridging divisions: Hutus and Tutsis now participate in mandatory community service programmes each month; School children are taught to identify as “Rwandan” rather than along ethnic lines; and, perhaps more surprisingly, hundreds of Hutu and Tutsi families now live side by side in “reconciliation villages” which they have built together and work together to maintain.

Many are in the villages because of Prison Fellowship Rwanda – an Anglican organisation working with the National Unity and Reconciliation Commission. The NGO supplies the materials that the victims and perpetrators use to build their homes.

Fidele Ndayisaba, executive secretary of the reconciliation commission, said the villages give people not only a home but also a chance to rebuild their lives.

The targeting of Tutsis began long before the genocide in 1994.

Political power was historically held by a Tutsi monarchy. Belgian colonial rule entrenched divisions between the largely Tutsi cattle- and wealth-owning elite and poorer Hutu farmers. Resentment led to repeated bouts of anti-Tutsi violence even before independence in 1962. In the years leading up to 1994 there were mass killings and forcible relocations.

“I vividly remember how it unfolded, and how people were butchered.”

Louise Uwamungu’s family was one of those forced to move to Rwanda’s Bugesera District, near the border with Burundi. Although they built a life in the new area and began raising a family, their nightmares returned in 1994.

Within days of the genocide starting, Uwamungu’s parents were slaughtered. So were five other members of her family, including her older sister. Among the killers was Cyprien Matabaro, who was later charged with committing genocide and sentenced to 15 years in prison.

“I vividly remember how it unfolded, and how people were butchered. I saw my sister being hit with an axe. She died instantly. We hid in a marshland,” said Uwamungu, who spent months hiding in swamps before fleeing to Burundi for safety. 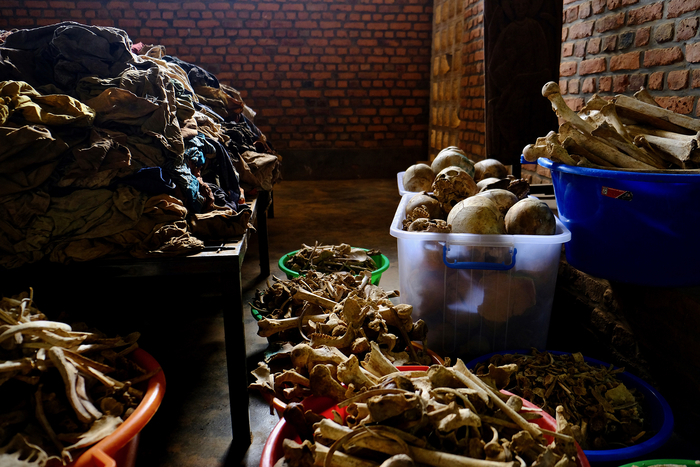 Joost Bastmeijer/TNH
A church in the Nyamata Parish that became a killing ground for approximately 2,000 people is now a memorial site. Clothing of the victims are still piled up on the benches and plastic buckets hold the remains of the deceased.

Today, the 42-year-old mother of six lives next to Matabaro in the Rweru reconciliation village, built in 2003 about 44 kilometres east of the capital, Kigali.

Her journey towards reconciliation began in 2005 when Prison Fellowship Rwanda sought to unite and reconcile Rwandans. The programme started after the government released perpetrators who admitted to their crimes in the semi-traditional Gacaca courts.

After Matabaro confessed to his involvement in the genocide, the programme helped Uwamungu meet him and three others who played a role in killing her family members.

The two now live in the village with 100 other families – all with similar stories. Their families and children also know one another and live together peacefully. Sometimes they share meals or do work projects together to sustain life in the village.

Matabaro is frank about his involvement in the massacres.

“I met a kid – Uwamungu’s relative – and hit him twice with my machete. He died on the spot,” said Mataboro, a father of six. “I personally killed many people including Uwamungu’s relatives at the supervision of our former sector leader. It was a campaign to make sure all the Tutsi were exterminated.”

Matabaro was arrested and imprisoned in 1998. While incarcerated, he was approached by members of the fellowship programme. Shortly after that meeting, he apologised to Uwamungu and agreed to live in the village.

“She forgave me,” he said. “For now we are good neighbours and we share everything including food and drinks. We support each other in daily activities.” 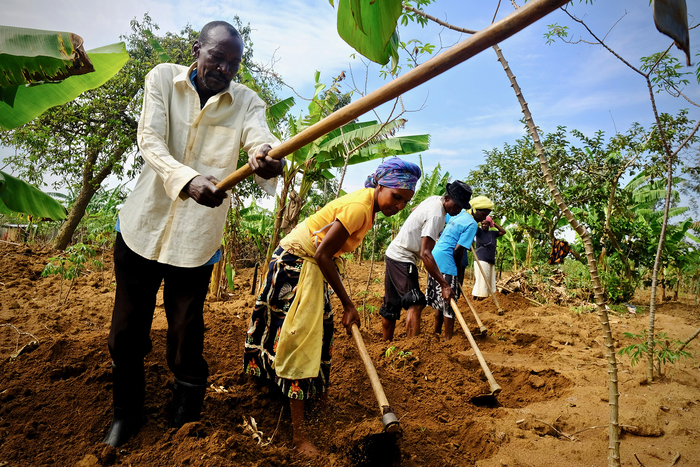 Joost Bastmeijer/TNH
Jacqueline and Mathias work the land. Every month, community members gather for ‘Umuganda’, where they contribute to national development and reconciliation. Officially, every Rwandan between the ages of 18 and 65 has to attend this ‘Community Work Day’.

Near the southeastern town of Nyamata, survivors and perpetrators also live together in another reconciliation village called Mbyo.

Like Uwamungu, the memories of the genocide have not faded.

“I left the village to collect milk from the cows,” said Mukamana. “When I came back, I found my brothers and sisters killed. Some were in the church, others at home. I lost 12 family members in total. My aunt – who is disabled because of the genocide – my uncle, and me are the only survivors of my family.”

Mbyo villagers, including Mukamana and Sendegeya, regularly gather for a traditional practice called Umuganda in which they work together on special community projects. One recent project was weeding and seeding Mukamana’s land.

All those between 18 and 65 must take part in these monthly community projects, which were reintroduced by President Paul Kagame, who came to power after the genocide.

“I still miss my family members every day, but they will never come back. My neighbours are my family now.”

“The previous government told us to chase and kill the Tutsis,” said Sendegeya. “They said they were the enemy and gave us firearms and machetes. At first it was a government order, but when we started [with the killings], we had some personal benefits. We would take all their belongings, like cows.”

Sendegeya said he murdered six people. “All of them were members of Jackie’s (Mukamana’s) family.”

One of those killed was the pastor of his church, Etienne Gahigi, who was Mukamana’s brother.

But now, in Mbyo, Mukamana said there is no kind of tribalism in their community anymore.

“In the dance club, where Mbyo’s young people go to, everybody is Rwandese. We are now one community, we help each other. I still miss my family members every day, but they will never come back. My neighbours are my family now.”

“It was hard to face people who killed my relatives, and wanted to revenge,” Uwamungu said. “I never thought of living with genocide perpetrators safely.”

It was only after time that she began working on forgiveness.

It hasn’t panned out that way for others, largely because many perpetrators have yet to confess their crimes or apologise for them.

“Twenty five years later, some people have yet to come forward and talk,” said George Rwigamba, the commissioner general of Rwanda’s prison service.

Of the 27,000 perpetrators who were convicted of atrocities, fewer than one in four have showed remorse or showed a willingness to apologise for their roles in the genocide, he said.

That has made it difficult for some to move on.

“If I said I forgave those who killed my relatives, I would be lying,” said one genocide survivor living in Kigali who asked not to be named because of the sensitivity of the issue. “I think it is a long journey and I am living my own life. I am yet to see any reason they can be forgiven.”

For Uwamungu, the journey has been worth it.

“After we had reconciled, we are now friends and relatives,” she said. “We share everything; he visits my family and I visit his as well. Our children now understand what happened... before, (reconciliation) would have been a daydream.”

(TOP PHOTO: “We were neighbours before, and we are neighbours again,” says Jacqueline. “Every day, he has to see me and I have to see him. If there had been any quarrels between him and me, he couldn’t help me on the land today. I wouldn’t let him.”)

Read more from this series