Part 1 in a multi-part series examining how Rwandans and the humanitarian community have moved on since the genocide that killed nearly one million people a quarter century ago.
Read part 2, part 3, and part 4
KIGALI, Rwanda

On Sunday Rwanda is marking the 25th anniversary of the genocide, commemorating the lives of nearly one million people, mostly Tutsis, slaughtered in less than four months.

Amahoro Stadium – the complex that once provided sanctuary to 12,000 people fleeing the violence in 1994 – is again the site of the main annual remembrance ceremony here in Kigali.

As in past years, organisers expect that dozens of people who are overcome with emotion will be carried out of the stadium, as performances and readings marking the genocide trigger traumatic memories for some of the 30,000 people expected to attend.

And as with previous years’ ceremonies, it’s likely that at least some of those who break down will have been born long after the atrocities took place.

Nearly 20 percent of the dozens of attendees removed from the commemoration day events at the stadium in 2017 were born after the genocide, Yvonne Kayiteshonga, the national director of the government’s mental health division, said. “The mood, the evocation when entering – one can feel traumatised,” she added. A particularly evocative performance at one past ceremony  included artists briefly collapsing as if they were the corpses of those who had been killed.

Members of Rwanda’s post-genocide generation have inherited a legacy of trauma that, a quarter century after events they never experienced, is leaving an estimated hundreds of thousands with undiagnosed symptoms such as anxiety, depression, and self-destructive behaviour, says Vincent Sezibera, a psychologist at the University of Rwanda and director of the Centre for Mental Health.

Despite the shared trauma, government statistics indicate that few people will seek help; in the country of some 12.2 million, only some five percent seek mental health services. That, psychologists say, can lead to the possibility that the children of the post-genocide generation will be affected and fuel an array of potential knock-on effects such poverty, social exclusion, and family conflict.

Theodette Umutoni has struggled to share her story with her three children. She said she was raped by several men during the genocide and contracted HIV. Her own healing, she added, has been slow as she has struggled to make ends meet for her family. “Healing is a long process,” the 48-year-old said. “It took me a long time to find peace.”

Her son, Theophile, has also struggled to reconcile his mother’s pain of the genocide. Someday, he said, he hopes to express his feelings by becoming a painter.

Sezibera explained that “intergenerational trauma is possible either through transmission from parent to offspring or if it is embedded in a story of historical violence.” While genocide-related trauma may be secondary, the trauma felt can be equally terrifying, he said. 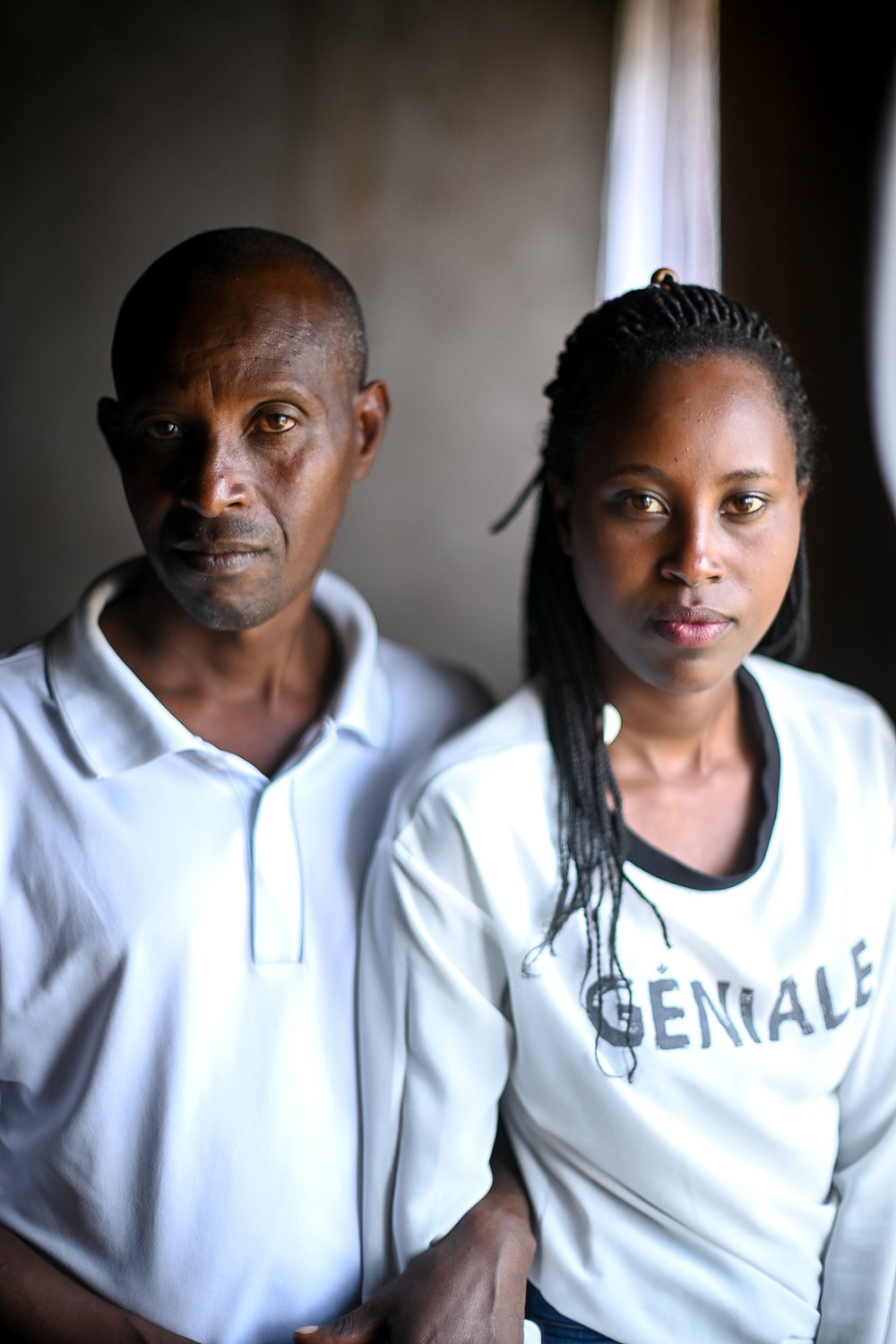 Maggie Andresen/TNH
Nishimwe Aliane and her father, Hakizimana Evaliste, whose family was killed in the genocide. Aliane, 20, is learning to work through the trauma she has inherited.

Nishimwe Aliane was born in 1999, the child of two genocide survivors. She remembers how her father, Hakizimana Evaliste, who was the sole survivor in his family, struggled with his emotions and refused to speak to her about his experiences until she reached adulthood.

She often felt that she was the buffer between her father’s trauma and the awareness of her five younger siblings, she recalled, sometimes warning them to leave Daddy alone because he had a “headache”.

“My father used to return home very bitter coming from the commemoration events,” Aliane remembered. “We all felt sad seeing him like that.”

Evaliste has told Aliane that she has the qualities of his late father and sisters — bittersweet words forcing the recognition that her father’s family will never be part of her marriage celebrations, as is customary and celebrated in Rwandan culture.

“All of this breaks my heart,” Aliane said.

The 20-year-old now works as a peace agent in her village near lake Kivu in western Rwanda, where she has been trained to recognise signs of trauma and mediate conversations about healing as part of Never Again Rwanda, a social justice organisation that teaches Rwandan youth to become peacebuilders.

Aliane has suffered from depression through her father’s trauma. She says she seeks out peers rather than counsellors to help when she’s feeling down. Peer networks provide solace for a generation of Rwandans who cannot relate to the direct trauma of the genocide, according to Aliane and organizers at Never Again Rwanda.

Umutesi Leah, born in 1997, also seeks comfort in other children of survivors. She says that being around other young people with a similar family history can feel less lonely, although it becomes more difficult during commemoration season.

“It gets worse mostly during the commemoration period when I hear other people planning to visit their grandmas,” Leah remarked. “Then I immediately remember that mine was killed during the genocide.”

An additional strain for young people whose families include survivors has been reconciling with peers whose parents or family members may have been tried or jailed for atrocities.

"In the past, I used to feel angry with other children from the Hutu ethnic group because I saw them all as my enemies," said Aliane, who is Tutsi. "Yet I understand now that their parents are the ones who did wrong." 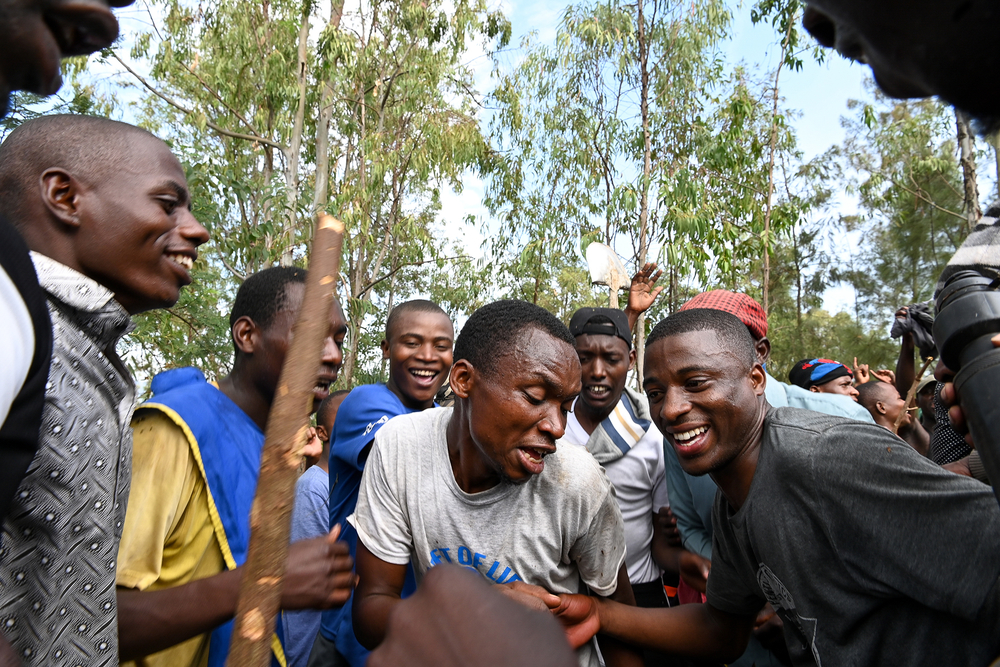 Maggie Andresen/TNH
To bring people together after the genocide, Rwanda encourages the practice of “umuganda,” in which people band together to achieve a goal. The practice is celebrated one Saturday each month.

The violence in Rwanda, which began shortly after then-President Juvénal Habyarimana’s plane was shot down on April 6, 1994, is widely regarded as one of the worst atrocities of the 20th century. The Hutu leader’s assassination was followed by coordinated government attacks against Tutsis and politically moderate Hutus,  leading to the slaughter of an estimated 70 percent of Rwanda’s Tutsi population.

Decades later, health professionals in Rwanda have found that actions, words, economic insecurity, and family conflict can all act as a pathway for inherited trauma. A lack of words and communication can also prompt children to embellish their own versions of the genocide, Sezibera said.

Narratives of the genocide are not only shared among families, they are also embedded within the framework of Rwandan society. The continuous discovery of mass graves – about 40 were discovered in Kigali last year – for example, keeps the narrative active instead of reflective.

“You may hear children say that the attackers ‘beat us or killed us’ even if the children were not there,” said Adelite Mukamana, manager of the psychotherapy and healing unit at Never Again Rwanda. 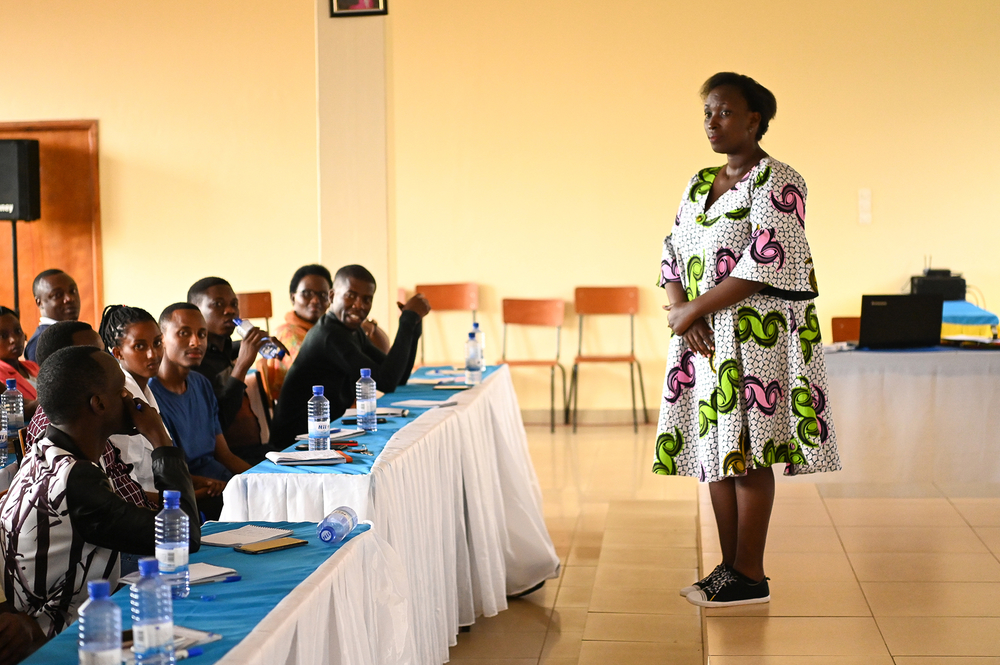 Mukamana, herself a genocide survivor, used to work for the community tribunal courts that tried Rwanda’s genocide perpetrators. She now oversees a team of five psychotherapists and 64 community members trained to identify symptoms of trauma and lead people to medical help, sometimes by visiting people in their homes and talking to them about their experiences.

During her work in the courts, she witnessed how trauma was often reactivated for survivors who were made to listen to the testimony of genocide perpetrators, sometimes detailing how people were killed and where they were buried.

“It somehow creates that mourning – pathological mourning,” Mukamana said, recalling how she had watched and listened to the reactions of people in the courts who had learned the fate of their family members or the brutal details of what happened before they died.

Mukamana says that the treatment for those suffering from secondary trauma is the same as for those who experienced events first-hand.

“We treat the suffering, not the cause,” Mukamana stressed. “It’s not a question of saying, ‘No, you were not here, why are you showing those symptoms?’ ”

And residual trauma remains for many survivors and their offspring, despite the country’s economic and social recovery on many fronts. Some who have suffered may continue to suffer in silence, even while maintaining the perception that things are well on the surface. 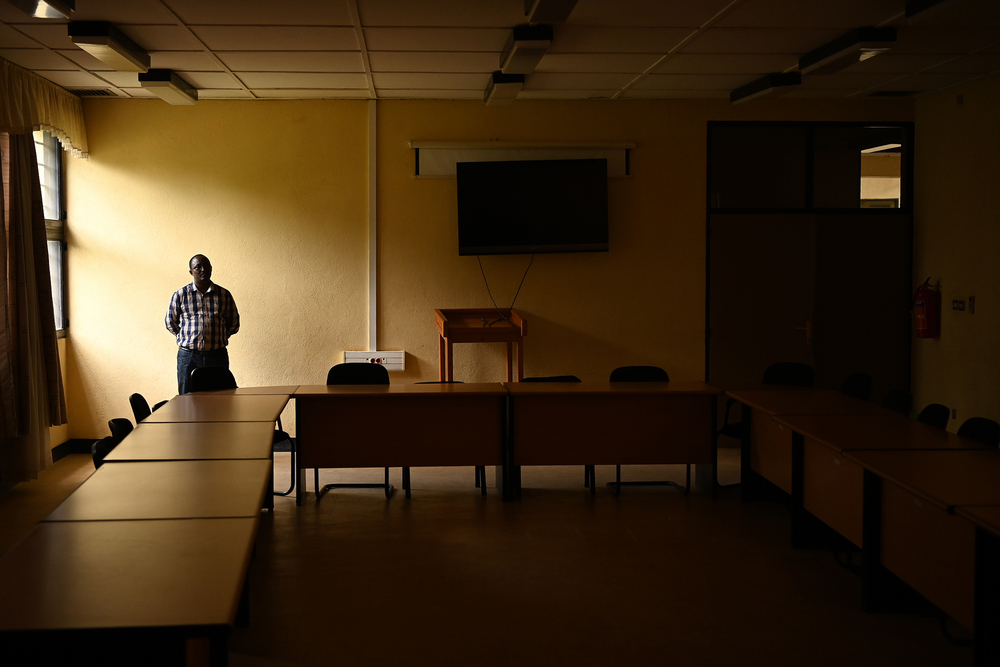 Maggie Andresen/TNH
Vincent Sezibera is a clinical psychologist at the University of Rwanda and director of the Center for Mental Health.“Yes, we were wounded by the genocide and genocide ideology, but we don’t give up.”

Listen to Vincent Sezibera on moving forward from historical violence.

Rwanda offers health insurance that includes mental health coverage even for the poorest, but government figures indicate that only a fraction seek medical help, according to Kayetishonga. Additionally, although only 3.6 percent of the general population have received diagnoses of post-traumatic stress disorder, it is seen in one-third of genocide survivors, Kayetishonga said.

The cultural stigma around mental health issues has been somewhat reduced in recent years. “People used to consider mental health sickness only psychosis,” Sezibera noted, adding that community health campaigns have tried to ease social stigma and increase education. Yet a belief remains in some communities that sickness is exhibited only in physical symptoms. Many people still seek traditional healers or religious counsellors before seeking mental health services.

This year, organisers of the 7 April commemoration event here in Kigali have arranged for hundreds of volunteers to be on site to care for traumatised audience members. Professionals from the Rwandan Red Cross, nurses, psychologists, psychotherapists, and doctors will be on hand. Members of local survivor organisations who are trained in self-care and PTSD support will also be present. Local commemoration ceremonies outside of Kigali will likewise be bolstered with professional support.

Kayiteshonga confirmed that while most people experiencing episodic trauma will be treated on site, severe cases will be transferred to nearby clinics. She added that her team will collect data from those who experience trauma at the ceremony to help inform plans for future trauma response.

For Sezibera, the psychologist and director of the Centre for Mental Health, a Rwandan proverb underpins the resilience of the country and of those living with trauma: “A hero’s wound doesn’t hinder his dancing.”

*Additional reporting by Seif Kousmate, a photographer based in Morocco and covering social issues in Africa.

(TOP ILLUSTRATION: Illustration based on a photograph by Atulinda Images of Kwibuka20, the 2014 commemoration of the Genocide against the Tutsi in Rwanda.)