At a glance: Iraq’s stalled recovery

Two years after Iraq declared victory against so-called Islamic State in the extremist group’s stronghold of Mosul, much of the northern city – and the country – has not been rebuilt, and millions of Iraqis still depend on aid.

The July 2017 recapture of Mosul – from where IS leader Abu Bakr al-Baghdadi proclaimed a new “caliphate” – was a key turning point in the conflict and a symbolic milestone for Iraq, which had been fighting the group since its first territorial gains in the country in early 2014.

Talk of a more hopeful future for millions of Iraqis was almost immediate. Today, though, large parts of Mosul still lie in ruins and 300,000 people from the district are unable to return to their homes. The city’s former governor is on the run, accused of embezzling $64 million of public funds, including $40 million intended for reconstruction.

But Mosul – the largest Sunni majority city in Iraq, with nearly two million residents prior to the mass exodus that accompanied the IS takeover – is far from the only part of the country struggling to bounce back.

Across Iraq, the pace of returns has slowed. A total of 1.6 million people remain displaced, and obstacles like a shortage of work, damaged or destroyed homes, and a lack of safety mean they may not be able to return anytime soon.

Multiple wars and uneven reconstruction efforts in Iraq over the past decades helped to create the conditions that allowed IS to prosper. The slow pace of this rebuild, coupled with the lack of countrywide reconciliation efforts, is only likely to exacerbate long-held sectarian tensions and citizens’ frustrations with the government.

This briefing looks at the country’s growing humanitarian needs and the future for Iraq’s 37 million people.

How many Iraqis need help?

The UN says 6.7 million people in Iraq need some sort of humanitarian assistance in 2019. They include: 1.6 million displaced Iraqis; host communities with stretched resources; an estimated 250,000 Syrian refugees; and around four million people who have returned home – in many cases only to find they no longer have homes, jobs, or public services.

At the start of the war against IS, when millions of desperate people were taking flight, the aid response was focused on emergency food and shelter.

Today, while many people still need this sort of help, the humanitarian community has shifted its attention towards what it calls “protection”, including concerns about coerced or blocked returns, dealing with IEDs and unexploded ordnance, and tackling the fact that many Iraqis who lived under IS lack basic documentation like ID cards or birth certificates.

Where do the displaced live?

The majority of Iraq’s displaced people do not live in camps. Most are staying with family or friends, in rented accommodation, or in makeshift shelters.

Hilary Stauffer, head of reporting, policy, and strategy in Iraq for the UN’s emergency aid coordination body, OCHA, said displaced people who do not live in camps “may not be served by aid at all, or only infrequently, [as] aid agencies reduce their footprint in Iraq”.

Stauffer added that these people have to get by in other ways: through casual labour, relying on the generosity of host communities, or through what the aid world calls “negative coping strategies”, like reducing the number of meals a family eats in a day.

For the 500,000 people who remain in camps, the structures set up to support them are rapidly aging. Tents meant to last six months have been in use for years. Fire- and water-proofing on many of them has begun to deteriorate, leaving people exposed to the elements.

Heavy rain last November and December flooded some camps in the north, forcing thousands of people to temporarily evacuate, only to return to damp and damaged tents. In a March update, OCHA said 89,650 people in the camps that flooded last year, Qayyarah and Jeddah 1-6, were still living in old tents issued in 2016. Some 23,150 tents were needed to replace the old ones, a process OCHA’s Stauffer said is ongoing.

The tents are just one example of how needs have shifted as Iraq tries to rebuild. Across the country, aid agencies are filling in the gaps of a healthcare system that was already stretched by brain drain and hard hit by conflict. Iraqis with medical training have been leaving the country at least since the US-led invasion in 2003, if not before.

In a city like Mosul, aid workers have pivoted from treating injuries from unexploded ordnance and collapsed buildings to dealing with the healthcare needs that any population has: obstetrics and gynaecology, emergency medicine, paediatrics, and chronic conditions like diabetes and high blood pressure.

“There are day-to-day needs that are unmet because the destruction of the healthcare system is so severe,” said Karel Hendricks, head of mission in Iraq for the medical charity Médecins Sans Frontières. “This severely impacts the capacity to cope with the needs of citizens, both [those] returning and those who stayed behind.”

Hendricks said one glaring need “very much related to the conflict” is mental healthcare.

The reasons people aren’t going home, or are going home and then leaving again, are varied.

Families with real or perceived ties to IS are often unable to get security clearance without renouncing their relatives or securing the intervention of a local leader to facilitate some sort of reconciliation. This process is scattershot, and some people say even if they get permission from authorities to go back, they fear retaliatory violence.

Tom Peyre-Costa, spokesman for the Norweigan Refugee Council In Iraq, says going home has now become hard for everyone still displaced. “There are just so many barriers to returns right now that even though it is difficult [for those considered to be affiliated with IS], the non-affiliated people don’t have much more chance to return right now either.”

The first line of the UN’s 2018 humanitarian response plan for Iraq reads, in bold-faced type: “The majority of displaced families are expected to return to their communities by the end of the year.”

This statement, published at a time when 1.5 million Iraqis were still away from their homes – some 100,000 fewer than today – proved overly optimistic. Throughout 2018, rates of return across the country slowed.

In a recent survey conducted by REACH, an organisation that compiles humanitarian data, only two percent of people in formal camps across Iraq said they intended to go home in the next three months. That number only increased to five percent when the time period was extended to a year.

The top reasons listed for not returning were: damaged or destroyed homes; insufficient financial means to go back; a lack of security forces in their home area; not enough job opportunities; and the perceived presence of mines.

In some parts of the country, a lack of community cohesion is also an issue.

Some minority Yazidis may be afraid to return to their historical homeland of Sinjar, where many were kidnapped or killed by IS in what a UN commission called genocide. In other areas that were once mixed Sunni and Yazidi – now guarded by Yazidi militias – Sunni residents are worried they will be blamed for the atrocities of IS and are afraid, or forbidden, to go home. 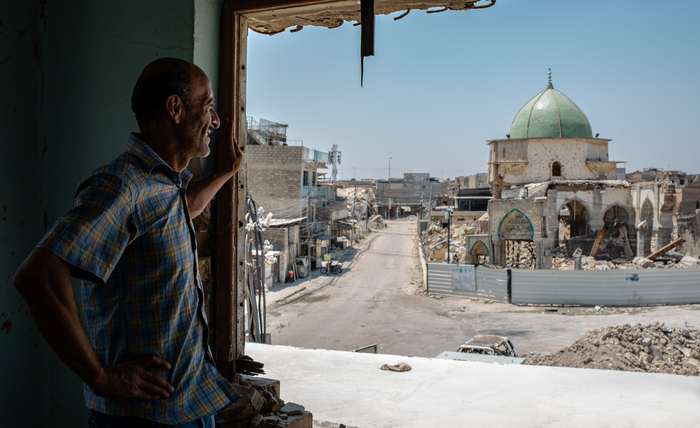 Tom Peyre-Costa/NRC
From his destroyed home, a resident of Mosul’s Old City looks out at al-Nuri mosque, where so-called Islamic State declared its “caliphate.”

How is the rebuild going?

Many Iraqis – those not ready to return, those who have done so, and those who never left – are dismayed by the lack of repairs and the slow rebuild, with homes still lying destroyed and civilian infrastructure severely lacking.

In Mosul alone, the Norweigian Refugee Council estimates that 138,000 houses were damaged or destroyed during the conflict. In the western part of the city, which saw some of the most intense fighting, a statement from the group said “there are still more than 53,000 houses flattened and thousands more damaged”.

The destruction extends far beyond Mosul.

In Fallujah, which sustained extensive damage during the 2016 operation to retake it from IS, a recent REACH assessment found that the “stabilisation of the city is well underway”. However, 98 percent of people surveyed (almost all of whom were returnees) said they had received no humanitarian assistance in the past six months, and 80 percent said they were in debt – the majority reporting that this was due to the costs of repairing and maintaining their homes. There was not enough work to go around, and water provision and healthcare were both reported to be below pre-IS levels.

Even in some places that did not see conflict, like the southern city of Basra, public services are not always sufficient. As detailed in a Human Rights Watch report released 22 July, the city’s unsafe drinking water sent at least 118,000 people to hospital last year alone, and contributed to mass protests.

This is despite the fact that almost immediately after the announcement of defeat against IS, Iraqi officials were looking for investment and talking about reconstruction at a donor conference in Kuwait.

This year, critics knocked Iraq’s $112 million budget for allocating very little for reconstruction, and while people whose homes were damaged or destroyed by IS – or during the fight against the group – are eligible to apply for government compensation, the process is time-consuming, bureaucratic, and costly. It is not clear how many people have received significant payouts.

Many people who have returned to cities like Mosul, Ramadi, and Fallujah, are rebuilding their homes and business without much help at all.

Reconstruction is not just about buildings, MSF’s Hendricks points out, advocating for the international community to put more resources towards mental healthcare.

“I think, in terms of the dividends, [better mental healthcare] would pay for reconstruction, reconciliation between communities, and Iraq’s general chance to function as a society again  – its importance can hardly be overstated.”

Iraq may soon have a new influx of displaced nationals who need help. They are coming from al-Hol camp in northeast Syria, which saw its population swell from 68,000 to 73,000 earlier this year due to the arrival of tens of thousands of people fleeing the last IS territory in the country.

According to OCHA’s Stauffer, approximately 31,000 people in al-Hol are Iraqi nationals – 84 percent of them women and children – and “most of the Iraqis residing in al-Hol are expected to be repatriated to Iraq”.

A humanitarian source familiar with the expected transfer – who asked not to be named because of the sensitivity of the issue – said the plan to send Iraqis (some of whom were likely in al-Hol before the flood of people from IS territory) back, had been delayed more than once, but was expected to happen any day now.

Stauffer said there had been no official announcement about the date or details of the planned repatriation.

“The government of Iraq has indicated that any returns will be voluntary in nature,” she said. “However, given security concerns from the government, potential antagonism from other Iraqis to the returnees, and the returnees’ significant humanitarian needs, it is anticipated that a majority of this population will reside in camps upon their return.”

On 20 July, Human Rights Watch warned that preparations were being made to confine the new arrivals to Jeddah 5, one of the camps that flooded last year.

“Segregating families – mainly women and children – coming from Syria is a step toward stigmatising and labelling them in the absence of any credible allegation that they have committed a crime.”

For NRC’s Peyre-Costa, reconciliation is key to keeping Iraq on the path to a sustainable future. “People need to be able to return and rebuild,” he said. “But communities must be able to talk to each other as well.”

(TOP PHOTO: A man walks through the Old City of Mosul, which was heavily bombed during the campaign to take back the city from so-called Islamic State.)