When alarming reports of a deadly disease outbreak landed on the desk of Dr. Jean-Jacques Muyembe – the leading virologist in what was then known as Zaire – he sent an employee  from the capital of Kinshasa to Kikwit, a city in the southwestern part of the country.

The lab technician returned with blood and stool samples taken from people with the mystery illness. Back in Kinshasa, tests ruled out common diseases. Muyembe’s team then sent the samples in May 1995 to the Centers for Disease Control and Prevention in the United States, where tests confirmed his suspicion.

Samples taken from the Kikwit outbreak would later end up providing a basis for the V920 vaccine being used in the latest Ebola outbreak in what is now called the Democratic Republic of Congo, and where Muyembe is again working to contain the deadly disease.

The current outbreak – the second largest since 1976 – has already killed at least 1,346 people out of 2,000 reported cases. Although Merck’s V290 vaccine helped stop a separate smaller outbreak in the country’s Equateur province last year, it has so far failed to halt the outbreak in the eastern provinces of North Kivu and Ituri, where attacks against health workers, mistrust, and misinformation have thwarted response efforts.

In the early 2000s, the Public Health Agency of Canada, or PHAC, used the genetic sequence of the Mayinga strain from the outbreak in then-Zaire, to modify a vesicular stomatitis virus – a disease primarily affecting horses and cattle. By chance, they found it immunised mice against Ebola. The vaccine would also eventually prove effective on primates.

In 2010, it sold the licence to develop and commercialise the vaccine to BioProtection Systems Corporation, a subsidiary of a small American company called NewLink Genetics that specialised in cancer treatments.

By the time Ebola surfaced in West Africa in 2013, NewLink had yet to start clinical trials or make much progress in its research even though there had been several other outbreaks.

In 2014, when the first human Ebola case reached US soil – the disease is also found in other animals – the value of NewLink’s stock doubled in just two weeks.

But a month later, reportedly under pressure from the World Health Organisation, NewLink gave an exclusive licence to Merck – which has a track record in vaccine work – passing on much of the responsibility to develop and commercialise the vaccine.

In exchange for the licence, NewLink received payments totalling $50 million and royalties on any future commercial sales. The percentage figure of the royalties is kept secret.

Had the vaccine development by NewLink progressed faster, it “could have been deployed in West Africa during the outbreak and saved lives,” a 2016 report from Médecins Sans Frontières said.

NewLink did not reply to requests from The New Humanitarian for comment over email, phone, or Twitter.

At the beginning of the West African outbreak, Canada’s PHAC – rather than NewLink – provided 800 vials of the vaccine to the WHO in order to begin clinical trials. The Phase III trials to test the effectiveness of the vaccine on a large number of people began only in March 2015, as the epidemic was waning, but provided encouraging results.

Still, even after the licence was sold to Merck, much of the research on the vaccine continued to be funded by the public. For example, the US Biomedical Advanced Research and Development Authority paid Merck $148 million to that end.

The vaccine trial in Guinea also received nearly $4 million from the UK biomedical research charity The Wellcome Trust, and more funding from the British, Norwegian, and Canadian governments. 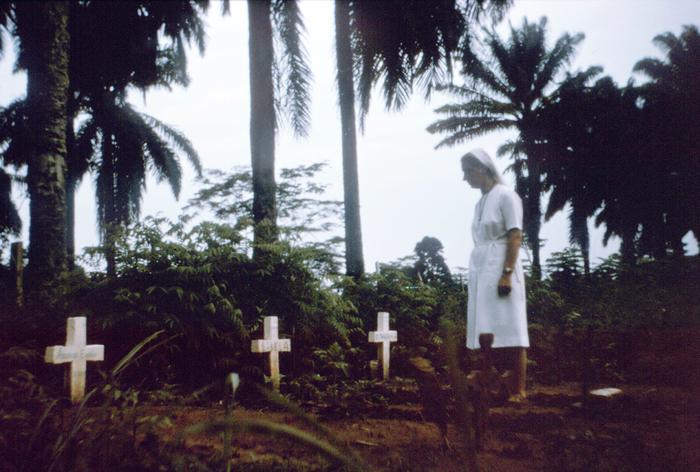 CDC
A nurse walks among the grave sites of her colleagues that died during the 1976 Ebola outbreak in Democratic Republic of Congo.

Merck said, as a matter of policy, it could not disclose the amount it had invested into research on the Ebola vaccine.

In 2016, the company entered into an agreement with global vaccine alliance GAVI to provide 300,000 doses in case of an outbreak, and in turn GAVI promised to spend $5 million to buy doses of the vaccine once it’s fully licensed. GAVI, however, stated that no price has been set yet.

So far, Merck has provided the vaccine for free and supplied about 153,000 doses to the WHO for use in Congo – during last year's Equateur outbreak and the current one.

Merck has pledged to make the vaccine available to the world’s poorest countries (58 that are GAVI-eligible) at the “lowest possible, not-for-profit price”. Nevertheless, the production costs are unlikely to be disclosed and could vary tremendously depending on how they are calculated.

The lack of transparency surrounding the production costs and public money involved in the investment isn’t just an issue for this vaccine.

In May, the WHO’s World Health Assembly adopted a resolution to improve transparency in the pharmaceutical market. An earlier draft had called on states to take practical measures to disclose research and development costs, but this was opposed by Britain, Germany, Japan, and the United States, according to a statement by MSF.

“This plays into the hands of companies who hold all the power around the negotiations on price and supply,” said Katy Athersuch, a policy adviser at MSF who attended the negotiations. “Enough of the secrets; let’s have an evidence-informed conversation about who paid what.”

Merck successfully completed Phase III clinical trials on the vaccine – usually the last phase before licensing and commercialisation – in 2016. It submitted a request in November 2018 for a licence to the US Food and Drug Administration, but that could take another year before approval.

Outside of the transparency issues, there is an additional issue of how genetic materials are extracted and used – and the consent and rights that should be attached.

The strain of the Ebola virus in the first known outbreak in 1976 is named “Mayinga” after a 22-year-old nurse, Mayinga N'Seka. She died but samples of her blood were sent to laboratories around the world.

“They come and they take [samples], you don’t even know about it,” said Muyembe, the virologist, in an interview with TNH last year. No agreement was made with then-Zaire for research to be conducted on the samples, he pointed out.

A few months ago, the Telegraph and Le Monde reported that tens of thousands of samples had been exported from West Africa during the Ebola epidemic and are now used for research in labs around the world. Some of the viruses isolated from the samples fetch more than 3,600 euros for 0.5ml, reportedly to cover the cost of their production. Yet none of that money makes its way back to those in whose blood the virus’ genetic material was found.

Since October 2014, countries that are parties to the Nagoya Protocol can no longer remove genetic resources without first negotiating with the countries from where they originate, and must communicate with the indigenous and local communities to obtain their consent. Benefits derived from the genetic resources must be shared. Canada, Russia, and the United States have not signed the protocol.

In the current epidemic, all the samples remain in DRC. “We have the capacity to do all these tests,” said Muyembe, “even full genetic sequencing.”

“It’s a great contribution of DRC to this global problem,” he said, pointing to the vaccination campaign underway. “We are really in an experiment, a great experiment – that’s what’s happening right now in DRC.”

(TOP PHOTO: Protective equipment during the 1976 Ebola outbreak in what was then Zaire.)