This article is part of our in-depth coverage. Read more like this...
BUTEMBO, Democratic Republic of Congo

The World Health Organisation adapted its vaccination strategy on Tuesday to try to contain a spiralling outbreak of Ebola in northeastern Democratic Republic of Congo, where deaths have soared passed 1,000 as response teams continue to be met with violence and distrust.

Conflict and disruptions, such as clashes in the town of Butembo on Tuesday, have long complicated the response in affected North Kivu and Ituri provinces, but Tuesday’s announcement was the first move by the WHO to rethink its strategy.

In a statement, the WHO’s panel of experts announced that a wider group of “tertiary” contacts would now be vaccinated and said it was reducing dosages to allow for this due to concerns over “a potential vaccine shortage” if the outbreak expands. The panel said it was particularly worried that “a large proportion of new cases continue to arise among unknown contacts”.

"[The attacks] are almost every day. It disrupts our operations, and when operations are disrupted, the virus gets a free ride."

Ebola response operations in Butembo – one of the epicentres of the outbreak, which erupted last August and is now the second deadliest ever – were briefly suspended on Tuesday when police fired warning shots to disperse crowds after motorcycle taxi drivers clashed with security personnel.

It was just the latest in a string of more than 100 attacks and violent incidents involving Ebola responders since January, many of the latest involving taxi drivers, who have said they sometimes feel more at risk due to the nature of their job.

Last month, a Cameroonian doctor with the WHO was killed in the most high-profile attack to date – at a university hospital in Butembo.

"I’m profoundly worried because the number of cases increases with the frequency of attacks," the head of the WHO, Tedros Adhanom Ghebreyesus, said in an interview with the British scientific journal Nature before attending the doctor’s funeral on Saturday.

"[The attacks] are almost every day. It disrupts our operations, and when operations are disrupted, the virus gets a free ride."

A toxic mix of mistrust, politics, and conflict has made it especially difficult to control the outbreak in Butembo and nearby Katwa in North Kivu province. Some have even voiced fears that the disease could spread to the major city of Goma or into neighbouring countries.

As attacks and interruptions have increased, so have infection rates, with confirmed cases approaching the 1,600 mark. Many people are now reportedly staying away from treatment centres even if they have symptoms.

The WHO’s Strategic Advisory Group of Experts, or SAGE, recommended major changes to the so-called ring vaccination programme, the central plank of the response, which involves tracing all known contacts of suspected Ebola cases and vaccinating their immediate contacts.

“I will work with the teams to ensure the recommendations are implemented as soon as possible,” said Professor Jean-Jacques Muyembe, director-general of Congo’s National Institute for Biomedical Research.

Among the recommendations: more pop-up vaccinations at health facilities so people on the move can be protected more quickly; more geographic campaigns to vaccinate entire villages or neighbourhoods; a wider campaign to vaccinate more people who may have come into contact with those infected; more vaccinations for those considered at high risk for other reasons; use of an experimental vaccine on other lesser risk cases.

“The need for ongoing communication efforts is obvious and investment in social sciences is needed to understand how trust can be built.”

SAGE also advised cutting the dose for high-risk patients in half and for lower risk patients to one fifth of current levels. While suggesting these moves could help speed up the response, it also said it was a necessary step to ensure there was enough vaccine “in the mid-term”.

Finally, amid growing concern over the deterioration in trust with local people, the panel proposed “a mass communication campaign” targeting “community knowledge, attitudes and behaviours regarding Ebola”, and noted: “The need for ongoing communication efforts is obvious and investment in social sciences is needed to understand how trust can be built.” 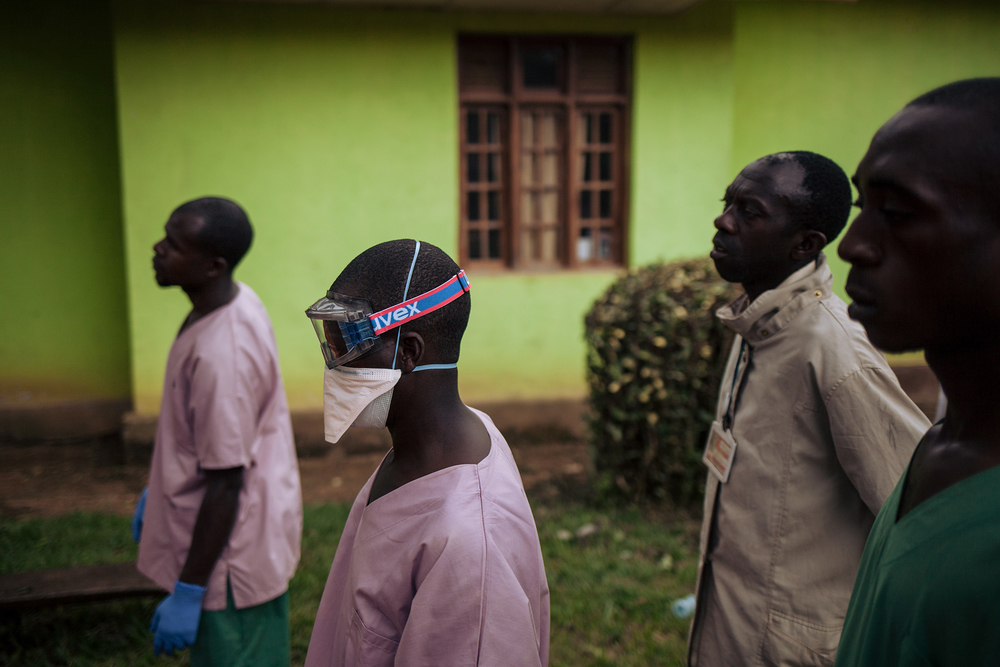 Part of this mistrust has come from rumours spread on social media sites that the disease isn’t real or that treatment centres will only make people sicker.

Maurice Nzondero, a motorcycle taxi driver in Butembo, is one of the disbelievers.

“When the Ebola virus disease manifested itself in other regions, we saw a multitude of people who died with the symptoms of this disease,” he told The New Humanitarian. “But visiting Butembo’s Ebola treatment centres in the area, you will find that no patient displays these signs. What proves that this disease exists? We think it is more of a plan to eliminate the local population.”