The events of 5 December in Bangui, Central African Republic (CAR), unleashed a wave of violence in which more than 1,000 people have since been killed. This week Amnesty International said all sides in the country’s conflict had committed war crimes and crimes against humanity. Releasing a report on 19 December about worsening atrocities in CAR, Human Rights Watch said, “The brutal killings are creating a cycle of murder and reprisal that threatens to spin out of control.”

What follows is the first-hand account of that day by IRIN’s correspondent in Bangui.

For several days there had been rumours of an imminent attack on the town by anti-balaka*, which is what happened on 5 December: another long day, another day of anguish, the beginning of a descent into hell.

4:00am: The sound of heavy guns and automatic weapons begins to echo. Friends from all over call me to ask the same question: “Can you hear the shooting?” “Yes,” I reply. “What’s going on?” “No idea,” I say.

I try to call a few people I know in the army to get some information but, oddly, almost all their phones are off.

At home, panic breaks out. I try to maintain my usual sangfroid, but relatives who are staying with us are visibly afraid. One woman keeps repeating: “Oh God! Where will I go now with the children?”

No doubt she is still traumatized by the shooting that broke out a few days ago here in the Sica 3 district after the killing of a judge by the ex-Seleka.*

She is a cousin, and I have put her up for almost two months. The Seleka came to her house in Bimbo, 25km southwest of Bangui, one night in August and tried to rob her. She stayed first with one of my brothers and then moved into my house.

6:00-7:00am: Hours go by and the shooting continues. Still no information, and the worry mounts.

8:00am: A friend calls to tell me the anti-balakas have arrived in Gobongo, a district in the north of Bangui. I call a friend there who confirms the news.

“There are many of them. They killed three people, a Muslim woman and two Muslim men whose bodies are still on the road. People are being told to stay indoors and wait; reinforcements would come at midday,” she said.

Then I call to other friends in north Bangui who tell me the same thing. Both say they are stuck at home because of the shooting and that they can see the anti-balaka through the window.

From time to time, people in our little street go outdoors to see what’s going on along the main road, but they soon come back running because there are ex-Seleka there shooting into the air.

So we are stuck in the house, not knowing what to do or where to go, much less how to get there. This was particularly important for me as I absolutely had to go out to join my journalist colleagues to work.

10:00am: I call Abdel, a friend and co-worker. We have known each other for about a year, ever since a major Seleka offensive on Bangui. He has been working as a driver for me and a few other journalists who have come to Bangui to cover this crisis.

Yesterday Abdel went home with his car. Without it, we can’t move around town. So I call him to tell him to pick me up so we can meet the others. He tells me there is shooting even where he lives, in the north of the city, so he cannot possibly leave. If he tries, he risks having his car taken.

1:00pm: Abdel finds a solution. He calls an ex-Seleka officer who agrees, for a sum of money, to escort us to the hotel where the journalists are staying.

2:00pm: A car horn sounds outside my house. I open the door to see two pick-up trucks filled with ex-Seleka as well as Abdel’s small car with a woman and children inside. Taking a few clothes and personnel effects, I say goodbye to my guests and hop into Abdel’s car.

Our first stop is Kilometre 5, where many of Bangui’s Muslims live. Abdel says he wants to take the women and children there because they don’t feel safe where they live, in PK 11, a mainly Christian district. Abdel feels the same way himself and that morning evacuated his family from there.

In Kilometre 5, things are heating up. There are angry young Muslims armed with sticks, knives and machetes walking down the main road and gesticulating. Through the car window I see a body on the tarmac. We turn off the main road and the youths follow us. We stop and they surround the vehicles and started talking in a friendly manner with the ex-Selekas.

Displaced people taking refuge in hangars where old planes are stored at Bangui M'Poko International Airport, located 7 km northwest of Bangui, the capital of the Central African Republic. An estimated 108,000 people were staying in 30 locations across Ba 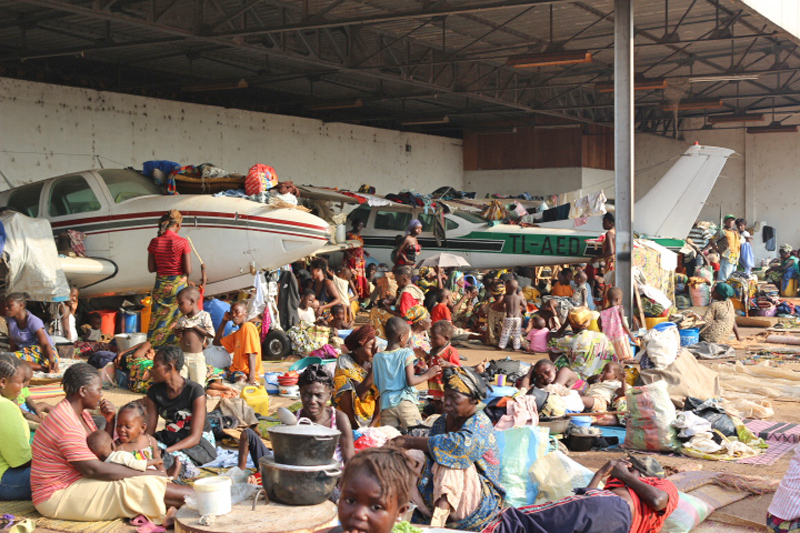 The Muslim family get out of the car and enter a building. Abdel waves me to come toward him. It’s when I get out of the vehicle that I realize that I have crucifix hanging from my neck. I walk through the group of youths, who look at me and greet me amiably. My fears evaporate.

I approach one of the pick-ups and greet a certain general, who is talking with Abdel. Abdel says, “Crispin, do you have any money?” I pull some notes out of my pocket and hand them to Abdel, who passes them to the general. After that, we get into the car and, followed by one of the ex-Selekas’ pick-ups, drive to the hotel to meet our colleagues.

One the way, we see many people, mostly women, with bundles on their heads and holding children by the hand, quickly walking south. The exodus from the northern districts was beginning.

Friday: The next day, we venture out into town and grasp the extent of what had happened the previous day. Many bodies lie on the roads and avenues close to the hotel. The bodies are clearly those of anti-balaka because they are covered in charms.*

The bodies will stay there for several days, until the Red Cross collects them.

Saturday: We follow a team that left the largest hospital in Bangui and went to the 36 Villas district. There, on the grass in front of just one property, lie the bodies of around 30 people. I have never seen anything like it, never realized how far human barbarism could go. Nearby, a dozen ex-Selekas keep watch in front of a house. One by one, the Red Cross team picks up the corpses and puts them in body bags and places them on the back of a pick-up. We go back to the hospital, to the morgue, to find - to my horror - hundreds of bodies piled up, even on the floor. In all my life, I have seen nothing like this. That night, after returning to the hotel, I go straight to my room without eating anything.

*Anti-balaka means “machete-proof”, an invulnerability attributed to rituals and charms; it is the generic name for militia forces opposed to members of the officially disbanded, but still very active, Seleka alliance of rebel groups that overthrew president Francois Bozizé in March. The ex-Seleka is predominantly made up of Muslims while the anti-balaka tend to be animist and Christian.